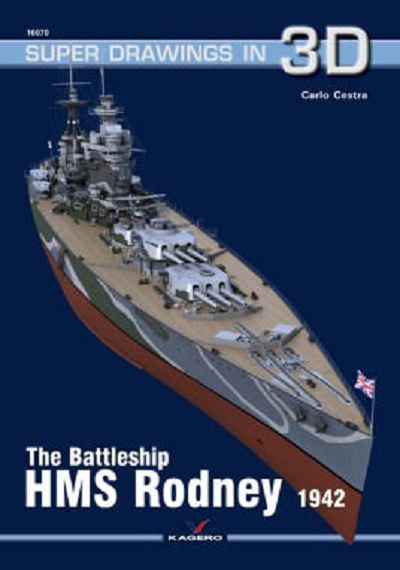 HMS Rodney and HMS Nelson were the only battleships of the Nelson class. HMS Rodney was built at Birkenhead Shipyards. She was launched on 28 December 1923, took to the sea on 17 December 1925 and was commissioned in November 1927. three months behind Nelson.

Her name was received in  honor of Admiral Sir George Brydges Rodney. She fought her entire career under the motto "Non generant aqilae columbas" ("Eagles do not breed doves").

The engineers found the perfect balance between size, armoring and armament, paying attention to achievable speeds. Her design was particular because the ship housed all the main armament towers at the bow, instead of having them distributed in the bow and stern, as it was then in use.

It had a displacement that did not exceed 35,000 tons, respecting the Washington Treaty of 1922, Rodney and Nelson were two of the most powerful battleships then existing, until the new generation of all big gun ships was launched in 1936.

HMS Rodney and HMS Nelson were the only British battleships to have trimmed towers, the only ones to carry 406 mm (16 inch) guns, and the liquid loaded bulkheads under the waterline.

This book comes in a self-sealing clear cello envelope.

It contains a pair of paper glasses with one red lens and one blue lens. To use to view the illustrations in 3D.

The front and back covers have a color illustration of the Rodney viewed from the bow and stern. It is overall grey with a white and red squiggle pattern down the sides of the hull and a tan deck.

The book contains 160 color 3D illustrations that are the walk-around type showing every inch of the Rodney's anatomy and her launches and biplane.

There is a black and white line drawing plan that is 19" x 26" format.

It is folded 3 times to fit the book.

This is a neat book on the Rodney. It will be of great interest to modelers and aviation historians and enthusiasts alike.

I want to sincerely thank Casemate Publishers, the N.American distributor of Kagero books and the folks at Kagero for this review sample.

All Kagero titles can be viewed on Casemate's web site at:
www.casematepublishers.com