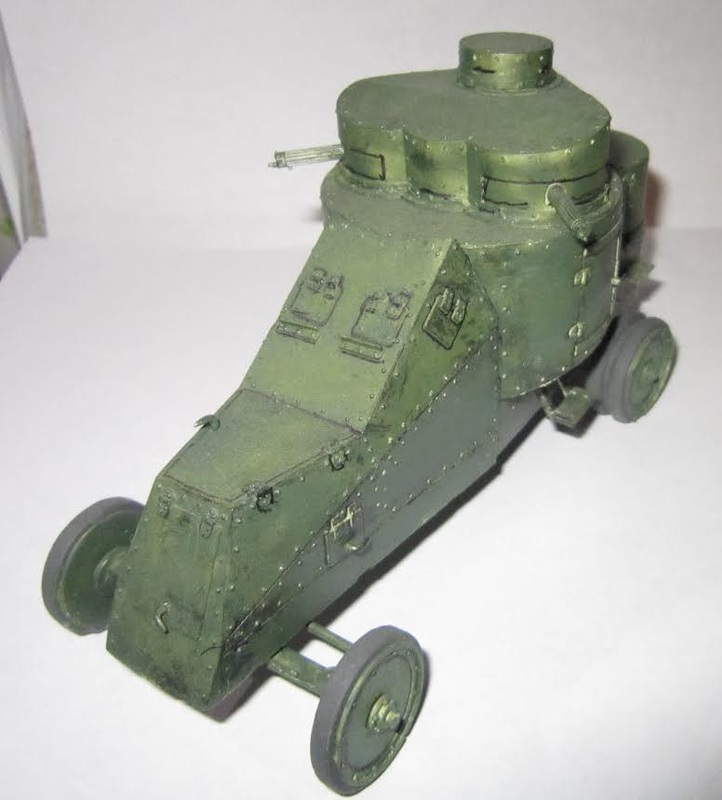 Only one “Izhorski-White” was built by the staff-captain of the Military Automobile School (in Petrograd), Vladimir Mgebrov. The chassis was that of the American 1.5 ton truck “White TBC” (standard B truck). Only three photos of it are known – one in Izhorski-Work in Kolpino and two in service.

These armored cars were attached to the 29th Machine-Gun Platoon by September 17, 1915 – the Automotive Intelligence team. On 21 November they joined the Caucasian Army HQ in Tiflis. In the summer of 1916, some returned to Petrograd for repairs and were sent back in operations, but their fate after 1917 is unknown.

The Russians dropped out of WWI late in 1917 to fight each other. During their involvement in the war, from 1914 to 1917, armored cars were very popular and lots of different kinds were designed and built. Cars had an easier time dealing with the extremes of Russian weather conditions. These cars soldiered on during the Polish – Soviet “War of Independence” (1919-1920), many were captured by the Poles and continued to be used until the late 20’s. The Poles won that war and became the only nation to have ever outright defeated the Soviet Army.

The Mgebrov-White armored car was built in 1915 as a one-off vehicle. Mgebrov was a Staff-Captain in the Russian Army at that time. The vehicle carried one Hotchkiss main gun and two Maxim machine guns. The later Mgebrov designs were a bit smaller and had a steeply sloped front end. They also eliminated the rearmost turret. There is evidence that the one – and only – Mgebrov-White was used up until 1918.

I want to take the opportunity here to thank Karen Rychlewski (who is very knowledgeable or early armored cars) for providing the information to me for the above brief history.

This kit comes from a manufacturer in the Ukraine. Although it is called a resin kit, the material it is made out of is very soft and chalk-like. Sanding it makes a lot of powder and you have to go super-gentle with the sanding sticks. I contacted the owner of The Tank Master, who sent me the review kit, and questioned him about the strangeness of the so-called resin. He said that Major Models used a slurry of some kind of auto body putty to mold their kits (like our BONDO??).

Anyway, the kit’s main parts are out of this material and the smaller detail parts are in white metal. In white metal you get: the main gun and its side shields, door and hatch handles, the 2 Maxim machine guns, the foot steps below each door and the rear turret, the 2 plates just below the forward vision flaps and the front axle.

I assembled this kit completely with the obligatory super-glue. Surface air bubbles were only encountered on the bottom of the hull and around the edge of the wheel rims. The ones on the wheel rims were impossible to fix, so I left them as was (battle damage?).

I posed the rear turret at an angle to the rest of the car. The rear axle had the most flash on the resin part and took the most time to clean up. This kit was a fast build and easily a weekend project. I painted the vehicle in overall Russian armor green acrylic and dry brushed it with lighter shades of green. I used a very fine pointed Sharpie permanent black ink pen to outline the doors and hatches. The guns were painted with gun metal acrylic and given a black wash

Soviet armored cars did not display any markings 90% of the time and no decals are given in the kit.

This is a real salty and ugly armored car. It will be welcome to WWI armor modeler’s collection and is an ideal first resin kit for the novice (However, as said earlier, it is not really resin). 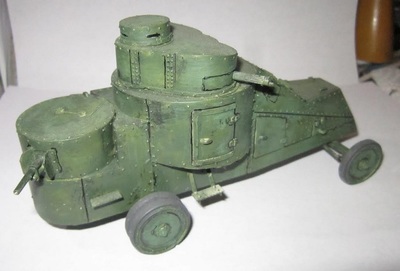 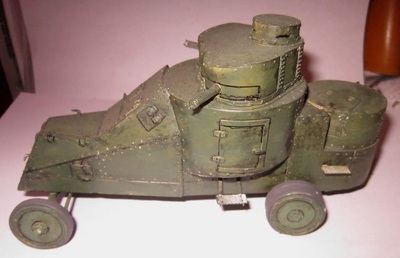