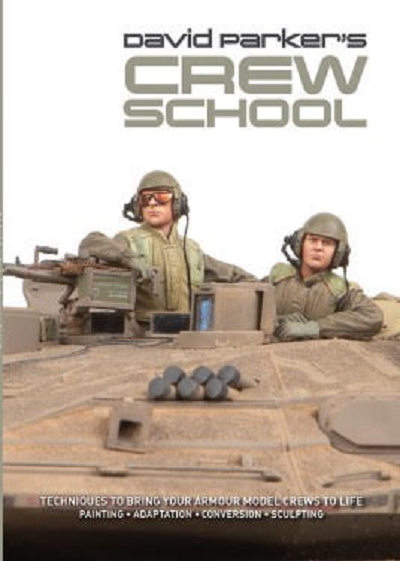 Techniques to Bring Your Armour Model Crews to Life

Publication date:  February 20, 2020
​Possibly the biggest barrier to the modeler using crew figures is the idea that “I cannot paint faces”. Over the years It has been a struggle with establishing a consistent technique that could be employed without the process becoming a fight with consequent variable and unpredictable outcomes.

The author of this book has developed for himself what he thinks is a quick and simple approach which gives a realistic result with a small palette of colors using simple paints.

For the novice face painter it can seem to be a daunting process, with the smallest touches of the wrong color resulting in an apparent startled expression on the face of the serious Panzer commander that you are trying to model. Before beginning to ever consider paint it is well worth paying attention to the quality of the face that you are trying to bring to life.

If you start by trying to paint a 1970’s injection molded crew figure, you will have soft, poorly defined facial features which will simply make the whole process far more difficult. Conversely, if you start with a well sculpted resin head as your canvas, you will be working with crisp definition and well defined details which will make the process far easier an inevitably give you a better result.

As a good rule of thumb, always replace your crew heads with a resin replacement when possible. This book looks at how to replace heads at the later stage, but first the book examines basic face painting process.

AFV books is based in the UK.

It contains 370 color illustrations. Mostly as the walk-around type.

The cover art has a color illustration of a Israeli Merkava tank with 2 crewmen looking out the top of it.

The book starts with a color photo of a diorama of a Panther tank in a grassy field with 4 crew-men standing atop it.

Another color photo shows the author David  Parker looking out the top of an unknown tank.

for face painting. Including Canadian tank crew man looking out of the top of an unknown tank.

Two Soviet crewmen atop an unknown tank in 3 color photos.

In the Strike a Pose chapter there are 10 German tank crewman atop a Tiger tank.

The Switching for Effect chapter has 18 color photos of German tank crewmen atop a Pz.Kpfw. IV tank  The man in the cupula has his left arm raised and a second man is sitting in the turret side hatch.

The Creating Creases chapter has 7 color photos of shirts.

The Armed and Dangerous chapter has 19 color photos of Israeli crewmen with a Merkava tank.

The Holt Who Goes There? Chapter has 17 color photos of the Holt steam powered tractor pulling an unknown cannon in a diorama.

The One Step Beyond chapter has 9 color photos of German tank crewmen on a Tiger tank.

The Working With Mannequins chapter has 29 color photos of German tank crewmen.

The Panther Personnel chapter has 11 color photos of Panther tank crewmen atop Panthers.

The Charm Offensive chapter has 11 color photos of French tank crewmen talking to girl next to a Samoa tank.

The Shell Stinger chapter has 18 color photos of a German tank crewman throwing a spent shell out the turret side hatch on a Panther tank.

The Ardennes Advance chapter has a whopping 65 color photos of a diorama of Pieper in a Schwimmwagen parked next to a road sign in the Ardennes. This is copying a well known wartime photo that shows this scene.

The last page of the book shows the cover art of the AFV book on the German BMW  R75 motorcycle.

All these color photos in the book are of models.

I want to sincerely thank Casemate Publishers, the North American distributor of AFV books for this review sample.

All AFV titles can be viewed on Casemate’s web site at:
www.casematepublishers.com