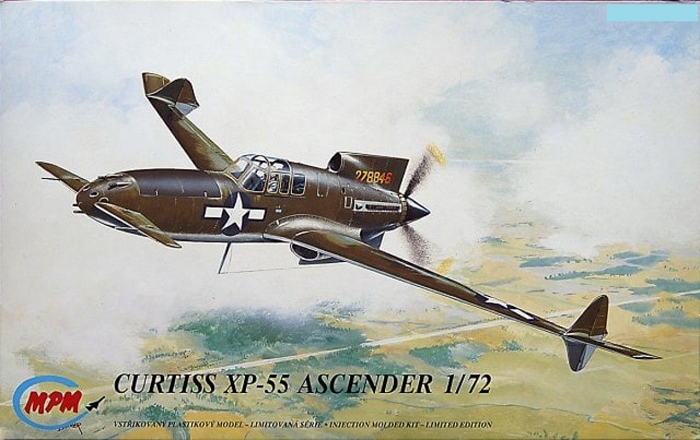 I got my kit in trade with a modeler in Warsaw, Poland years ago.

A highly unusual design for its time, it had a canard configuration, a rear-mounted engine, swept wings, and two vertical tails. Because of its pusher design, it was sarcastically referred to as the "Ass-ender". Like the XP-54, the Ascender was initially designed for the Pratt & Whitney X-1800 engine and had to be redesigned when that engine project was cancelled. It was also the first Curtiss fighter aircraft to use tricycle landing gear.

MPM is based in Prague, Czech Republic.

The kit came in a flimsy, badly-crushed shrink-wrapped end opening type box. I am no fan of this type of box, because invariably parts or the decal sheet will find it's way past one of the end flaps to become lost forever. Give me a tray and lid type box any day of the week.

The box art shows a XP-55 flying above the clouds. It is dark olive-drab over a neutral-gray undercarriage. It has a black spinner and propeller blades with yellow tips. The serial number on the rudder sides is a white 278846. It is the second prototype USAF 7X, 1944.

A side panel says the kit is a limited-run injection molded model. MPM's address in Prague and MADE IN BOHEMIA appear.
​WHAT'S IN THE BOX:

This kit contains one pale-gray tree in a sealed clear cello bag with 2 brass PE frets and a photo negative in a stapled shut cello bag with a stiff white card, the decal sheet and a vacuformed canopy in another cello bag and the instructions.

The instructions consists of a single-sheet folded in the center to create 4 pages in 8 1/2" x 12" page form.

Page 1 has the history of the XP-55 in Czech, English and German.

Page 2 & 3 have the parts trees illustrations and 6 assembly steps.

Step 6 shows that a nose weight is needed to prevent the model tail-tipping. 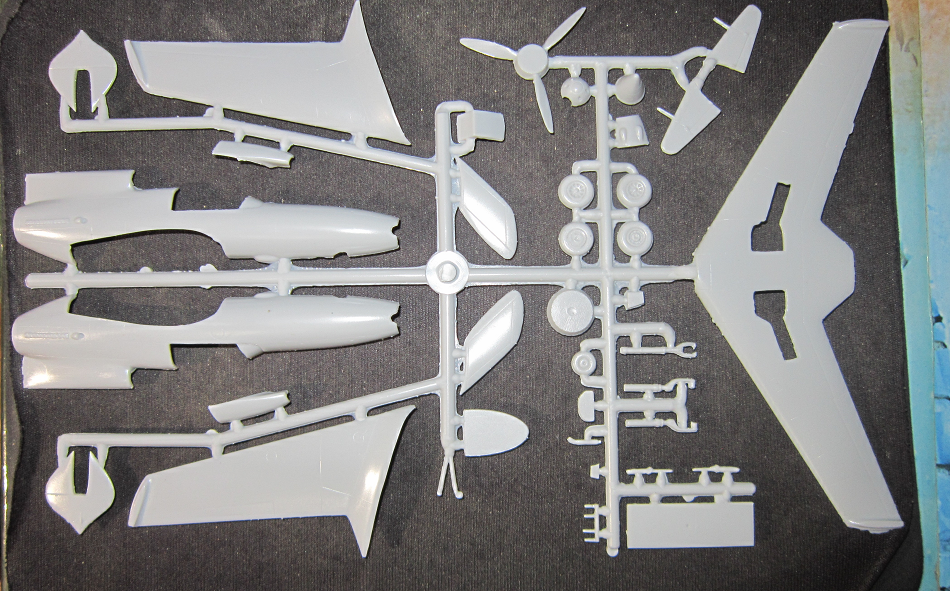 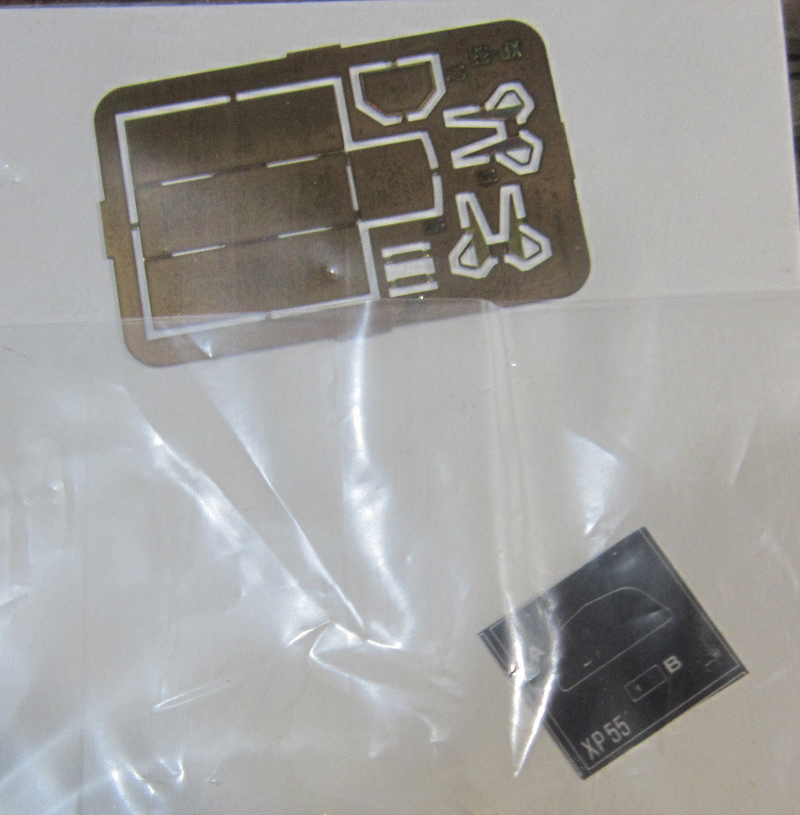 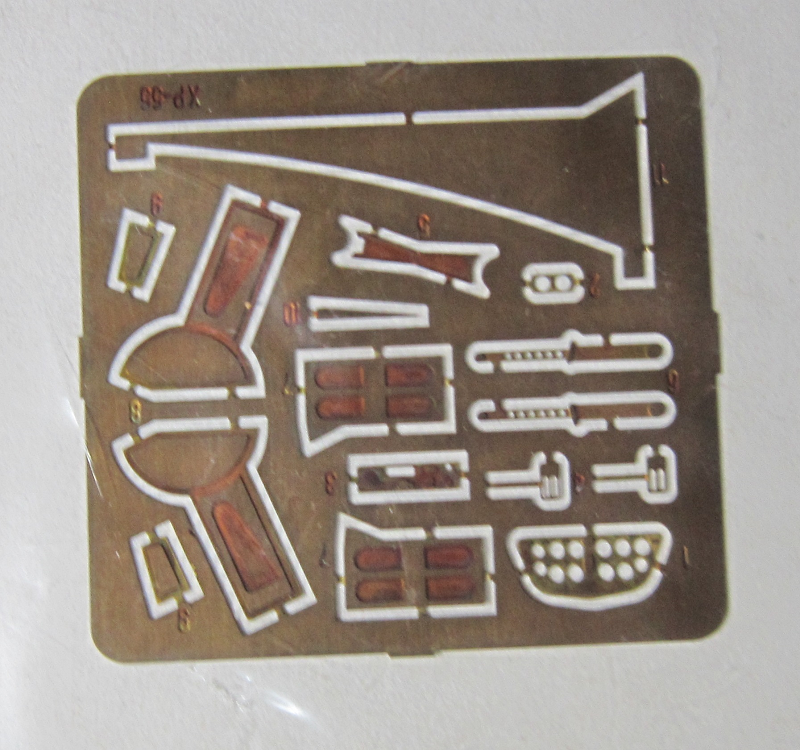 ​The clear vacuformed canopy (1 part) and the decal sheet complete the kit contents. 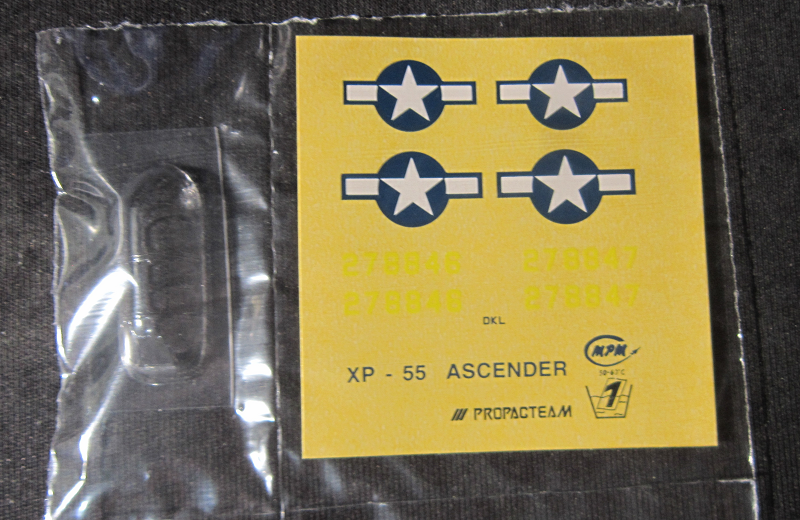 This is one neat prototypal U.S. fighter and it is highly recommended.