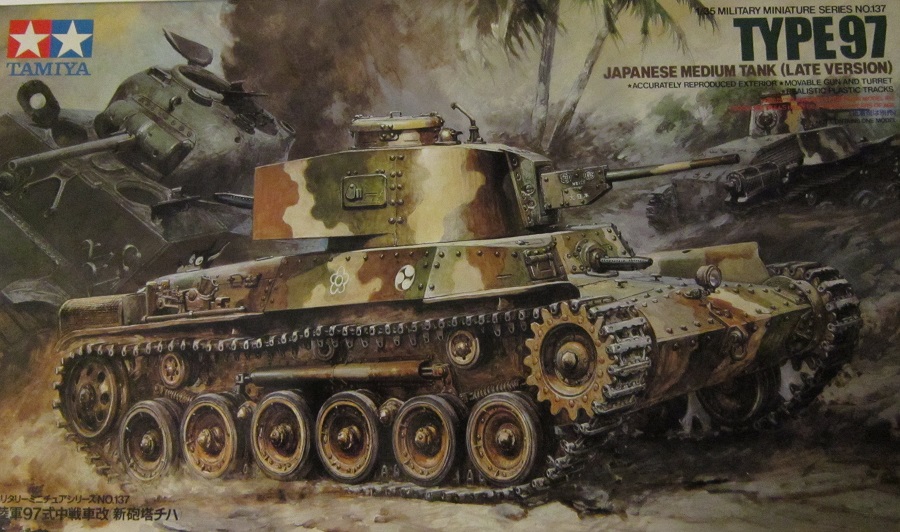 Tamiya is an older very prolific model company based in Japan. They make all manner of model subjects in the popular scales.

The Type 97 Medium tank was the main Japanese Army armored vehicle prior to and throughout WWII. The compact and well-proportioned low silhouette styling of this tank was one of the most modern seen during that era.

The Type 97 tank was initially developed for infantry support and was armed with a 57 mm type 97 main gun and carried two 7.7 type heavy machine guns as secondary armament. It soon became apparent that the armor thickness and main gun capability was not sufficient for anti-tank warfare.

In consideration of its anti-tank role later in the confrontation, a modified version, Type 97 tank was produced mounting the much improved 47 mm gun in a new larger turret designed to accommodate the long-barreled high-velocity gun. The power plant was an air-cooled V12 cylinder diesel engine providing a maximum output of 170 hp, while the suspension incorporated a see-saw type bogie system that provided excellent mobility on the battlefields.


This late version of the type 97 tank, using the more powerful 47 mm gun, first appeared in May 1942, when it took part in the invasion of Corregidor, Philippine Islands. It thereafter fought throughout the conflict on all fronts.

The box art is not one of Tamiya’s signature ones of the model subject posed against an all-white background.

It shows 2 type 97 tanks passing a knocked-out Sherman tank in a jungle setting.

The tank in the foreground is in a wave pattern of earth, dark red brown and dark green. It has 2 white symbols on the side of the hull. One looks like a flower that is done in outline form. The other symbol is a white circle with a whirl-a-gig in the center. There are several Japanese characters on the side of the base of the main gun.

This is a vehicle with the 7th Tank Regiment, Luzon Island.

One corner of the box art says the kit has an accurately produced exterior, movable gun and turret, realistic plastic tracks (however, they are NOT plastic. They are vinyl rubber-band ones), the kit is intended for modelers over 10 years of age and the box contains just one model.

One side panel has a color 4-view of a vehicle with the 8th Tank Regiment, that is in the same wave pattern as the box art subject.

This is followed by a 1987 copyright date for the kit and Tamiya’s street address in Shizuoka City, Japan.

The other side panel has a color top view of a Type 97, followed by what I think is the history of the vehicle in Japanese and the color box art of kit no. 35075 which is another boxing of the Type 97 with a banister aerial on top of the turret.

MADE IN JAPAN is said here and Tamiya’s address is repeated.

A black and white sticker on the end of the box has Model Rectifier Corp’s address in Edison, New Jersey, who was the U.S. importer of Tamiya’s kits years ago.

The instructions consist of a single sheet that accordion-folds out into 6 pages in 8” x 11” page format.

Page 1 begins with a black and white photo of the model made up in markings for the 1st Tank Regiment. This is followed by the history of the Type 97 in 8 languages, including English.

Page 2 begins with READ BEFORE ASSEMBLY instructions and a paint color listing in multiple languages (including English).

Page 2 through 5 give a grand total of 8 assembly steps.

The bottom of page 5 has painting instructions in Japanese, English, German and French.

Page 6 has the decal application instructions in the same 4 languages.

Also on this page are 6 side profiles for 15 marking options. All are in the khaki, dark red-brown and dark-green wave pattern.

There is one scheme that is the box art one for a vehicle with the 7th Tank Regiment.

There are 3 markings called out for tanks in the 1st Tank Regiment.

One marking for a tank of the 5th Tank Regiment.

5 markings for tanks with the 9th Tank Regiment, Saipan Island.

One marking for a tank with the 10 Tank Regiment, Luzon Island.

One marking for a tank with the 11th Tank Regiment, Kuriles. 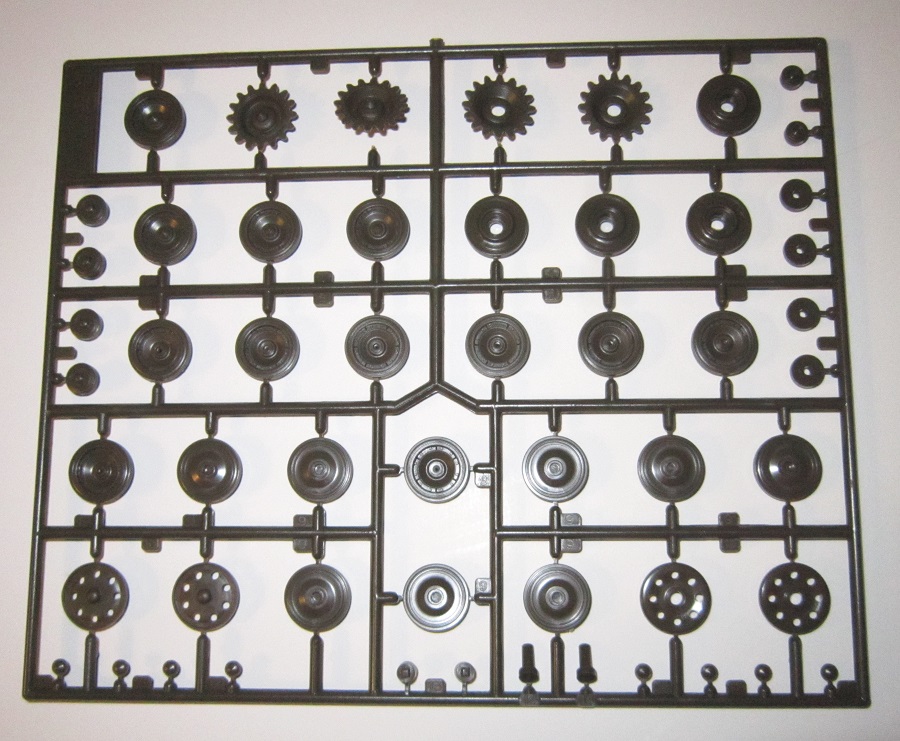 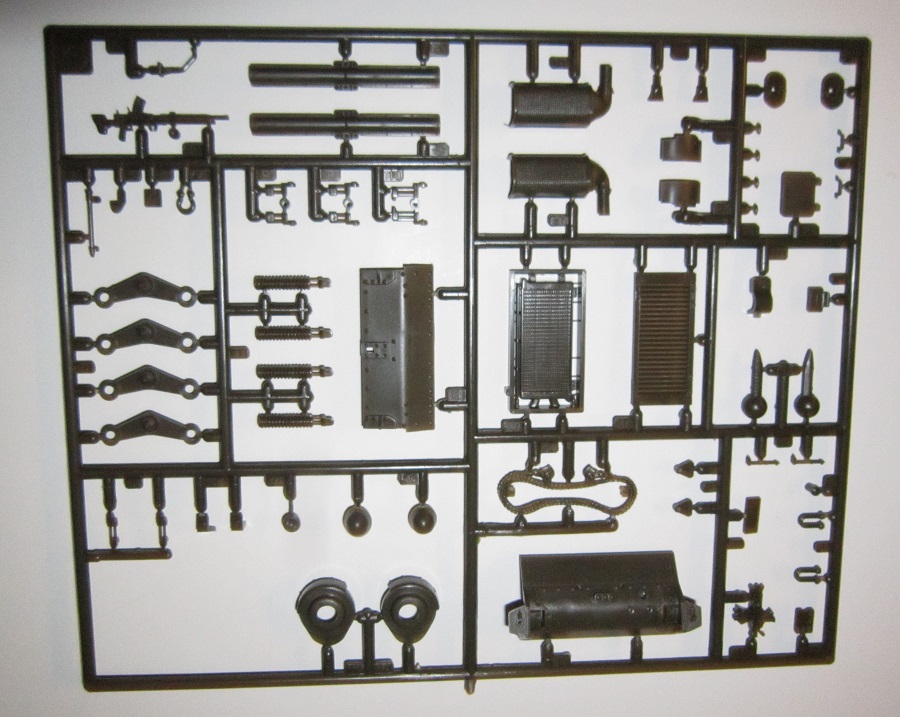 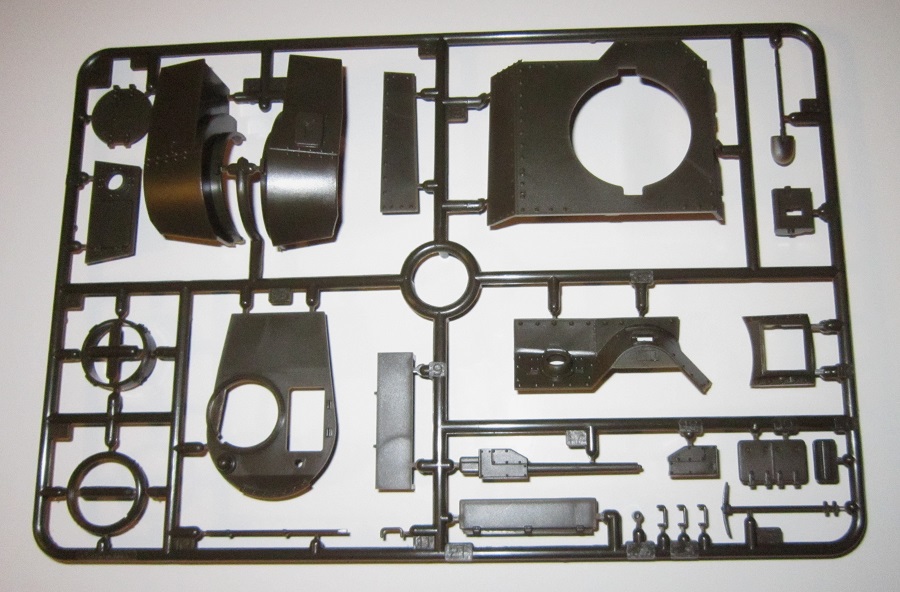 The 8 black vinyl poly-caps are next, followed by the black vinyl rubber band treads and the decal sheet. 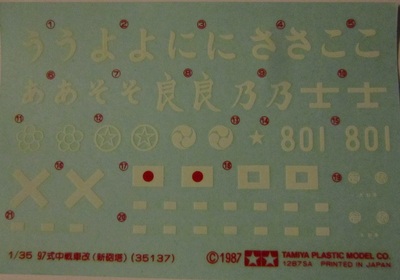 The upper and lower hulls

There is a color catalog of Tamiya model kits and one for Tamiya paints in the kit.

There are no crew figures or clear parts in the kit.

I am going to add one of my MV brand lenses to the single head light.

I also bought a set of Model-Kasten brand individual track links to replace the rubber band ones. There are 50 trees in this set that each hold 4 links, for a grand total of 200 links.

There is no interior details in the hull or turret. 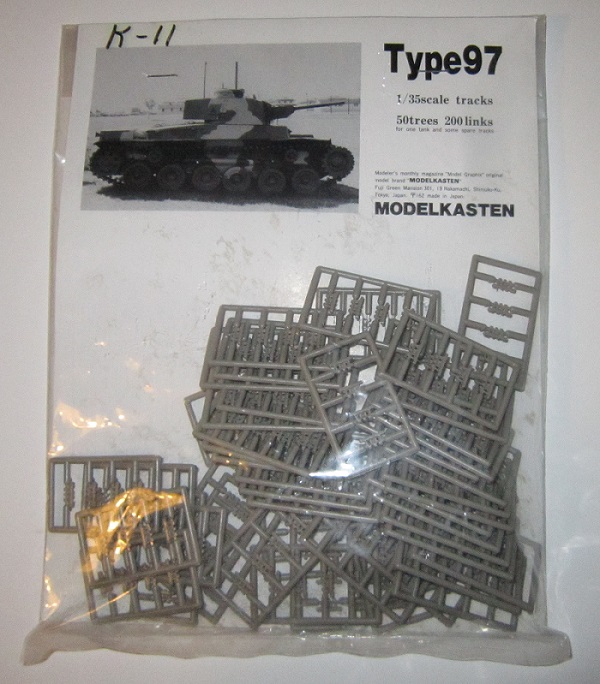 I recommend this model to modelers of average modeling skill.

Tamiya re-releases their kit subjects and this model may yet appear again.