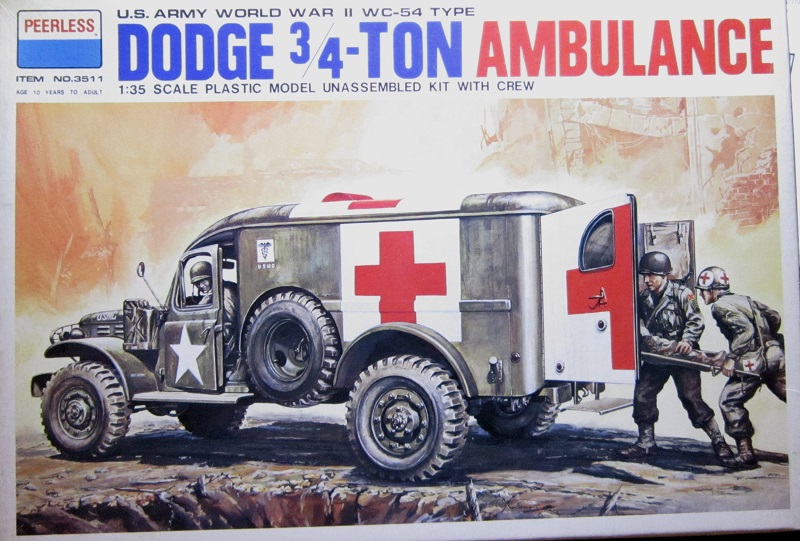 The Dodge WC-54 was the standard U.S. field ambulance during WWII. The vehicles were manufactured by Fargo Motors of the Dodge Corporation, which was affiliated with the Chrysler Corporation. Production of the WC-54’s began in June, 1942 and ceased in March 1946. The standard Dodge ¾ ton truck chassis was used along with the standard six-cylinder engine. A total of 23,000 of these ambulances were produced.

The Dodge design was based on two considerations, first, wartime conditions would not permit the production of expensive Cadillac and La Salle ambulances. Second, by altering it’s basic truck design, Dodge was able to meet the needs of all the theatres of war.

The Dodge model WC-54 was extremely successful in it’s ambulance role, and remained in service until the end of the Korean War. At that time, these ambulances went to NATO, SEATO and U.S. National Guard units. The objective of these vehicles was to withdraw wounded personnel from combat areas as soon as possible. Therefore, the WC-54 series was designed to have four-wheel drive, soft-spring suspension and a concealed steel body. In tropic climates, the WC-54’s often had air-conditioning for patient comfort.

The WC-54 standard configuration was suited to either stretcher cases (four lying prone) or walking wounded (eight seated) plus a driver and a medic, for a total of as many as ten passengers. The size of the WC-54 was thus 58cm, longer than the standard Dodge weapons carrier, and had an unfortunately high silhouette, both of which were not desirable in a combat area.

Although the U.S. Army tried to remedy the situation with the WC-64 series ambulances, the aluminum fronts and wooden bodies were so susceptible to enemy rifle fire and fragmentation that the Army gave preference to the WC-54 ambulances.

The Dodge Military Field Ambulance, Series WC-54, is widely recognized as America’s most significant contribution to the area of personnel recovery, and many men from many nations owe their health and well-being to the stamina and durability of this fine vehicle.

Peerless (sometimes called Peerless Max) was a Japanese model company that went out of business in the mid 80’s. This particular kit has a copyright date of 1977. All their Dodge molds were sold to Italeri, who later released most – if not all – of the Peerless subjects under their banner. Italeri’s kit no. for it was 226, now out of production for them – but they do re-release constantly.

The ambulance mold went to Bilek too, who still markets the kit as kit no. 994. There is a Polish site called Mojehobby who has the Bilek kit in stock.

The box art shows an infantryman and a medic loading a casualty on a stretcher into the rear of a WC-54 ambulance, while the driver looks on from the cab (the kit contains the casualty and two guys carrying him on a stretcher, but no driver figure). The ambulance is overall olive drab with a large white star on the cab doors. The white letters U.S.M.C. is on the sides of the hood (on the decal sheet this is U.S. ARMY). High on the sides above the spare tire is the medical symbol with U.S.M.C. below it (again, on the decal sheet this is U.S.ARMY). This is followed by a huge red cross marking which is then repeated covering the rear doors.

A side panel has 3 walk-around type photos of the model and figures made up in the box art scheme.

The other side panel shows the full color box arts of 4 other kits that Peerless was marketing before they folded: A Canadian Chevrolet 15 CWT truck pulling a 6 pdr gun (kit no. 3508), a British Bedford QL Truck Porter with a 6 pdr in the cargo bed (kit no. 3509), a Canadian Chevrolet field gun tractor (kit no. 3510) and a German Steyr RSO/01 tractor pulling a Nebelwerfer (kit no. 3512). I never did see the Steyr appear under the Peerless label. They also announced a U.S. military dump-truck and a Stuart tank that was never marketed eventually by them. The Steyr did come out by Italeri, years later, in both a metal cab and a wood cab version.

The instructions consists of a single sheet that accordion folds out into 8 pages of 7” x 9 1/8” page size format.

Page one begins with a black and white repeat of the box art, followed by the history of the WC-54 ambulance in English.

Page two begins with the parts tree illustrations followed by a complete listing of names of what the parts on each tree are. Very good idea and nice to know what things are.

Pages three through 7 give a total of 7 assembly steps. Actually, there are 3 assembly drawings in some of the steps, so the steps could have been numbered as 1 to 14. There are also running commentaries next to these drawings telling what to do. Nice move Peerless.

All doors can be posed open or shut. There is no engine offered to go under the hood. There is a fold-down step at the rear that can be shown folded or deployed. You get three figures in the kit: an infantryman helping a medic loading a casualty into the back of the ambulance, the casualty on the stretcher. However, the seated driver figure shown on the box art is not provided as mentioned earlier.

Page 8 gives two 4-views for a couple of marking options. Color is not called out, but – hey – everybody knows these were overall olive drab.

The first one has a huge Red Cross insignia on the roof. It covers it full width and half the length. Another large red cress insignia covers both sides of the passenger box there are plain white stars on each of the cab doors. Another red cross covers the rear doors. On top of the roof, forward of the Red Cross insignia is a white star on a blue circle. In front of that is the word AMBULANCE in white letters, bracketed by a small Red Cross symbol on either side of it.

There is a plain white star on top of the engine hood. The serial number U.S.A. 71364 appears on each side of the engine hood in white letters. On the front bumper is the numerals 91-316-M, a small Red Cross symbol in the middle and C-7 to the right of that symbol in white letters. The rear has the same numbers, minus the little Red Cross symbol this time. We are not told what outfit this was assigned to…sigh.

The second version has a smaller red cross symbol on the roof with the word AMBULANCE in front of it also, that is bracketed with little red cross symbols. There is a white star in a white circle on top of the engine hood and also on both passenger doors. This ambulance carries the serial no. U.S.A. 732145 on the sides of the engine hood in white. On the front bumper is the white lettering 82AB-X, then a small white star in the middle and 307M-21. This is also on the rear, minus the little star. Again, we are not told what outfit this was assigned to either…groan. 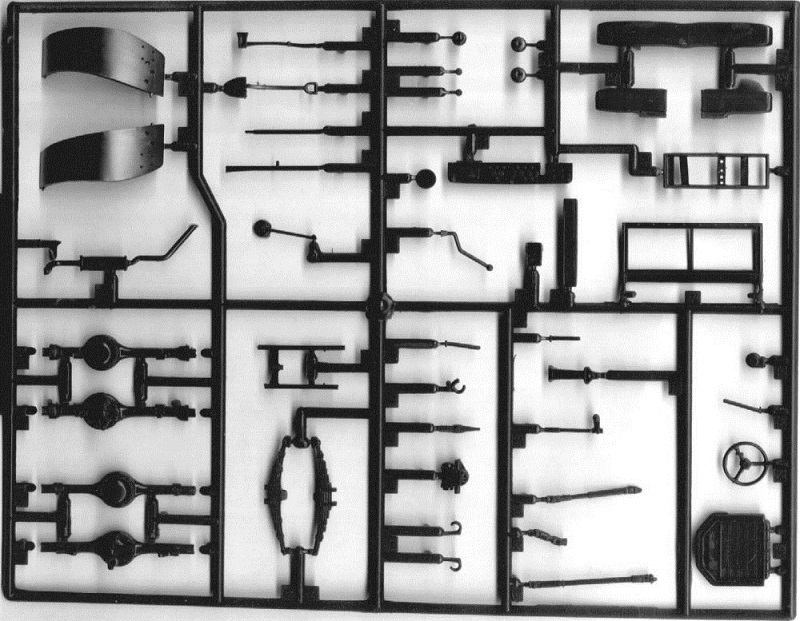 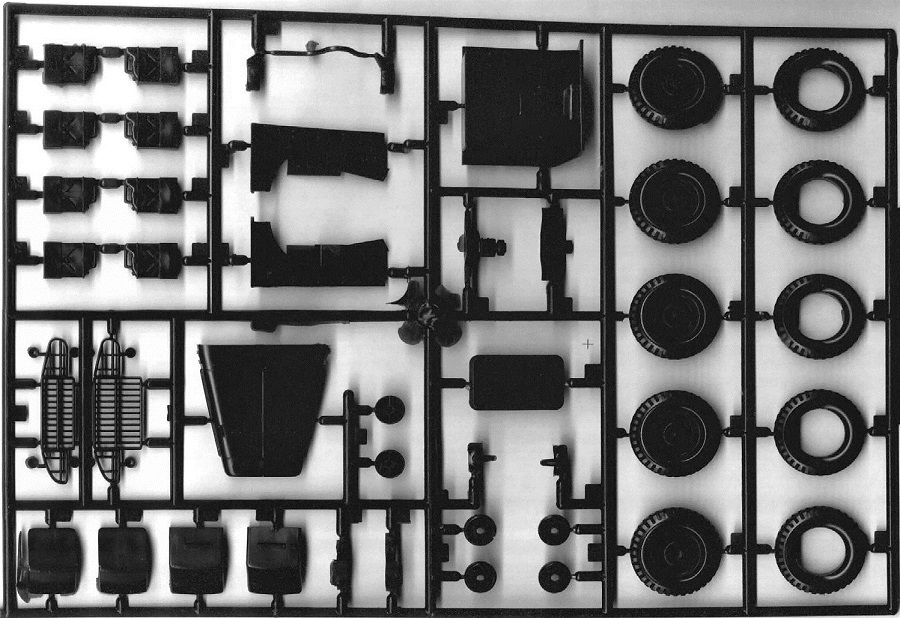 Large chalk white letter C parts tree holds: the floor, walls of the inside of the passenger box, an inner roof part, the infantryman and medic figures, fold down beds for the passenger box, dash board etc. (26 parts) The figures are divided into separate body, arms, heads and two steel helmets. There is a folding spade in carry pouch also. 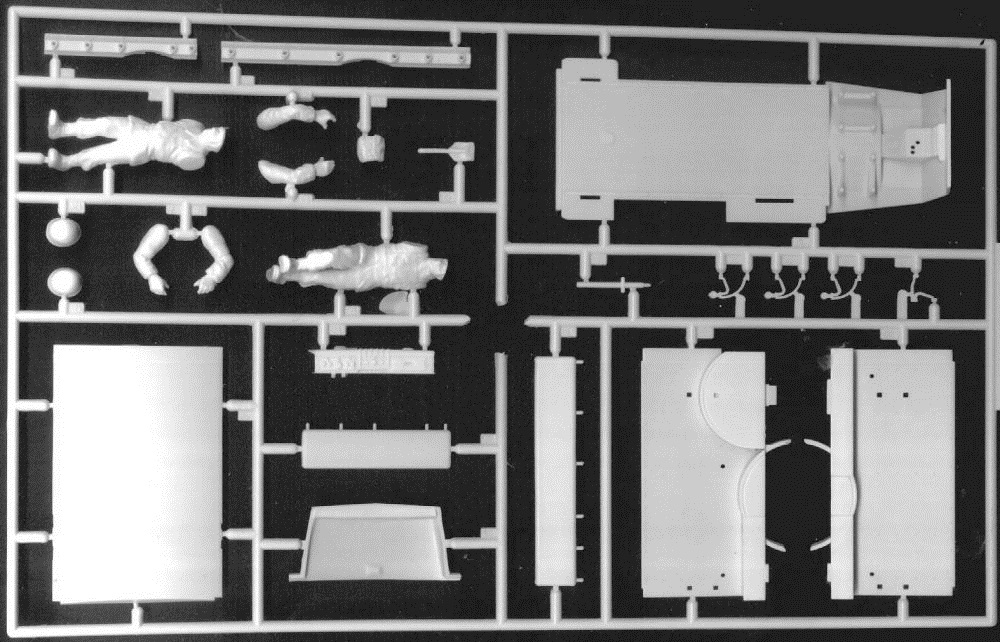 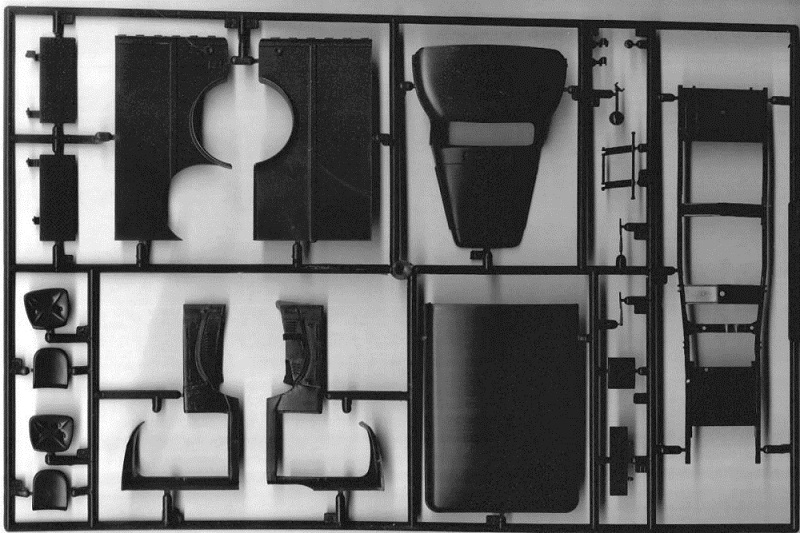 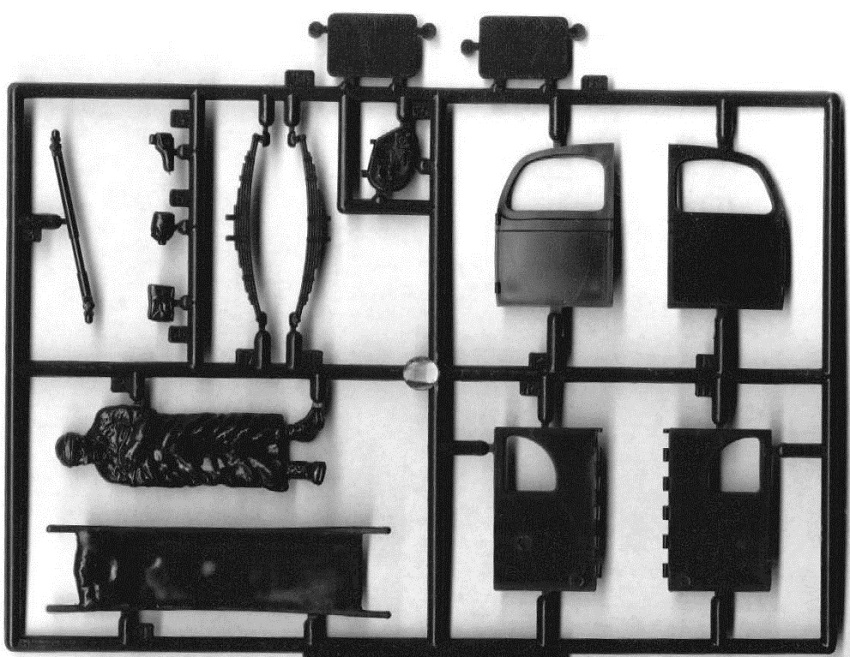 The small clear parts tree is not alphabetized. It holds all the windows. There are no headlight or taillight lenses provided (5 parts)

There are 3 lengths of brass rod in the kit. To be sandwiched into the two axle assemblies for additional strength.. You only need 2, but Peerless has provided a spare one. Nice move Peerless. 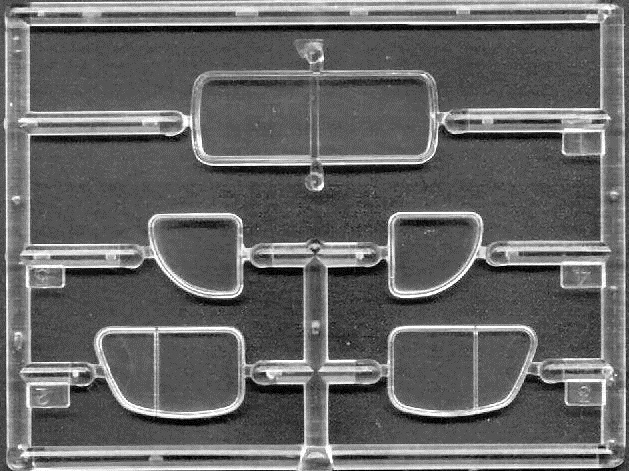 The decal sheet completes the kit’s contents. I had to play games with my scanner to get the white images on the decal sheet to appear. My scanner turned these areas kind of yellow…but….hey…at least you can see them now. Just think WHITE. 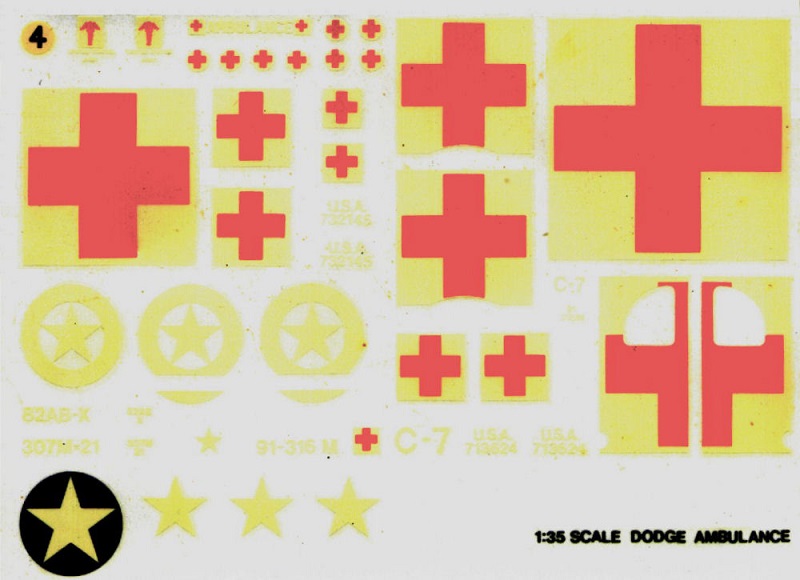 This is one neat U.S. WWII (and later Korean War) ambulance. It should find its way into a lot of collections of war-time soft-skin vehicles. The detail and molding on it set the yardstick very high back in the 70’s. Peerless, at that time, was the company to be emulated it was said.

I purchased my kit at my local hobby shop years ago. Italeri sells a model of this vehicle as kit no. 226. I only found one on the web at AMAZON and gasped at the price being asked…over 200 bucks!!! The seller is totally insane!!