OUT OF PRODUCTION
​
HISTORY:

The Bereznyak-Isayev BI-1 was a Soviet rocket-powered fighter developed during the Second World War.

Soviet research and development of rocket-powered aircraft began with Sergey Korolev's GIRD-6 project in 1932. His interest in stratospheric flight was also shared by Marshal Mikhail Tukhachevsky who supported this early work. After a long series of unmanned tests of vehicles, Korolev's RP-318-1 rocket aircraft flew on 28 Feb 1940.

That Spring, TsAGI  - Tsentralniy Aerogidrodinamicheskiy Institut Central Aerohydrodynamic Institute) hosted a conference for aircraft chief designers on the subject of ramjet and rocket propulsion. On 12 July the SNK (Sovet Narodnykh Komissarov – council of peoples commissars) called for the development of a high-speed stratospheric aircraft.

Aircraft designer and head of OKB-293, Viktor Fedorovich Bolkhovitinov attended the TsAGI conference along with two of his top engineers, A. Ya. Bereznyak and A. M. Isaev.

The young Bereznyak had made an impression in 1938 with a high-speed airplane design that some thought could break the world speed record. Bereznyak and Isaev were excited by the idea of designing a rocket-powered aircraft, and their "patron" Bolkhovitinov approved.

By the Autumn of 1940, they were able to show fellow engineer Boris Chertok a preliminary design of "Project G". The design, made up mostly from plywood and duralumin had a take-off weight of 1,500 kg (3,300 lb), and they planned to use the new 13.734 kN (3,088 lbf) rocket engine under development in the RNII ( Raketnyy Nauchno-Issledovatel'skiy Institut - reaction engine scientific research institute). Chertok was astounded that the aircraft could almost climb vertically.

The "A" stood for Nitric Acid ("Azotnokislotny" in Russian), versus K for Liquid Oxygen ("Kisloroda" in Russian), a distinction of unusual importance and controversy among Soviet rocket scientists. Dushkin's turbine propellant pump was causing considerable problems, driven by hot gas and steam from a small combustion chamber fed with rocket propellants mixed with water, but this system was perfected a few years later for the RD-2M engine.

The D-1-A-1100 was built from S54 steel (a 12% chromium alloy). At this point in time, Russian rocket engines were built with typical aviation piston-engine manufacturing technology, weighing 48 kg (106 lb), it could be broken down into discrete forged-steel sections – a conical head with 60 centrifugal injectors, the cylindrical chamber, and the nozzle – joined with bolts and copper gaskets.

It was ignited with a nichrome glow plug, later replaced with silicon-carbide and was cooled regeneratively by both propellants, the chamber walls by a spiral flow of incoming fuel (kerosene, and the nozzle section by the flow of oxidizer (Nitric Acid).

On 21 June Isaev proposed a new design using compressed air instead of a pump to force propellant to the engine. The next day, Operation Barbarossa brought the Soviet Union into World War II, and the rocket-powered interceptor suddenly became important. Bereznyak and Isaev began a new more detailed design, which they finished in three weeks.

On 9 July Bolkhovitinov and his project-G team met with Andrey Kostikov the head of RNII. Dushkin was not happy about the idea of bypassing his fuel pump design, but they backed the plan and cosigned a letter that was eventually shown to Joseph Stalin. After giving a report at the Kremlin, they were ordered to build the aircraft and were given only 35 days to do so.

The official order was dated August 1, but work began in late July. The engineers were given leave to visit their families, and then literally lived at the factory until the aircraft were finished.
The new design was called "BI" for Blizhnii Istrebitel (close-range fighter), but the letters were also understood by everyone to stand for its inventors: Bereznyak and Isaev. The original plan to include four machine guns was replaced by a design with a pair of 20 mm (0.79 in) ShVAK cannon.

The skin was 2 mm (0.08 in) plywood with a bonded covering of fabric. The ailerons, elevators and rudder were fabric covered, and the flaps were duralumin. In the forward section were 5 compressed air tanks and 2 kerosene tanks. In the aft were 5 compressed air tanks and three nitric acid tanks. Pressurized to 60 bar (6,000 kPa), the tanks were made from a high-strength chromium-manganese-silicon steel ("Chromansil") that was not especially resistant to corrosion.

Thus, the acid tanks had to be replaced periodically. Compressed air was also used to retract and deploy the landing gear and to power the built-in cannon.

On 1 September 1941 the BI-1 was completed and ready for gliding tests by pilot Boris N. Kudrin as Dushkin's engine was still not ready. A few weeks later, rival aircraft designer A.S. Yakovlev took it upon himself to tow the prototype to TsAGI for windtunnel testing.

This alarmed Bolkhovitinov's team, because their patron had a rocky history with Yakovlev, but Alexander Sergeevich and aircraft designer Ilya Florov studied the test results and gave them sound advice for improvements. Yaw instability was corrected by enlarging the rudder and adding two circular plates to the tail horizontal stabilizer.

The BI was flown 12 times under power, seven times with Dushkin's D-1-A-1100 engine, three times with the DM-4 ramjets, and twice with Isaev's RD-1 rocket engine.

I believe this kit was manufactured by a company in Russia, because the text in the kit is all in cyrillic Russian.

It came in a sealed cello bag with a header card stapled to it.

the header card has a line drawing of the BI-1 being white in color with Soviet Air Force red stars on the wing tops and fuselage sides. However, I know that Soviet practice was to only put the stars on wing bottoms.

This is over a 3-view of the Bi-1 in medium-green over a light-blue undercarraige with some Russian text.

The other side of the header card has one exploded illustration provided for assembly purpose.

The bag contains one dark-green parts tree and a clear tree.

Trees are not alphabetized, nor are there any part number tabs next to the parts on them. Part trees are not illustrated in the instructions either. 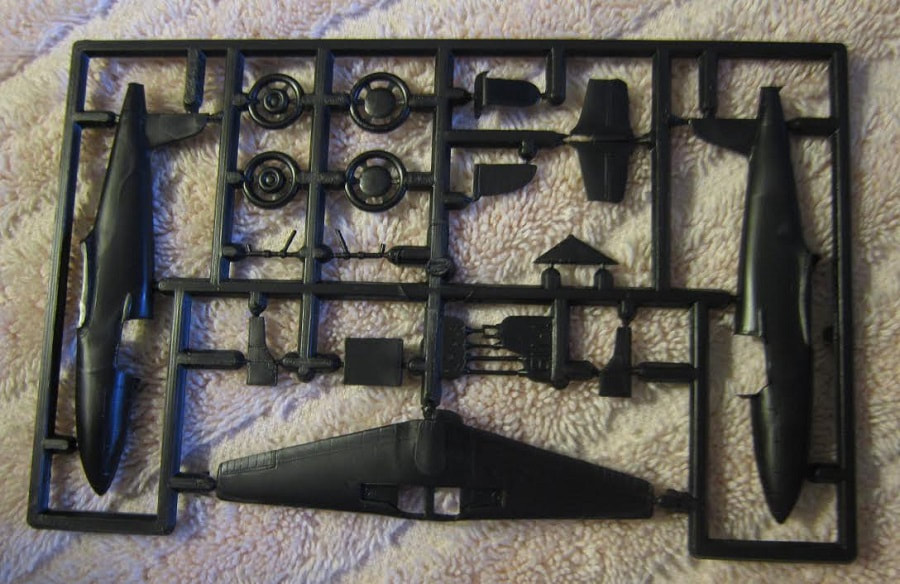 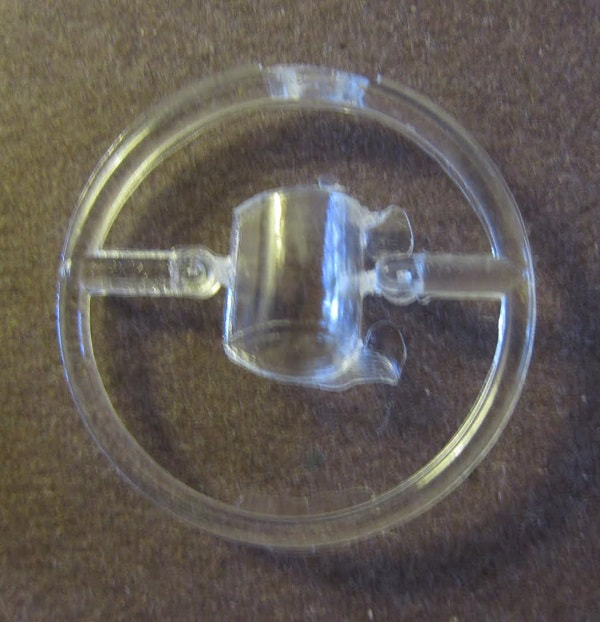 ​I have 6 pages that were copied from a old Air International magazine years ago about the BI-1.

Blueprints in this article showed that the tail wheel part in the kit is too triangle shaped and should be more rounded at the bottom and the wheel should extend out more and be slightly larger.

Also the blueprints show tailplane bracing struts above and below the elevators, that are not included in the kit. These fortunately can be easily fabricated from stretched sprue.

The gun bay cooling air intake atop the nose of the aircraft is also not included in the kit. This part will be more difficult to fabricate. 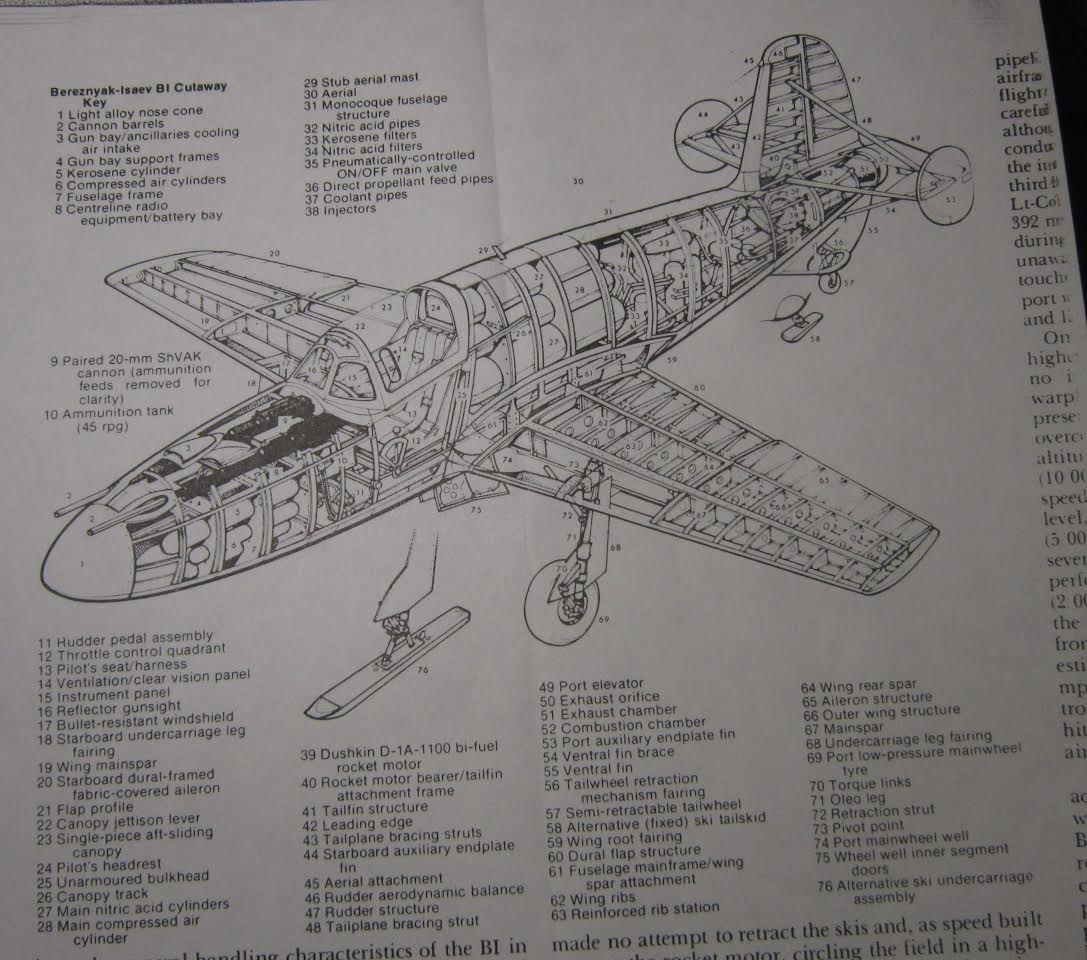 ​Dark inky photos of the actual BI-1 only show the number 2 and later 3 on a couple examples of the aircraft on the sides of the rudder. No Russian stars are visible.

​An easy fix later by sanding and adding a bigger wheel.

Cockpit is sparse with only a floor and the seat.

This is nice kit of an obscure Russian subject that I had never heard of before previously.

I got this kit in trade with a fellow who lived in Krakow, Poland.