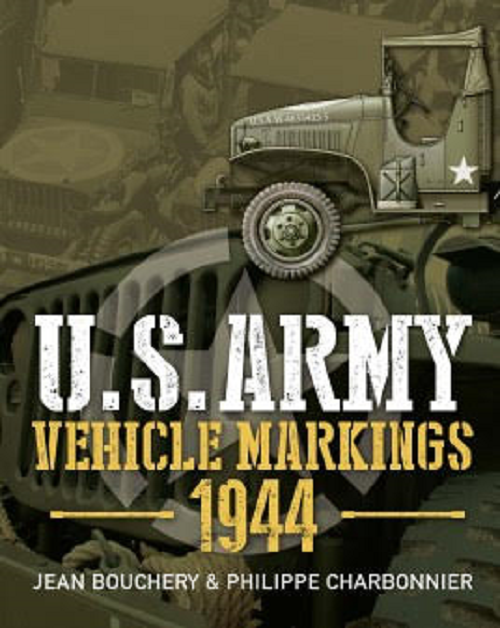 MSRP: $37.95
​Everyone is familiar with the iconic WWII Jeep, its green paintwork annotated white letters, numbers and symbols. Unintelligible to the casual observer, these markings were integral to the organization of the U.S. Army on the move in 1944.

The cover art shows a color side view of a 6 x 6 truck over a background that has more trucks done very faintly and a large white circle with a star in the center.

This uniquely detailed guide covers all the markings used on American tanks and tracked vehicles, lorries and Jeeps, to denote their unit and classifications, plus tactical markings and the debarkation codes used in the Normandy landings.

There are 267 black and white wartime photos of U.S. vehicles and 14 color ones.

There are 2 maps of the Red Ball Express's Highway and 2 other maps, 21 unit charts and 5 lists of the equipment they used.

The hundreds of contemporary photos are paired with precise color diagrams to show exactly how markings appeared on vehicles, including the exact measurements of markings, and explaining all the different variations in use.

A final chapter covers the variations of camouflage used on vehicles.

This book is a perfect reference for modelers, collectors, and restorers of historic vehicles, and a fascinating guide to anyone wanting to use WWII photographs to aid their research.

Jean Bochery, born before the war in Normandy, is a renowned specialist of the Allied Armies of WWII. He has authored several best-selling books such as "The British Soldier 1939-45", "The Canadian Soldier 1939-45" and "Allies in Battledress".

Philippe Charbonnier, born in 1962, is a journalist and editor of the French "Militaria Magazine", and specializes in the United States forces of WWII.
Highly recommended.

I want to thank Casemate Publishing who sent me this review sample. They are based in Havertown, PA and all their book titles can be seen on their web site at:
www.casematepublishers.com