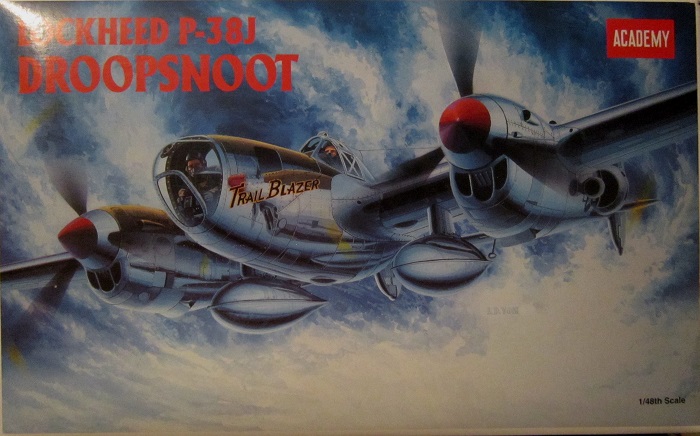 Academy is a model company based in South Korea. They make all manner of model kits in the popular scales.


Once it was discovered that the P-38 could carry the same bomb load as a B-17, but much faster, it was not long before the fighter-bomber abilities of the Lightning were put to work.


Colonels Cass Hough and Don Ostrander of the 8th Air Force developed the idea of using the P-38 as a strategic bomber. By adding a bombardier-navigator and Norden bomb sight, a single modified P-38 could lead a flight of normal Lightnings on bomber raids deep into Europe. The advantages were obvious when compared to the B-17 or the B-24.

The Lightning could carry the same bomb weight, but at much faster speeds, needed no fighter protection and used only one tenth of the crew required for a heavy bomber. First flown in February 1944, the Airforce gingerly tested the concept with three aircraft.

Quickly fifteen more were added; then Lockheed was commissioned to manufacture conversion kits for field installation,. Altogether, it is estimated that about 100 “Droop Snoot” aircraft were assembled.

There appears to be considerable debate over the bomb and fuel load carried by the “Droop Snoot”. It is likely the “Droop Snoot” aircraft carried a reduced load of bombs or drop tanks since it already had the added weight of a second crew member and the equipment required for precision bombing and navigation.

Photographs of fully loaded “Droop Snoots” are extremely rare; consequently you can assemble this “Droop Snoot” model with as many or as few bombs and tanks as you may wish. It is known that the “Droop Snoots” did not carry rockets. They got their nick name because of their glass noses.

This kit came in a shrink wrapped tray and lid type large sturdy box. Inside it has a letter L void that shows this box is 3” too long and 2” too wide.

The box art shows a head on illustration of a P-38J that is overall bare aluminum with an olive drab anti-glare panel in front of the windscreen and olive drab inboard panels on the engines. The propeller spinners are also olive drab. It carries the black fuselage code of Z 4N. The nickname “Trailblazer” is in red on the sides of the nose and the black stenciled serial number 423507 is on the rudder sides. No information is provided as to what unit this is and it is the ONLY scheme offered on the decal sheet in the kit.

One side panel has a smaller color repeat of the box art, MADE IN KOREA, not suitable for use by children under 36 months and a one-paragraph history of the aircraft in English, Spanish, French, German, Korean and Chinese. Each paragraph is labeled with a color illustration of the flag of the country that speaks that language.

The other side panel has 3 color walk-around type photos of the model made up in the box art scheme.

The kit contains 7 medium-grey parts trees in 4 sealed cello bags, 2 clear trees in a sealed cello, a tree of black vinyl tires, the decal sheet and the instructions.

The instructions consist of a single sheet that accordion-folds out into 6 pages in 8” x 11 ½” page format.

Page 1 of the instructions begins with a black and white repeat of the box art, followed by the history of the aircraft.

Page 2 through 4 give a grand total of 7 assembly steps.

In step 5 you opt to mount either the bombs or drop tanks.

Page 5 has a 6-view of the only scheme offered, the box art subject (already described above). Academy should have included a few more markings.

Page 6 has the parts trees illustrations, a 1995 copyright date and Academy said to be in Seoul, South Korea. 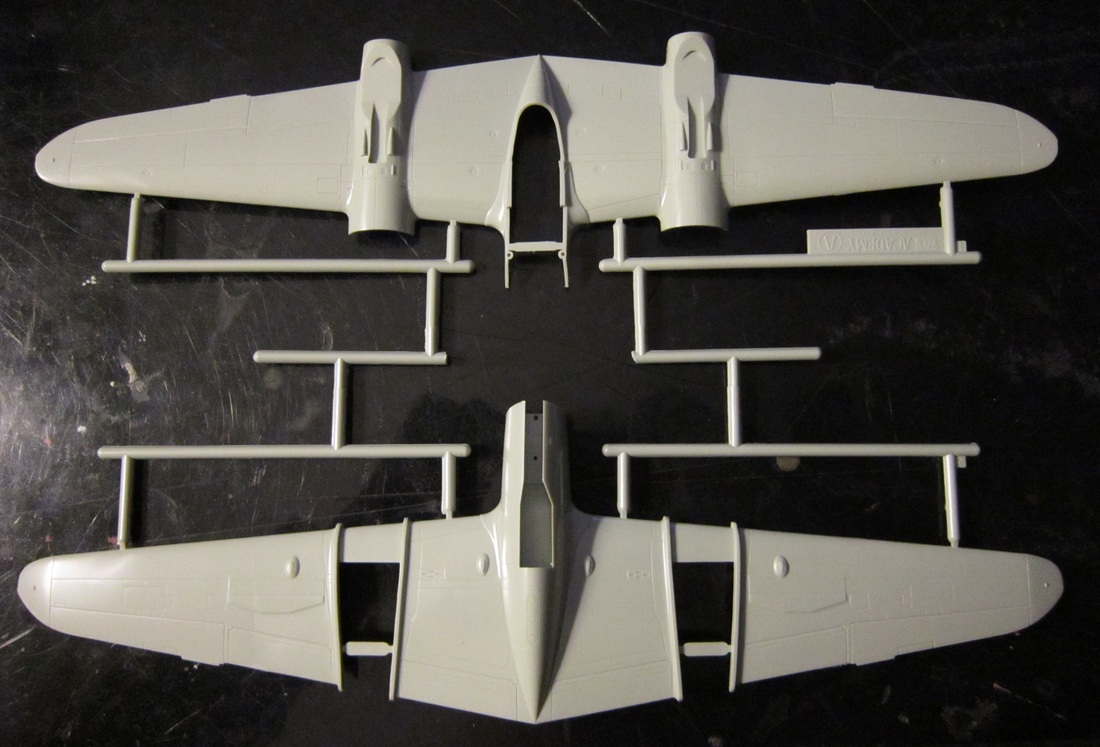 There are 2 identical medium-grey letter B parts trees. Each holds twin-boom halves (2 parts each) 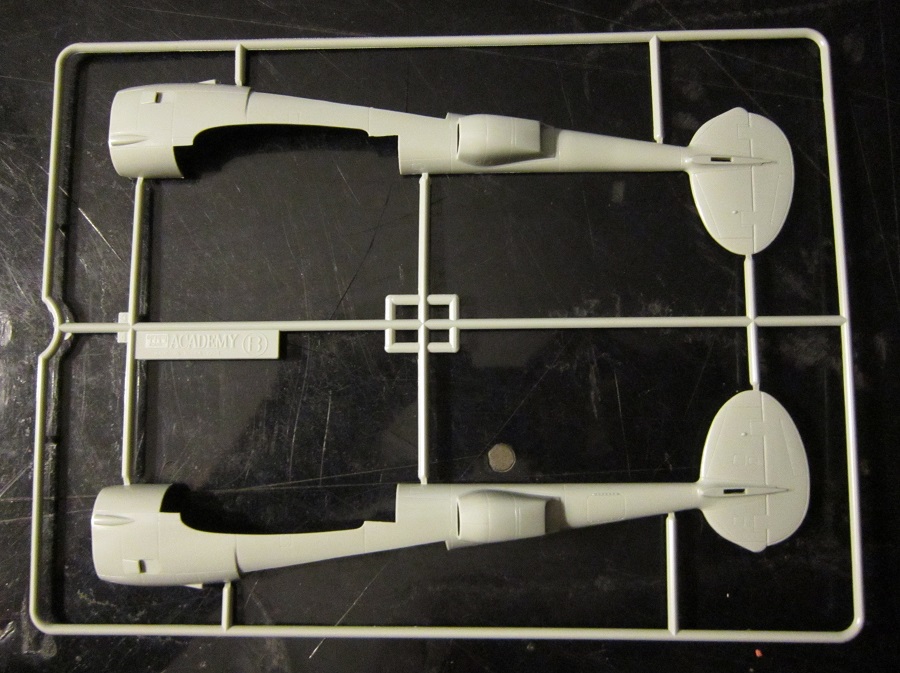 Medium-grey letter C parts tree holds: the cowlings etc. (8 parts) Two parts are listed as being excess on the parts tree illustrations and not needed to complete the model. 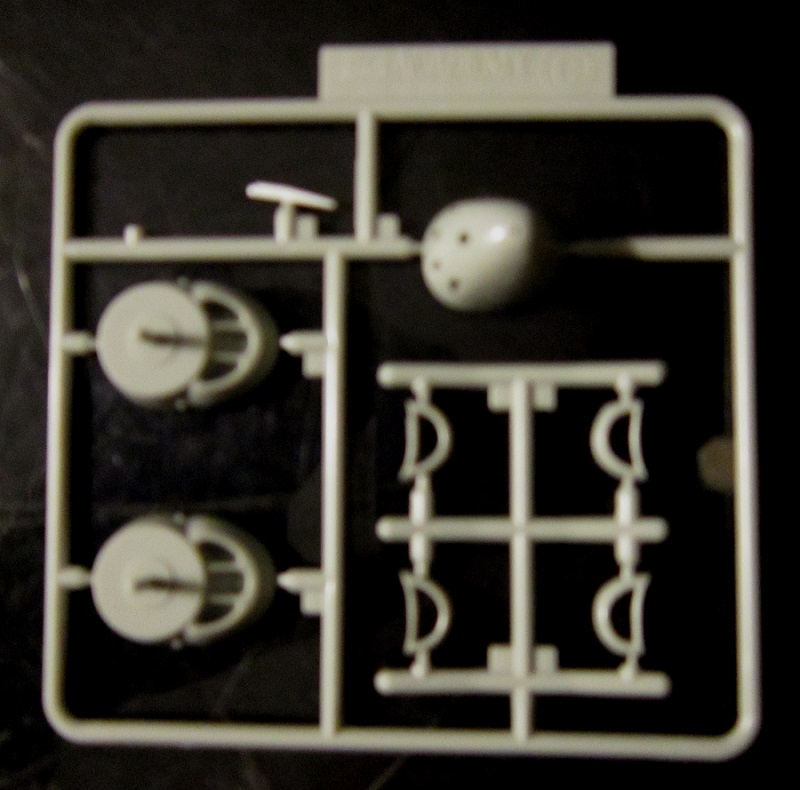 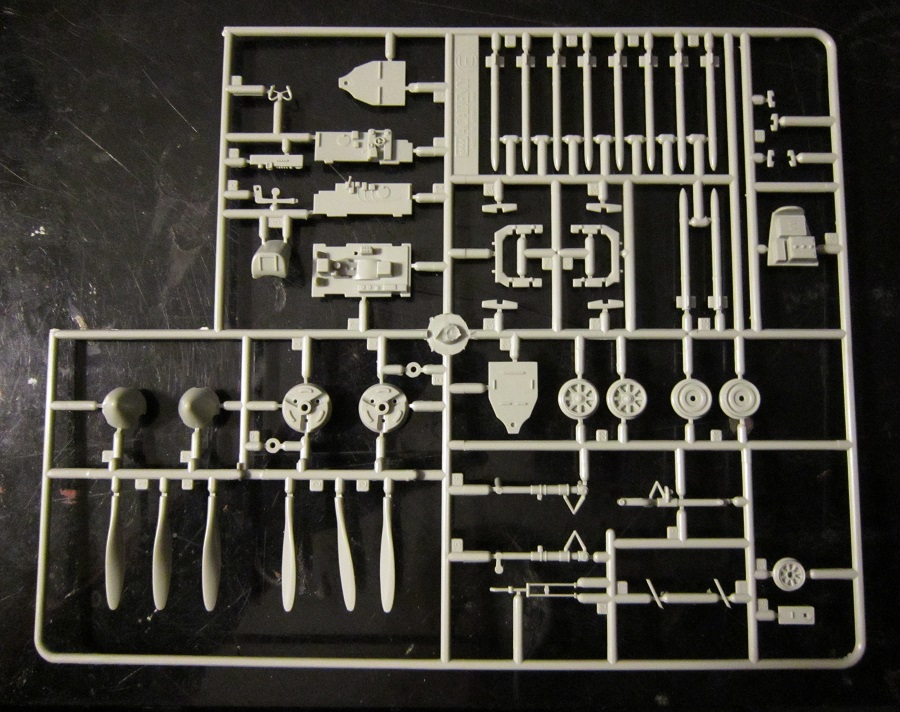 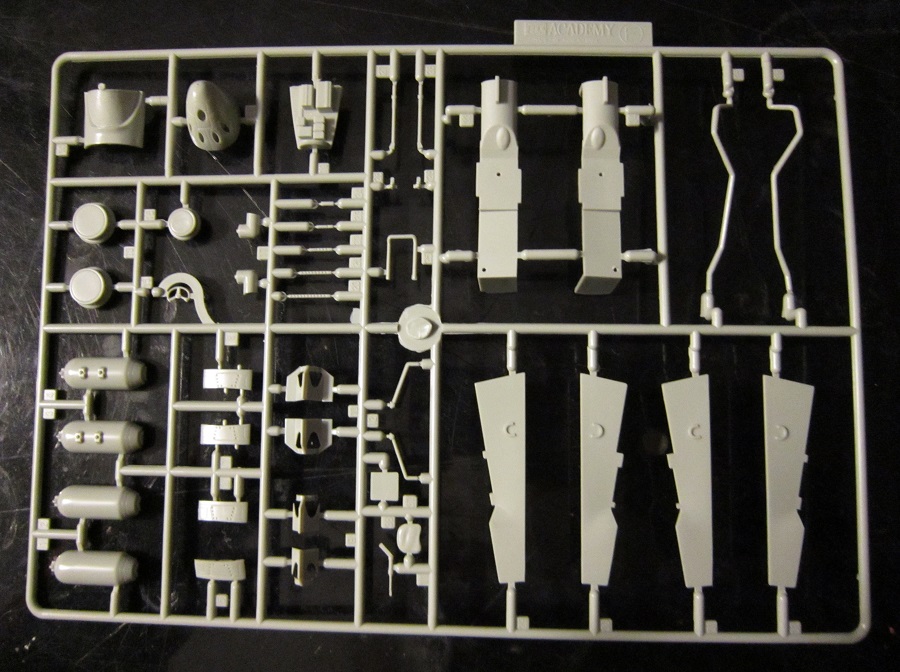 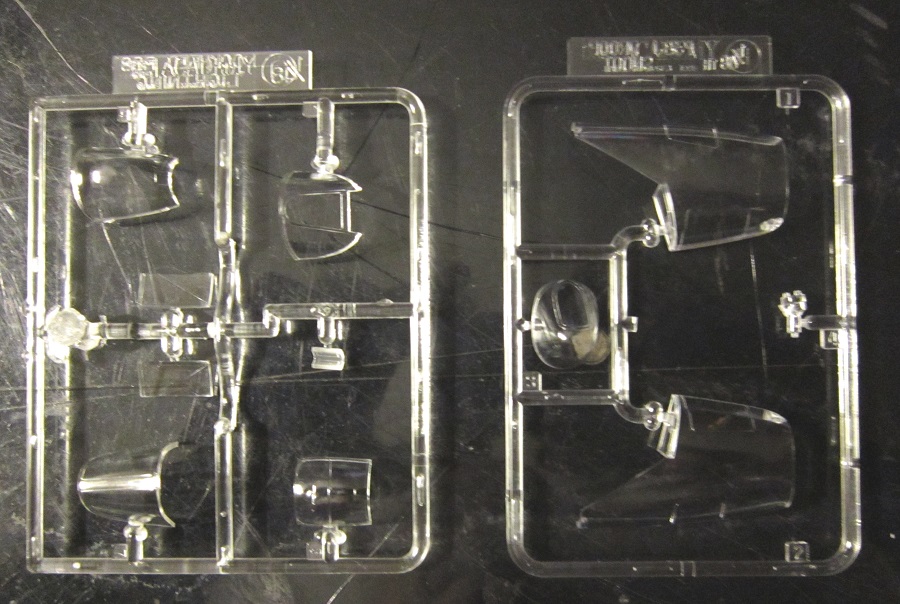 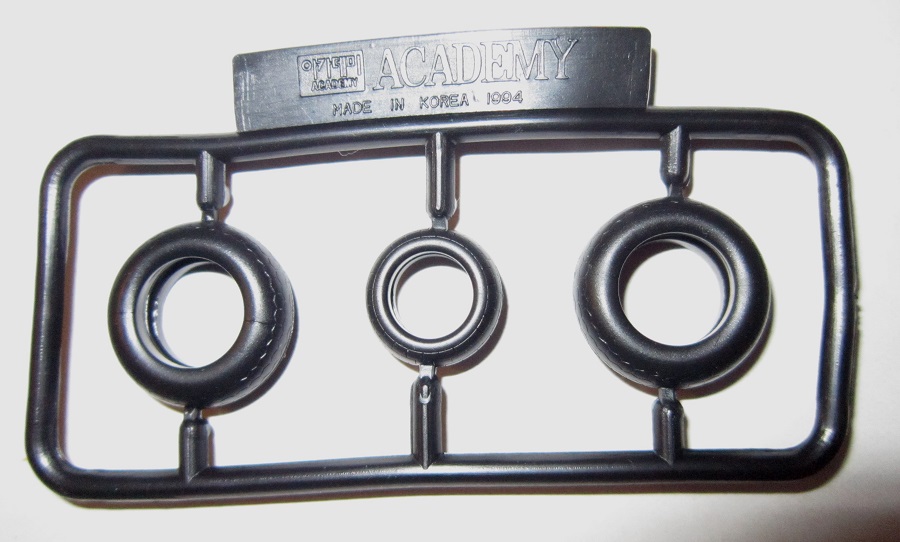 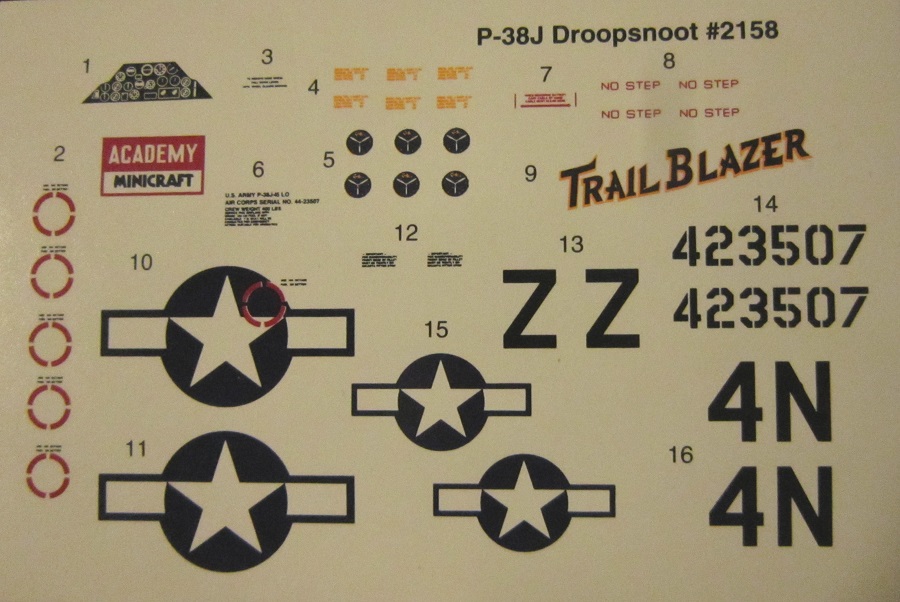 This will make up into quite a nice good sized kit of the P-38J.

Highly recommended to modelers of average building skills. Kit was courtesy of my wallet years ago.

I don’t know if it is still in re-release by Academy, but the company does re-release stuff occasionally.