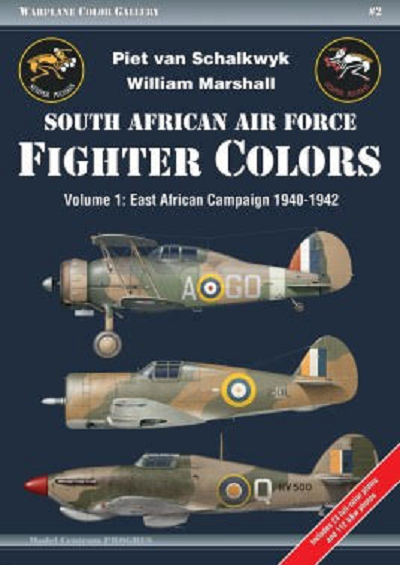 In the early stages of WWII, the Italian Forces in Abyssinia, East Africa, consisted of 200,000 troops and nearly 400 aircraft constituted a grave threat to Kenya and the Sudan.

The three squadrons operated mostly old and antiquated bi-planes in the form of Hawker Furies, Gloster Gauntlets and Gloster Gladiators. Between them they did also operate a number of Hawker Hurricane Mk. Is, of which some still had fabric wing surfaces and two-bladed wooden propellers.

These aircraft were also passed along between the various units, depending on the area that had the highest requirement. Among the three squadrons, 1st Squadron primarily used Gloster Gauntlets, while 2nd Squadron used Furies and Gladiators. with 3rd Squadron being the primary user of Hurricanes.

These units were joined by 4th Squadron, training on Furies and Curtis Mohawks, before moving to Egypt for operations in the desert. 3rd Squadron  later converted to these Curtis Mohawks, and eventually ended up with a mix of Mohawks, again supplemented by Gladiators.

41 Squadron, an Army-Cooperation unit, also converted to a fighter squadron after the major campaign was completed and served as a holding unit in East Africa, flying Hawker Hurricane Mk.IIs.

One Detached Flight, operating Mohawks during the final part of the campaign, was renumbered a B-Flight of the 3rd Squadron and joined the primary unit for the last major operations in East Africa.

The squadrons operated on all fronts in Somaliland and Abyssinia, and made a considerable contribution towards the victory that was achieved in that campaign.

Commentating on the part, that the SAAF Fighter Squadrons played in the campaign, Sir Archibold Sinclair said: "When the Italian come to draw up a list of the factors that caused them to lose the East African Empire, they will well place the South African Air Force somewhere near the top of the list".

This volume covers the combat history of these fighter squadrons during the campaign, as well as the colors and markings of their aircraft.

Primary sources, such as Squadron war diaries and pilot handbooks, were used in the preparation of the text contained in this book.

The volume contains 23 full-color plates and 143 black and white photos, indicating the people and aircraft operated by these squadrons.

This volume will later be followed by two further volumes, tracing the on-wards history of these squadrons as well as additional SAAF Fighter Squadrons during the campaign in North Africa and Malta, and the campaign in Sicily, Italy and the Balkans.

The two authors have already written eight books covering the colors and markings of the SAAF and SA Army equipment in a series of booklets entitled South African Colours and Markings, numbers 1 to 8.

Model Centrum Progres is based in Warsaw, Poland.

The cover art shows 3 color profiles of aircraft that the SAAF used:

1. A Gloster Gladiator Mk. II, N2289/GO-A operated by 3rd Squadron during the East African Campaign. It is finished in the four colors of the Temperate Land Scheme for biplanes (dark earth, dark green and light earth) but is heavily weathered. The lower left surfaces are finished in black, while the right surfaces are white. The fuselage code A roundel GO is light grey, while the serial no. is black N2289. It has a sky color fuselage band.

The fuselage carried Type A1 roundels, as well as the lower left hand wing, while the lower right hand wing carried a Type A roundel. The top surfaces of the upper wings had Type B roundels on them. It has a red, white and blue fin flash.

2. A Curtis Mohawk Mk.IV, 2508 (BS787) of 4th Squadron. Which was delivered to the SAAF in June 1941. It is finished in the Standard Temperate Land scheme of dark green and dark earth over sky under-carriage. It carries standard roundels with orange centers and outlines and a red, white and blue fin flash. Its serial no. is black 2508.

3. A Hurricane Mk. IIB, HV500/Q, of 41st Squadron, East Africa 1942. It is also in the Temperate Land Scheme of dark green, dark earth upper surfaces and sky lower surfaces. It carried standard roundels of Type C1 on the fuselage, Type C under the wings and a fin flash of orange white and blue. Fuse code was a white letter Q, followed by a black serial no. HV500.

Also on the upper corners of the cover art there is 2 variations of a squadron logo. It is a black circle, outlined in yellow with a wasp wearing a sailor cap and boxing gloves. On one version the hat and gloves are white and lettering at the bottom that says "SEMPER PUGNANS" is also in white.

The other version has the hat and boxing gloves as brown and the lettering in red. This is the logo of the 3rd Squadron.

The majority of the pages in book are jet black with white text and there is a lot of text and captions. Pages in the colors and markings section are white.

This book will be of great interest to aircraft historians and modelers alike. Highly recommended.

I want to thank Casemate Publishers for this review sample.
​Casemate is the N. American distributor of Model Centrum Progres books and all their titles can be viewed on Casemates web site at:
www.casematepublishers.com