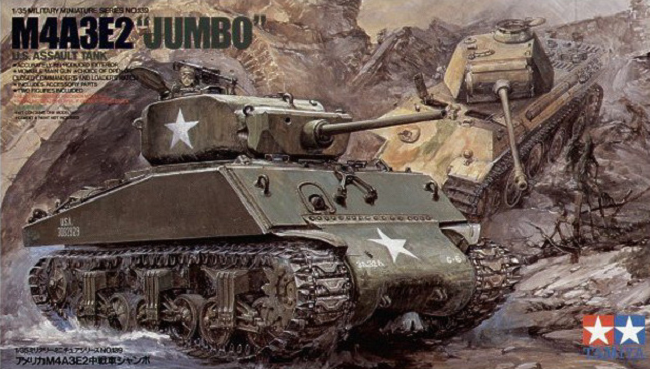 The M4 Sherman, officially Medium Tank, M4, was the most widely used medium tank by the United States and Western Allies in World War II. The M4 Sherman proved to be reliable, relatively cheap to produce, and available in great numbers.

Thousands were distributed through the Lend-Lease program to the British Commonwealth and Soviet Union. The tank was named by the British for the American Civil War general William Tecumseh Sherman.

The M4 Sherman evolved from the M3 Medium Tank, which had its main armament in a side sponson mount. The M4 retained much of the previous mechanical design, but put the main 75 mm gun in a fully traversing turret.
One feature, a one-axis gyro-stabilizer, was not precise enough to allow firing when moving but did help keep the reticle on target, so that when the tank did stop to fire, the gun would be aimed in roughly the right direction.

The designers stressed mechanical reliability, ease of production and maintenance, durability, standardization of parts and ammunition in a limited number of variants, and moderate size and weight.

These factors, combined with the Sherman's then-superior armor and armament, outclassed German light and medium tanks fielded in 1939–42. The M4 went on to be produced in large numbers. It spearheaded many offensives by the Western Allies after 1942.

When the M4 tank went into combat in North Africa with the British Army at El Alamein in late 1942, it increased the advantage of Allied armor over Axis armor and was superior to the lighter German and Italian tank designs.

For this reason, the US Army believed that the M4 would be adequate to win the war, and relatively little pressure was initially exerted for further tank development. Logistical and transport restrictions, such as limitations imposed by roads, ports, and bridges, also complicated the introduction of a more capable but heavier tank.

Tank destroyer battalions using vehicles built on the M4 hull and chassis, but with open-topped turrets and more potent high-velocity guns, also entered widespread use in the Allied armies. Even by 1944, most M4 Shermans kept their dual purpose 75 mm gun.

By then, the M4 was inferior in firepower and armor to increasing numbers of German heavy tanks, but was able to fight on with the help of numerical superiority, greater mechanical reliability, better logistical support, and support from growing numbers of fighter-bombers and artillery pieces.

Some Shermans were produced with a more capable gun, the 76 mm gun M1, or refitted with an Ordnance QF 17-pounder by the British (the Sherman Firefly).

The relative ease of production allowed large numbers of the M4 to be manufactured, and significant investment in tank recovery and repair units allowed disabled vehicles to be repaired and returned to service quickly.

These factors combined to give the Allies numerical superiority in most battles, and many infantry divisions were provided with M4s and tank destroyers.

After World War II, the Sherman, particularly the many improved and upgraded versions, continued to see combat service in many conflicts around the world, including the UN forces in the Korean War, with Israel in the Arab–Israeli Wars, briefly with South Vietnam in the Vietnam War, and on both sides of the Indo-Pakistani War of 1965.

Paraguay retired three Shermans from the Regimiento Escolta Presidencial (REP, Presidential Escort Regiment) in 2018, which marked the end of service of the final Sherman tanks in use anywhere in the world.

Intended for the assault to break out of the Normandy beachhead, it was originally to be armed with the 76 mm gun, but the 75 mm was preferred for infantry support and was used.

The higher weight required reducing maximum speed to 22 mph, and crews were warned not to let the suspension "bottom" too violently. 254 were built at the Fisher Tank Arsenal from May to July 1944, and arrived in Europe in the fall of 1944, being employed throughout the remainder of the fighting in various roles. They were "considered highly successful".
​THE KIT:

The box art shows a M4A3E2 coming out of a tunnel past a knocked out German Pz.Kpfw. IV sitting on a pile of rubble.

This is a RARE scenic type box art for Tamiya. Their usual habit is to pose the kit subject against an all-white background.

The "Jumbo" is overall olive-drab with a white star on the turret sides and the nose. The hull no. is a white USA over 3082929. On the left side of the box is the white no. 3 triangle 32 triangle and on the right is the white no. C-6.

The tank commander is looking out of the upper turret hatch. He wears a leather tanker's helmet and goggles.

One side panel has a color 3-view of a M4A3E2 in olive-drab over painted with winter white-wash, followed by a paragraph all in Japanese (the history of the tank ?) and color illustrations of the commander figure, a road wheel, individual track links, tools and wood ammo crates. Tamiya's street address in Shizuoka City, Japan is provided.

​The other side panel has a color 3-view of a M4A3E2 also in overall olive-drab, with a white star on the sides of the turret and on the bow.

It carries the white serial no. USA over 3583081 on the rear end of the sides of the hull. On the left of the bow is white triangle triangle 37 triangle and on the right is white C-8. This is followed by another paragraph in Japanese and color illustration of a M4A3 75mm gun, late model (Tamiya kit no. 35122) and Tamiya's address again.

Page 1 begins with a black and white repeat of the box art. Over the history of the "Jumbo" in 8 languages, including English.

Page 2 begins with READ BEFORE ASSEMBLY instruction, illustrations of tools suggested to use and a listing of Tamiya brand paints in the 6 languages.
The bottom of the page has the first 2 assembly steps.

Page 3 through the top of page 7 give a balance of a total of 13 assembly steps.

The bottom of page 7 has painting instructions in 4 languages, including English and 2 illustrations of other tank kits Tamiya manufactures: a Japanese Type 97 (late-version) Kit no. 35137 and a Russian T34/85 medium tank, Kit no. 35138.

There is a 3-view of the box art scheme (already described above). It is no. 6 tank of Company G, 32nd Armored Regiment, 3rd Armored Division.

A side view of a "Jumbo" with a white star on the turret sides and sides of the hull with serial no. USA 3082940. It is no. 9 tank of Company B, 1st Battalion, 67th Armored Regiment, 2nd Armored Division.

A service coupon is at the bottom of the page, intended for Japanese modelers only and all in Japanese. Instructions printed in Japan.

There are no parts trees illustrations in the instructions. However, the trees are alphabetized and have part number tabs next to the parts on them. 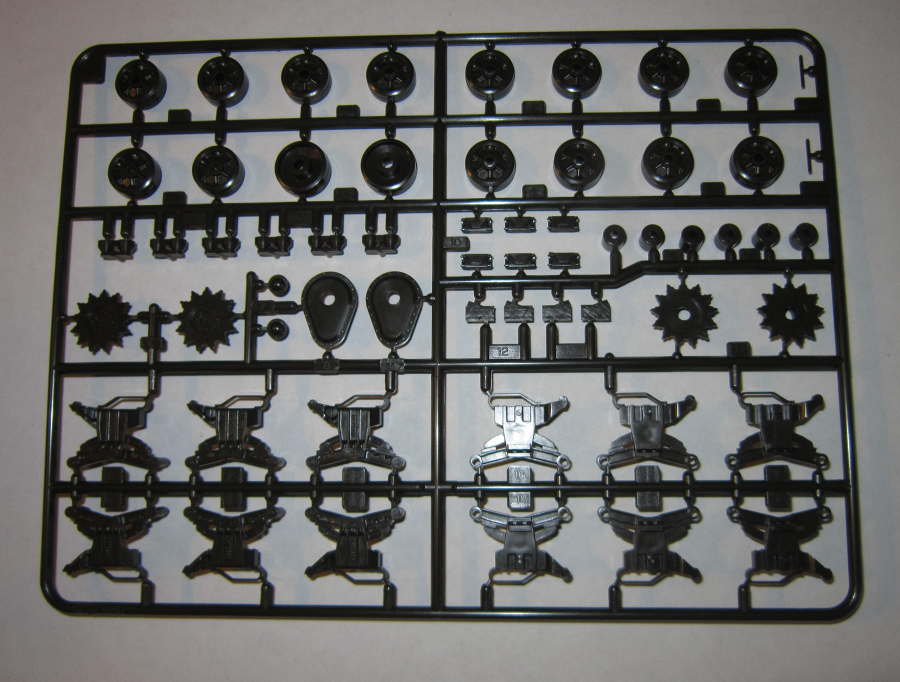 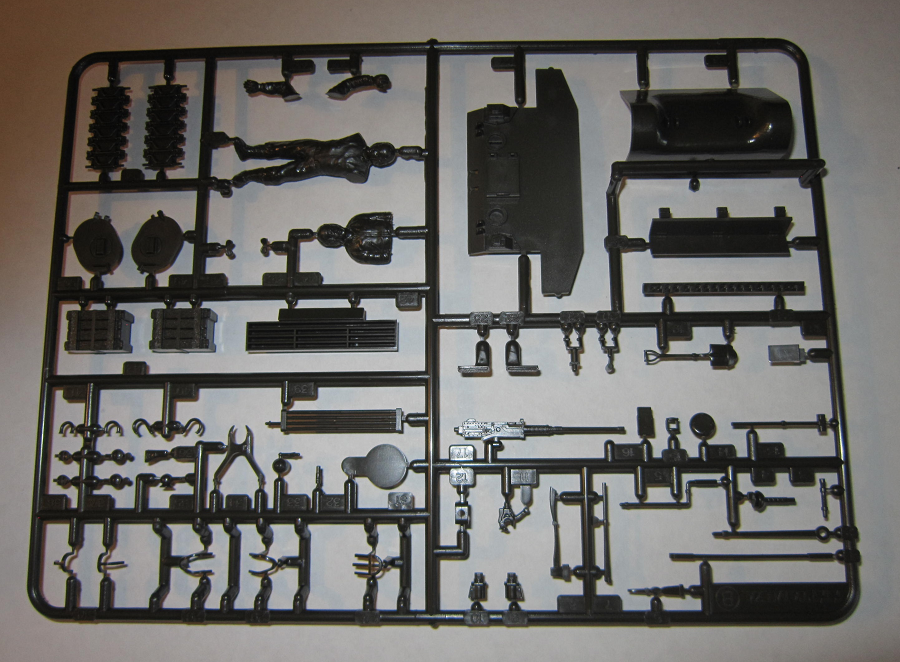 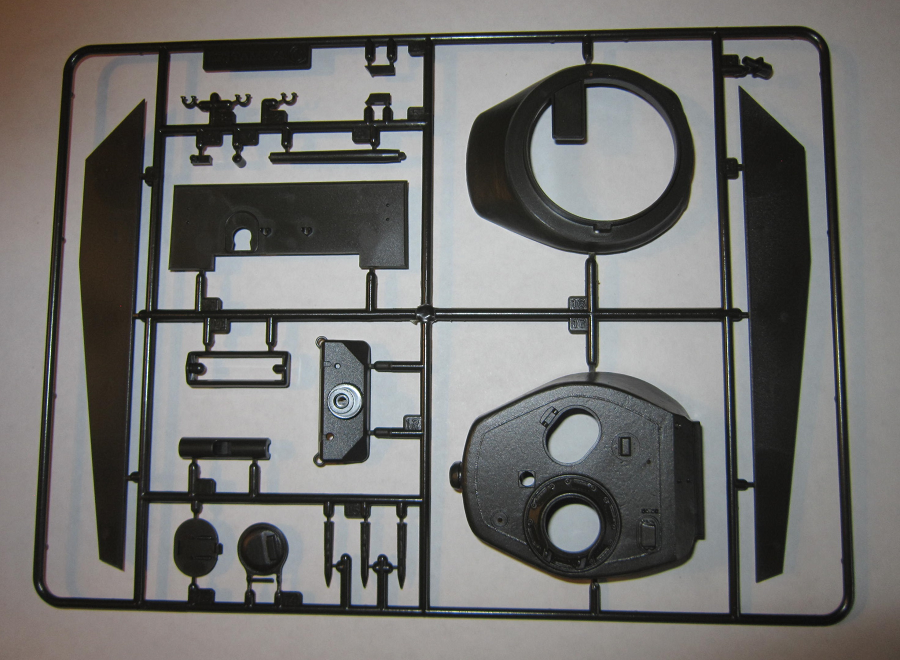 ​The loose olive-drab hull tub and roof are next. 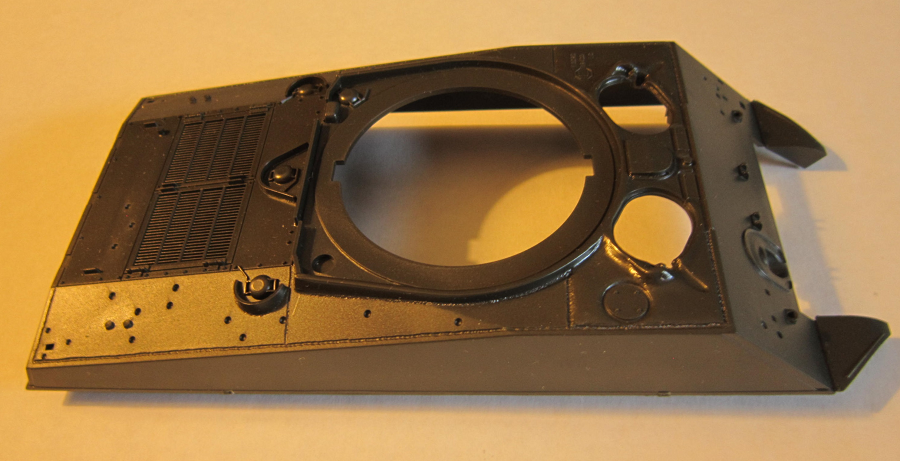 ​The black vinyl treads are next (2 runs) Detailed inside and out. 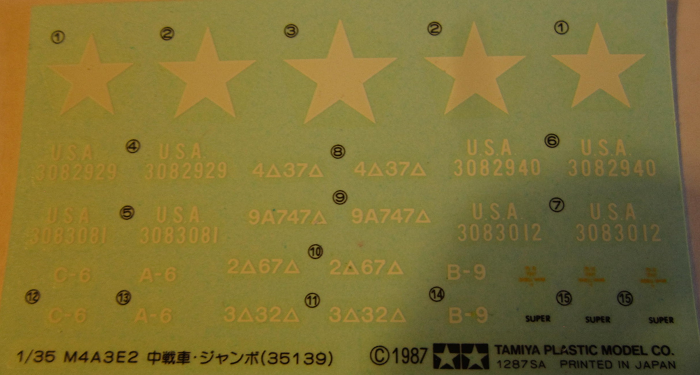 I purchased a set of Archer Fine Transfers decals for a 6th AD M4A3E2 tank. 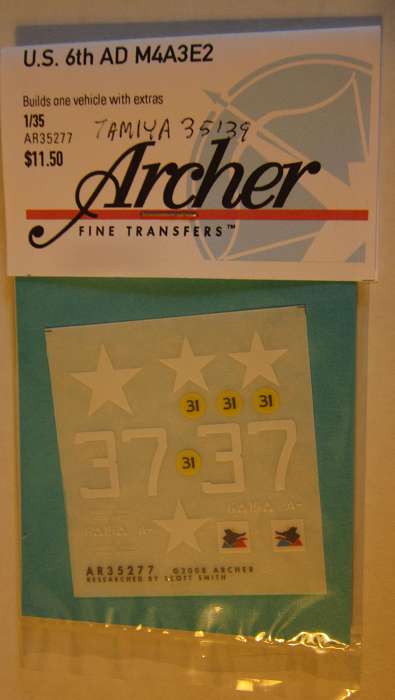 ​Finally, there are two trees of black vinyl poly-caps. (4 caps on one tree, 5 on the other) 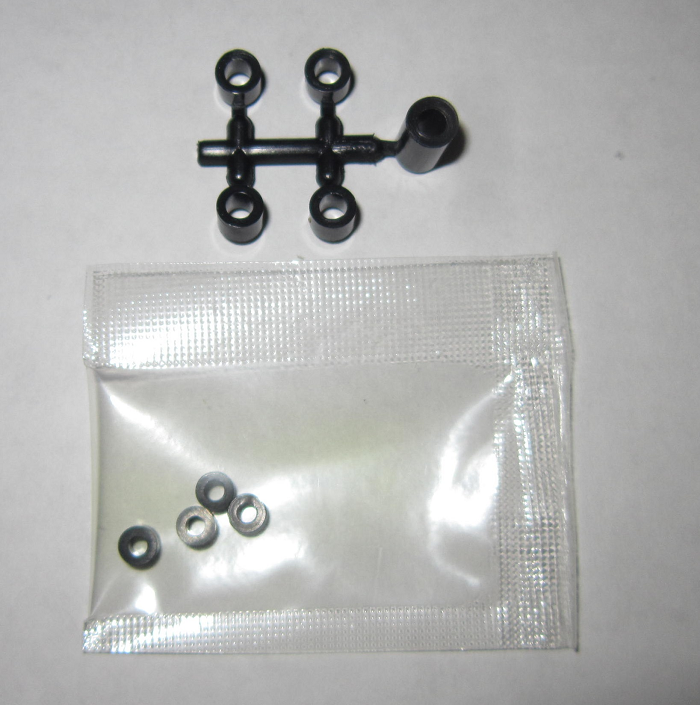 ​There are no clear parts included in the kit and no interior detail. Externally is very nicely detailed.
Recommended.