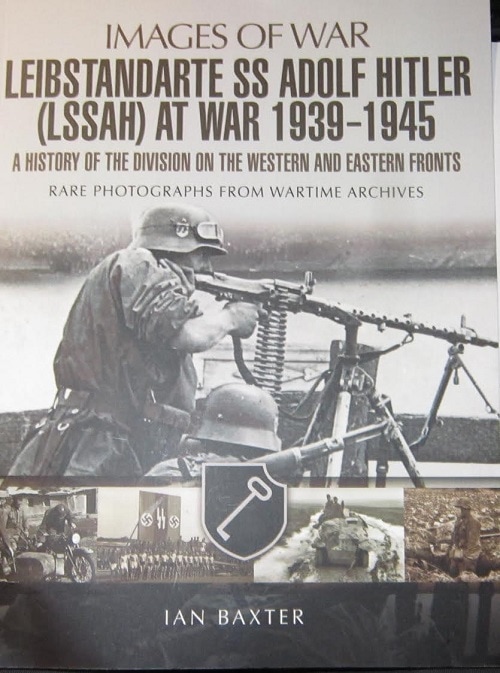 Review of SS Leibstandarte Adolf Hitler (LSSAH) at War 1939-1945
Images of War, a History of the Division on the Western and Eastern Front
Rare Photographs from Wartime Archives
Author: Ian Baxter

With extensive text and many unpublished photographs with in-depth captions - the successful Images of War format - this book describes the Division's fighting tactics, weapons and uniforms. It traces how the Division became an elite fighting unit both in offense and defensive battles.
The Division is shown as it battled its way through Poland, the Low Countries, the Balkans and then on the Eastern Front, where it fought tenaciously for Kharkov and in the 1941 battle of Kursk.

In 1944 it was deployed to Normandy before the carnage of the Falaise Pocket. Soon after it was back in action during the bitter winter fighting in the Ardennes, before returning to the Eastern Front, where it was shifted from the disintegrating part of the front to another.

The Leibstandarte SS Adolf Hitler (LSSAH) provides a captivating glimpse of the history and inner workings of one of the most effective fighting formations of the Second World War.

Ian Baxter has produced a fine selection of highly illustrated books in the Images of War Series, mainly covering Axis Forces in WW2. He is a dedicated collector of rare images and is an expert in his field. He lives near Chelmsford, Essex, U.K.

The book has numerous photos of the Leibstandarte troops both on parade and in the field. There are a few pictures of their vehicles and a photo of a Fiesler "Storch" observation plane.

The last 3 pages in the book are blank with the word "NOTES" at the top.

This is a neat picture album with many interesting photos in it not seen before. It will be of much interest to military historians and modelers alike.

I want to thank the folks at Casemate for this review sample which was sent to me in a padded manila envelope and the folks at Pen & Sword.

All Pen & Sword book titles can be seen on Casemates web site at: