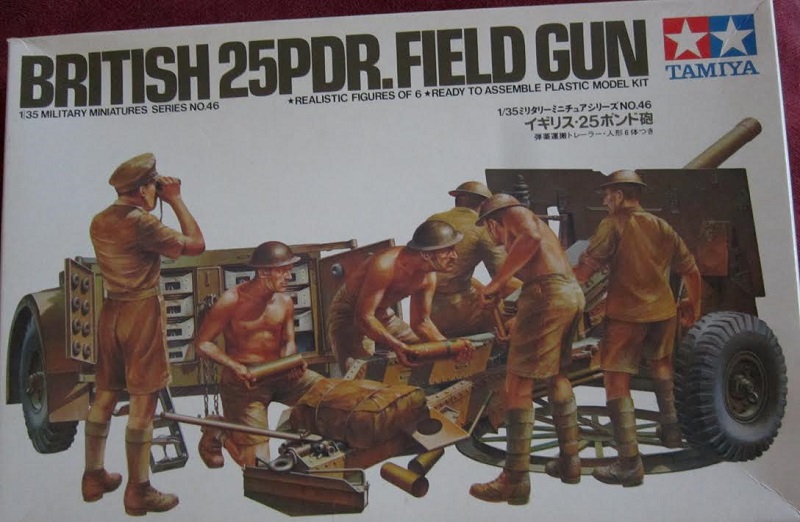 In the British Army the Royal Regiment of Artillery has a long and distinguished history. It’s motto, which is in Latin, is “UBIQUE QUO FAS ET GLORIA DUCUT” and means “Everywhere they lead with right and glory”. At all ceremonial parades the Royal Artillery takes the position of honour, “the right of the line”. Although many types of weapons have been used by the Royal Artillery, ranging from small 2 pdr. anti-tank guns right up to 5.5” howitzers and in the Garrison Artillery huge naval type guns. The main weapon which equipped all Field Artillery Regiments attached to Infantry Divisions during WWII was the 25 pdr.

This gun was a direct descendant of the famous 18 pdr. , which as a breach-loader had been used from about the turn of the century. But the origins of the 18 pdr. go back to smooth-bore muzzle loaders of the early 19 century. The British Army still has some 18 pdr’s., horse drawn, and these are equipment of the famous “K” Troop of the Royal Horse Artillery. This famous troop can be seen at ceremonial parades, such as the Queen’s birthday, when they still fire the salute.

The 25 pdr. directly developed from the 18 pdr. appeared at the beginning of WWII. This 25 pdr. gun howitzer was designed in 1935 and developed to replace the then standard 18 pdr.Field Gun. The final stages of development were hastened by the outbreak of war in 1939. Early deliveries were of a cross-bred equipment – the 18/25 pdr. or 25 pdr. Mark I, which consisted of a refined 18 pdr. piece on the old carriage.

The final carriage design – a sturdy, riveted box trail with a turntable platform under the wheels – was adopted after trials with a heavy 2-legged split trail. This design proved highly successful giving an easy 360 degree traverse despite limited lateral movement of the piece itself. The latest British gun, the 105 mm Light Gun, which came into service in 1975, has the same carriage arrangement. In both cases, the platform travels under the trail and is lowered for firing. The platform digs in to give stability nd the trail spade is rarely needed. A spade box normally covers it, and allows the trail to be lifted to traverse the gun. The whole gun was extremely rugged in its design, and in 34 years has had only one major modification, the adoption of a double-baffle muzzle brake in 1943.

The box art shows a 25 pdr. and it’s 6 man gun crew posed against one of Tamiya’s signature all white backgrounds, that they use on most of their kit boxes.

The gun and it’s ammunition limber are in overall dark green. The 6 man crew are all dressed in summer uniforms of short sleeve shirts and shorts with knee socks and low shoes. Two crewmen are bare chested. Five crewmen wear steel helmets and the standing officer has a cloth peaked hat and is looking through binoculars.

The two bare-chested figures are kneeling and holding ammo rounds, a seated figure is aiming the gun, another is holding a ram rod. The 6th figure just seems to looking on at things.

One side panel has a color illustration showing a Quad gun tractor pulling the limber and 25 pdr. in profile. Followed by the history of the 25 pdr. in Japanese and MADE IN JAPAN.

The other side panel has 3 color box arts of other artillery kits that Tamiya markets:

No kit numbers are provided for these 3.

This is followed by a black sticker with white lettering that says “Precision model kit, modeling skills helpful if under 10 years of age”.

Further black stickers with white lettering are on each end of the box. The give the address of Model Rectifier Corp. in Edison, NJ, who at one time was the U.S. importer of Tamiya kits. Prior to them importing the kits, all the text in the kits was in Japanese only.

This kit contains 3 light tan trees of parts in 2 stapled-shut cello bags, the instructions and a color catalog of other Tamiya kits.

There are no decals in the kit, as these guns were never marked in any way.

The instructions consist of a single sheet that accordion-folds out into 6 pages in 6 ¾” x 10 1/8” page format, folded twice to fit the box. 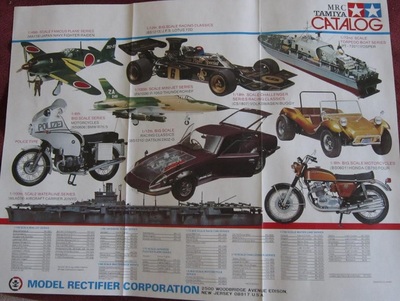 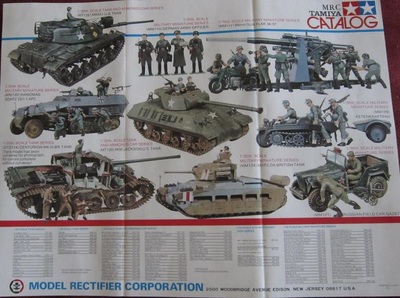 Alphabetizing of the parts trees begins oddly with the light tan letter X parts tree. It holds: the gun shield, rotation base and other parts I cannot readily identify. So just please look at the picture. (62 parts) 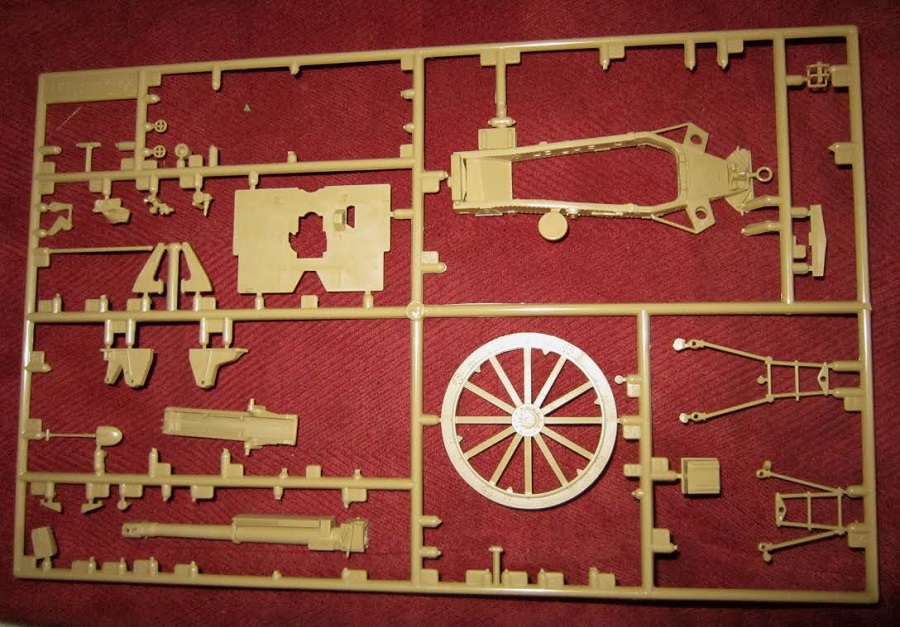 I have started to barely put some of these parts together. 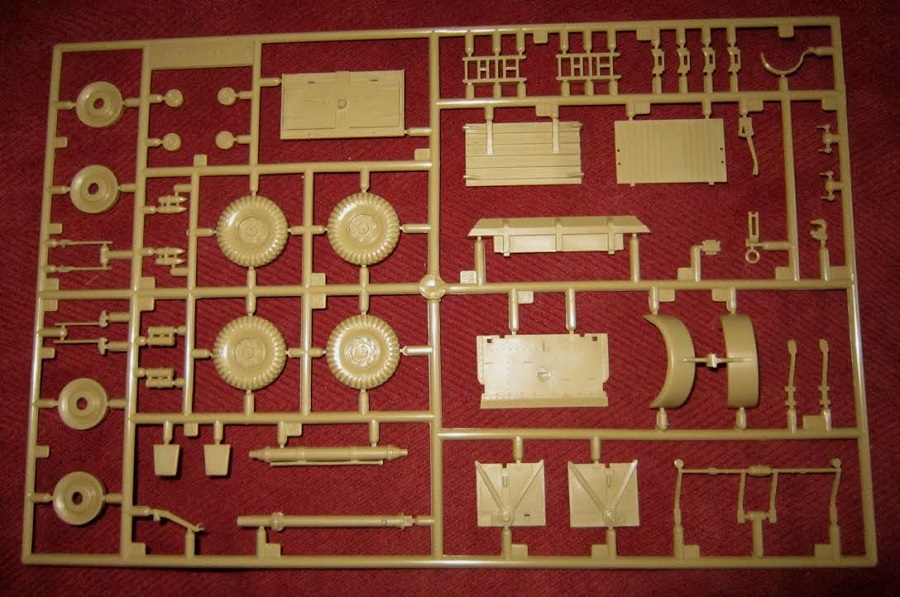 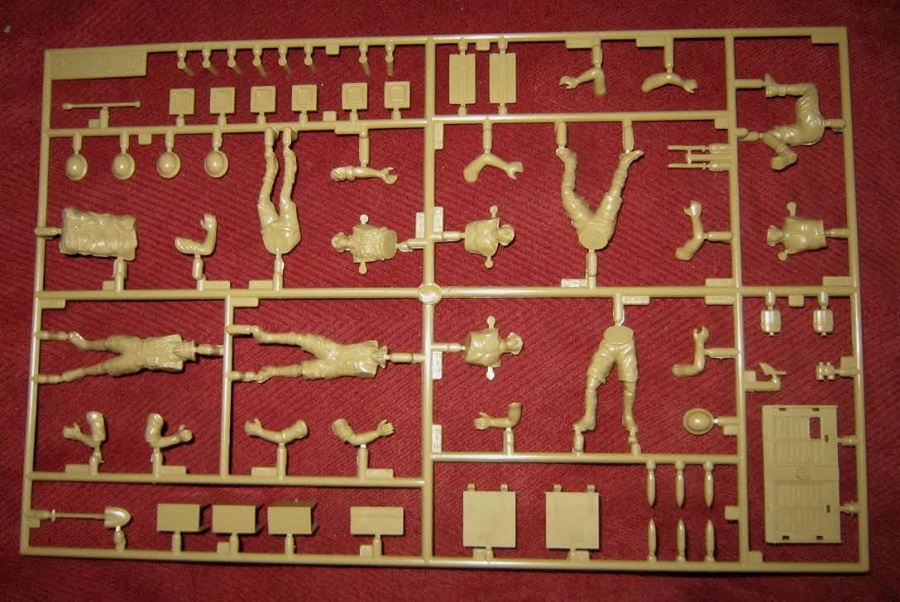 Part 57 attaches to the Gun Shield. 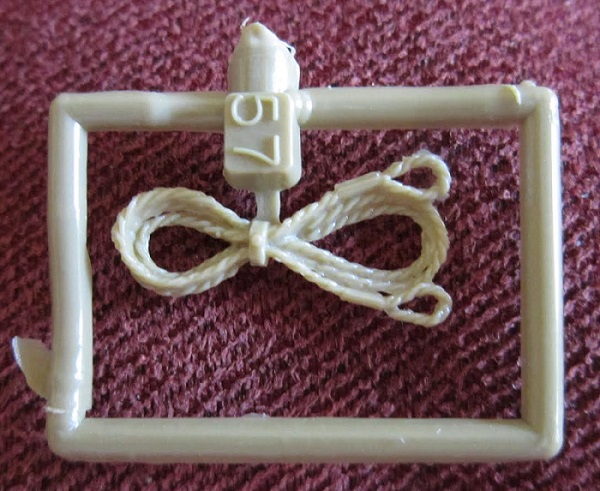 This kit is still available at a few overseas vendors on line for around 14 euro.

It makes up into an instant diorama and I highly recommend it.

Like I said above I purchased this kit on sale for a measly 2 bucks at a store that went out of business at both the local malls.