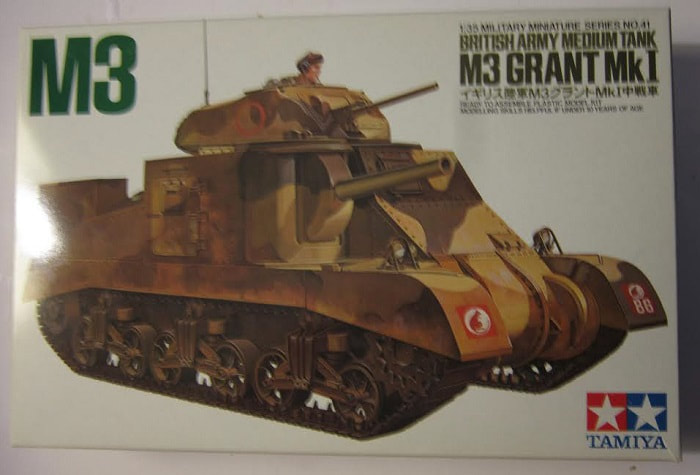 This was on the German  15th Panzer Division's route of advance to the rear of the British Gazala defence line.

They started a tank-to-tank fighting with the 1st Battalion of the 8th Tank Regiment sent forward by the German 15th Panzer Division.

British tanks of the 8th Light Cavalry regiment gave direct hits to German Pz.Kpfw. III tanks equipped with a 50 mm tank gun. They were advancing in wedge formations. The British tankjs were firing from out of the German tank's range.

The German 15th Panzer Division had never been attacked in such a way in the North African theater. German tank commanders rubbed their eyes in surprise and looked to the front through their field glasses. They saw unfamiliar tanks of high silhouette with their camouflage nets removed firing at them.
​These were M3 Medium "General Grant" Mk. I tanks armed with a 75 mm tank gun M2 (31 calibres long) that showed themselves for the first time at the Battle of Gazala.

Through the effective use of the Grant Mk. I's 75 mm gun M2, the 8th Light Cavalry Regiment in the British 4th Armoured Brigade fired away at the fire support positions of the German 33rd Mechanized Artillery Regiment of the 15th Panzer Division  to separate them frm their tank forces.

Owing to the activity of the German 3rd Battalion, however, the British 8th Light Cavalry Regiment was beaten and the 3rd Tank Regiment was forced to abandon its 16 Grant Mk. I tanks.
​ In the attack on the British Gazala defense line our fighting capacity has been considerably reduced by the appearance of the This was the first round of the Battle of Gazala. The tank-to-tank fighting in the Battle of Gazala was called "Battle of Night Bridge" where fierce fighting continued for about 22 days between the British forces consisting of the 2nd, 4th and 22nd Armoured Brigades and the German forces including the 8th Tank Regiment of the 15th Panzer Division and the 5th Tank Regiment in the 21st Panzer Division.

At first the German Afrika Korps was considerably damaged by the attack of the Grant Mk. I, but in the end it overwhelmed the British armoured forces. This was because the Germans were well experienced and effectively used the famous 88 mm anti-aircraft gun, while the British commanders had no experience in mobile warfare and their men were not trained.

The British forces lost Tobruk and their Gazala defence line was broken through. Thus, the British withdrew to the 8th Army's El Alamain defense line in Egypt. General Erwin Rommel said in the battle "I have underestimated the powerful new weapon, the Grant medium tank. All of us are now forced to fight desperately against the over-powering enemy. I am afraid fighting in the future will be no easy matter for us."

As in seen in his statement, the British armoured forces would have won the tank-to-tank fighting of the Night Bridge if they had used thier Grant Mk. I medium tanks concentrically.
To add armoured troops to the Expeditionary Army in France under Earl Lord Gort, Full General, the British Army sent D.A. Tratt's 1st Tank Brigade (the 4th and the 7th Tank Regiment under the direct command of the Expeditonary Army and Major General R. Evan's 1st Armoured Division (the 2nd and 3rd Armoured Brigade's) to the French front in June 1940.
​However, they were defeated by the overpowering German tank troops and withdrew through Dunkerque and Cherbourg to England with their tanks left in France. With the expansion of WWII, the British Army had to reinforce  its armoured troops and make up for the loss of tanks in France.
The British Army sent a tank mission to America to obtain American tanks, learning lessons from the European war. The Americans started in those days to reorganize the Army and form new armoured units. The U.S. Army Arsenals entrusted private manufacturers with the task of producing light and medium tanks for the new armoured units. Thus, the production setup of tanks being established.

The British Army sent a tank mission to America to obtain American tanks, learning lessons from the European war. The Americans started in those days to reorganize the Army and form new armoured units. The U.S. Army Arsenals entrusted private manufacturers with the task of producing light and medium tanks for the new armoured units. Thus, the production setup of tanks being established.

Under the National Munitions Program, William S. Knudsen, President of General Motors, became a member of the National Defense Advisory commission formed for controlling defense industries, and American heavy industries were mobilized into production.
Light tanks were in the charge of American Car & Foundry. Medium tanks were the charge of Chrysler's Detroit Arsenal. According to the original National Munitions Program, the M2A4 light tank and the M2A1 medium tank were to be manufactured, bu the program was changed thereafter and the M3 medium and light tanks with more powerful armament were to be produced instead.

Light tanks were in the charge of American Car & Foundry. Medium tanks were the charge of Chrysler's Detroit Arsenal. According to the original National Munitions Program, the M2A4 light tank and the M2A1 medium tank were to be manufactured, bu the program was changed thereafter and the M3 medium and light tanks with more powerful armament were to be produced instead.

Members of the British Tank Mission then in America unofficially joined the U.S. Army Armor Commission conferences on the development of tanks, particularly on design and development of the M3 medium tank. They submitted detailed proposals regarding improvements in tanks based on lessons learned from the European war.
​In October 1940, the British Tank Mission placed orders for medium tanks with Baldwin Locomotive Co., which had previously recieved contract from the British Army foir tanks. Lima Locomotive Works, Pressed Steel Car Co., and Pullman Standard Car Co. under the condition that they should deliver the tank by the end of December 1941 to British armoured troops which had about 23 of their tanks in France.

The British Tank Mission required that the medium tank should be the same as the pilot model of the M3 medium tank trial manufactured by Chrysler's Detroit Arsenal on 11th April 1941. Except that its turret should be replaced by a larger cast revolving turret with commander's hatch designed in Britain.

While the M3 medium tank of American design which had a cast revolving turret with a 37 mm tank gun, M5 was called "General Lee" Mk. I, after General Robert Edward Lee.  The medium tank with with a 75 mm tank gun M2 produced by the four manufacturers was nicknamed "General Grant Mk. I" after General Ulysses Simpson Grant. He was Commander in Chief of the Federal Army in the Civil War and obtained the victory. Later he became 18th President of the United States.

Early in 1942, a total of 242 General Grant Mk. I tanks were supplied to the British forces in the Middle East and 167 of them were used by armoured troops in the Gazala area. They were depended upon and called "The Last Hope in Egypt" by officers and men of the armoured troops.

The body of the Grant Mk. I was of riveted construction. A 75 mm tank gun M2 (31 calibers long) was mounted on the limited traverse mount M1 of the right sponson. On the left offset part of the body was a large cast revolving turret for a 37 mm tank gun M5.
Unlike the Lee Mk. I, the Grant Mk. I had no machine gun turret on the revolving turret  for the 37 mm gun. The secondary armament consisted of  three calibre 0.30 (7.62 mm) Browning M1919A4 machine guns on the front mount  and the combination mount.

The number of the crew was 6. The Grant Mk. I used a Wright Whirlwind R-975 EC2 8 cylinder air-cooled radial gasoline engine offering 400 hp and a synchromesh type transmission for four forward  and one reverse speed. Also, the Grant Mk. I employed like the Lee Mk. I tracks of surface-glossier rubber and vertical volute spring suspension system.

The M3A5 medium tank with three turrets of the American type  manufactured by Baldwin was named Grant Mk. II. This type had smoke dischargers  on the sides of the revolving turret and was used mainly in Burma in 1945.

THE KIT:
Tamiya is a old prolific model company based in Shizuoka City, Japan. They manufacture all manner of model subjects in the popular scales.

The box art is in Tamiya's usual practice of posing the kits subject against an all-white background.
It shows a M3 Grant Mk. I in dark-yellow base with red-brown and light-brown blotches. The tank commander is looking out of the turret hatch. He wears a black beret and has head phones on.
​It has a red square with a white circle with a Jerboa on it on the front of the left front and rear fender and that insignia over a white 86 on the front of the right front fender and right rear one. There is a red circle on the sides of the turret.

It is a Grant with the British 7th Division, Battle of El Alamein.

The box art says the that model skills are helpful if under 10 years of age.

One side panel repeats the box art in color smaller, followed by the history of the M3 in Japanese and MADE IN JAPAN.

The other side panel has color box arts of 5 other AFV kits that Tamiya makes: a Panther German tank, a M42 "Duster" U.S. Anti-aircraft gun, a M41 "Walker Bulldog" U.S. tank and a M36 "Jackson" U.S. tank.  These box arts all show scenic backgrounds which is not Tamiya's usual practice as said earlier. No kit numbers are provided for them. I assume they are all to 1/35th scale.

However, my kit was missing the instructions. My friend John Kelley came to the rescue and e-mailed me a set of the instructions. It consisted of 6 pages which I printed out on my printer. Thank you John...so much!

Page 1 begins with a black and white repeat of the box art, over the history of the M3 Grant Mk. I in English with a small illustration of a German Pz.Kpfw. IV tank.

Page 2 continues the history in English, with small illustrations of a M2A1, a M3 light tank, a M3 medium tank and a M3A5 Grant Mk. II.

There is a black and white photo of 3 actual Grants moving across a field with other vehicles far in the background.

Page 3 has painting and decal application instructions down the left side of the page. On the right side is a 5-view of the box art subject. It further shows a number 2 inside the red circle on the sides of the turret and a serial number T23505 towards the rear of the hull sides. (rest of scheme already described above).

Page 4 gives "Read befor assembly" instructions down the left side of the page and the first 5 assembly steps down the right side.

Page 5 has assembly and painting instructions for the crew figures down the left side of the page and assembly steps number 6,7 & 8 on the right.

Page 6 has instructions on how to stretch sprue over heat down the left side of the page over a black and white head-on photo of the kit made up. The right side of the page has assembly steps 9 and 10 for the final steps on it.

Hatches and doors are all seperate. However there is no hull or turret interior details, nor clear parts in the kit. 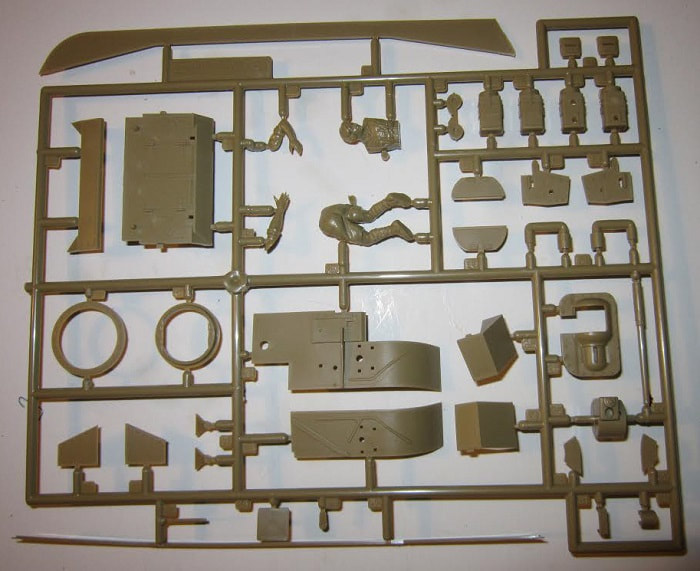 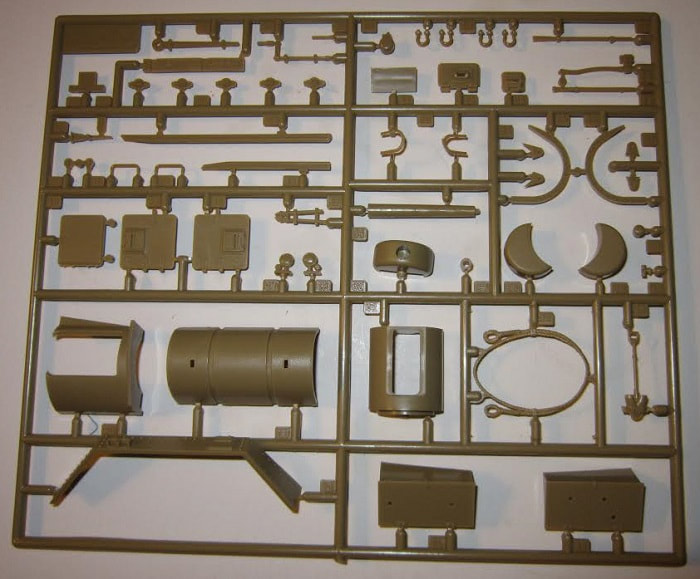 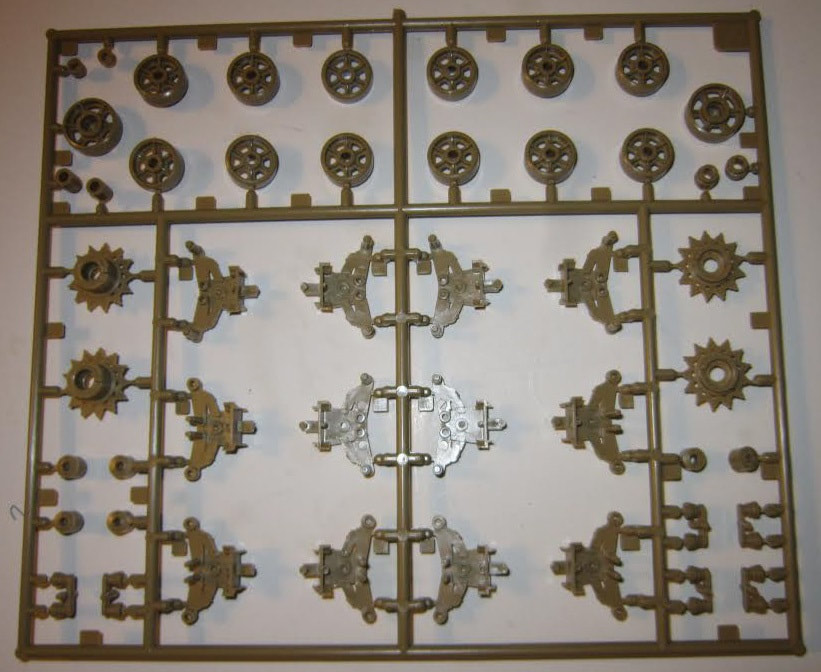 ​The black vinyl treads are next. There are 2 long runs. 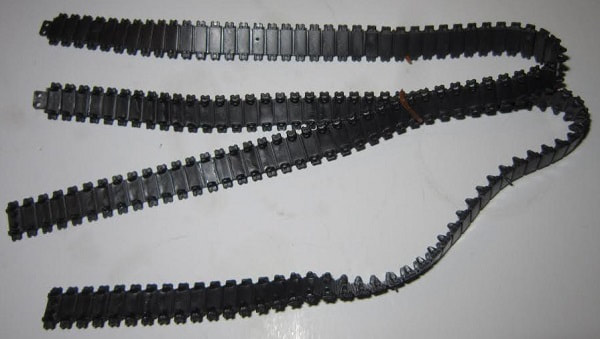 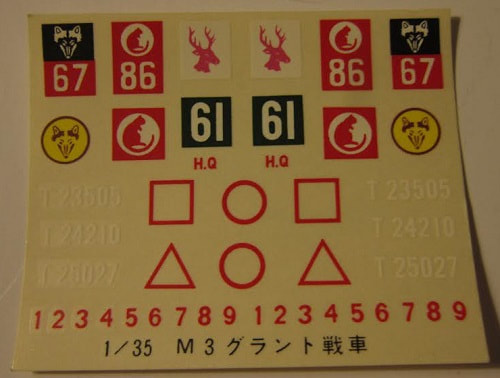 ​There are no clear parts in the kit.

I bought my kit at my local hobby shop 44 years ago.