USS Arizona was a Pennsylvania-class battleship built for and by the United States Navy in the mid-1910s. Named in honor of the 48th state’s recent admission into the union, the ship was the second and last of the Pennsylvania-class of “super-dreadnought” " battleships. Although commissioned in 1916, the ship remained stateside during World War I. Shortly after the end of the war, Arizona was one of a number of American ships that briefly escorted President Woodrow Wilson to the Paris Peace Conference. The ship was sent to Turkey in 1919 at the beginning of the Greco-Turkish War to represent American interests for several months. Several years later, she was transferred to the Pacific Fleet and remained there for the rest of her career.

Aside from a comprehensive modernization in 1929–31, Arizona was regularly used for training exercises between the wars, including the annual Fleet Problems (training exercises). When an earthquake struck Long Beach, California, in 1933, Arizona '​s crew provided aid to the survivors. Two years later, the ship was featured in a James Cagney film, Here Comes the Navy, about the romantic troubles of a sailor. In April 1940, she and the rest of the Pacific Fleet were transferred from California to Pearl Harbor, Hawaii, as a deterrent to Japanese imperialism..

During the Japanese attack on Pearl Harbor on 7 December 1941, Arizona was bombed. She exploded and sank, killing 1,177 officers and crewmen. Unlike many of the other ships sunk or damaged that day, Arizona could not be fully salvaged, though the Navy removed parts of the ship for reuse. The wreck still lies at the bottom of Pearl Harbor and the USS Arizona Memorial, dedicated on 30 May 1962 to all those who died during the attack, straddles the ship's hull.

This kit comes in a very sturdy shrink-wrapped tray and lid type box.

It has been released under several different labels: Banner, Hobby Boss, Trumpeter and this Mini Hobby Models kit. When they developed the kit they were evidently using the age-old Revell-Monogram kit as a reference. While that may not have been the best detailed, the kit is surprisingly good value.

The box says that Mini Hobby Models is in China. However, I think it does not exist anymore, but I may be wrong about that.

The box art shows the Arizona tied up in harbor someplace. Can I assume it’s Pearl Harbor? To the right of the box art is the Arizona’s number BB-39. Below that it says the kit is a collector’s plastic kit with a full hull and 212 parts. A yellow sunburst has “Rememberance Pearl Harbor 1941-2001” on it. Below that is a shield in black white and red with yellow lettering that says “U.S.S. Arizona BAT-ONE” and that the actual model may vary from the box art.

I read on the internet some place that it is illustrated in it’s 1930’s configuration, whatever that means?

One side panel begins with the history of the Arizona, followed by “Contains one unassembled kit and easy to follow pictorial instructions. Paint and cement required to complete model as pictured on box. Suitable for ages 14 to adult. Scale is 1/350th “ This is in English, Spanish, German, French and Chinese. Each marked with a color illustration of the flag of the country that speaks those languages. Next is a black and white photo of the Arizona at anchor with another ship parked outboard of her. MADE IN CHINA is shown.

The other side panel has a color 2-view illustration of the Arizona, showing it from above and in profile. MADE IN CHINA again appears.

The kit contains 4 dark grey trees of parts (in 3 un-sealed cello bags), a loose individual dark grey hull top, individual dark grey parts of the fore, aft, middle and upper deck parts (in a un-sealed cello bag together), 2 jet black trees in a un-sealed cello, the decal sheet, 8 small metal screws in a small stapled shut cello , a loose length of metal rod and the instructions. I don’t know what the screws and rod are for as they are shown nowhere in the assembly instructions. I think, because this kit was obviously marketed also as a motorized kit, that the screws and rod had something to do with the motorization. At any rate they are excess in this kit.

At each end of the box there is a white box with a hole in the side to accept the bow and stern of the hull part. Very good packaging!! The box is jam packed with stuff.

The instructions consist of a single sheet that accordion folds out into 8 pages in 8 ½” x 11” page format.

Page 1 of the instructions begins with a black and white repeat of the box art, followed by international assembly symbol explanations and the decal application instructions in Chinese and English.

Page 2 through 6 give a grand total of 10 assembly steps.

Pages 7 and 8 have the parts trees illustrations.

There are two identical jet black letter A parts trees. They hold the parts of the base cradle (3 parts each) 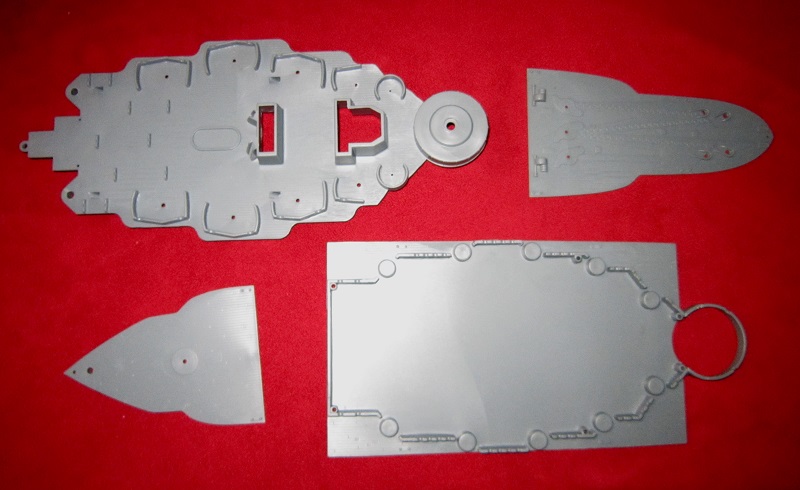 The decal sheet has an American flag that you fold to get both sides of it, vertical numbers that go on the sides of hull bow and stern and the name ARIZONA for the stern and aircraft insignia, Also on this sheet are the words NAVY, WING, BOT, STERN and BOW. However, the instructions do not show where these go on the model. 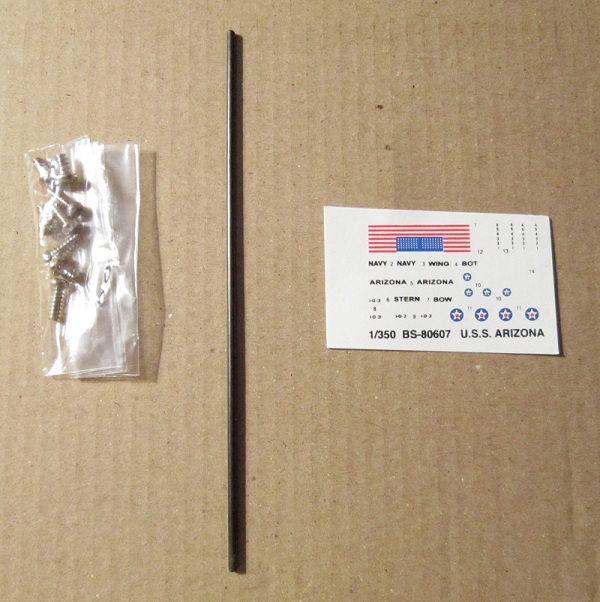 Just like its larger cousin, the 1/200 Trumpeter, this model comes with a hull that is split on the waterline. This is a huge advantage over the old Revell kit if you want to build a waterline model.

This is a neat kit of a very historical ship. I have the old Revell kit of the Arizona and it is in a odd “FIT THE BOX” scale. I highly recommend it to modelers of average building skills.

This is not a top-shelf model like Tamiya or Hasegawa, but it's not terrible either. Considering how cheap it is compared to other 1:350 kits of this size, it holds tremendous value. Besides, this is the only 1/350 version of this ship at this time. It is also a pretty easy build.

Inside the lower hull is a molded in battery compartment to hold a number of AA batteries - a tell-tale sign this kit was originally designed as a motorized model. This is promising for those of us that are drawn to converting plastic kits to RC..

This kit is well worth the money, despite any flaws. In the right hands things can be fixed with some extra work I’m told.

There are also some aftermarket brass gun barrels and photo-etched parts (Eduard has an expensive set designed for just this kit, available at one time from Hobby Link Japan at $73.97) .also Tom's Models, White Ensign and Lion Roar have stuff for it. Adding any of these can make a show stopping  model.

The price is right, compared to some of the other brands that do an Arizona. This  adds to the good bang for your buck. It can be picked up usually on the internet for around $35.

I bought my kit at Hobby Lobby using a 50% off coupon I printed off their web site. Nice to get a bargain.