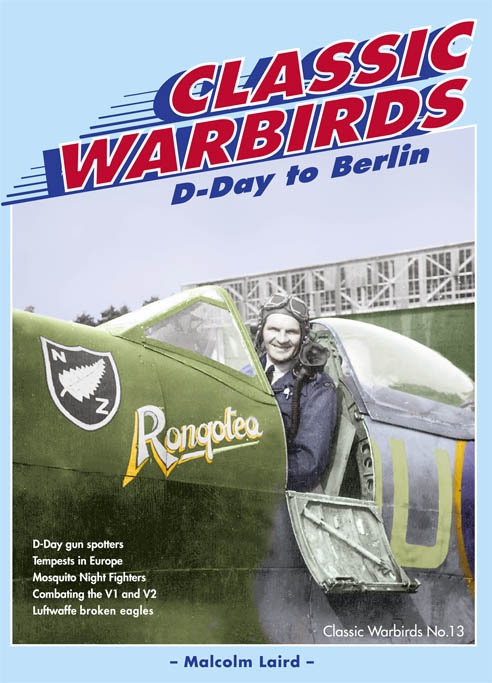 Classic Warbirds No. 13
D-Day to Berlin
Review of
Classic Warbirds No. 13
D-Day to Berlin
Author: Malcolm Laird
Mushroom Model Publications/Ventura/Stratus
ISBN: 978-0-9864653-1-4
By
Ray Mehlberger
MSRP: £9.99
Mushroom Model Publications is based in the UK. They have all their books printed in English in Sandomierz Poland by Stratus. Stratus also does their own series of books in Polish and English. Apparently Ventura also is associated with Stratus as this book was sent to me directly from Stratus. It was packaged in several layers of heavy cardboard along with a second book. Both books arrived in pristine condition.

“From D-Day to Berlin” is a revised and expanded reprint of Classic Warbirds No. 5. Most of the new material is Luftwaffe “broken eagle” photos from 1945 and an RAF Beaufighter story with previously unpublished photos from private collections. Stories from the mid 1944 until the post war occupation force are included. When possible, each chapter is based on interviews with individuals who were there. The book endeavors to avoid repeating “potted histories” of various air battles.

For the fighter squadrons of the RAF’s Second Tactical Air Force and the USAAF 8th and 9th Air Forces this period was particularly intense. From supporting the Normandy invasion itself and later encountering increased Luftwaffe opposition as the air war was fought increasingly over German soil.

Add to this the increasing sophistication and sheer magnitude of the 8th Air Force strategic daytime bombing campaiSgn over the Third Reich. From these campaigns comes the content of this book and a wealth of material for modelers and aviation enthusiasts alike.

Where possible, each chapter is from the perspective of individuals who were there. Each story is illustrated with many photos. There are 110 black and white wartime photos in the book. Fifty-six of these photos are of pilots and crew members in front of various aircraft. There is one photo of the No. 451 Squadron logo.

Color profile illustrations are: a 5-view of a Spitfire Mk. VII named “Isabel II” with a line drawing of the cockpit and retractable tail wheel. This aircraft was flown by Flight Lieutenant Jack Cleland.
A Mosquito NF. XVII
A Spitfire Mk. XVI as a 2 view.
A Spitfire Mk. IXc
A Spitfire FR. XIV
A P-51c as a 2-view and a 3-view.
A Hawker Tempest Mk. V as a 2-view and illustrations of upper and lower invasion stripe patterns for the wings.
A P-51D as a 3-view, with nose caption “OL FLAK JO”.
A F-6D as a 3-view, with nose caption “Lil Margaret”.
A Spitfire LF. XVI as a 4-view and a 1-view.
A Beaufighter TF-X
A Spitfire FR. XIV as a 2-view
On the back cover of the book are 6 more color profiles. They are:
A Seafire L. III
A Hawker Tempest
A Mosquito NF-30
A FW-190D-9
A Beaufighter Mk. X

I want to thank Dr. Roger M. Wallsgrove, Editor-in-Chief of Mushroom Model Publications (MMP) and the folks at Stratus and Ventura for this review copy.

Information on all MMP books can be found at their website:
www.mmpbooks.biz