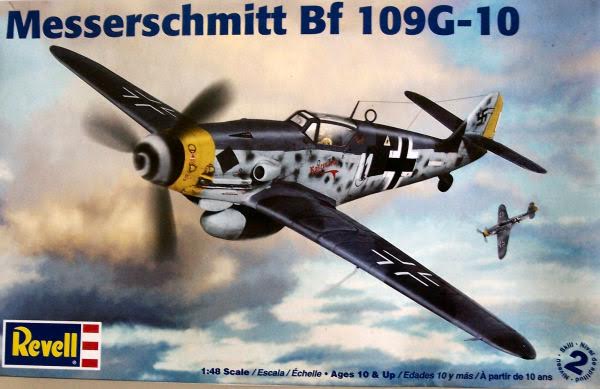 The Messerschmitt Bf 109, commonly called the Me 109[2] (most often by Allied aircrew and even amongst the German aces themselves, even though this was not the official German designation), is a German World War II fighter aircraft designed by Willy Messerschmitt and Robert Lusser during the early to mid-1930s.

The "Bf 109" designation was issued by the German ministry of aviation and represents the developing company Bayerische Flugzeugwerke (at which the engineer Messerschmitt led the development of the plane) and a rather arbitrary figure. It was one of the first truly modern fighters of the era, including such features as all-metal monocoque construction, a closed canopy, and retractable landing gear. It was powered by a liquid-cooled, inverted-V12 aero engine.

The Bf 109 first saw operational service during the Spanish Civil War and was still in service at the dawn of the jet age at the end of World War II, during which time it was the backbone of the Luftwaffe's fighter force. From the end of 1941, the Bf 109 was steadily being supplemented by the superior Focke-Wulf Fw 190.

Originally conceived as an interceptor, later models were developed to fulfill multiple tasks, serving as bomber escort, fighter-bomber, day-, night-, all-weather fighter, ground-attack aircraft, and as reconnaissance aircraft. It was supplied to and operated by several states during World War II, and served with several countries for many years after the war. The Bf 109 was the most produced fighter aircraft in history, with a total of 33,984 airframes produced from 1936 up to April 1945.

The Bf 109 was flown by the three top-scoring German fighter aces of World War II, who claimed 928 victories among them while flying with Jagdgeschwader 52, mainly on the Eastern Front. The highest scoring fighter ace of all time, Erich Hartmann of Germany, flew the Bf 109 and was credited with 352 victories (and also survived the war).

The plane was also flown by Hans-Joachim Marseille, the highest scoring German ace in the North African Campaign who scored 158 victories - 154 of which were against fighter aircraft flown by western-trained pilots. It was also flown by several other aces from Germany's allies, notably Finn Ilmari Juutilainen, the highest scoring non-German ace on the type with 58 victories flying the Bf 109G, and pilots from Italy, Romania, Croatia, Bulgaria and Hungary.

Through constant development, the Bf 109 remained competitive with the latest Allied fighter aircraft until the end of the war.

The later G series (G-5 through G-14) was produced in a multitude of variants, with uprated armament and provision for a number of kits of pre-packaged, generally factory- installed parts known as Umrüst-Bausätze (usually contracted to Umbau) and adding a "/U" suffix to the aircraft designation when installed.

Field kits known as Rüstsätze were also available for the G-series but those did not change the aircraft designation.

By early 1944 tactical requirements resulted in the addition of MW-50 water injection boost and high-performance superchargers, boosting engine output to 1,800–2,000 PS (1,775-1,973 HP). From early 1944 a number of G-2s, G-3s, G-4s and G-6s were converted to two seat trainers, known as the G-12. An instructor's cockpit was added behind the original cockpit and both were covered by an elongated, glazed canopy.

The so-called Rüstsätze field modification kits and Umrüst-Bausätze factory conversion kits were part of a system promulgated by the RLM as a whole, throughout the German military aviation industry, with each airframe type number having its own set of "/R" and/or "/U" numbered designations for such upgrade packages.
​THE KIT:

Revell is an old prolific model company based in the U.S. In recent years they have partnered up with Monogram. They make all manner of model subjects in the popular scales.

The box art shows a Bf-109G-10 as an aircraft of JG.52. It has a dark gray spine over light blue below. There are dark gray spots over the light blue.

The fuselage code begins with a white 11 + white  horizontal bar. The national cross is quite large. The rudder is yellow as well as the nose. The swastika appears on the tail. The propeller spinner has a black and white spiral on it. There is a black diamond on the side of the cowling. The name ROSEMARIE is in black below the cockpit.

Very strangely, there is another Bf-109G-10 diving in the background with the exact same paint scheme and markings. These marks are supplied on the kit’s decal sheet.

The box art says that the kit is for ages 10 and up.

One side panel has a list of colors suggested to use to finish the kit, next to a photo of the model assembled with the box art marks and scheme. It is followed by a profile of another scheme.

This one is the mount of pilot Feldwebel Horst Petzschler of III/JG 51, Bulltata, Sweden 1945. It is light blue with dark gray splotches. The fuselage code is a yellow 5 + black 0297. It also has a black and white spiral on the propeller spinner. The rudder is light gray with dark green spots and the swastika.

This is the second of the two schemes provided on the kit’s decal sheet. Next to this is Revell’s address in Elk Grove Village, Illinois USA.

The other side panel has a list of the kit’s features:

Below this is a one paragraph history of the aircraft.
​WHAT'S IN THE BOX:

Inside the box are 3 light gray parts trees in a sealed cello bag and a clear parts tree in its own cello bag. The instructions and the decal sheet complete the kits contents. The decal sheet has an opaque protective tissue on it’s face to protect it from scratching. However, this sheet is loose and floating around and not protecting the decal at all.

Revell has added a stiff cardboard BRIDGE across the center of the box to ward against the box being crushed in transit.

The instructions consist of a unbound booklet of 8 pages in 8 ½” x 11” format.

Page 1 begins with the history of the aircraft next to a very dark and dismal photo of the model made up in the box art scheme. This is followed by international assembly symbol explanations, READ BEFOR BEGINNING instructions and a paint guide.

Pages 2 through 6 give a total of 8 assembly steps.

Page 7 has two 2-views of the 2 schemes described above.

Page 8 has views of the top and bottom of the aircraft. Below this is a 3-view line drawing that serves as the guide showing where to place all the stencil marks.

Mention is made here that a Bf-109G-10 can be seen at the Planes of Fame Museum at Valle Airport, Grand Canyon Valley, Arizona USA. The museum is thanked for their assistance in developing this model kit.

There are no part tree illustrations in the kit.

The trees have part numbers next to the parts, but they are not alphabetized. So, this means a search of the trees to find the parts needed in each assembly. However, because the kit has so few parts this will not be a big chore and most of the parts are pretty obvious as to what they are.

The first light gray parts tree holds: the fuselage halves, pilot seat, horizontal tail surfaces and the dashboard (6 parts) The elevator flaps are molded in sold as well as the rudder. 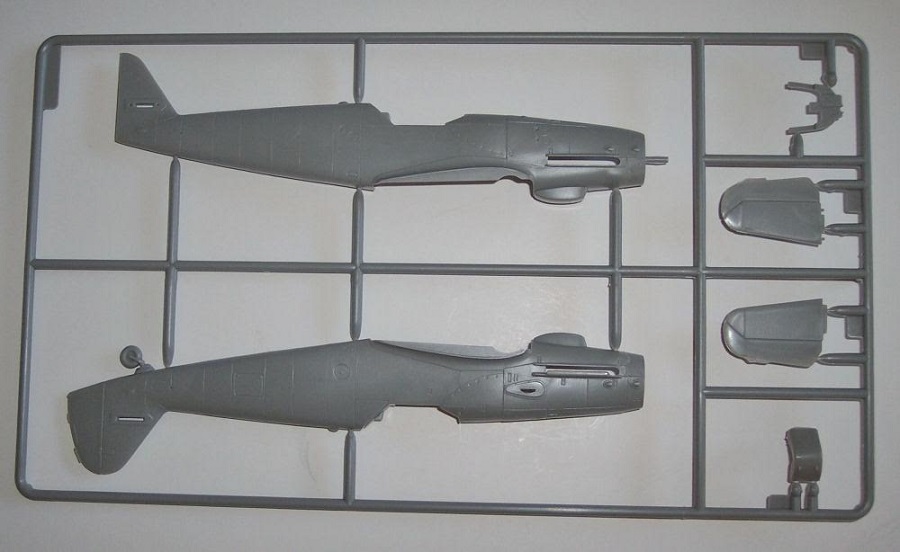 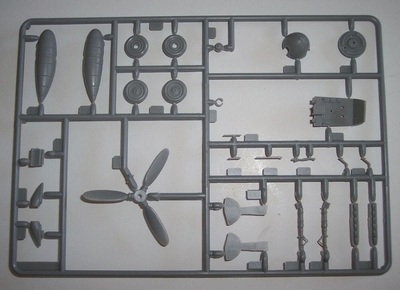 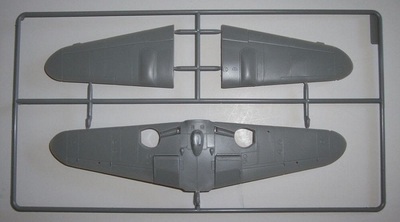 There is no pilot figure included in the kit. 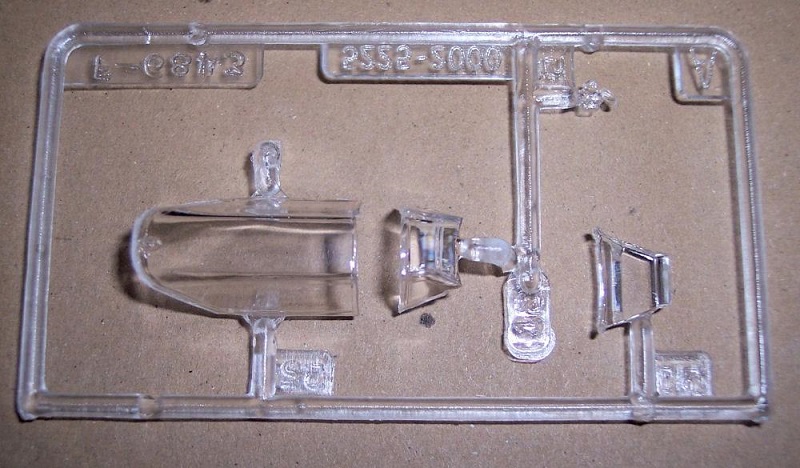 ​The decal sheet holds the marks for the 2 schemes described above. Also numerous stencil markings, dashboard instruments and the swastika for the tail. 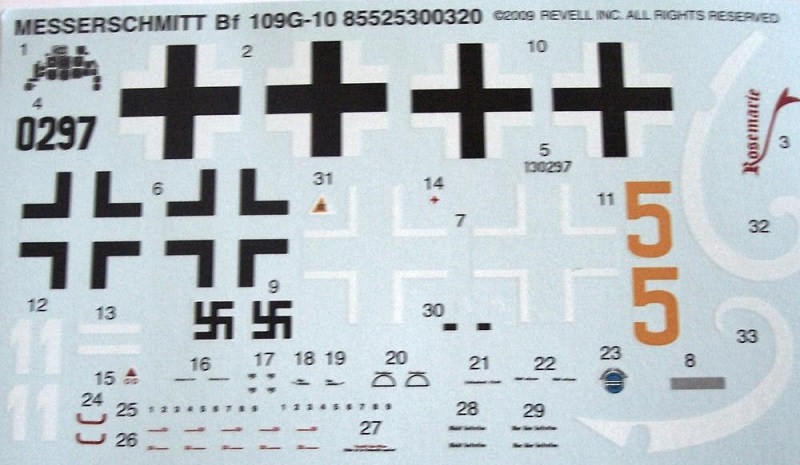 ​This last item is one that is missing in all Revell of Germany produced WWII German aircraft kits, due to the restriction against that mark there. It is included with this kit and shown on the box art, due to it being made in the U.S.

With only 40 total parts, the kit is sparsely detailed in the cockpit and as mentioned the rudder and flaps are molded solid.

The wheel wells in the wings are just HOLES with no detail.

So, the kit seriously needs some after-market stuff to dolly it up. Which I discovered there are no end to for Bf-109G’s, especially PE sets for the cockpit. Some of these PE sets are actually already colored.
I bought my kit at the local Hobby Lobby store with a 40% off coupon that was on Hobby Lobby's web site that I down printed. Nice to get a bargain once in a while.