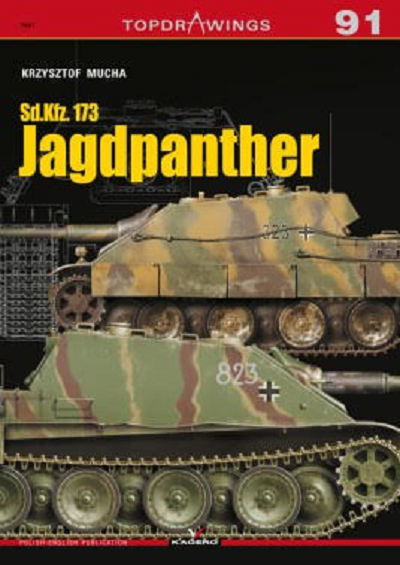 The Sd.Kfz. 173 Jagdpanther is a German tank destroyer developed by Krupp and Daimler-Benz. The order was placed in August 1943 and the vehicle entered service the first month of 1944.

It was armed with a very effective anti-tank gun, PaK 43 cal. 88 mm. The destroyer’s combat compartment was armoured with 40 to 100 mm thick front plate armour plates .

From January 1944, 415 pieces were produced at the MIAG, MNH and MBA factories. The vehicle was based on the chassis of the Panther Ausf. G, but it didn’t have as many technical problems as the mentioned tank.

Due to the favorable power-to-weight ratio, the Jagdpanther had good performance and maneuverability. Together with a powerful cannon, which was able to destroy any Allied armoured vehicle at that time, it made it an extremely effective and dangerous destroyer,

Vehicles were used by independent destroyer battalions. Jagdpanthers debuted in Normandy in 1944 with the 555th and 654th Panzerjager Abteilungs, achieving great successes. Also during the offensive in the Ardennes, the Allies took a toll on them.

They appeared on the Eastern Front in the autumn of 1944, effectively fighting all Soviet  armoured guns and heavy tanks, including  the IS-2. The vehicle was produced in two main variants. The early version – designated  as G1 – had a smaller yoke that was welded to the hull, a modified engine compartment from the Panther Ausf. A and two driver’s visors.

In the later version –G2- the Panther Ausf. G engine compartment was used, one driver’s visor and a larger yoke which was bolted to the front plate with screws. There were also many hybrid variants combining the features of both version.

Until September 1944, Jagdpanthers were covered with Zimmerit in the form of characteristic squares, and not more popular “snakes”. Jagdpanthers proved to be the most effective German tank destroyers, but they appeared too late and in too few numbers to significantly influence the course of the war.

This book comes in Polish and English text.

The cover art show color illustrations of 2 Jagdpanthers posed against a black background that has a white line drawing of the the tracks as seen from the front.

The Jagdpanther at the top is in a base of sand yellow with wide vertical bands of dark green, It’s hull number is a red 323 outlined in white, followed by a small German cross.

The Jagdpanther at the bottom is also in a base of sand yellow with narrow green vertical bands outlined with off-white. It has a white hull number of 823 followed by the German cross.

Page 1 of the book has a short history of the Jagdpanther in Polish and English.

In 1/72nd scale there are two 5-views of the Jagdpanther.

There are 10 color profiles of the Jagdpanther.

This is one neat book. It will be of much interest to modeler’s who plan on building a Jagdpanther and to AFV historians alike,

I want to sincerely thank Casemate Publishers, the North American distributor of Kagero books for this review sample. All Kagero book titles can be viewed on Casemate’s website at:
www.casematepublishers.com
​Highly recommended.