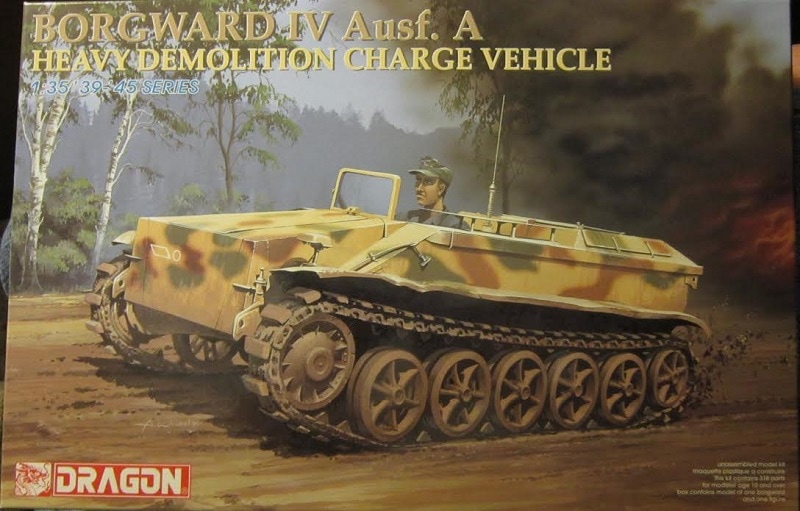 The kit has a copyright date of 1999 and I paid $14.38 for mine back then, according to the price sticker still on the box.
​HISTORY:

The Borgward IV, officially designated Schwerer Ladungsträger Borgward B IV (heavy explosive carrier Borgward B IV), was a German remote-controlled demolition vehicle used in World War II.
During World War II, the Wehrmacht used three remotely operated demolition tanks: the light Goliath (Sd.Kfz. 302/303a/303b), the medium Springer (Sd.Kfz. 304) and the heavy Borgward IV (Sd.Kfz. 301). The Borgward IV was the largest of the vehicles and the only one capable of releasing its explosives before detonating; the two smaller vehicles were destroyed when their explosive charges detonated.

Borgward originally developed the B IV as an ammunition carrier, but it was found unsuitable. It was also tested as a remote minesweeper, but was too vulnerable to mines and too expensive. During the Battle of France, German engineers from the 1st Panzer Division converted 10 Panzer I Ausf Bs into demolition and mine clearing vehicles, using them to place timed charges on bunkers or minefields without losing the vehicle. The Waffenamt found the idea valuable, and ordered the B IV's development as a remote-controlled demolition vehicle. The first vehicles were delivered in 1942.

DML Dragon is a prolific model company based in Honk Kong, China.

It is in a base of earth-yellow with dark green and red brown wide wave pattern over it. There is a wite tactical mark on the left side of the bow.

The driver is in a Panzer grey uniform with a soft field cap.

​These are followed by a CAUTION to be in a well ventilated room when using cement and paint, in 6 languages including English.

There is a gold triangular sticker stuck to one corner of the shrink-wrap, that says "Advance Scout".

The other side panel says the kit is not suitable for children under 3 because of small parts that they may accidentally ingest. The importer for Europe is Italeri and their address is shown. There is a 3-view done as a outline illustration in white of the vehicle. Copyright is given as 1999 over DML's stree address in Hong Kong, China and the kit was made there.

This kit contains 15 light grey trees in 4 sealed cello bags, a clear part, the decal sheet and the instructions.

Page 1 begins with a black and white repeat of the box art over the parts trees illustrations.

Page 2 begins with CAUTIONS about the kit, over international assembly symbol explanations and a suggested color listing of either Gunze Sangyo or Italeri brands of hobby paints, in 6 languages, including English.

Pages 3 through 5 give a grand total of 15 assembly steps.

Page 6 is the marking and painting instructions, with four 4-views down the left side of the page and decal application instructions in 6 languages down the right side. The copyright of 1999 appears here again and printing was done in Hong Kong, China.

1. The box art scheme (already described above). It is a vehicle with Panzer-Kompanie 315 (FKL), France, Spring/Summer 1944.

2. A Borgward IV in a base of earth yellow with thin squiggles of dark green on it. It has a white no. 7 in the center of the rear. It is a vehicle with Panzer-Abteilung 300 (FL), Crimea, Russia, May/June 1942.

3. A Borgward IV in overall earth yellow with no markings. It is with Versuchskommando (FL) Tropen, North Africa, Summer 1942.

4. A Borgward IV in overall Panzer-grey with no markings. It is with Panzer-Kompanie "Von Abenroth" (formerly 1./Panzer-Abteillung 300 (FL), Southern Front, Russia, Winter 1942/1943.

There are 4 identical light-grey letters S, V and W trees. They are co-joined together. A further square tree is co-joined to these 3, but not illustrated in the instructions. I assume it is therefore excess and not needed.

The 4 S trees hold individual track links (52 parts per tree) and is co joined with W tree which contains the road wheels. 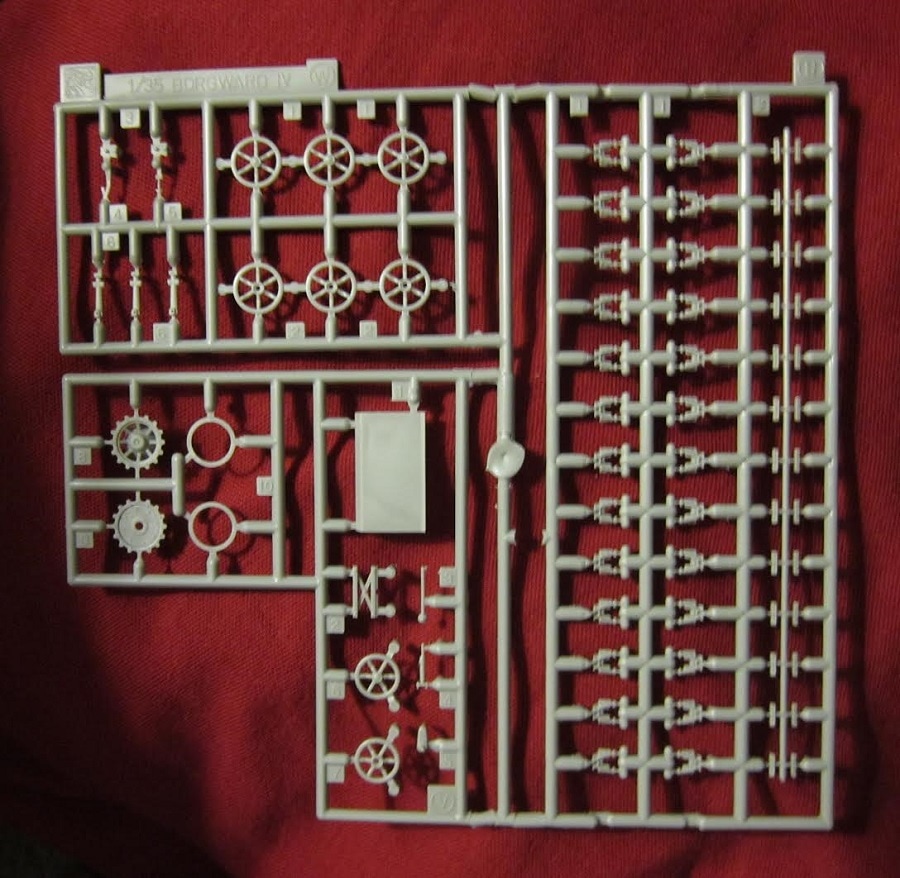 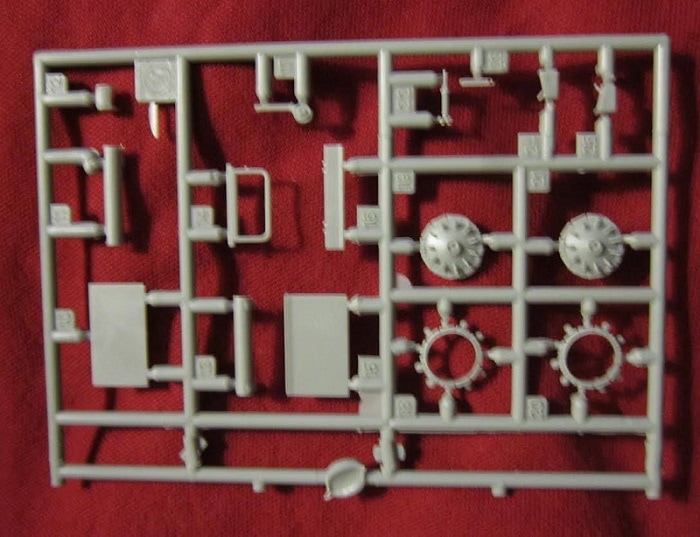 The small letter Z parts tree holds the driver figure (divided into separate body, arms, head and field cap. (7 parts) Two parts are shaded out in the parts illustrations as being excess and not needed. The large Z tree contains the hull parts. 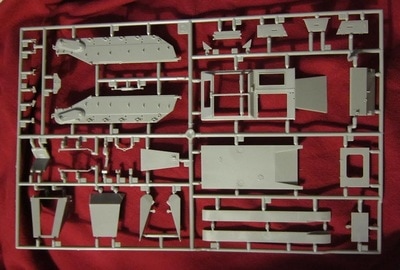 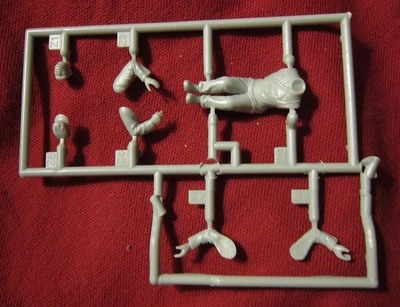 ​The clear windshield pane, Part A, is die-cut out of thin clear plastic sheet. 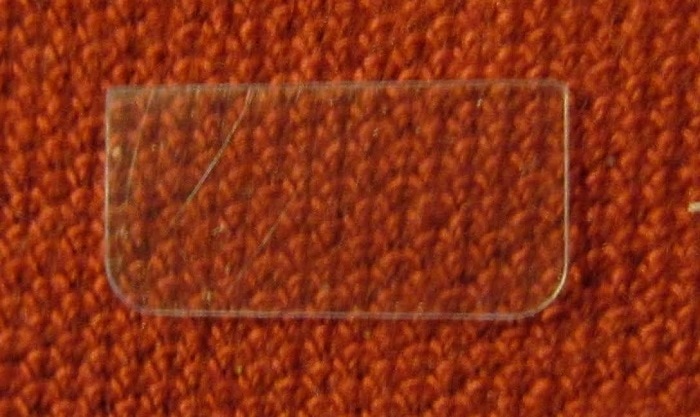 ​The decal sheet completes the kits contents.
This kit has nice detail and is an unusual subject that will draw stares sitting on a display shelf.

Highly recommended
I purchased my kit back in the 90's at my local hobby shop.