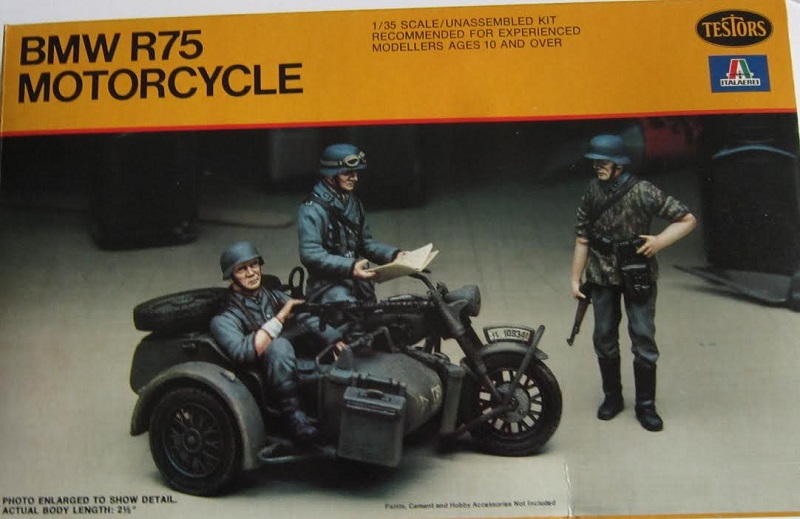 Few photographs of German troops in action during the early years of WWII are without at least one motorcycle/sidecar combination. Although all the combatants employed motorcycles to some extent, none used them anywhere near the numbers that Nazi Germany did. Motorcycle-equipped units were an integral part of nearly every combat formation in the German Army and SS, and even some Luftwaffe and naval units as well. They were so numerous that along with the tank and the dive bomber, motorcycle-equipped units became almost synonymous in the public's mind with the German "Blitzkrieg" tactics.

Motorcycle/sidecar combinations were employed in many different roles, including liason and communication, traffic control, military police, anti-partisan patrols and airfield security (by the Luftwaffe). But their most spectacular use was in the hands of Germany's reconnaissance troops. Firing green tracer ammunition from their sidecar-mounted machine guns, the motorcycle troops were attached to all combat divisions. They considered themselves an elite force, especially after their lightning successes in the early campaigns. However, when confronted by stiff resistance, their lack of armor plating and heavy weapons often times led to severe casualties.

Though fast and maneuverable in European terrain, the motorcycle units found the sands of North Africa and the ice and mud of the Eastern Front less compatible with their mounts, and their usefulness became somewhat limited. For this reason, many reconnaissance units had their motorcycle combinations replaced by the Volkswagen "Kubelwagen" or "Schwimmwagen" from 1943 on, though many motorcycles served on until the end of hostilities.

While a great many makes of motorcycles (many of them were captured enemy machines) were used by Germany, none was more famous or highly regarded than the BMW R-75, manufactured by the Bavarian Motor Works of Munich. Production of this large, powerful machine began in 1940 and continued into 1944. By 1944 many thousands had been produced and had seen service in the campaigns in France, the Low Countries, North Africa, Italy, and the Eastern Front. Though occsassionally employed as a "solo" machine, the R-75 was most commonly seen fitted with a side car, which was designed to also fit several other makes of motocycles. So reliable and useful was the BMW R-75, that a nearly identical copy, designated M-72, was produced in the Soviet Union during and after the war. Some still serve in Warsaw-Pact armies today.

Italeri is an older prolific model company based in Italy. They market all manner of model subjects in the popular scales. Testors was their U.S. distributor at one time.
THE KIT:

This kit came in a shrink-wrapped end-opening type box that is blousy. It has a slide-out tray inside. While I am no fan of end-opening boxes (parts find their way past the end-flaps to become lost), the slide-out tray cures that problem.

The box are shows a color photograph of the motorcycle and figures made up and posed atop a modeler's work bench.

The motorcycle/sidecar is in overall Panzer-grey with a white license plate atop the front fender of the motorcycle with black number SS-109341 on it. Both riders wear Panzer-grey uniforms with steel helmets The motorcycle rider has binoculars strung over his helmet andis reading a map. The sidecar passenger is manning a MG 34 machine gun.

A third figure is standing beside the motorcycle/sidecar. He is dressed the same as the other 2 figures and is carrying a rifle.

The box art says the kit is recommende for experienced modelers ages 10 and over.
The bottom of the box has 4 color walk-around type photos of the model made up. This model build is credited to Mike Good. 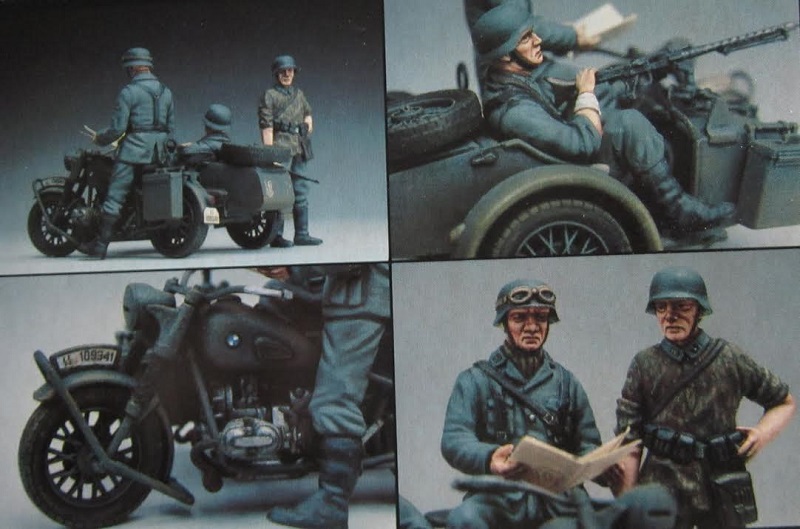 The other side panel has a short history of the motorcycle/sidecar combination.
​WHAT'S IN THE BOX:

This kit contains 2 Panzer-grey trees of parts in a sealed cello bag, the decal sheet, the instructions and a small color kit and paint catalog. 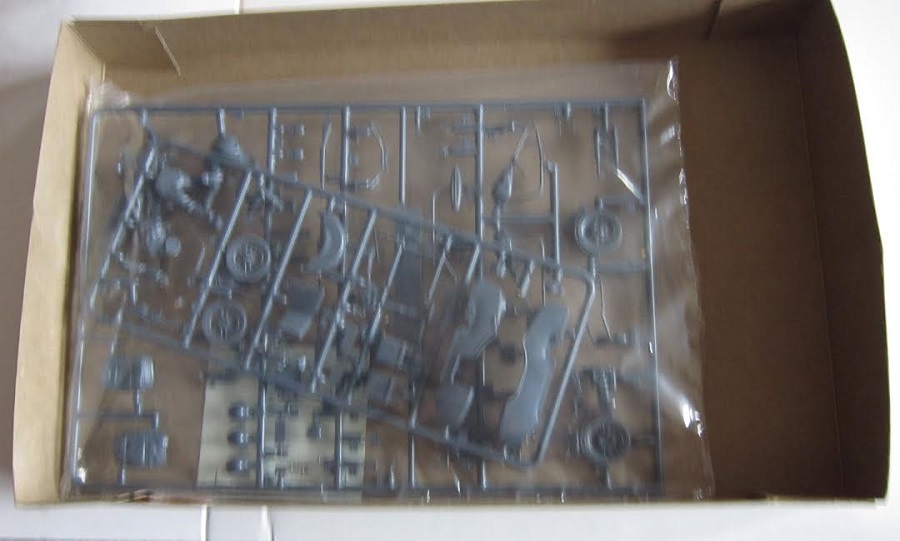 ​The instructions consist of a un-bound booklet of 8 pages in 8 1/2" x 11" page format, folded in the center to fit the box.

Page 1 of the instructions begins with a black and white photo of the motorcycle/sidecar and figures made up, followed by the history of the bike, BEFORE STARTING, PREPERATION OF PARTS, PAINTING and DETAIL PAINTING instructions.

Page 2 through 5 give a grand total of 6 assembly steps.

There is a lot of text in each assembly to walk you through them step by step.

The bottom of page 5 has a customer service coupon to use to get any assistance with the kit.

Page 6 has long instructions for figure painting and weathering hints.

Page 7 has the decal application instructions and a 3-view illustration for marking and painting the motorcycle/sidecar. Bellow this is shown 3 marking schemes. The marks are alphabetically labeled and you put them on the model where the 3-view shows the lettered marks go.

The second scheme is for the Motorcycle Messenger Unit, 100th "Jaeger" Division, in overall Panzer-grey.

The third scheme is for the Armored Recconnaisance Battalion, XII SS Panzer Division, in overall Panzer-grey.

The parts trees are labeled with geometric symbols - a star and a circle - rather than alphabetically like in most other model kits. 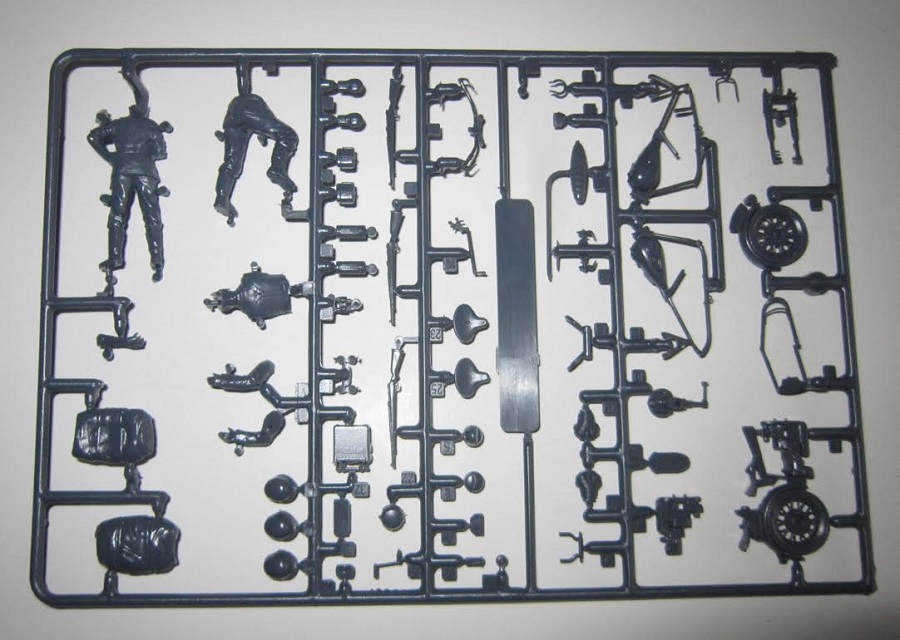 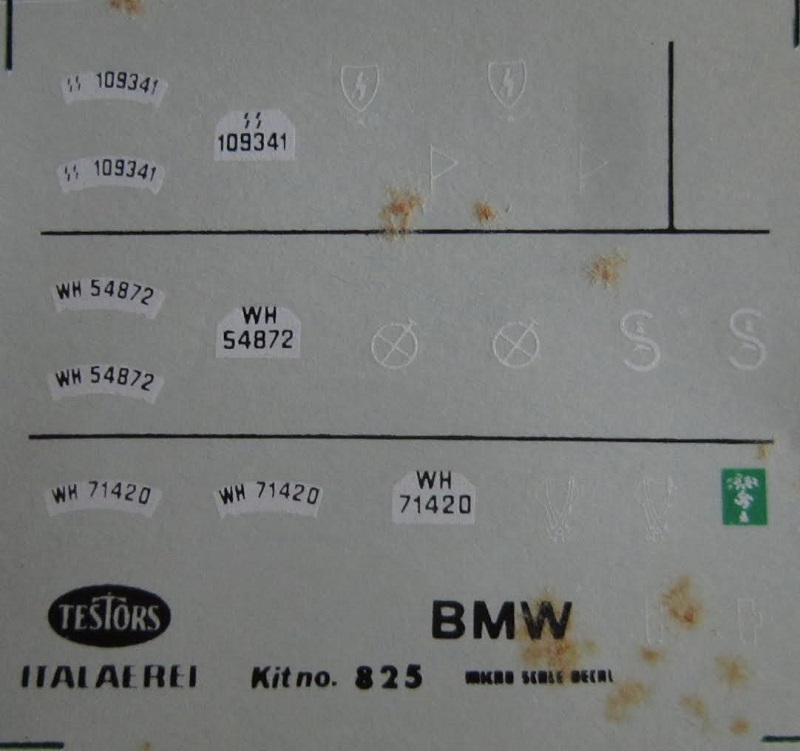 This is a very nice older kit with good detail. Recommended.
​Kit was courtesy of my wallet years ago.