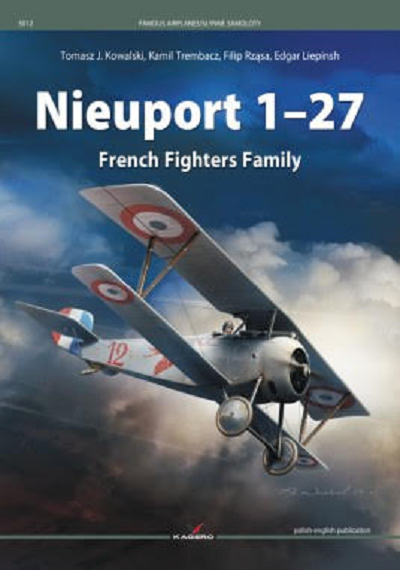 The designation of Nieuport is linked with the origins of aviation. Eduard de Nieuport (August 24, 1879 – September 16, 1911) – a pilot and designer – was one of the aviation pioneers.

In 1909, he established the Societe d’ Aerolocomotion aircraft factory in Suresnes, manufacturing airplanes of his design. He was one of the few designers who preferred the monoplane layout with the smallest possible number of drag-increasing items.

The first construction, the Nieuport I, did not distinguish itself in performance, but it was kind of a laboratory which enabled the designer to develop his new brainchild, the Nieuport II of 1910, into a machine singled out for its novel solutions: the fabric-covered fuselage with the pilot’s seat so arranged that only his head would protrude above the fuselage, or the landing gear with the wheels attached to a skid through a steel suspension spring.

Kagero Publishing is based in Lublin Poland.

The cover art shows a color illustration of a Nieuport 17C-1 in flight above the clouds. It is overall bare metal, with a French vertical tri-color (red, white & blue) on the rudder, a red number 12 followed by a red bird in flight, with “PERE DORME 3” above it on the sides of the fuselage. It was flown by Rene Dorme (23 air victories) at number 3 Escadrille.

This aircraft appears again as a color side profile on the back cover.

This is one neat book. It will be of great interest to modelers who intend to build the Copper State Neiuport kits and also aviation historians.

I wish to thank Casemate Publishers for this review sample.

They are the North American distributor of Kagero books and all the Kagero titles can be seen on their website at:
www.casematepublishers.com