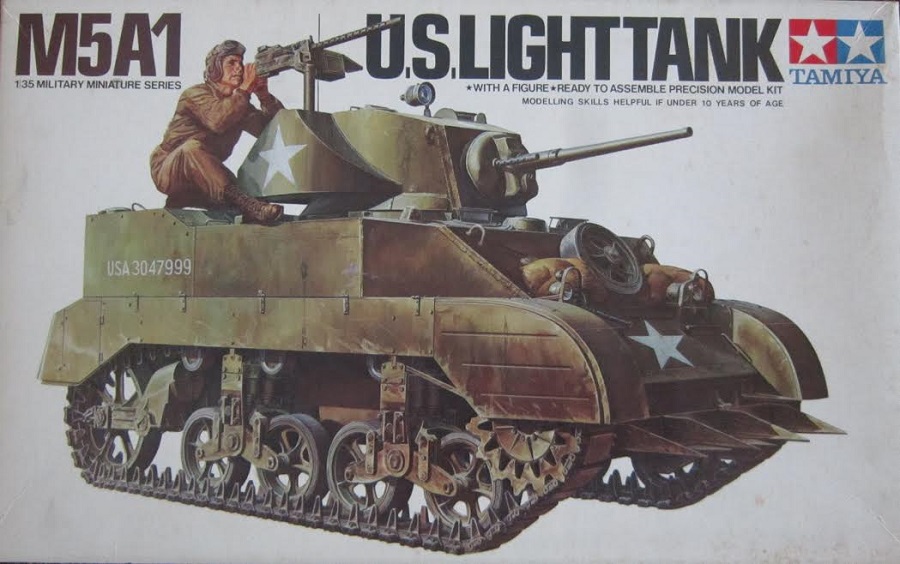 
The M3 Stuart, formally Light Tank M3, is an American light tank of World War II. It was supplied to British and Commonwealth forces under lend-lease prior to the entry of the U.S. into the war. Thereafter, it was used by U.S. and Allied forces until the end of the war.

The name General Stuart or Stuart given by the British comes from the American Civil War Confederate General J.E.B. Stuart and was used for both the M3 and the derivative M5 Light Tank. In British service, it also had the unofficial nickname of Honey after a tank driver remarked "She's a honey".[1] To the United States Army, the tanks were officially known only as "Light Tank M3" and "Light Tank M5".

Observing events in Europe, American tank designers realized that the Light Tank M2 was becoming obsolete and set about improving it. The upgraded design, with thicker armor, modified suspension and new gun recoil system was called "Light Tank M3". Production of the vehicle started in March 1941 and continued until October 1943. Like its direct predecessor, the M2A4, the M3 was initially armed with a 37mm M5 gun and five .30-06 Browning M1919A4machine guns: coaxial with the gun, on top of the turret in an M20 anti-aircraft mount, in a ball mount in right bow, and in the right and left hull sponsons. Later, the gun was replaced with the slightly longer M6, and the sponson machine guns were removed.

Internally, the radial engine was at the rear and the transmission to the driving sprockets at the front. The prop shaft connecting the two ran through the middle of the fighting compartment. The radial engine compounded the problem, having its crankshaft high off the hull bottom.[4] When a turret floor was introduced the crew had less room. The rear idler sprocket was moved to a trailing (ground contact) position.

To relieve the demand for the radial aero-engines used in the M3, a new version was developed using twin Cadillac V-8 automobile engines and twin Hydra-Matic transmissions operating through a transfer case. This variation was quieter, cooler and roomier. Owing to its automatic transmission it also simplified crew training. The new model (initially called M4 but redesignated M5 to avoid confusion with the M4 Sherman[5]) also featured a redesigned hull with slopedglacis plate and driver's hatches moved to the top. Although the main criticism from the units using it was that the Stuarts lacked firepower, the improved M5 series kept the same 37 mm gun. The M5 gradually replaced the M3 in production from 1942 and, after the M7 project proved unsatisfactory, was succeeded by the Light Tank M24 in 1944.

Tamiya is an older prolific model company based in Shizuoka City, Japan. They make all manner of model kits in the popular scales.

The box art shows a M5A1 posed against one of Tamiya’s “SIGNATURE” all-white backgrounds that they use on the majority of their kit boxes.

The tank is overall olive-drab with a white star on the turret sides and the front of the hull. The white serial no. USA 3047999 is on the rear of the hull sides. A crewman is kneeling behind the turret and manning a 30 cal. machine gun mounted on top.

One side panel has a small color repeat of the box art, followed by the history of the M5A1 in English and color illustrations of on-tank tools. Tamiya’s address in Japan is also provided here.

The other side panel has color box arts of 4 other AFV models that Tamiya markets:

A U.S. Military Police set with a Harley motorcycle, a rider figure and a standing traffic-directing MP

No kit numbers are shown for these 4.

The instructions consist of a long 8 ½” x 24” sheet printed on both sides and folded twice along it’s length to fit the box.

The face side of the instructions begins with a black and white photo of the model built up twice and in the box art markings showing the left and right sides. One kit behind the other.  In this photo the white nickname VICTORY is shown to the left of the hull star.

Below this is the history of the M5A1 in English and German,

A 5-view shows the box art subject. A yellow circle with a black 15 on it is shown on the left of the nose and a small white star is shown on top of the turret.

Read before assembly instructions and list of suggested colors is shown next to the first 3 assembly steps.

The other side of the instruction sheet continues with a grand total of 9 assembly steps, a black and white photo of the crewman figure kneeling behind the turret and manning the 30 cal. machine gun and a photo of the top of the finished model.

Painting instructions for the lone crewman, how to hot-rivet the vinyl tracks into a continuous loop (treads are not the newer glueable type) and how to stretch sprue over a candle flame to fabricate an antenna are shown.

Tamiya’s address in Japan is repeated and MADE IN JAPAN. 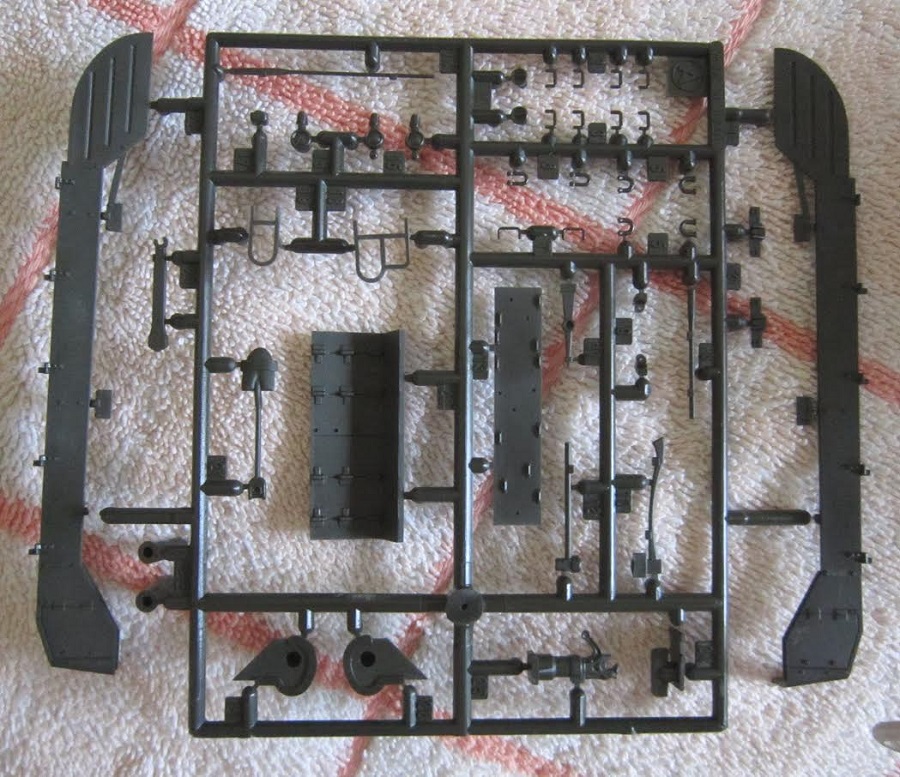 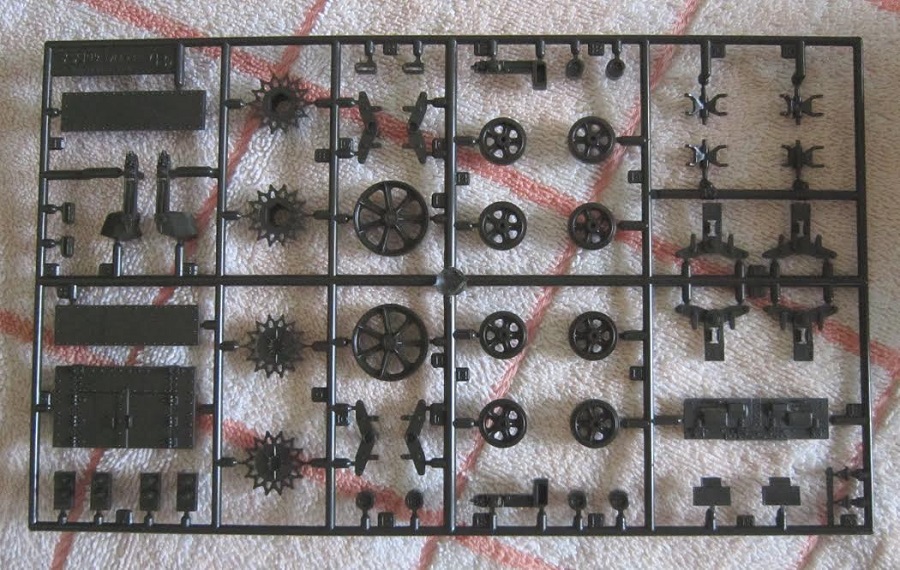 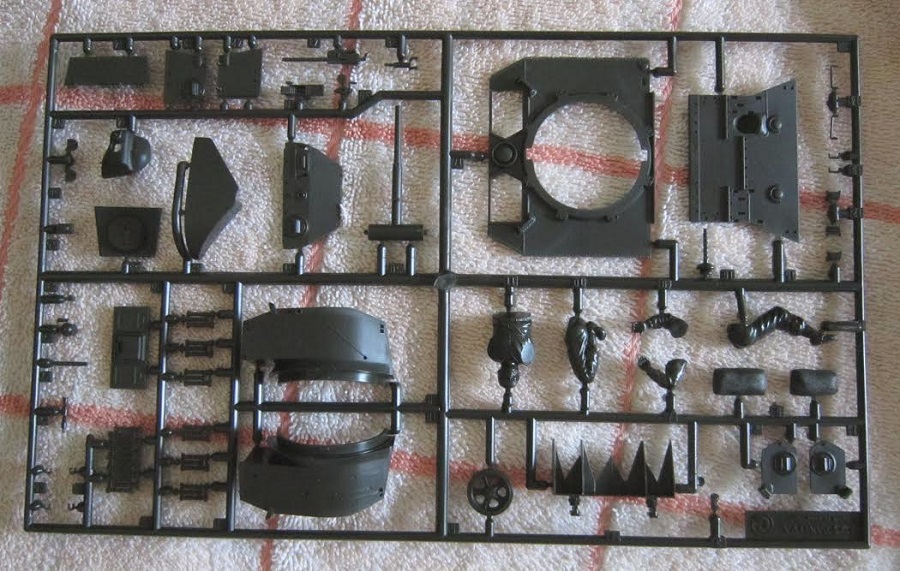 The dark-green hull tub and hull top parts are next.


The hull tub part is common to this kit and Tamiya’s kit of the motorized M5A1. So motorization holes in this tub part will have to be puttied up for a static model.

Molded in cradles for the batteries can be seen inside.

This is no big deal as there are no interior detail parts included for either the hull or the turret. 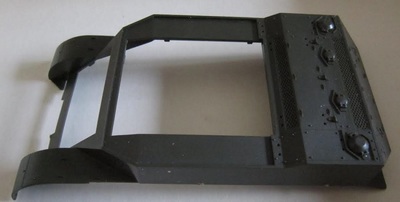 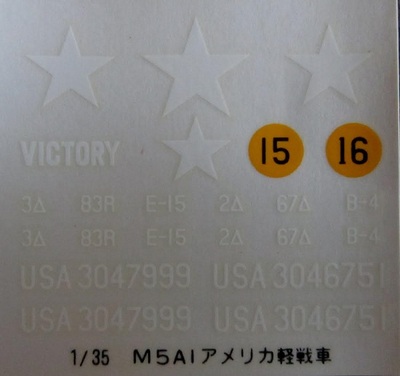 I am a little disappointed that only one marking option is provided on the decal sheet – the box art one.

I bought my kit back in the 70’s at my local hobby shop. I think it may still be around as a re-issue.