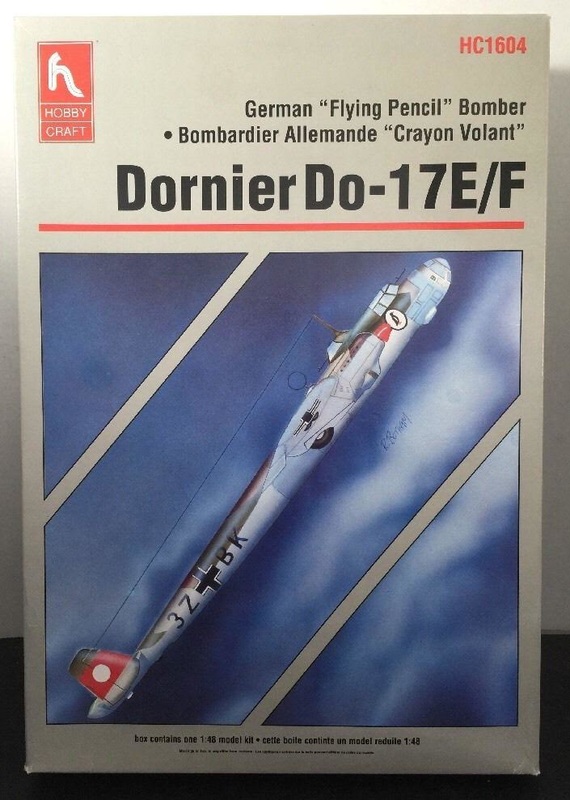 The Dornier Do 17, sometimes referred to as the “Fliegender Bleistift” (“Flying Pencil”), was a light bomber produced by Dornier in Germany. It was designed as a Schnellbomber, a light bomber, which in theory, would be so fast that it could simply outrun defending fighters. It was used in the first 3 years of WWII, with some success by the Luftwaffe. The type was popular among it’s pilots, as a maneuverable low-altitude light bomber, capable of surprise bombing attacks.

It’s sleek and thin airframe made it harder to hit than other German bombers, as it presented less of a target. The Dornier was used in every major campaign in significant numbers until the end of 1941, when it’s limited bomb load and range became too much of a problem, and it’s effectiveness and usage was curtailed.

The Do 17 continued in Luftwaffe service in various roles until the end of the war, as a transport and test and trainer aircraft. A significant number of Do 17’s were sent to other nations. A small production run of an updated version, known as the Do-215, was also produced for export, but ended up in Luftwaffe service as it was sorely needed. The successor of the Do 17 was the Dornier Do-217.

The Do 17E/F prototypes were powered by Daimler-Benz DB600 in-line engines, but these were constantly in short supply. Production started with the BMW-V1 in-line engines, creating the Do 17E-1 bomber and Do 17F-1 reconnaissance version. The bombload of the E-1 was 500 kg., and it was armed with two defensive MG 15 machine guns, one in a position on the cabin roof and one in a small hatch in the floor, with a restricted field of fire.

The Do 17’s baptism of fire came during the Spanish Civil War (1936-1939), where it outpaced most enemy fighters and performed well. The Spanish nicknamed the Dornier the “Bacalaos” (“Codfish”).

During the Polish Campaign, a series of new models was introduced with a new enlarged nose, greatly increasing defensive firepower, finally settling on the Z model, which was available by 1939. During the first phase of WWII, the Do 17, along with the He-111, formed the backbone of the Luftwaffe’s Kampfgruppen, from 1939 to 1940. Four of the Luftwaffe’s bomber groups; KG2, KG3, KG76 and KG77 operated the Dornier.
​THE KIT:

The kit comes in a shrink-wrapped very large tray and lid box. Actually, the box is way more blousy than it needed to be. There is a letter L void around the parts inside that is around 3 inches wide.

The boxart shows a Do 17E/F in a camouflage of camouflage of RLM 61 dunklebrun (dark brown), RLM 62 light green, and RLM 63 hellgrau (light gray) above, high on the spine of the aircraft. The underside is RLM 65 hellblau (light blue). This blue is high on the sides. It has a red horizontal wide stripe on the rudder with a white circle with a black swastika on it. (the boxart did not originally show the swastika. I inked it on the white circle). The fuselage code is 3Z + BK in black letters. There is a squadron insignia on the nose of a white oval, out lined in black that has a black penguin on it. This scheme is not provided on the decal sheet

The side panels, both, give a one sentence history of the aircraft and Hobby Craft’s address and phone number. In small print it says that the markings on the boxart may differ from what’s on the decal sheet. This is true on this kit. On one side panel is the address for the Hobby Craft distributor in the UK.
​WHAT'S IN THE BOX:

Inside the box are two large trees of medium gray parts in a sealed cello bag, a medium sized tree of medium gray parts ,a clear parts tree and a tree with the two halves of the fuselage (in medium gray)in another sealed cello bag . The decal sheet, instructions, a pre-paid post card – to put your comments and suggestions on and mail to Hobby Craft and a slip warning that the kit is not for kids under 3, because of small parts that could be a choking hazard (in multiple languages, including English).

Page 1 begins with a repeat of the boxart in black and white, followed by a 2 sentence history of the Do 17E/F in English, French, Spanish, German and Italian. The bottom of the page has international assembly symbol explanations and Hobby Craft’s address.

Pages 2 through 4 give a total of 6 assembly steps.

Page 5 has a 4-view drawing a scheme for a Do 17E-1 of III/KG 255, 1938. This aircraft is in a splinter of RLM 61 dunklebrun (dark brown), RLM 62 light green, and RLM 63 hellgrau (light gray) above, high on the spine. It carries the fuselage code 54 + E37 on the sides of the fuselage. The cross in the middle is black with a red border and on a red circle. The lettering is all black. This code and the odd national markings is also under the wings.

The rudder has the large red horizontal stripe across it with the white circle in the center with a black swastika on it. The swastika, on the decal sheet is cut in two, diagonally. You have to put the two halves together to form the full swastika. This is to get around the taboo against this symbol in Germany, where the kit is also marketed. There is a squadron symbol on the sides of the nose that is a blue shield with a edelweiss flower on it in white..

Page 6 has a 4-view drawing of a scheme for a Do 17E-1 of the Legion Condor, fighting for Nationalist Spain during the Spanish Civil War in 1938. It carries the same camouflage as the above scheme. The rudders are all white with the very top having a black horizontal stripe and a black X on the white area below. The fuselage code is 27 then a black circle 25, the numbers all in black also. There are black circles on top and under the wings with white X’s on them.

The wing tips are white. .There is a red bomb with a black devil riding it on the left side of the nose. The decal sheet gives you two of this, but the right side nose does not appear to have it there. On the sides of the engine cowlings is a white shield with a red devil’s head on it.
Colors are called out in RLM numbers. If a modeler does not have a conversion chart, to tell him what these numbers equate to in colors, they are screwed. Bad move HobbyCraft! A conversion list is available on line at Wikipedia by the way.

There are no parts tree illustrations in the instructions. However, the trees are alphabetized and parts are numbered on them okay.

Letter A medium gray parts are the two fuselage halves. These are done as a top and bottom piece vs the usual side pieces we see in aircraft kits. Parts are identical to the ones in Hobby Craft’s Do 17M/P kit (to be reviewed elsewhere here in the future).

Next are the upper and lower wings. 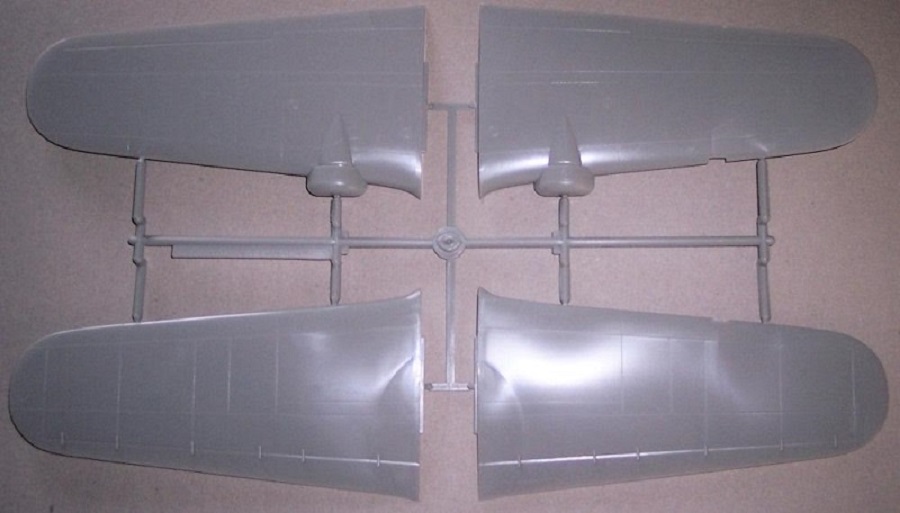 ​Letter B medium gray parts tree is part of the largest one in the kit. It holds: the cockpit floor, foot pedals, control column, seats, instrument panel, DF antenna, radio antenna, tail surfaces, pitot tube, flap hinges (that you have to cut apart), landing gear struts – fenders & wheels, tail wheel and 6 machine guns etc. (58 parts). The parts on this tree, although less of them, are identical to the Do 17M/P kit. 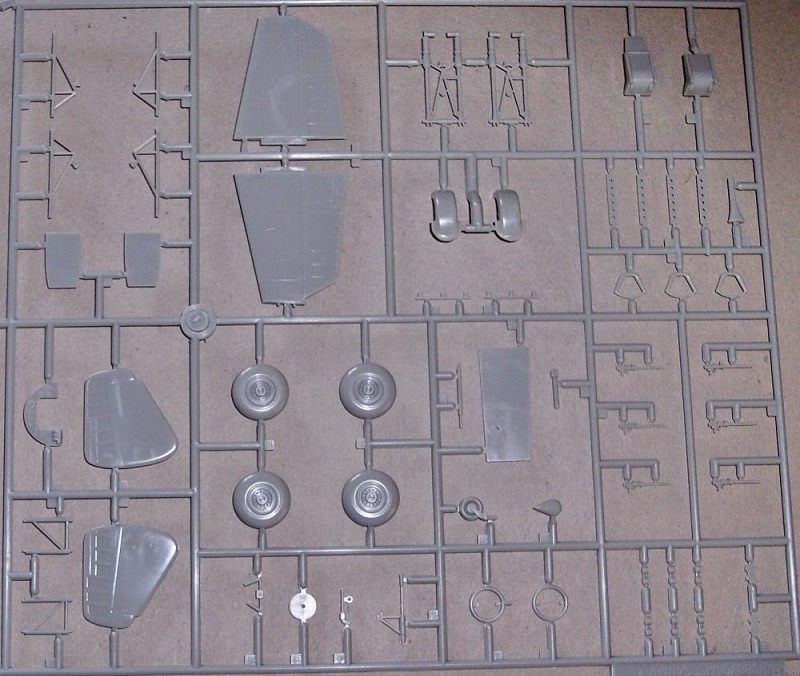 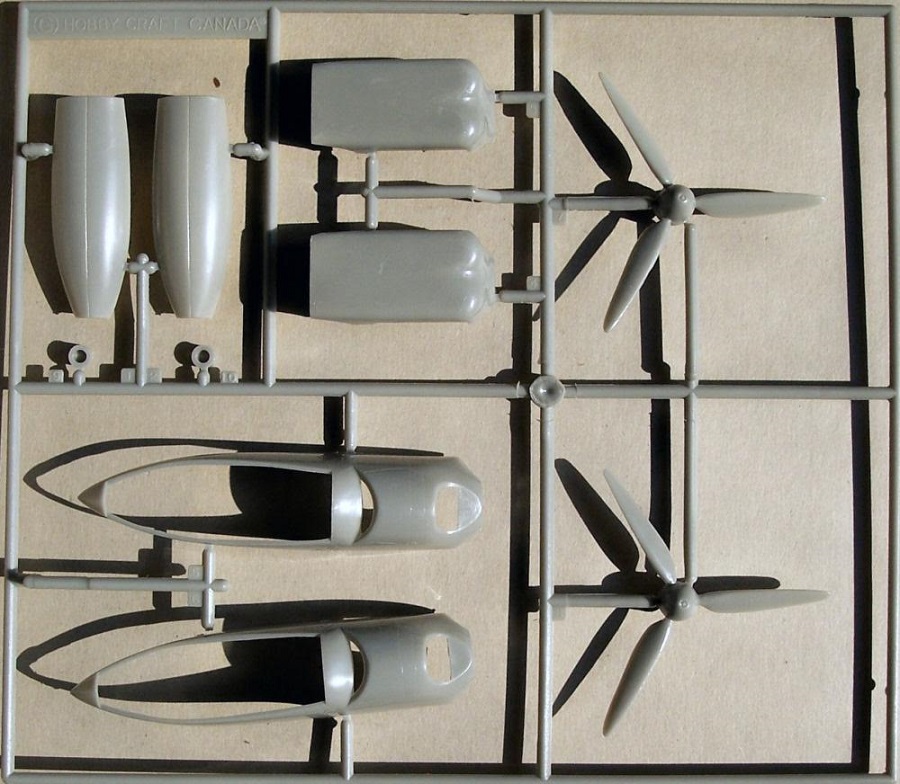 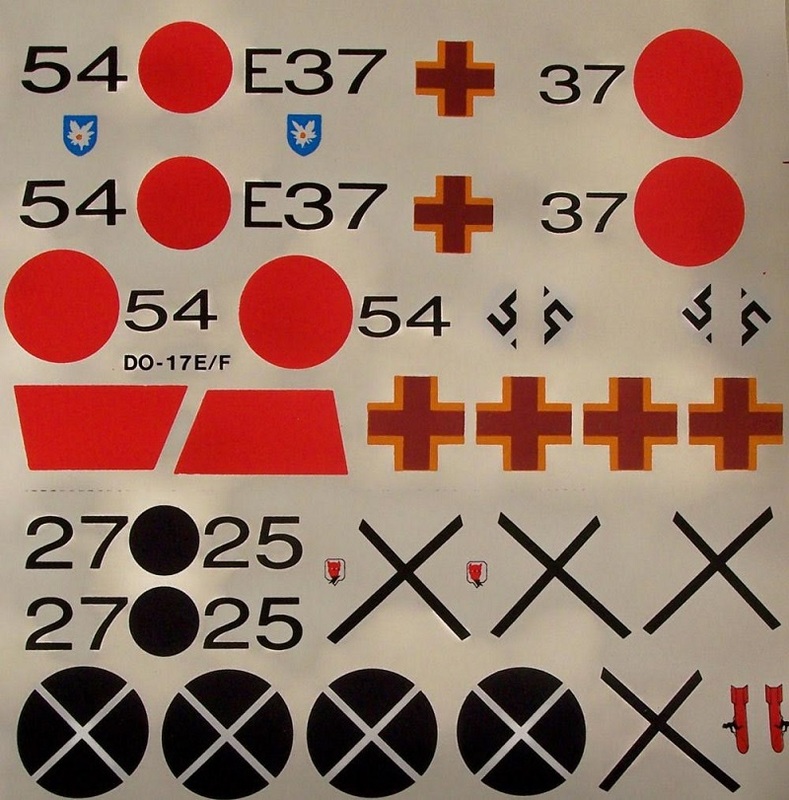 ​Letter H parts tree is the clear parts for the cockpit , cabin windows and wing light lenses. The tree holds 9 parts. There is a single clear part that is an alternate dorsal gun position canopy in the closed version. This is the one you use to build the kit and the open-ended one on the tree is excess and should go in the spares box. 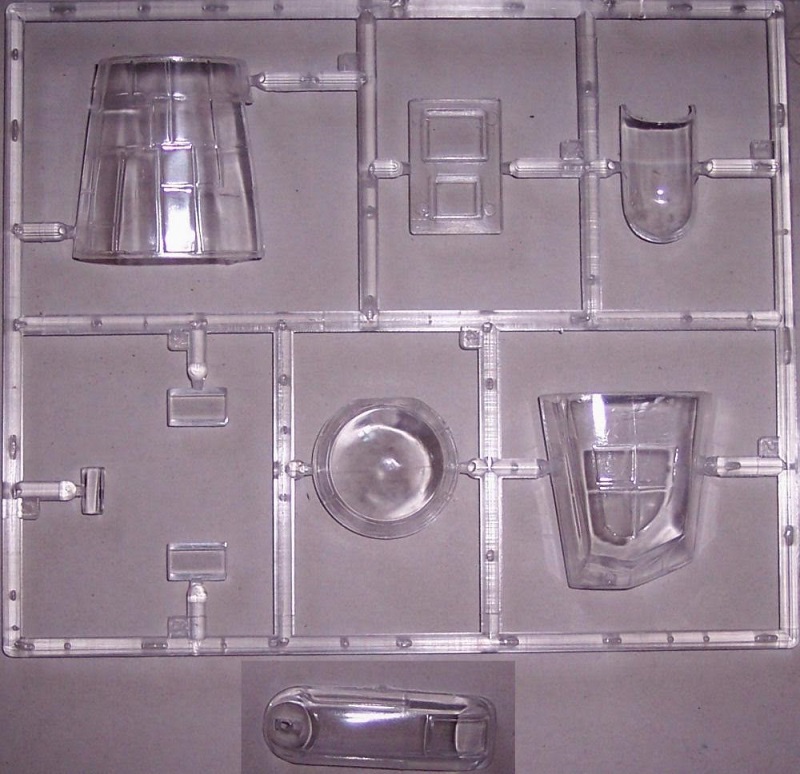 ​There are no crew figures in the kit.

The cockpit is very sparsely provided for. However, I don’t know how much can really be seen in there through the thick transparency parts. Panel lines are the scribed type. Flaps are all molded solid, so would take surgery to alter their positions. The main wheel doors are molded closed and have to be split down the center to get the open doors needed for wheels down.

​I recommend this kit to most aircraft modelers, as it does not appear to be too difficult to build.
Bought my kit at my local hobby shop. It has the copyright date of 2008.