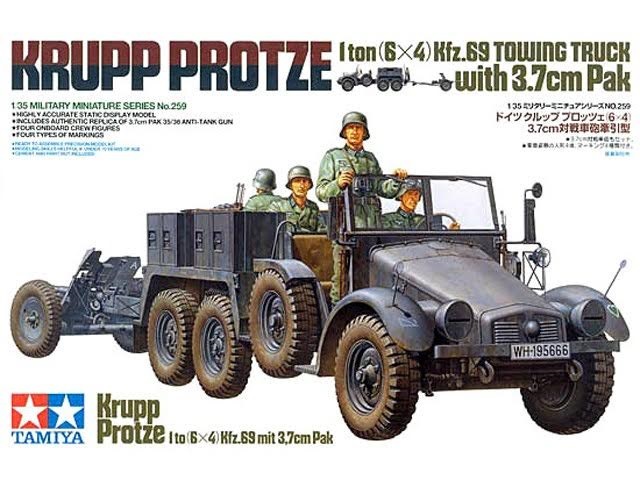 The L 2 H 43 and L 2 H 143 "Krupp-Protze" (unofficial designation) was a six-wheeled 6x4 German truck and artillery tractor produced between 1934 and 1941 and heavily used in World War II. It was powered by a 55 hp or 60 hp (since 1936) Krupp M 304 4-cylinder petrol engine. Its main purpose was to tow artillery, especially the PaK 36, and transport motorized infantry.

This vehicle was extensively used on the Eastern Front, during the North African campaign and in France and Sicily. The "Krupp-Protze" was of relatively advanced design. Its fuel consumption was relatively high (24 Litres / 100 km on road) in comparison to the comparable Opel Blitz 1.5 t truck (16.5 liters / 100 km, produced 1938 - 1942). Total production was about 7,000 units.
The Kfz. 69 was a standard version for towing the Pak35/36 anti-tank gun.

The Pak 36 (Panzerabwehrkanone 36) was a German anti-tank gun that fired a 3.7 cm calibre shell. It was the main anti-tank weapon of Wehrmacht infantry units until mid-1941. It was followed in this role by the 5 cm Pak 38 gun.
​THE KIT:

Tamiya is an older prolific model company based in Shizuoka City, Japan. They manufacture all manner of model subjects in the popular scales.

The box art shows the truck posed against one of Tamiya' signature all white backgrounds that they use for all their box arts.

It is overall Panzer-grey with a white license plate on the front with black lettering WH-195666. There are 4 crewmen in it. Two are seated in the back, one is standing in the front passenger seat and the driver. All wear field-grey uniform with steel helmets.

Features listed on the box art are: Highly accurate static display model. Includes authentic replica of 3.7 cm Pak 35/36 anti-tank gun, four onboard crew figures and 4 types of markings.
One side panel has a color side profile of the truck towing the gun in overall Panzer-grey, followed by a paragraph in Japanese, a copyright date of 2003, MADE IN JAPAN and Tamiya's web address.

The other side panel has a color above-shot of the model and figures made up, that is said to be with the 2nd Company, 44th Tank-destroyer Batallion, 1st Mountain Division, June 1941, Ukraine. However, no markings are visible on it. This is followed by another paragraph in Japanese and Tamiya's street address in Shizuoka City, Japan.

The instructions consist of a single sheet that accordion-folds out into 10 pages in 7 1/2" x 11" page format and a loose sheet the same size that is page 11 and only printed on one side.

Page 1 of the instructions begins with a black and white repeat of the box art, followed by the history of the truck in 8 languages, including English.

Page 2 begins with READ BEFORE ASSEMBLY instructions, followed by CAUTIONS, illustrations of hobby tools and cement, a Tamiya paint color listing in the multiple languages above the 1st assembly step.

Page 3 through the top of page 9 give a grand total of 17 assembly steps.

Step 9 is for the four figures.

The bottom of page 9 show the positioning of the figures and their pioneer equipment on the truck.

Page 10 is the three 2-views for painting and marking the model.

Loose sheet that is page 11 has the fouth 2-view at the top above painting and decal application instructions in the multiple languages, encluding English and an after-market service card.

There are no parts trees illustrations in the instructions. This means extra work to make sure correct parts are found for each assembly step. 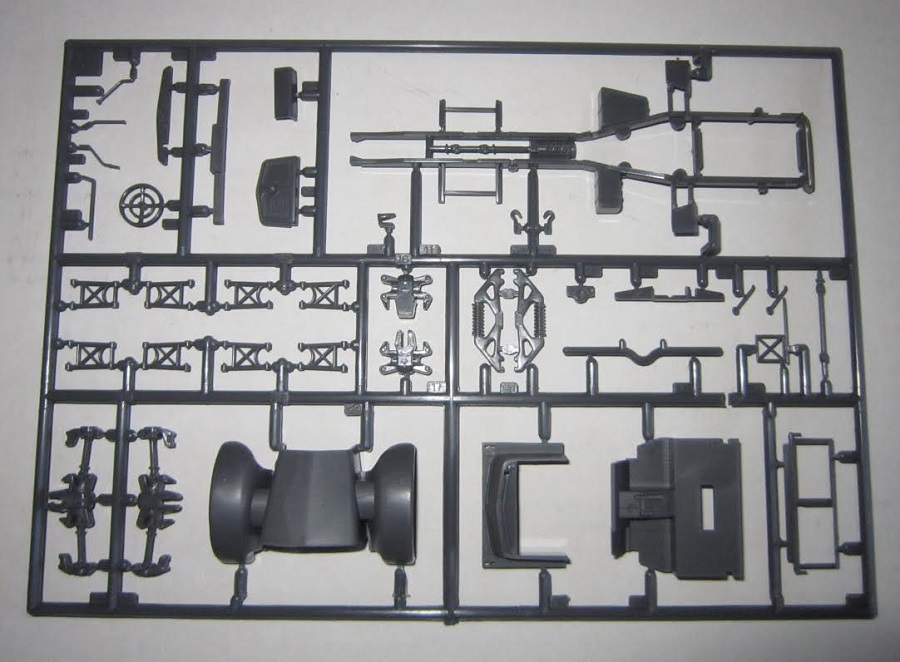 There are no letter C or D trees. 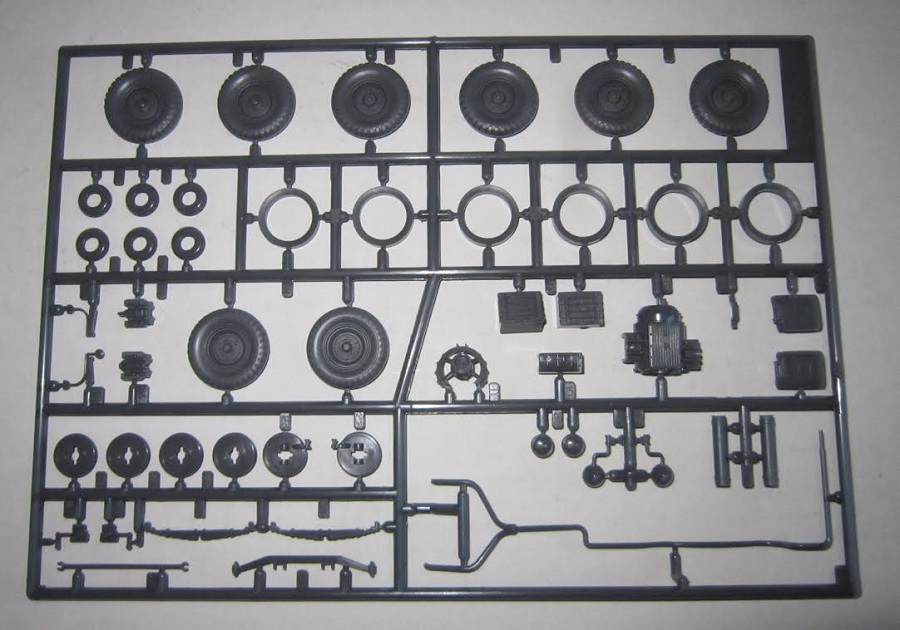 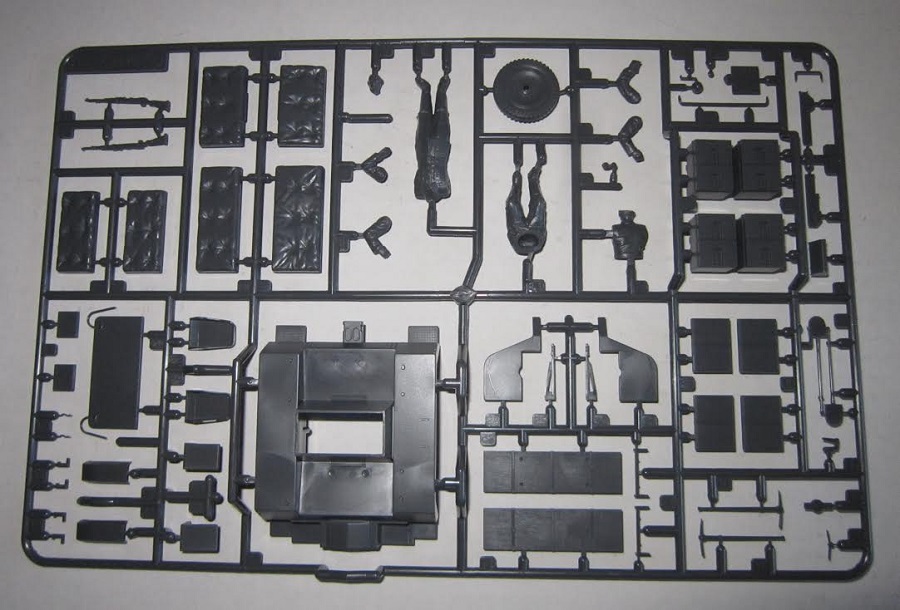 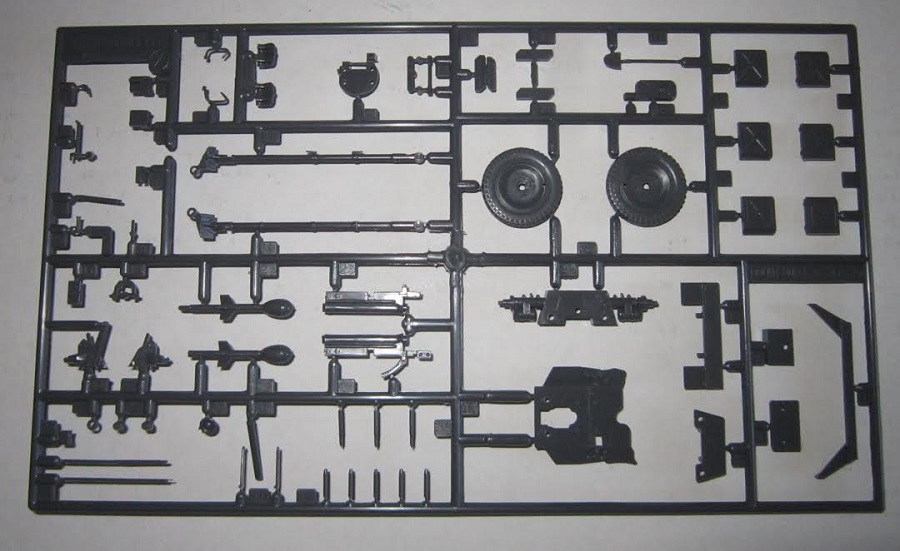 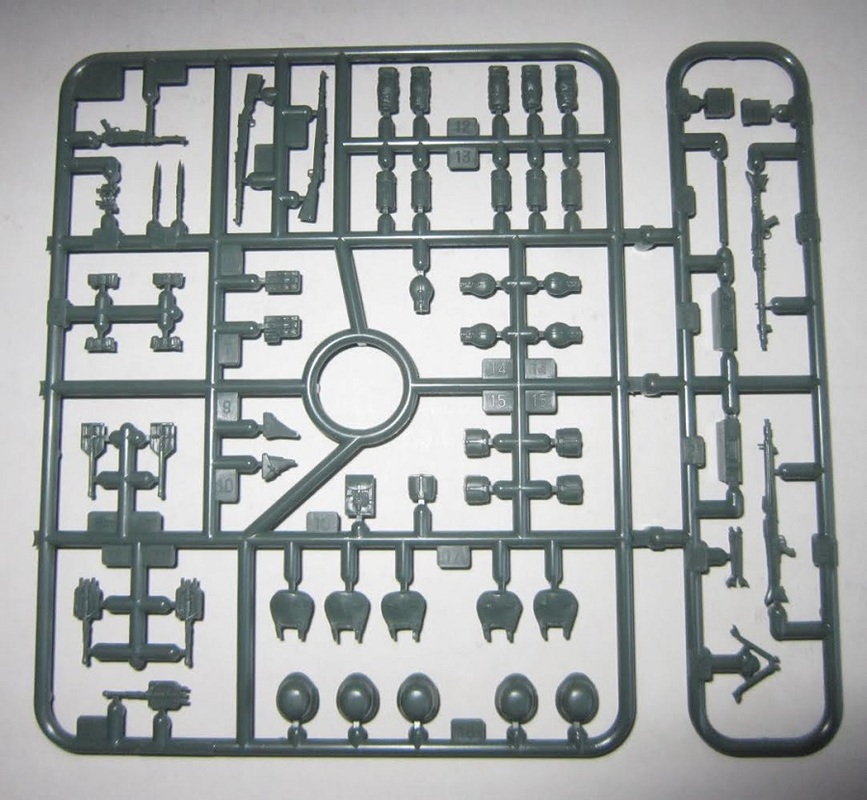 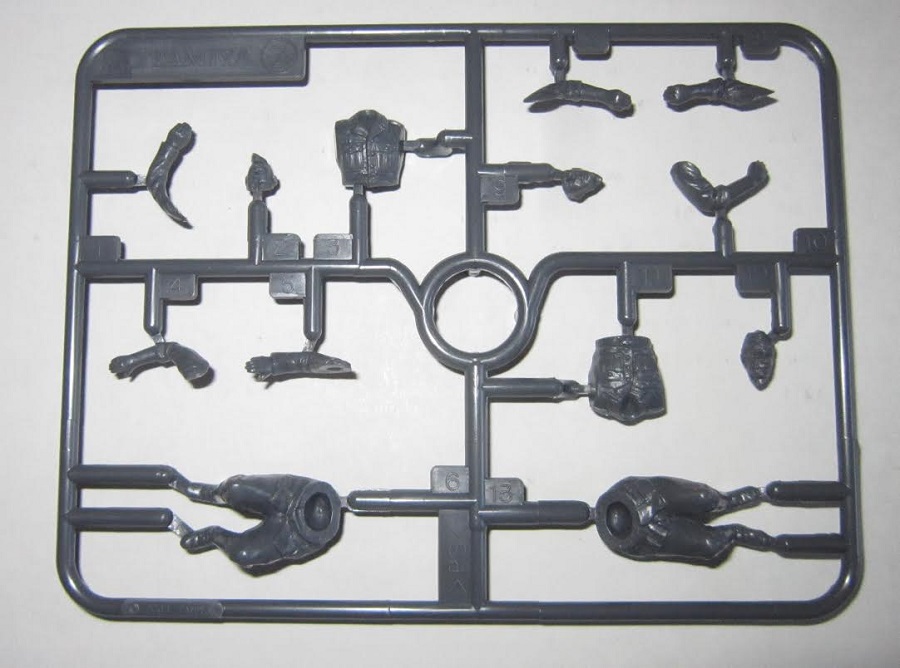 ​Next are the 4 black vinyl poly-caps, the clear plastic windshield glass, the roll of brass wire (that mounts atop the hood for a tow cable) and the decal sheet. 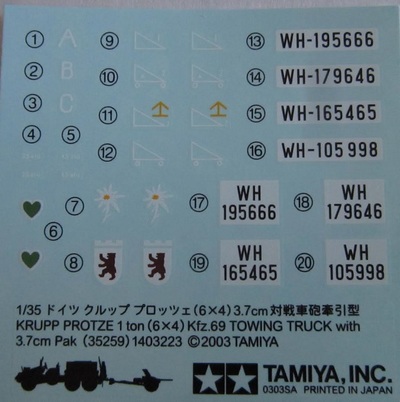 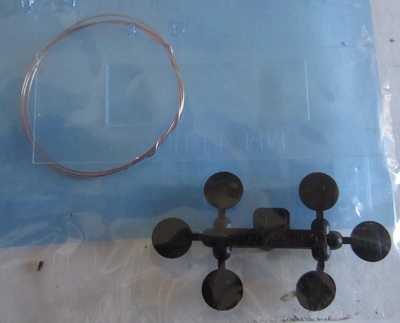