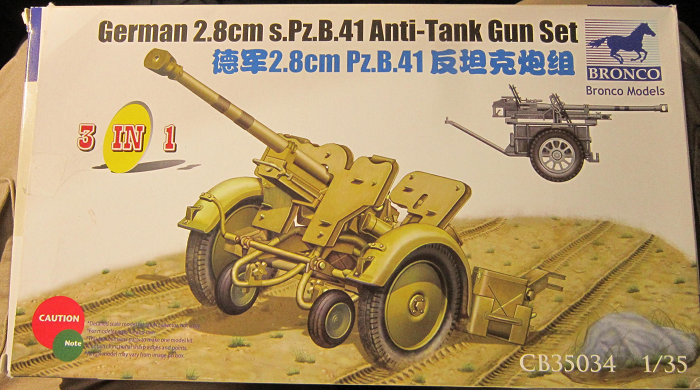 The 2.8cm Schwere Panzerbuchse 41 was designed as a result of squeeze-bore experimentation in Germany, dating back to 1903. In 1939 the Mauser-Werk AG designed the Gerate 231 anti-tank rifle base on the Gerlich principal.
The weapon had a tapering bore which reduced the soft metal jacket of the projectile from 28mm to 20mm. The tapering barrel construction resulted in a very high muzzle velocity of 1,400 m/s, which greatly increased armor penetration.

It was best described as a small light-weight anti-tank gun as it was mounted on a wheeled carriage. It was expensive to produce because of the high quality metals needed for the barrel.

Production continued until 1943 with a total of 2,797 weapons being completed. It was used by the army and paratroops until the end of the war. Some also being supplied to Germany's allies.

However, its effectiveness against tanks declined and it was considered obsolescent by 1942. The weapon was also seen mounted on Sd.Kfz. 250 half-tracks and Sd.Kfz. 221 armored cars.
​THE KIT:

The kit comes in a shrink-wrapped end opening type box. I am no fan of this type of box, because invariably parts of the decal sheet find their way past one of the end flaps to become lost forever. Give me a tray and lid type box any day of the week.

The box art shows the gun sitting in sand with deep tire marks in it, against an all white background. Similar to how Tamiya also does most of their box arts.

One side panel says the kit is not suitable for children under 3 due to small parts.

Bronco's  street addresses in Ningbo and Hong Kong, China are provided, with their e-mail and web addresses.

The other side panel has a color illustration of a brass PE fret that is in the kit and says the kit is suitable for modelers 14 to adult, in 10 languages, including English.

The bottom of the box has 4 illustrations against black backgrounds of the gun on it's 3 different carriages.

The kit contains 11 light-tan trees, 5 brass PE frets in a zip-locked cello bag and the instructions.

The instructions consist of a staple-bound booklet of 12 pages in 8 1/4" x 11 1/2" page format, printed in color on slick coated paper.

Page 1 begins with a color repeat of the box art, over the history of the gun in English, German and Chinese.

Bottom of the page has READ BEFORE ASSEMBLING instructions in the 3 languages.

Page 3 has the parts trees illustrations. There are parts shaded out in the illustration of tree letter C as being excess and not needed to complete the model. Only 2 identical brass PE frets are mentioned, but there are physically 5 of them in the kit. Factory packaging mistake?

Page 4 through 10 give a grand total of 9 assembly steps.

Page 11 is the decal and coloring instructions. Two 3-views are shown.

1. The gun on the tall version carriage with small wheels. It is overall panzer gray.

2. The gun on the low version carriage with large  and small wheels. It is overall dark-yellow.

No markings are shown at all and no decal sheet is in the kit.

Page 12 has another 3-view of the gun on what was the initial carriage version used. It is the one with the storage bin below the gun and has spoke wheels. It is overall panzer-gray.

There are 2 identical light-tan letter A parts trees. They hold parts of the high-centered version carriage (25 parts each) These trees are co-joined to the 2 Ba trees.

​There are 2 identical light-tan letter Ba parts trees. They hold gun and shield parts (16 parts each) They are co-joined to the 2 letter A trees. 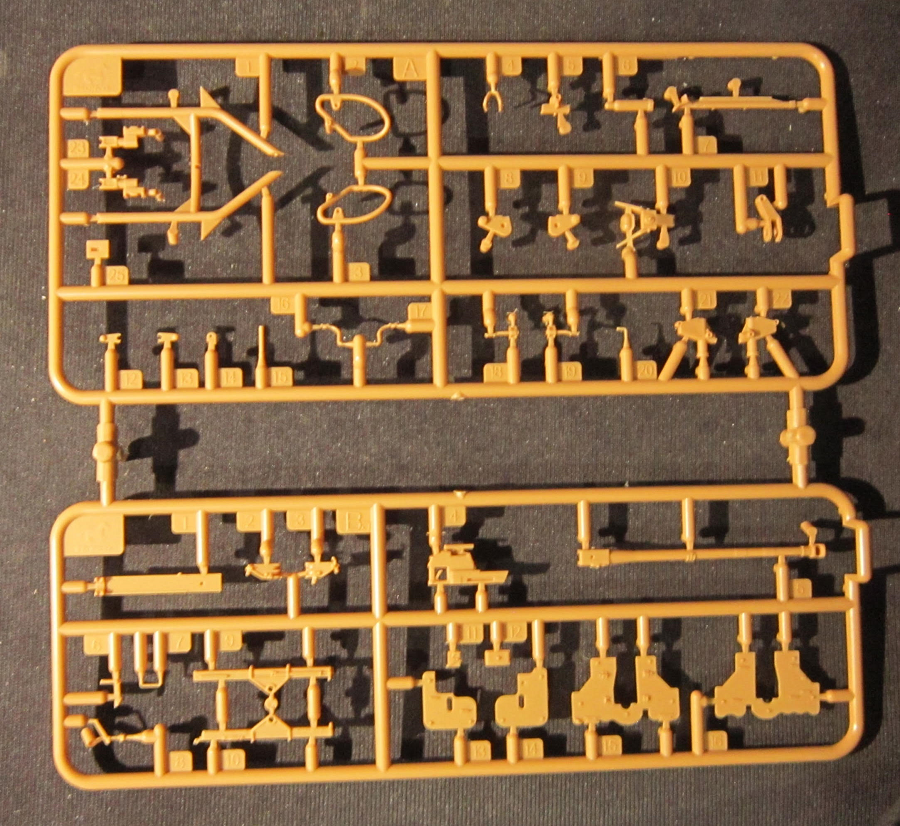 Light-tan letter C tree holds the spoke wheels and parts for the carriage version with the storage bin. (30 parts) 13 parts are shaded out in the instructions as being excess. 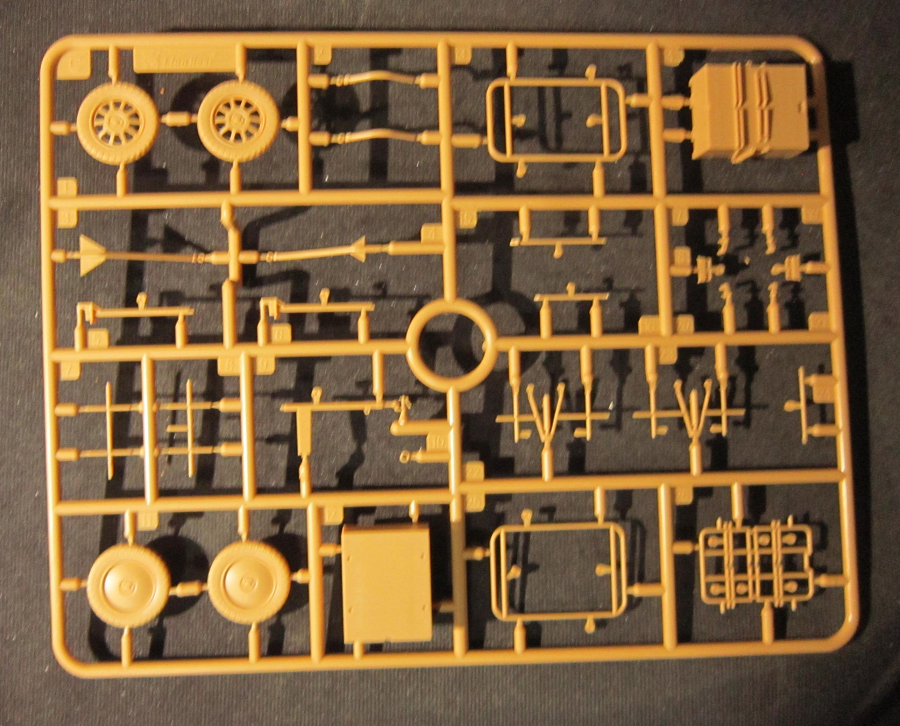 ​There are 2 identical light-tan letter Ca trees. They hold ammo rounds etc. (17 parts each) They are co-joined to two of the four D trees.
​There are 4 identical light-tan letter D trees. They hold wheels and fenders for the low-centered version carriage (12 parts per tree) Two of these 4 trees are co-joined to the 2 Ca trees. 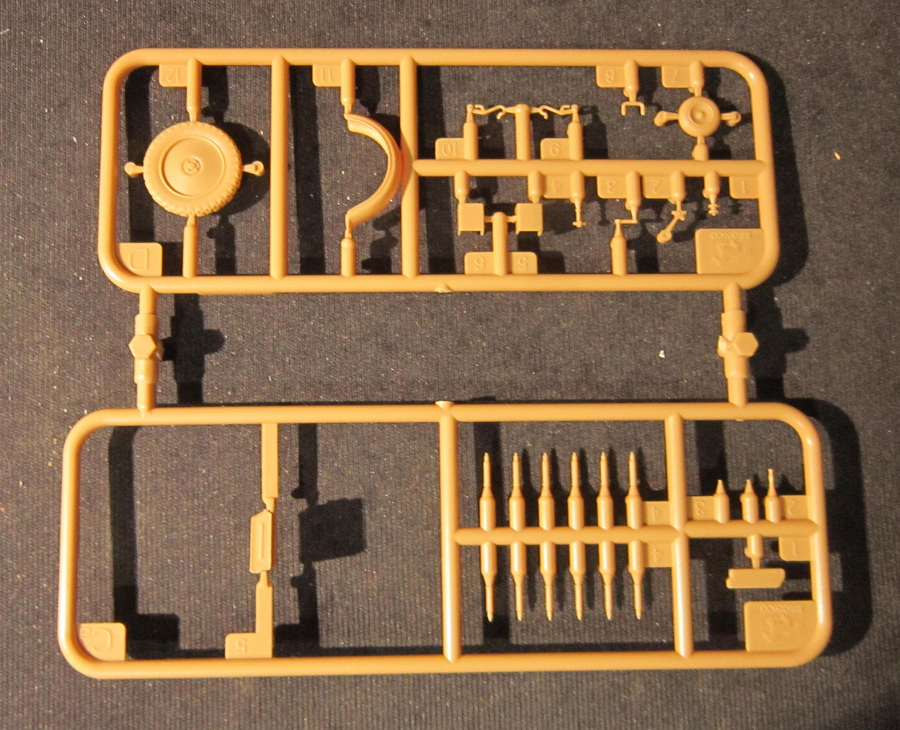 ​As said earlier, there are supposed to only be 2 brass PE frets in the kit. Instead there are 5. The sheet contains the dividers to hold the main gun ammunition in place in an open case, lifting tabs handles, etc. 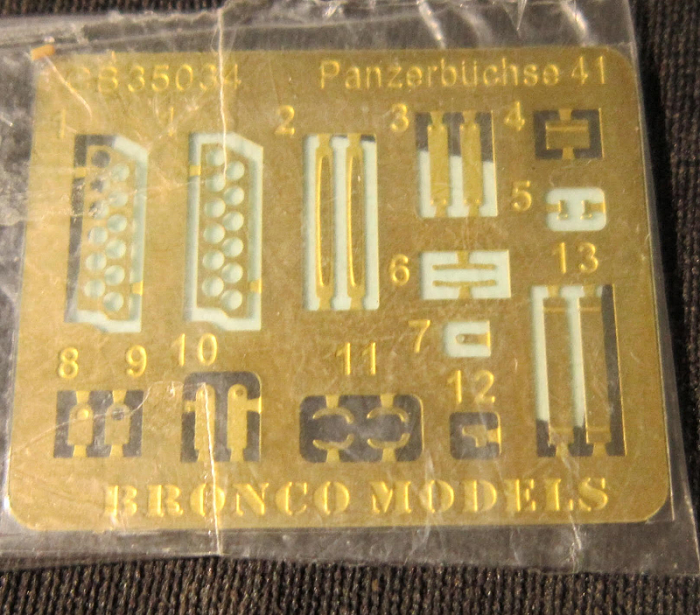 There are no crew figures or decals included in the kit.

It has great detail.