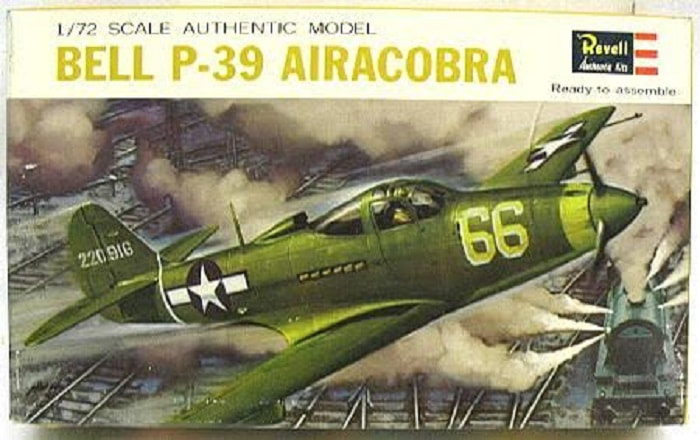 OUT OF PRODUCTION
​
HISTORY:

The Bell P-39 Airacobra was one of the principal American fighter aircraft in service when the United States entered World War II. The P-39 was used by the Soviet Air Force, which scored the highest number of individual kills attributed to any U.S. fighter type in the Eastern European theatre.

Other major users of the type included the Free French, the Royal Air Force, the United States Army Air Force, and the Italian Co-Belligerent Air force.

Designed by Bell Aircraft, it had an innovative layout, with the engine installed in the center fuselage, behind the pilot, and driving a tractor propeller via a long shaft. It was also the first fighter fitted with a tricycle under carraige.

Although its mid-engine placement was innovative, the P-39 design was handicapped by the absence of an efficient turbo-supercharger, preventing it from performing high-altitude work. As such it was rejected by the RAF for use over western Europe and passed over to the USSR where most air combat took place at medium and lower altitudes.

Together with the derivative P-63 Kingcobra, the P-39 was one of the most successful fixed-wing aircraft manufactured by Bell.
​THE KIT:

Revell is an old prolific model company with offices in the U.S. and Germany. They manufacture all manner of model subjects in the popular scales.

This kit came in a not shrink-wrapped end opening type box, held shut with tape.

I am no fan of this type of box, because invariably parts find their way past the end flaps to become lost forever. Bive me a tray and lid type box any day of the week.

The box art shows a P-39 strafing a train. It is overall OD over a grey under carraige. It has a yellow nose and a large white 66 in front of the cockpit on the sides. Stars with bars U.S. insignia are on the fuselage sides and above the left wing and below the right. A white no. 220916 is stenciled on the rudder and a thin white fuselage band is behind the fuselage star.

On side panel says Revell has over 75 model plane kits to choose from (no mention of their scale). This is followed by color box arts of 3 kits they manufacture: a Brewster Buffalo, a Nakajima Hayate and a Polikarpov I-16.

This kit holds 4 olive drab (OD) trees of parts, a clear tree, the deal sheet and the instructions.
Parts are not cello bagged.

The instructions consist of a single sheet that is printed on both sides in 5 1/2" x 8" page format, folded twice to fit the box.

The face side of the instructions has mention that Revell is in Venice, CA, followed by a black and white repeat of the box art, the history of the P-39 and a 3-view of the box art scheme.

The other side of the sheet has 3 assembly steps with lots of text to walk modelers through the builds.

There are no parts trees illustrations on the instruction sheet. However, there are number tabs next to the parts on the trees.

Part trees are not alphabetized.

The first olive drab tree holds: one elevator, one wheel, landing gear doors, tail wheel and one half of the fuselage (9 parts) 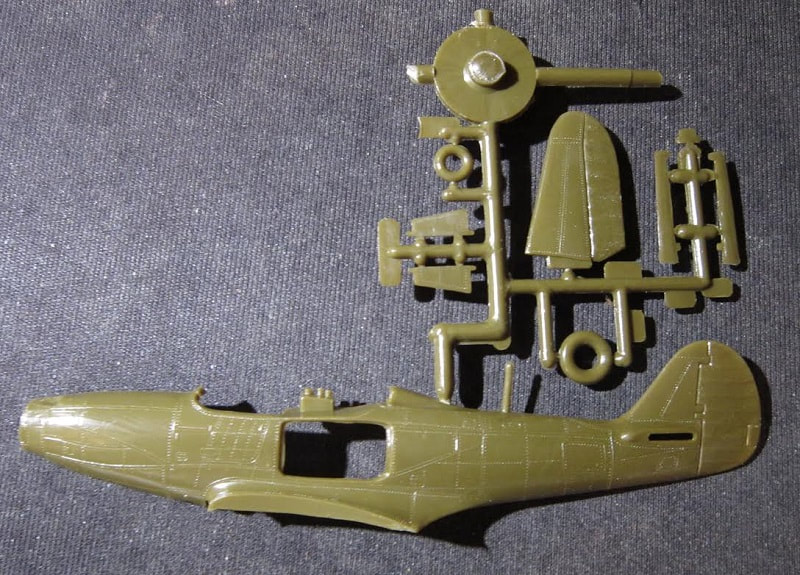 ​The second olive drab tree holds: the other fuselage half, another main wheel, the spinner, under-wing machine gun pods, engine top and the other elevator (6 parts) 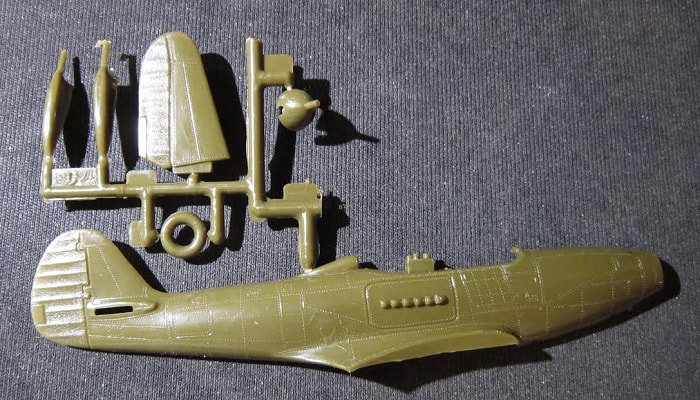 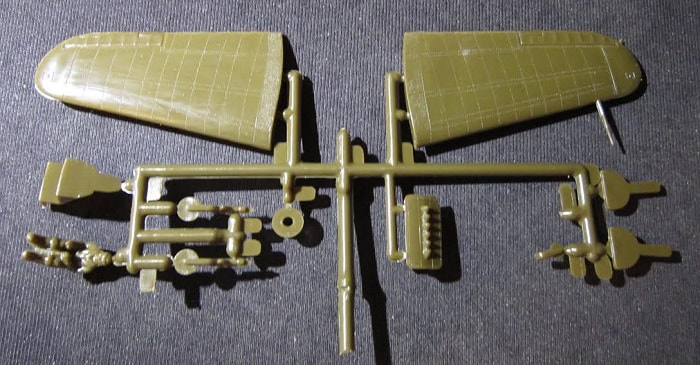 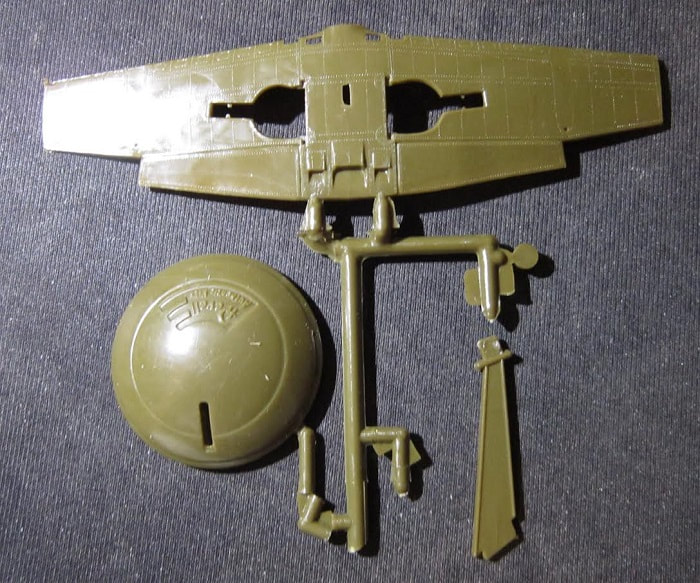 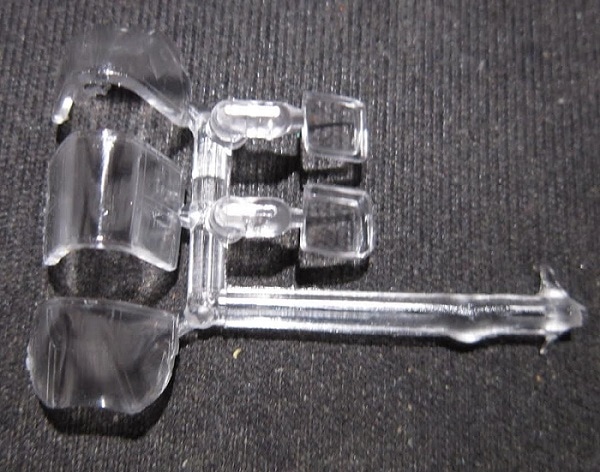 The engine and nose gear leg were loose in the box.

The kit decals for the box top version. 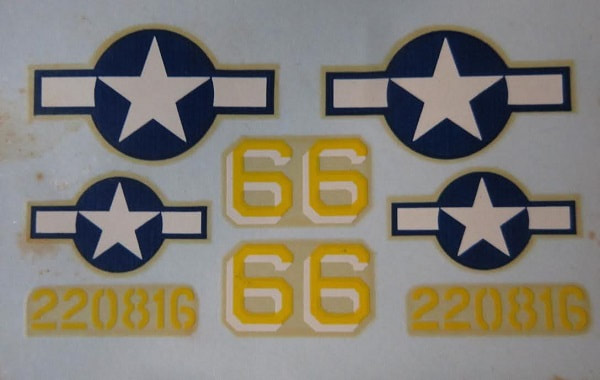 Flaps are molded solid and panel lines are of the raised variety.

This is a fairly nice older kit. Recommended

​I bought my kit years ago at my local hobby shop and am willing to sell it for a decent offer.