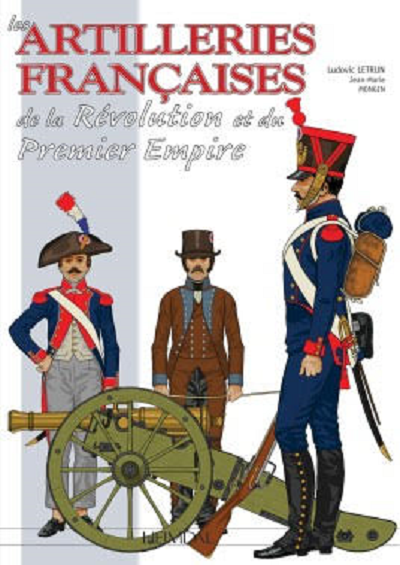 MSRP: $40.00
When you tackle the French artillery of the First Empire, you must always take into account descriptions of the artillery of the Ancien Regime and the Revolution in detail, which is what this book does.

The term "artillery" in the Middle Ages designated "all the machines the army uses". So, originally, the artillery corps comprised officers whod created, used and maintained these machines.

It took several centuries and a lot of ups and downs before the artillery was effectively organized: this was Jean-Baptiste Vaquette de Gribeauval's vocation. Mr. de Gribeauval, the Inspector of Artillery, set up this organization gradually over more than thirty years, and it remained in force, to a greater or lesser extent, until 1825 and this is the subject of this book.

All the artillery pieces, the material used by the Foot and Horse Artillery at the end of the Ancien Regime, during the Revolution, and the First Empire, as well as the Pontoneers, the permanent artillery (l'artilleriesedentaire) of the Coastguard Artillery,

These all too often forgotten heroes of the Napoleonic era, are presented in the hundreds of profiles and silhouettes shown in this book.

Two chapters are given over to the artillery trains and teams which, during the First Empire, reach the age of maturity, the age of regulations.

The cover art shows 3 French artillerymen standing by a cannon.

The book contains 467 color illustrations. 61 or which repeat the same soldier over and over.

There are illustrations of weapons, carriages and boats used.

Unfortunately, the text is all in French and I cannot read it..sigh.

They are the North american distributor of Heimdal books and all their titles can be viewed on Casemate's web site at:
​www.casematepublishers.com