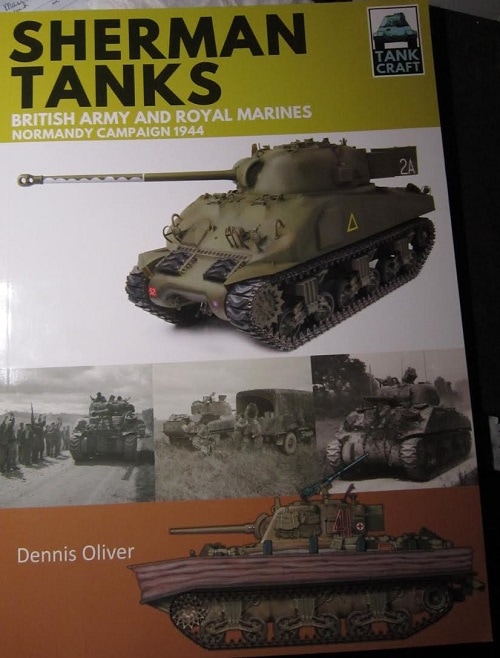 MSRP:$ 24.95
​With production in excess of 55,000, the Sherman tank was eventually in service with most Allied armies of the Second World War and by the time of the Normandy landings was the mainstay of Britain's armored battalions.

In his second book in the TankCraft series, Dennis Oliver uses wartime photos and extensively researched, exquisitely presented color illustrations to cover the Sherman tanks used by the units of the Royal Armoured Corps and the Royal Marines during the fighting in northern France.
As with the books in the TankCraft series, a large part of this work showcases available model kits and after-market products, complemented by a gallery of beautifully constructed and painted models in various scales.

Technical details as well as modifications introduced during production and in the field are also explained as is the complex system of markings employed by British armored regiments.
This book will give the modeler all the information and knowledge required to create an authenticf miniature representation of the tanks that fought from the beaches of Normandy, through the battle for Caen and on to the killing fileds of Falaise.

Dennis Oliver is the author of over 20 books on WWII armoured vehicles, including: Codename Swallow, British Sherman Tanks at Alamein, To the Last Bullet, Germany's War on 3 Fronts, Westwall, German Armour in the West 1945, Viking Summer and A Sound Like Thunder.

Pen & Sword Ltd. is based in the U.K. This book was bound and printed at Malta.

The front cover shows a DML Dragon 1/16th scale Sherman IC Firefly.
In the center, left to right, is a Sherman Vc Firefly of the 2nd Battalion Irish Guards near Beauvais in August 1944.

A Sherman V from an unidentified unit photographed near Vire.

At the bottom is a Sherman V Duplex Drive tank of 13th/18th Hussars photographed near Ranville on 10 June 1944.

The back cover shows from top to bottom:

The crew of a Sherman VC Firefly waiting outside Argentan for the order to advance in August 1944.

A Sherman Vc Firefly from either 1st or 5th Royal Tank Regiment of 22nd Armoured Brigade near Aunay-sur-Odon, the scene of much heavy fighting.

A Sherman Vc Firefly of 3rd County of London Yeomanry photographed in June 1944.

The book contains 40 black and white wartime photos, a data listing and many color illustrations.

In the section showing built up models there are:

On the last pages are cover arts of other Pen & Sword books:

This is one neat book full of markings for British Shermans. It will greatly appeal to both modelers and AFV enthusiasts and historians.

I want to thank the folks at Casemate that sent me this book sample.

A full listing of Pen & Sword titles can be seen at the Casemate site at:
www.casematepublishing.com