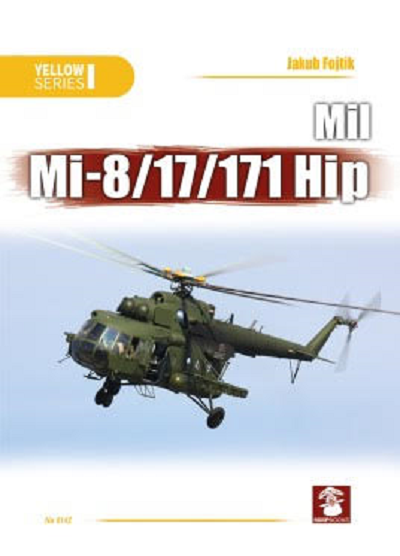 Mushroom Model Publications is based in the UK. All their books are printed in Sandomierz, Poland in the English language by their associate Stratus. Stratus also does their own line of books in both Polish and English.

All variants and upgrades are lavishly illustrated by 433 color photos and 30 black and white ones.

This publication covers the legendary Soviet multipurpose type, the Mi-8 Hip helicopter. As a very first book, it describes not only the history and status of the original Mi-8 variants powered by TV2-117 engines starting with the V-8 prototype and the Mi-8MT (for export known a Mi-17) models powered by TV3-117 engines , but also the Mi-8AMT (Mi-171) family up to the latest Mi-8AMT Sh-VN special operations variant.

Each version is introduced by its development and production history and by the service and export. A separate chapter is dedicated to the detailed description of all Mi-8/17/171 family upgrade done by Belarusian, Bulgarian, Chinese, Czech, Finnish, French, Israeli, Lithuanian, Polish, Serbian, Slovak, South African, Turkish, UAF, UK, Ukrainian, US, Yugoslavian and of course Russian companies.

All known special variants and demonstrators are described in detail as well,

The publication includes lists of export production and also lists of re-exports giving the reader a full idea of the world footprint of the Hip. A detailed technical description is attached highlighting variants’ deviations,

There are 1/72nd scale line drawings of side profiles and illustrations of internal fuselage bulkheads of a Mi-8T.

There are 10 data lists included.

Many walk-around type photo show the inside and outside of these helicopter variants.

A bibliography and abbreviation explanations are at the end of the book.

This is one neat book. It will be of great interest to modelers and aircraft historians alike. Highly recommended.

I sincerely want to thank Casemate Publishers, who sent me this review sample and Roger Wallsgrove, the head editor of MMP and the folks at Stratus.

Casemate is the North American distributor of MMP books and all MMP titles can be found on the Casemate site for sale at:
​www.casematepublishers.com