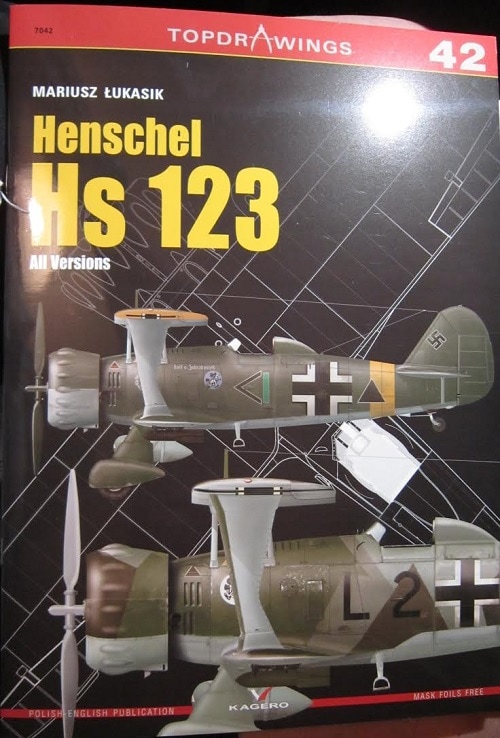 The Henschel Hs 123 was a single-seat biplane dive bomber and close-support attack aircraft flown by the German Luftwaffe during the Spanish Civil War and the early to midpoint of World War II. It proved to be robust, durable and effective especially in severe conditions. It continued to see front-line service until 1944, only to be withdrawn due to a lack of serviceable airframes and spare parts (production ended in 1940).

Kagero is a publishing company based in Lublin, Poland.

The cover shows a Hs-123A-1, coded L2 + AC, letters are black except for the A which is red with a white outline. This aircraft was flown by Hptm. Otto Welb, gruppenkommnder of II (Schl..)/LG 2, Cambrai airfield, France, May 1940. Camouflage of the machine consisted of RLM 70 Scwarzgrun (black green) and RLM 71 Dunkelgrun (dark green) on the upper and sides and RLM Hellblau (light blue) on the underside. The aircraft carried the unit's emblem on the forward fuselage spine aft of the turtle deck and a chevron marking on the center of the upper wing.

The other color illustration is of a Hs-123B-1 coded <I + black triangle. The chevron and triangle are outlined in white. It was flown by Lt. Josef Menapace, Staffelkapitan of 7 /Sch.G. 1 and Gruppenadutant of II/Sch.G. 1 Eastern Front, August 1942.

The upper and side surfaces of the aircraft were coated with RLM Dunkelgun (dark green), the underside was RLM 65 Hellblau (light blue). It had a yellow fuselage band and yellow underside of the uppier wing ends. The Infanterie-Stumbzeichen (Infantry Assault Badge) and Mickey Mouse emblem of II/Sch.G. 1 were applied to both sides of the fuselage. The inscription "Rolf v Zahradnicek" was painted in white above the unit badge on the port side only. Rudolf Von Zahradnicek was Menapace's comrade, who was killed in action on 4 February 1942. Josef Menapace flew 723 combat missions before he was shot down and killed on 6 October 1943.

The back cover has 2 more color profiles of the Hs-123 on it:

1. A 123A-1 coded < L + - of 4/SG 2, Chersones-Sud airfield, Sevastopol, Crimea, spring 1944. The upper surfaces of this plane were finished in RLM 71 Dunkelgun (dark green) while the underside was painted RLM 65 Hellblau (light blue). The lower part of the engine cowling and the undersided of the upper wing tips are yellow. The letter L and the horzonatal bar in the fuselage code are yellow. The aircraft has a yellow fuselage band also. The horizontal bar shows the aircraft's affiliation with II Group.

2. A 123A-1, coded black 33 (roundel) black 55. It has a black BV. 1-3 on the rudder. The rudder flap is white with a black large X on it. The aircraft is over all silver with a blue lightning flash down the whole length of the fuselage sides. 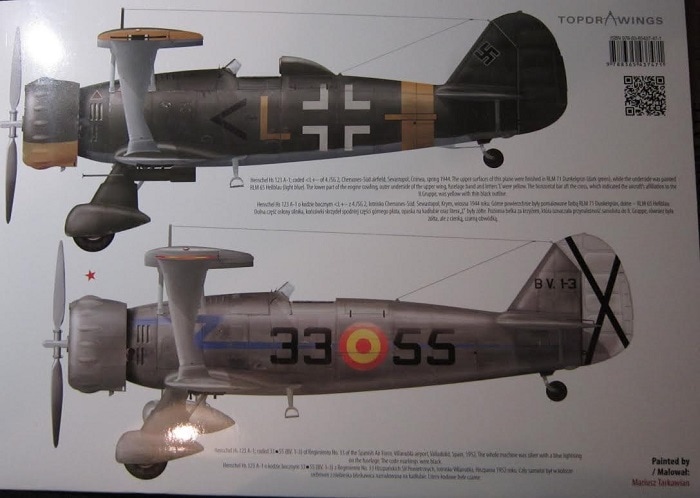 For color profiles there are 10 of them (including 2 on the back cover).

There is a sheet inserted into the book that is 16" x 23" folded twice to fit the book.

There is a small black square inserted in the book and I haven't a clue as to what it's purpose is ?? It appears to have roundels embossed into it. 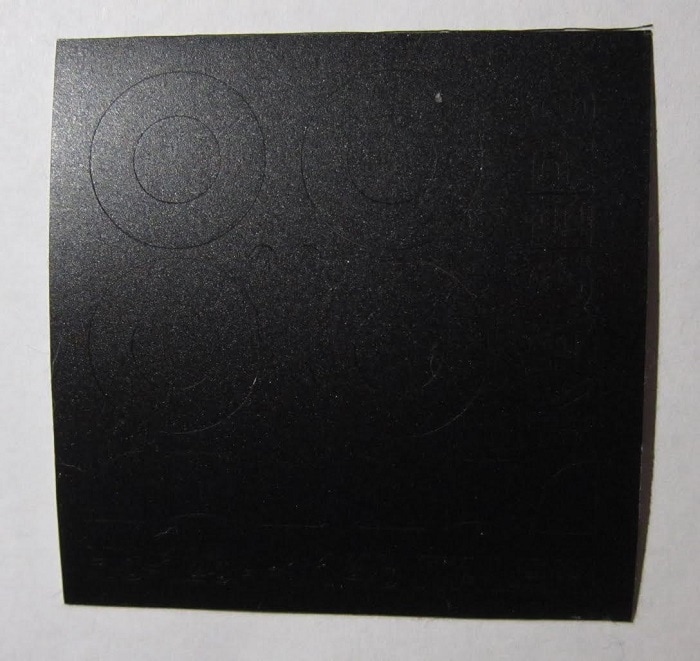 The book came in a re-sealable clear envelope.

This is a very detailed book on this aircraft. I highly recommend it, although I think its a little overspriced for just 20 pages and the line drawing.

This is probably the only biplane that I like as a model kit, because it has no wiring in the wings to be done. Something that steers me away from building biplanes.

I want to thank the folks at Casemate who sent me this sample in a heavily padded envelope and the folks at Kagero.

All Kagero titles can be seen at: