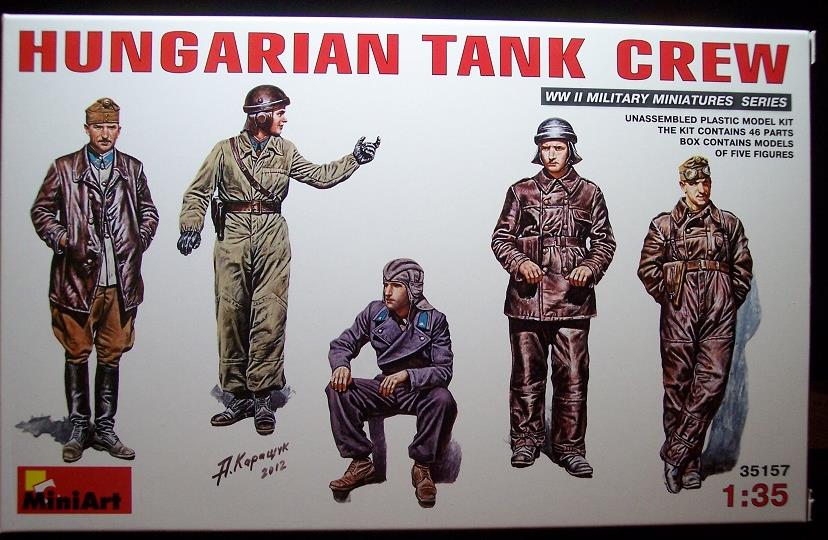 MSRP: $20.00
MiniArt is a model company based in the Ukraine.

The kit comes in a shrink-wrapped end-opening type box. I am no fan of this type of box. Parts seem to find their way past the end flaps and become lost. Give me a tray and lid type box any day.

The box art shows 5 figures posed against an all white background. This is very similar to the way that Tamiya does their box arts with all white backgrounds too.
The 5 figures are dressed in 5 styles of uniforms. There is a standing officer in a cloth side cap, ¾ length brown leather coat that is open at the front, jodhpur type pants and jack boots. He has his hands in his pockets.

The second figure is in red brown coveralls that are bloused into his shoes. He has a Jim Brown belt and shoulder strap and a pistol holster. He wears a leather helmet with ear/neck flap (very similar to what Italian tank crewmen wear). He is standing with his left arm raised.

The fourth figure wears brown leather overalls, a belt with a pistol holster, a soft cloth side cap with goggles on it. He stands in a leaning backwards pose with his hands behind him and his legs crossed at the ankles.

The fifth and final figure is seated,. He wears a khaki double breasted cloth jacket and pants that are bloused into his shoes and a cloth tanker’s helmet with ear phones. He is seated on what appears to be a bench or a chair. You can only see one leg of this and there is neither a bench or chair included in the kit.

One side panel of the box has the color box arts of 2 other figure kits that MiniArt makes. One is of French civilians (kit no. 35144) and the other is an Italian tank crew (kit no, 35093).

Next to these is a warning that the kit is not for children below the age of 3, because of small parts that they may ingest. This is in multiple languages including English.
MiniArt’s street address in the Ukraine is provided, along with their e-mail and web site addresses.

The other side panel tells the features of the kit in Russian, Ukrainian and English. There is a sticker attached that says that Model Rectifier Corp. is the U.S. distributor. The kit is made in the Ukraine and is designed for modelers of 14 years age and older and that it contains 46 parts.

The back of the box has the assembly and painting instructions. This is done as a repeat of the box art figures that are labeled with numbers indicating the parts to use and numbers for the colors also. Below this is a list of paint colors in the Vallejo, Testors, Tamiya, Humbrol, Revell, Mr. Color and Life Color brand names.

Inside the box are 2 dark gray parts trees and a sheet with the parts trees illustrations on it all in a sealed cello bag.

The sheet will have to be constantly referred to for finding the parts needed during assembly, as there are NO part numbers molded on the trees next to the parts. Bad move here MiniArt!

The standing figure that has his left arm extended is also on this tree, He is divided also into separate head, torso, arms and legs. His leather helmet with the ear/neck flap are separate too.

The third figure on this tree is the one that is seated. He too is divided the same as the first 2 figures. His hat, ear phones and pistol holster are separate. 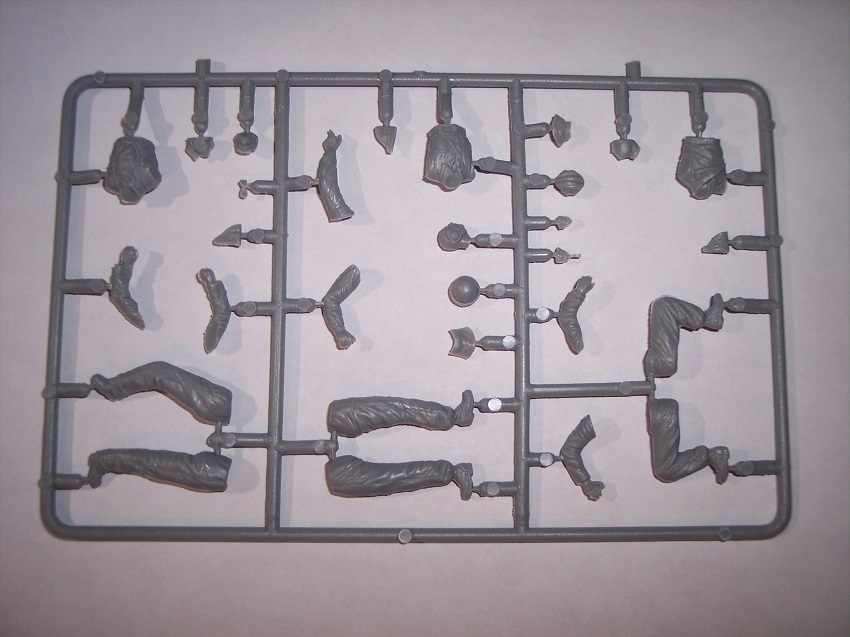 The second dark gray parts tree holds the 4th and 5th figures. One is the standing officer. He is divided like the first 3 figures, into separate head, torso, arms and legs. His hat is separate and so are the two sides of his ¾ length coat.

The last figure is the standing crewman with his hands in front of him, also in separate head, torso, arms and legs, His helmet with ear/neck flap and his pistol holster are separate too. 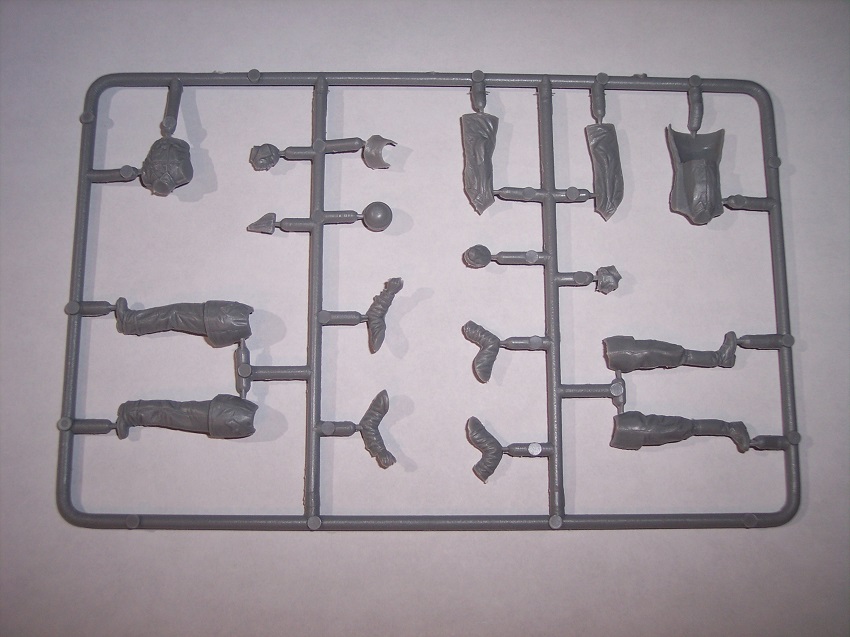 The detail is very good on these figures. However, a light mold seam runs down the center of the faces of all of the figures. Careful remover of this will be required.
Years ago, I traded a fellow in Hungary for 3 resin WWII Hungarian AFV kits by a company called Botond, One was of the 40 m Zrinyi II assault gun tank, another was of the 41 m Turan II medium tank (that shares the same lower chassis) and the 3rd kit was of the 39 m Csaba armored car. I never thought that any Hungarian WWII tanks would ever be produced in plastic but recent events have proved me wrong. Bronco has released a 40/43 Zrinyi II and a 44 m Zrinyi in addition to the newest one which is the 40 m Nimrod anti-aircraft tank. Hobby Boss has released a 38 m Toldi in 3 types: the types I, II and III.

I just had to have a Hungarian tank crew to go with my 3 resin kits and ordered the kit a full year ago when MiniArt announced it’s release. However, it was long in coming on the market and I just got it.

Highly recommended, but a little overpriced.