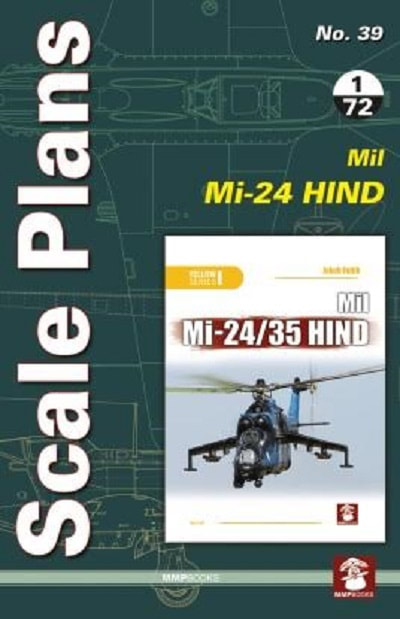 The Mil Mi-24 (Russian: Миль Ми-24; NATO reporting name: Hind) is a large helicopter gunship, attack helicopter and low-capacity troop transport with room for eight passengers. It is produced by Mil Moscow Helicopter Plant and has been operated since 1972 by the Soviet Air Force and its successors, along with more than 30 other nations.

Mushroom Model Publications (MMP) is a publisher based in the UK. All their books  and plans are printed in Poland by Stratus publications in English. Stratus also does their own line of books in Polish and English.

This set of plans comes in a soft cover that shows the cover art of MMP's book titled "Mil Mi-24/35 Hind" yellow series no. 6139 that is against a dark green background with a yellow line drawing on it of what I believe is a Yak-9.

It contains 5 scale line drawings of the helicopter on sheets that are 16" x 11 3/4" format, folded in the center of the 16" to fit the cover. The sheets are printed on both sides.

The second sheet has a side profile of a Mi-24D early version above illustrations of its internal bulkheads in 1/72nd scale.

The reverse side has 2 side profiles of the Mi-24D shown with and without the rocket pods mounted.

The third sheet has a side profile and top view of a Mi-24D with infa-red jamming unit (Spanka) chaff/flame dispenser and UPK-23/250 cannon pod and antennas system from V version mounted, in 1/72nd scale.

The Reverse side has an above, front and rear view of the Mi-24D in 1/72nd scale.

The fourth sheet has a side profile and front view of a Mi-24DU in 1/72nd scale.

The reverse side has a side and bottom view of a Mi-24P with chaff/flare dispenser mounted in 1/72nd scale.

This set of plans will be of great benefit to modelers that have a kit of this helicopter. It will also interest aircraft historians.

I want to thank the folks at Casemate, the North American distributor of MMP books for this review sample. A complete listing of all MMP titles can be seen on Casemate's site at:
www.casematepublishing.com