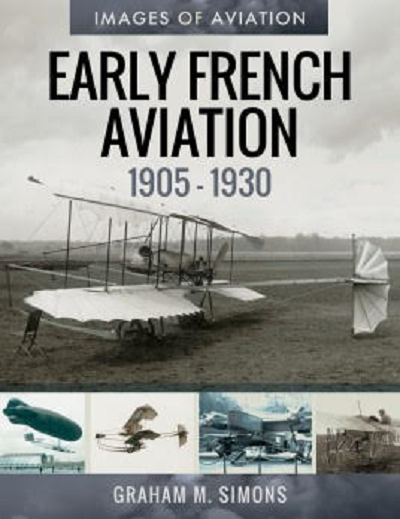 The back cover has 2 black and white photos. One is ove a Deperdussin monoplane at the 1912 French Air Show and a Farman 1912 with pilot and passenger in it.

France has been called the cradle of aviation by many. A fact that cannot be disputed, although some have tried.

By the end of the 19th century, she led the world in lighter-than-air flight. Any concern about heavier-than-air flight was dismissed as inevitable, and France would achieve it in due course.

By that time, Bleriot bravely inquired "Which way is England ?" The country was ready to address any perceived shortfall. Besides leading European aviation, France was the nation that named all the parts of an airplane with words many of which we still use everywhere today.

France was also the first nation to stage air-exhibitions. There are 37 black and white photos of activities at these in the book.

Unlike their counterparts in Britain, Germany and America, French designers were thoroughly entrepreneurial and tried a wide variety of adventurous styles from pusher to canard and monoplane to multiplane. There are many photos of these prototypal aircraft in the book. Many are really oddly constructed and a lot of them actually never left the ground and flew.

In 1909 the first Air Show was held at the Grand Palais. The "Exposition Internationale de locomotion aerienne" ushered in what was to become an enduring tradition. Every year, the aircraft exhibitions were a massive success. The interior design by Andre Granet, who since his youth had been fascinated by flying, was such a success that the Automobile Club subsequently commissioned Granet to do the same for the car shows.

It is not surprising that all this derring-do, all these technological achievements and all this innovation drew reporters and photographers like moths to a flame. The men, machines, the places and the events all were recorded, reported, reproduced and then were filed away.

Hundreds of images appeared in print, but thousands were printed up only as contact prints from large-format glass negatives and then disappeared into albums to be forgotten about.

In the mid-1990's, the author came across one such treasure-trove; a number of dust-covered albums containing around 500 images of aircraft, airships and expositions. It is doubtful if most have ever appeared in print before. So this will probably be the first time the events of these French pioneers have ever been showcased.

Photos in the book are all in black and white. There is no color illustrations.
Included in the book also are two photos of flying boats and 32 photos of sea plane prototypes.

One chapter is about blimps or lighter than air balloons, shown in 7 photos. This chapter also has a photo of a torpedo boat tender ship.

The last page of the book has a photo of French sailors aboard a ship looking up at a man-carrying kite in 1911 where it was still being used by the French Navy. These kites were used to get observers airborne to see what the enemy was doing.

Graham M. Simons is a highly regarded aviation historian with extensive contacts within the field. He is the author of "Mosquito: The Original Multi-role Combat Aircraft (2011), B-17 "The Fifteen Ton Flying Fortress (2011) and "Valkyrie".

This is a very interesting book. It will be of great interest to both modelers and aviation historians as well.

I want to thank Casemate Publishing, who sent me this review sample and the folks at Pen & Sword also.

Casemate is the U.S. Distributor of Pen & Sword books and all their titles can be seen on Casemate's site at:
www.casematepublishers.com