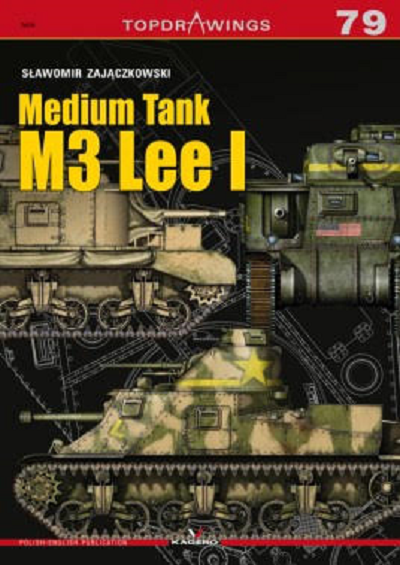 The M3 General Lee - an American medium tank from WWII era, also used by the British Army and in the US known as the Lee, in the United Kingdom as the Grant.

The M3 tank was created as a result of the need to replace the obsolete M2 tank, which did not match the WWII battlefield.

The serial production began in August 1941. The M3 tank had many components from the M2 light tank, including chassis, Wright R975 EC2 star engine and the shape of the combat compartment.

The M3 was meant to be a transitional solution due to the lack of turrets for a 75 mm cannon (M2 type cannon), which was mounted in the sponson on the right front of the hull.

The second anti-tank gun - 37 mm caliber - was mounted in the turret  and intended to fight enemy vehicles. The original M3 was equipped with a riveted hull and a turret in which the M3 cannon were mounted (37 mm).

In the M3A1 version the riveted turret construction, dangerous to the crew, was replaced with a cast version. The new turret was easier to assemble, which accelerated the production process. It also reduced the weight of the vehicle.

Both guns were equipped with gyroscopic stabilizers. Additional armament included two or three Browning M1919 machine guns, caliber 0.30 inches. In American M3, two Browning machine guns were mounted in a small rotating dome at the top of the turret. In the British version there was a entrance hatch for the crew.

The crew of the tank consisted of six soldiers (initially seven). A total of 6,258 M3 tanks were produced in all versions. They served in the British, Australian, American and Soviet armies.

Kagero Publishing is based in Lubin, Poland.

The do their books in both English and Polish language. This book has both languages in it.

The book comes in a resealable clear cello bag.

The cover art has a 3-view in color of the M3 tank posed over a white line drawing of the top of the tank against a black background.  Cover is printed on gloss coated stock.

The reverse side has 4 line drawing side views of an early production M3, after a modification of adding containers on the rear sweep of the hull and a change to the mounting of the antenna socket, a M3 with pressed road wheels instead of the complicated spoked ones and a modified hatch on the left side of the hull,
a M3 mid-production version with 75 mm gun and modified exhaust system.
There are six side views and a 5-view line drawing of various versions of the M3 (including 2 side views on the back cover of the book).

The 1st side view is a M3 Lee of F Company, 12th Battalion of the 3rd Regiment of the 1st Armored Division, Tunisia, January 1943. The tank is camouflaged with razzle-dazzle painting, which featured layers of mud camouflage on top of the base olive-drab color in web shaped form. With a white star with horizontal band going around the turret and a white letter L on the sides of the hull, both covered with mud.

The 2nd side view is M3 Lee of the 12th Company, 13th Regiment of the 1st Armored Division, Tunisia 1943. The tank featured mud camouflage with large pink spots. A rim at the bottom edge. Memorial inscriptions , probably nicknames, and naves of crew members, visible on the barrel and behind the side driver's hatch. With a yellow star with a horizontal bar around the turret and a yellow letter L on the sides of the hull.

The 3rd side view is a M3 of the British 10th Armored Division, North Africa, October 1943. The tank was entirely covered with the British sand colored paint as well as had, typical for the Brisigh M3's anti-dust covers and containers on the front of the tank.

The 4th side view is a M3 delivered to the USSR . This is a vehicle of the 24st Armored Brigade from the Battle of Stalingrad period. The tank featured winter camouflage with white washable paint. A red star with a cockade covering the America star with the rim.

The 5th M3 is of an unknown unit from the Battle of Kursk period, summer of 1943 with a Soviet unit. This tank features the unit number on the turret and the tank number on the hull.

The 6th M3 is from the Australian Second Army fighting in Burma from 1942 to 1943. The tank is in a sand and green camouflage.

The 5-view is a M3 of Company F, 2nd Battalion, 13th Regiment of the 1st Armored Division, Operation "Torch", Oran, Algeria, December 1942. The tank featured uniform olive-drab paint with alphanumeric symbols typical for the U.S. Army at that time, a yellow star with a rim on the turret, and L-shaped vertical symbol with the number 3 on the sides and on the front. The symbol indicated the F Company, and the number indicated the tank number within the company. An American flag was at the front of the tank (it was printed on paper and stuck to the armor) for faster vehicle identification.

There are no photos of M3's in the book. However, the line drawings and color illustrations will be of great interest and value to modelers that are building this tank.