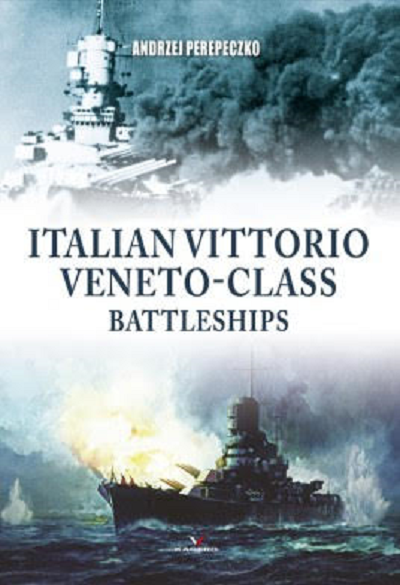 he Littorio class, also known as the Vittorio Veneto class, was a class of battleship of the Regia Marina, the Italian navy. The class was composed of four ships—Littorio, Vittorio Veneto, Roma, and Impero—but only the first three ships of the class were completed.

Built between 1934 and 1942, they were the most modern battleships used by Italy during World War II. They were developed in response to the French Dunkerque-class battleships, and were armed with 381-millimeter (15.0 in) guns and had a top speed of 30 knots (56 km/h; 35 mph).

The class's design was considered by the Spanish Navy, but the outbreak of World War II interrupted construction plans.

The first two ships, Littorio and Vittorio Veneto, were operational by the early months of Italy's participation in World War II.

They formed the backbone of the Italian fleet, and conducted several sorties into the Mediterranean to intercept British convoys, though without any notable success.

The two ships were repeatedly torpedoed throughout their careers: Littorio was hit by a torpedo during the attack on Taranto in November 1940 and again in June 1942; Vittorio Veneto was torpedoed during the Battle of Cape Matapan in March 1941 and while escorting a convoy to North Africa in September 1941.
Roma joined the fleet in June 1942, although all three ships remained inactive in La Spezia until June 1943, when all three were damaged in a series of Allied air attacks on the harbor.

In September 1943, Italy capitulated and signed an Armistice with the Allies. Littorio was then renamed Italia.

The three active battleships were transferred to Malta before they were to be interned in Alexandria. While en route to Malta, German bombers attacked the fleet with Fritz X radio-guided bombs, damaging Italia and sinking Roma.

Nevertheless, Italia and Vittorio Veneto reached Malta and were interned. The incomplete Impero was seized by the Germans after Italy withdrew from the war and used as a target, until she was sunk by American bombers in 1945.

Italia and Vittorio Veneto were awarded to the United States and Britain, respectively, as war prizes. Italia, Vittorio Veneto, and Impero were broken up for scrap between 1952 and 1954.

Kagero is based in Lublin, Poland. They print their books in both Polish and English. This book is all in English.

There are 107 black and white photos of the ships in this class, 50 line drawings, 11 maps and 3 data lists.

The goal of this publication is to present comprehensively both the hull construction, propulsion, and weaponry as well as the course of action and fate during the Second World War of Italian warships of the Vittorio Veneto type.

However, since the decisions about their construction were made due to the sometimes complicated political and military situations in the inter-war period, the genesis and gateway leading to the construction and equipment of the Italian warships is also included.

These ships were the most modern and in many ways even the best representatives of their class on the day of the outbreak of WWII. Although the Italian war fleet could not pride itself on successes during the fighting in 1940 -1943, nonetheless the history of WWII in the region of the Mediterranean sea is undoubtedly worth knowing.

Andrew Perepeczko (Polish: Andrzej Perepeczko) was born 5 June 1930 in Lviv, Ukraine. During WWII, he stayed mainly in Warsaw, Poland. At the end of the war, he entered Gray Ranks (Polish: Szare Szeregi), a paramilitary Scouting association of the Home Army (Polish: Armia Krajowa).

His father fought under the command of General Maczek in France and was deployed in England; his mother was a member of Home Army and took part in the Warsaw uprising in 1944.

After the war, he graduated from the Naval Shipbuilding College in Gdansk, Poland, and then the Mechanica Faculty of the Gdynia Maritime School.
In 1948 he began to work onboard Polish ships. He was a trainee, stoker, motorman and ship engineer's assistant.

In 1953-55 he was removed from the fleet, deported from Gdansk, Poland, and exiled to a coal mine as part of military service in the so-called mining battalions.
In 1956 he was granted amnesty, and he graduated from Gdansk University of Technology with a master's degree in shipbuilding engineering. He worked at the Ship Construction Office and the Polytechnic Institute, and from 1962 at the State and Higher Maritime School and the Maritime Academy as a lecturer, docent, and professor.

He also performed the duties of the dean.

While working at the university, he periodically sailed as an engineer officer. He defended his doctoral thesis in the area of the history of naval warfare at the university of Gdansk and has written more than a hundred books.

These are novels for adults and children, textbooks and academic scripts, maritime history books, articles and stories.

This book will be of great value and interest to modelers that want to build these kits or to naval historians too.