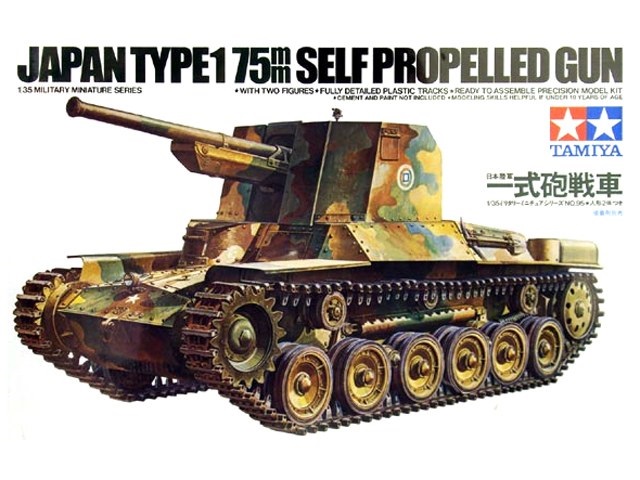 The most successful and widely used of all Japanese tanks in WWII was the Type 97 Tank Chi-ha. Designed in 1936 and accepted in 1937 (Japanese year 2597, hence Model 97) as a replacement for the Medium Tank Type 89 which had been in service since the late 1920’s.

The type 89 which had been influenced by Western designs and was similar in appearance to such types as the Renault NC and the Vickers Medium C. Work on the type 89’s replacement started in 1935 and note was taken of contemporary Western designs notably the latest British ideas.

This was before the German medium tank designs had appeared. The most impressive of the British designs was the A6, often called the “16 tonner”. This was a fine tank, but only a few development models actually saw service due to economic difficulties.

The new Japanese design was intended to match the A6 in firepower and performance and a speed of over 35 km/h and a weight of about 15 tons was specified. The main armament was a 57 mm gun (the A6 had a 47 mm gun).Simplifications were made to cut down production costs.

Bell-crank and coil type suspension was designed to save weight. Other features were very advanced for the time and included a monocoque hull of welded and riveted construction with over-hanging side sponsons.

Maximum armor thickness was 25 mm and there was a rear-mounted air-cooled diesel motor. During WWII,the Japanese fell behind in tank development and production. This was partly because the early Japanese successes were achieved with the equipment they had available, and partly because production priority had been given  to guns, aircraft and naval vessels.

When the Allies fought back in the Pacific and S.E. Asia, they had vastly superior tanks. The Japanese forces could only produce stop-gap AFV’s to try to reinforce their now out-numbered and out-gunned tanks.

To up-date the medium tank, some self-propelled gun models were produced in small numbers, based on the basic Type 97 Chi-Ha chassis, and known as “Gun Tanks”. Gun Tank No. 1, “Ho-ni” had a simple open shield replacing the Chi-Ha turret with a Type 90 75 mm gun. This was a medium velocity field gun adapted for AFV use with performance comparable to that of the 75 mm gun fitted in the American Sherman tank.

The front shield had 50 mm armor and there was a five-man crew. The V-12 diesel engine gave 170 hp at 2000 rpm and the top speed was 38 km/h. Weight was 15.9 tons. The conversion was very cheap and simple, and gave poor protection for the gun crew. It did however give the Japanese forces an AFV that was in theory capable of knocking out a Sherman tank.

Tamiya is an old prolific model company based in Japan. They make all manner of model subjects in the popular scales.

The box art is one of Tamiya’s “signature type” of the kit subject posed against an all white background. I have only ever seen a handful of kits by them that had a scenery as the box art.

This box art shows a Type 1 “Ho-ni” in a pattern of khaki, dark red-brown and dark green wave pattern camouflage. On the side of the gun shields is a symbol of a white circle with a white circle in the center that has a black square on it. It is a vehicle with the 2nd Company, 2nd Artillery Regiment, 2nd Tank Division (marking included on the kit’s decal sheet).

One side panel of the box has a small color repeat of the box art, followed by a one-paragraph history of the Type 1 in English, followed by color illustration of a Japanese tank crewman and model particulars “This is a plastic model kit in 1/35 scale of the Type 1 S.P. gun of the Japanese Army. Open-top fighting compartment has detailed interior. 75 mm gun can be moved vertically and horizontally and is precisely reproduced. The kit contains two realistic figures representing tank men in action. The body of the tank has clearly visible rivets realistically reproduced”.

MADE IN JAPAN is said here above Tamiya’s street address in Shizuoka-City, Japan.

The other side panel has 4 color illustrations of other AFV kits that Tamiya marketed.

No kit numbers are provided for any of these. Tamiya’s address appears again here.

On  one end of the box is 2 black stickers with white lettering on them. One says it is a precision model kit. Modeling skills helpful if under 10 years of age. The second one has Model Rectifier Corp’s address in Edison, New Jersey (they once were the U.S. importer of Tamiya Kits) and Manufactured in Japan.

This kit is based on the Type 97 medium tank, so most of what is in the box is the same as what was in Tamiya’s sister kit of the 97. The only difference in this Type 1 kit is the letter C parts tree and the decal sheet.

The instructions consist of a single sheet that accordion-folds out into 6 pages in 6 ¾” x 10 1/8” page format.

Page 1 of the instructions begins with a black and white repeat of the box art, followed by the history of the Type 1 in English and German.

Page 2 has READ BEFORE ASSEMBLY instructions, followed by the first 3 assembly steps.

Page 3 through the top of page 5 give a grand total of 11 assembly steps.

The bottom of page 5 has the parts trees illustrations and black and white illustrations of the box arts of 4 other AFV kits that Tamiya marketed.

Again, Tamiya does not provide the kit numbers for these.

Page 6 has a 3-view illustration for a scheme for a Type 1 with the Field Artillery School. It is in the khaki, dark red-brown and dark green wave camouflage with a white 370 on the sides of the hull. It has a black plate on the right side of the rear hull with a white star and some Japanese writing on it.

Next is a side profile of the box art subject. It is shown blank of any color shading like the first subject shows and it says to paint the same scheme on it. Here it shows it also has a black plate on the right rear with a white star followed by Japanese writing and the number 231.

Below the top two is a illustration of the front of a Type 1 that is a vehicle with the 4th Platoon, 14th Tank Regiment. Again it is blank and we are told to paint it in the 2 color wave pattern. On the left front of the hull is a small Japanese flag and there is a white letter “Z” on the other side. A black plate with a white star, Japanese writing and number 308 goes on the rear.

A final illustration is of the front of a Type 1. It too is blank and we are told to use the 3 color scheme. It just has a black plate on the rear with a white star, Japanese writing and the number 221 on it. It is a vehicle with the 4th Army Technical Laboratory. 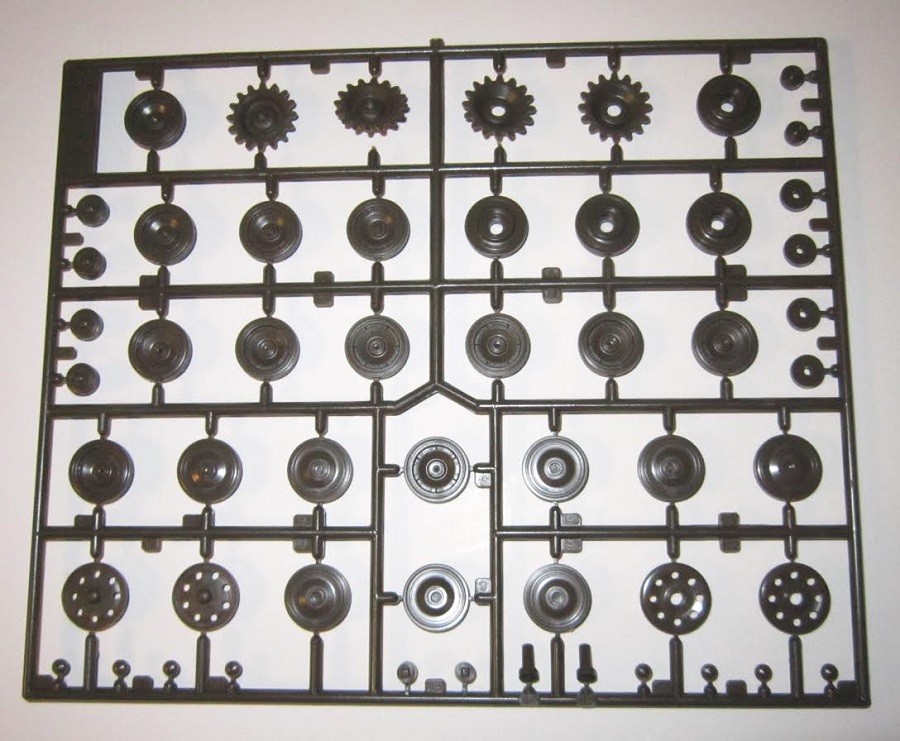 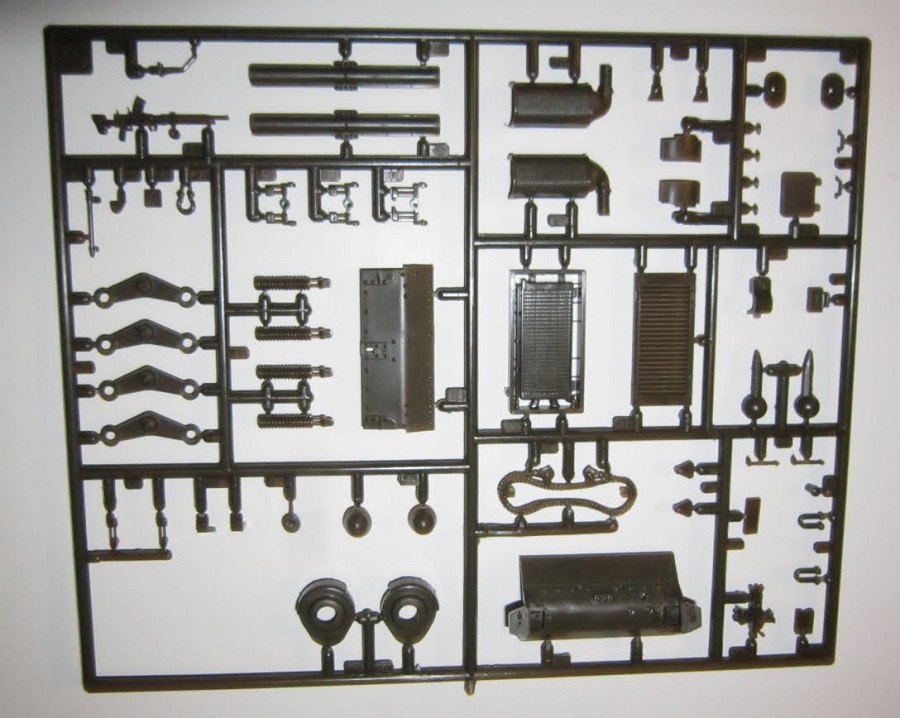 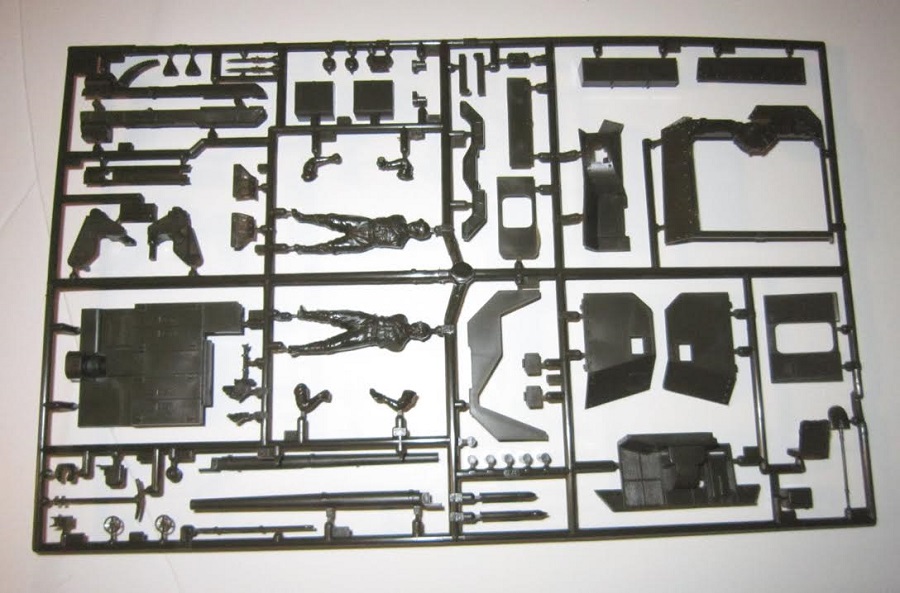 The loose dark green hull top and hull tub parts are next.

There are two long runs of black vinyl rubber band type treads. These are the type that have to be heat-riveted into loops and not the latest glueable type.

There is also a tree of black vinyl poly caps that holds 9 of them.

The decal sheet, instructions and the little color catalog of Tamiya products completes the kit's contents. 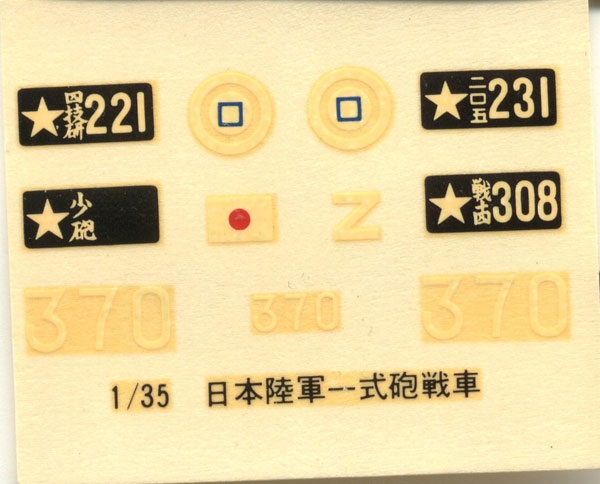