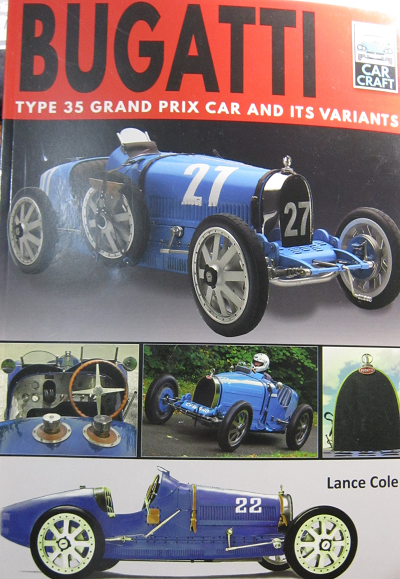 Ettore Bugatti changed engineering history with his genius and innovations. With its clever engine design, new suspension thinking, and distinct body style, Bugatti’s T35 and its variants defined a new era of design and driving and must surely rank as true “super cars”. A motor sport legend was also cast down by these Bugattis.
​THE BOOK:

At the top of the cover art a 1/8th scale Amalgam Collection brand (Bristol UK) model of the Type 35 (1924) Bugatti is shown in a color photo. It is overall medium blue with a white no. 27 on the grill, hood and tail side, followed by white serial no. 6964-J1.

Below it there is 3 color Photos of real Bugattis.

The first one shows the twin filler gas caps used on Type 35s and some Type 51s.

The second one shows Mike Marshall’s Type 35 (supercharged special) in medium blue finish, being driven by him at Prescot. He wears a white helmet.

The third one shows the grill of a Bugatti.

At the bottom of the cover there is a color profile of a Type 35B with the white no. 22 on the side of its hood. It is overall medium blue and was used by Rene Dreyfus, including in his win of the 1930 Monaco Grand Prix

The book contains 110 color photos and 36 black and white ones.

There are numerous walk-around photos showing the interior and exteriors of Bugattis.

Two color 3-views of blue Bugattis, a side profile of a blue one from France that has a white no. 14 on the rear of its body  sides.

Two bright red Bugattis from Italy. One with white no. 7 on the rear of its body sides.

There are 10 color walk-around photos of the Amagram 1/8th scale resin and metal kit, that is featured also at the top of the cover art.

The Revival (Italy) brand 1/20th scale Bugatti Type 35B in overall blue with white no. 7 on the sides of its hood and on its radiator. It carries the spare tire on its side.

Parts of the Airfix 1/32nd model and its box art is shown, with 8 color photos of its kit parts.

There are numerous other color photos of Bugatti models and a listing of no less than 39 names of model companies that produce kits of the Bugatti.

The last page of the book has 3 black and white cover arts of auto books that Pen & Sword publishes: the cover of this Bugatti book, Jaguar E-Type and Porsche 911.

I want to thank Casemate Publishers for this review sample and the folks at Pen & Sword. Casemate is the North American distributor of Pen & Sword books and all their titles can be seen on Casemate’s website at:
​www.casematepublishers.com