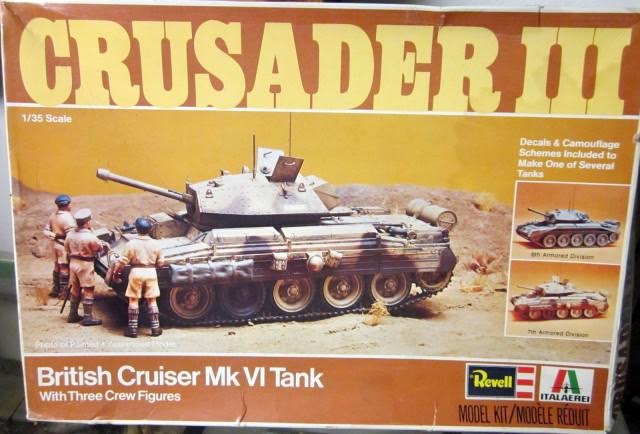 The Tank, Cruiser, Mk IV (A13 Mk II) was a British cruiser tank of the Second World War. It followed directly on from the Tank, Cruiser, Mk III (A13 Mk I). The first Mk IVs were Mk IIIs with extra armour fitted to the turret. Later Mk IVAs were built with the complete extra armour. The tank was used in France in 1940 and in the early part of the war in North Africa, before being withdrawn from service.

Britain became interested in fast tanks after observing the Soviet BT tanks during the 1936 Red Army manoeuvres. The BT was based on the revolutionary designs of American J. Walter Christie and a team from Morris Motors was sent to the United States to purchase a Christie tank and the rights to build more. The tank became known as the A13E1 and was delivered in late 1936 but the hull was too small and this led to a second British-built prototype.

The A13E2 was built to mount the turret of the Vickers designed Cruiser Tank MkI (A9). This carried a 40 mm Ordnance QF 2-pounder gun and co-axial .303 water-cooled Vickers machine gun. The drive train was also revised, with the road wheels no longer powered so the tank could not be driven on its wheels alone. Better tracks were used, with rear-mounted drive sprockets and in trials, over 40 miles per hour (64 km/h) was attained on them but later the speed was governed to 30 miles per hour (48 km/h). The armour of the A13E2 was 15 millimetres (0.59 in), in line with other pre-war fast tank designs.

The A13E3 was the final trials model, which led to the production tank, A13 MkI, Cruiser Tank Mk III, which entered production in 1939 at Nuffield Mechanization & Aero Limited, a munitions subsidiary of Morris Motors. An order for 65 tanks was placed and at least 30 tanks completed when the War Office decided to build a new model with thicker armour. The A13 MkII, Cruiser Tank Mk IV, had a maximum armour thickness of 30 millimetres (1.2 in) and faceted armour was mounted on the original turret sides and rear. This gave the tank a far more modern appearance; some Mk III tanks were re-built to Mk IV standard while at the factory.

The .303 Vickers machine gun gave constant trouble and was replaced by the 7.92 mm BESA. All British tanks were to have their designs modified to mount the new weapon from early 1940. This led to the main production version, the A13 MkIIA, Cruiser Tank MkIVA. A few examples were sent with the BEF to France, along with most of the earlier A13s. It is not known how many A13 MkIVA tanks were built the numbers depending on the source. Between the Cruiser Mark III and Cruiser Mark IV, 665 had been built when production ended in 1941.[2] English Electric, Leyland and LMS Railway were also involved in A13 production.

In France the A13 did not do well, due to poor crew training as a result of its being rushed into service. Many tanks shipped to France were in poor condition and some were so new that they had vital parts missing. The A13 performed much better in the deserts of North Africa and coped with the conditions better than some other designs. It was fast, adequately armed and armoured against Italian and German tanks. It remained an effective weapon until late 1941, when newer models of the Panzer III and Panzer IV appeared with thicker armour and larger guns. In North Africa it was the anti-tank gun which claimed the vast majority of British tanks lost in battle; German tanks accounted for few British losses, contrary to popular belief.

The A13 MkIII, Cruiser Tank Mk V, was a radical departure from the original A13 design and constituted a new tank. The hull and turret were redesigned and it used a new flat-12 Meadows engine, with radiators mounted in the front hull. The Covenanter tank was built in large numbers but early models suffered from chronic engine overheating, confining it to temperate-climate use and was used only for home defence and training. The A13 MkIIA was replaced by the A15 Crusader tank, which was similar to the Covenanter but used the original A13 engine.

The box art is a color photo of the model made up and posed in a desert diorama. The Cruiser is in a base of sand with dark green wave pattern on it. No marks are shown. Three British soldiers in summer uniforms are standing in front of it.

One corner of the box art has a side profile of the same tank in the box art and another one.
​WHAT'S IN THE BOX:

This kit contains 3 loose tan parts trees and a black vinyl tree. None are cello bagged. The decal sheet and instructions complete the contents.

Page 1 of the instructions begins  with the Cruiser's history and specifications in English, followed by illustrations of tool usages, HELPFUL MODELING TIPS and a paint color list.

Page 3 through 10 give a grand total of 10 assembly steps.

Page 11 has step number 11 for the figures assemblies and painting. Step 12 is a 3-view for a Cruiser.

Page 12 has another 3-view for another Cruiser and a third one.

Trees are not alphabetized, but they are numbered. This means careful study of the assembly steps will be needed to get the correct parts for each assembly. Bad move Revell/Italeri. 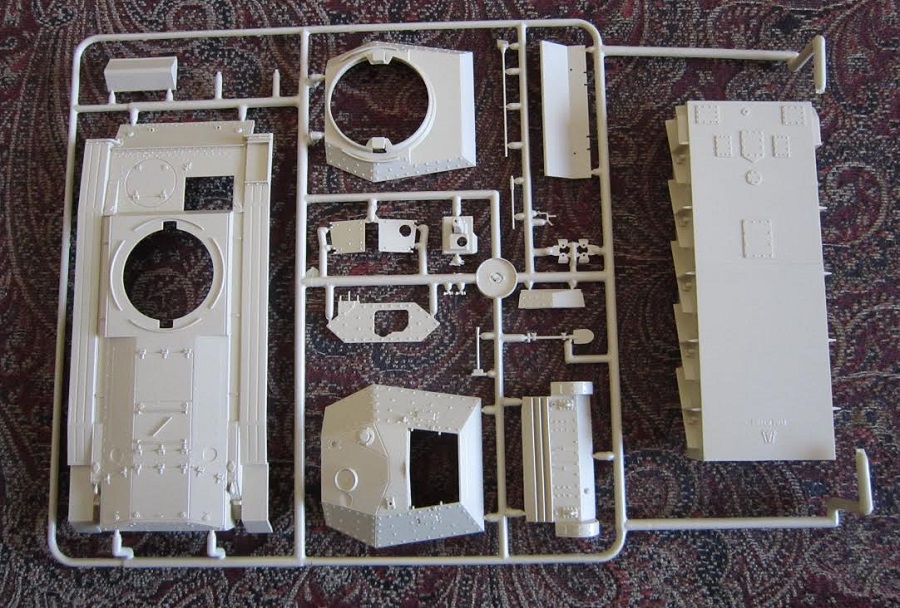 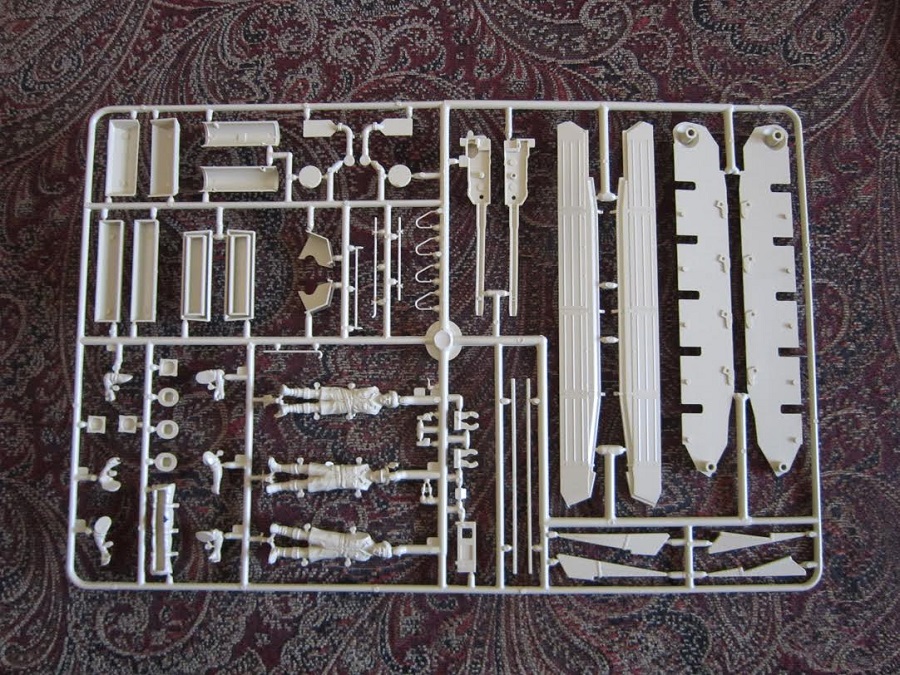 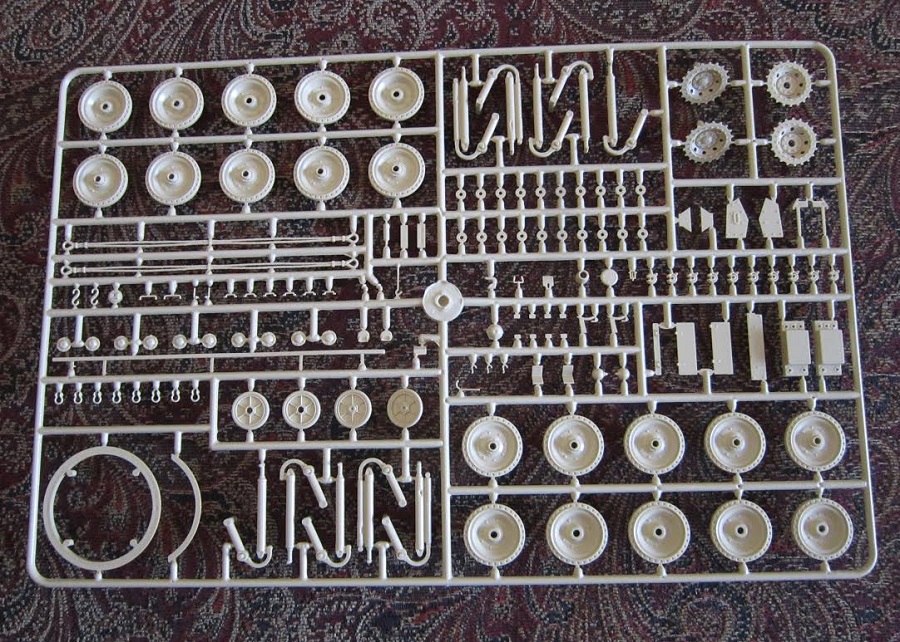 ​Next is the black vinyl treads. You get 2 long runs and 4 short runs.

There are no clear parts, nor any internal details other than the beech on the main gun.

There is an order blank in the kit to send in and join the now defunct Master Modeler's Club for $1.50. Which got you a pair of tweezers, a spatula for applying putty, a set of clamps, your membership card and certificate, a kit catalog and a year's subscription to the club's publication.

Quite a lotta bang for the money. 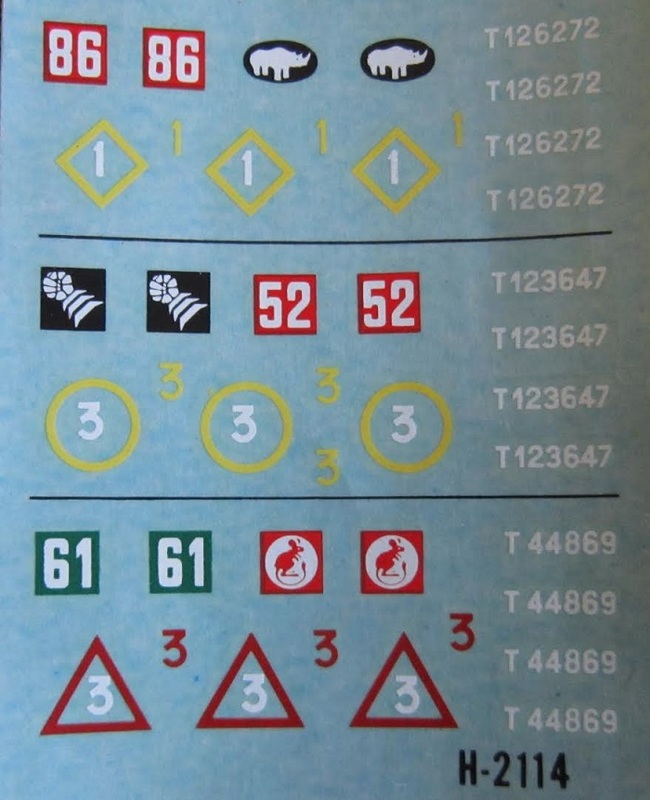 ​I bought a Armo brand set of resin parts and turned-metal barrels to convert this kit into a anti-aircraft version (set no. 35528).

Armo is a sub-name of Jadar Model in Warsaw, Poland. Their street address and web site address is on the end of the box. 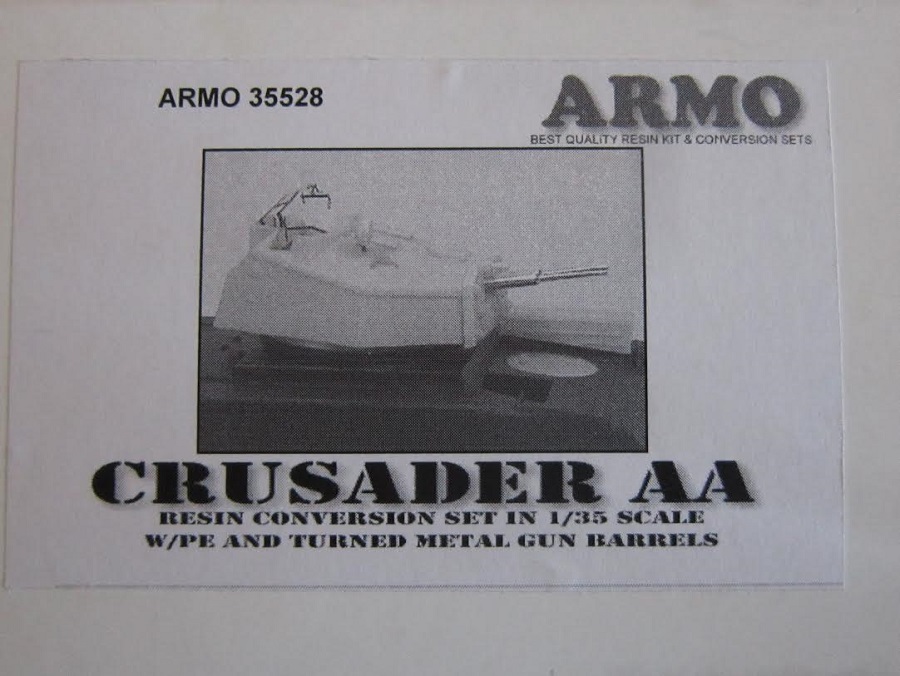 ​This set comes in a generic white, end-opening type box. The box art is a sticker with a black and white photo of the turret made up.

Inside the box in 3 zip-lock type cello bags are 9 resin parts, 2 turned-metal anti-aircraft barrels, a PE fret and the instructions.

The instructions consist of a single sheet in 8 1/2" x 11" format, folded 3 times to fit the small box. It has 2 exploded drawings on ne side of it for assembly.

The thing is, Italeri did a anti-aircraft version of this tank later. Which I have and it is reviewed here on Indy AMPS in the archives.

I don't know which of the two kits has the better turret? 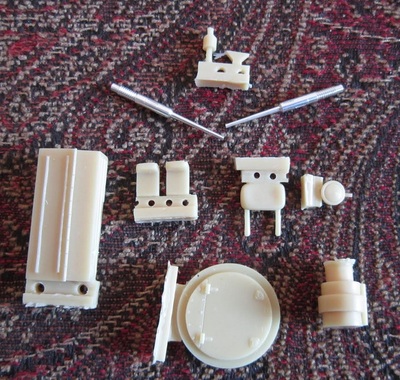 Both kits were courtesy of my wallet years ago. Highly recommended.
The Cruiser kit has a copyright date of 1977.