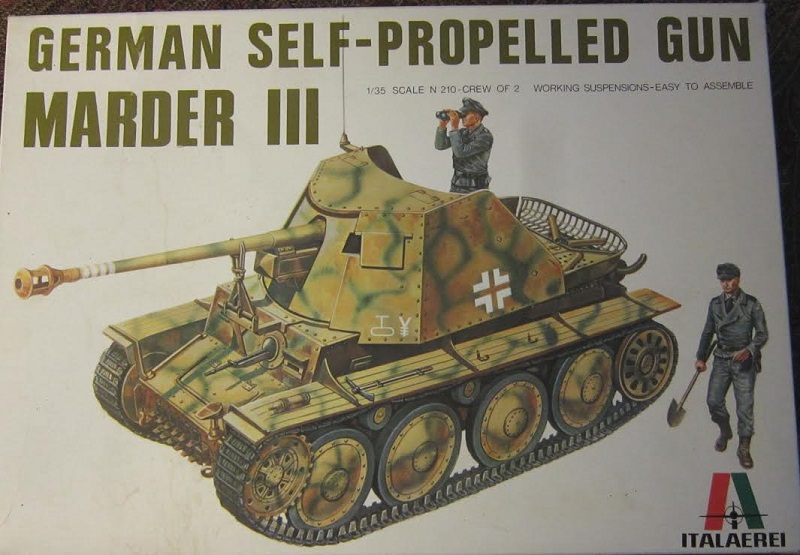 
Marder III was the name for a series of World War II German tank destroyers. They mounted either Soviet 76.2mm F-22 Model 1936 divisional field guns, or German 7.5 cm PaK 40, in an open-topped cupola on top of the chassis of the Panzer 38(t). They offered little protection to the crew, but added significant firepower compared to contemporary German tanks. They were in production from 1942 to 1944 and served on all fronts until the end of the war, along with the similar Marder II. The German word Marder means "marten" in English.
Marder III Ausf. H, Sd.Kfz. 138
The next variant of the Marder III fielded the standard 7.5 cm PaK 40 German anti-tank gun on a slightly modified Panzer 38(t) Ausf. H chassis. This chassis still had the engine in the rear of the vehicle but, unlike the previous model, this vehicle utilized the fighting compartment of the Panzer 38 in the center.

This allowed the crew to stay low in the center of the vehicle, lowering their exposure to small arms fire and shell fragments. But, because of the rear-mounted engine, there was only enough room for two men to stand in the center. Large side armor gave additional protection for the crew. However, the thin horseshoe shaped armor only protected the front and sides; the rear and the top were exposed. Thirty-eight rounds of ammunition for the gun were carried. As with the Sd.Kfz.139, this vehicle also carried a Czech manufactured 7.92 mm machine gun in the hull.

Italaerei (now spelled Italeri) is an older prolific model company based in Italy. They make all manner of model subjects in the popular scales.

The box art shows the Marder III posed against an all-white background, similar to how Tamiya brand does all their box arts..

The tank is in a base of earth-yellow with dark-green squiggle on it. It has a large white skeletal German cross on the shield sides and a white tactical mark and division logo on the right side of the front of the shield. There are 4 white kill bands around the gun barrel.

A commander figure is shown standing behind the tank looking through a pair of binoculars. A second crewman is walking beside the tank holding a shovel.

One side panel begins with a small color repeat of the box art, followed by the history of the Marder III in English.

No kit numbers are shown for these 4 kits.
​WHAT’S IN THE BOX:

​This box is blousy It has a letter L void around the parts.
A sealed cello bag holds 3 tan parts trees and a tree of black vinyl tracks. 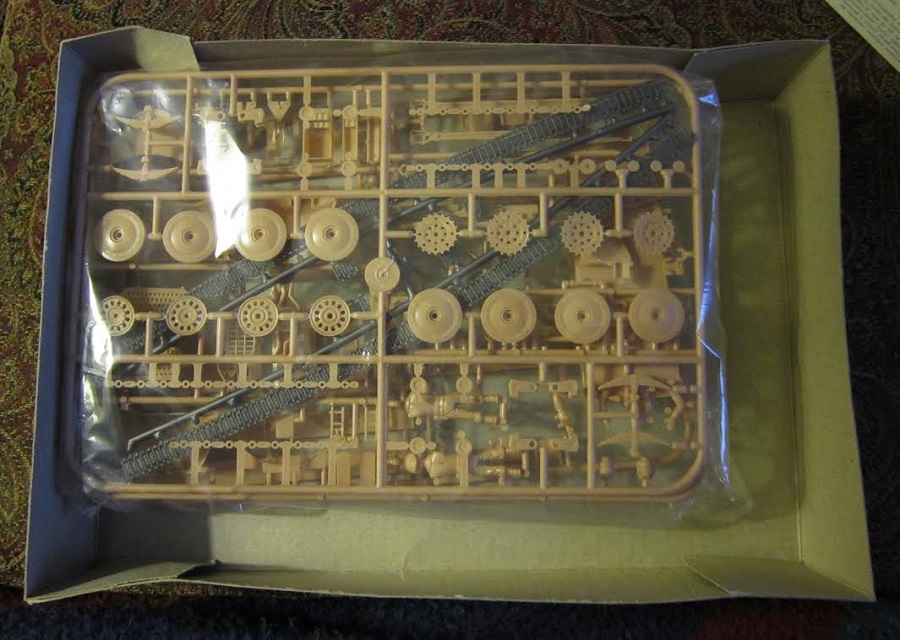 The instructions consist of a single sheet that accordion-folds out  into 8 pages in 6” x 11 ¼” page format.
Page 1 of the instructions begins with a black and white photo of the tank made up with the nickname Paula in white above the German cross on the sides of the shield.

This is followed by the history of the Marder III in Italian, English, French and German.

Page 2 begins with recommendation about the kit in the 4 languages above the parts trees illustrations.

Page 3 through 5 give a grand total of 6 assembly steps.

Page 6 and 7 have painting and marking illustrations as three 3-views.

The first scheme is in a base of sand-yellow with dark-green and dark-brown vertical slanted streaks.

The second scheme is in a base of sand-yellow with a spider-web pattern of dark-green.

The third 3-view is just a uncolored line drawing.

All 3 have letters pointing to areas on them where a particular mark should be placed. The big problem is that there are no letters on the decal sheet next to the marks. Bad move Italaerei !!

The second problem is that over the years this kit has been in my stash in my basement, moisture got to it. I don’t know if it is salvageable or not…..sigh.

Page 8 begins with illustrations of the various marks on the decal sheet and a listing identifying each mark. The bottom of the page has figure painting instructions above a black and white photo of the model made up.

The trees in the kit are not alphabetized, but they are numbered. This will make extra work to find the right parts for each assembly. Another bad move Italaerei !! 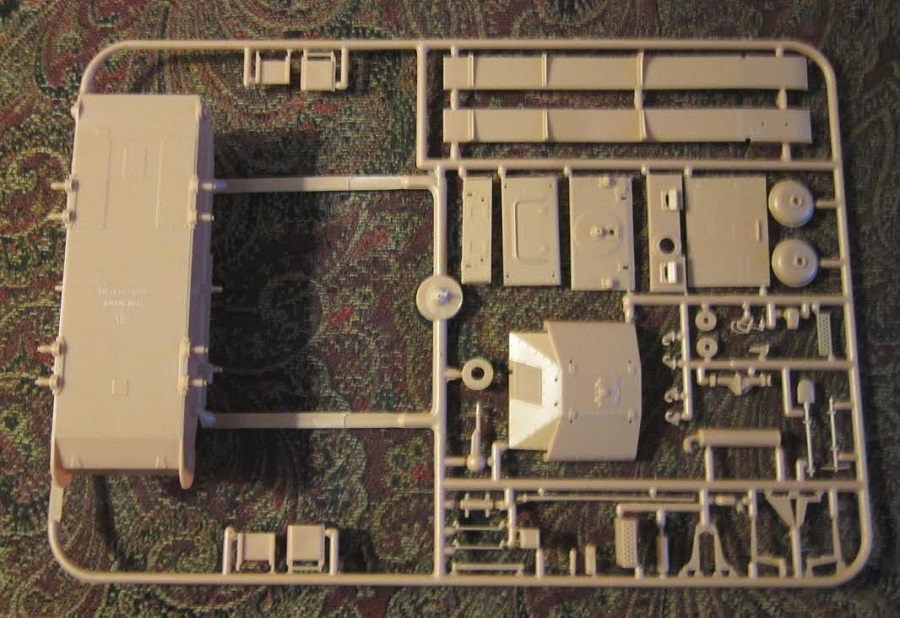 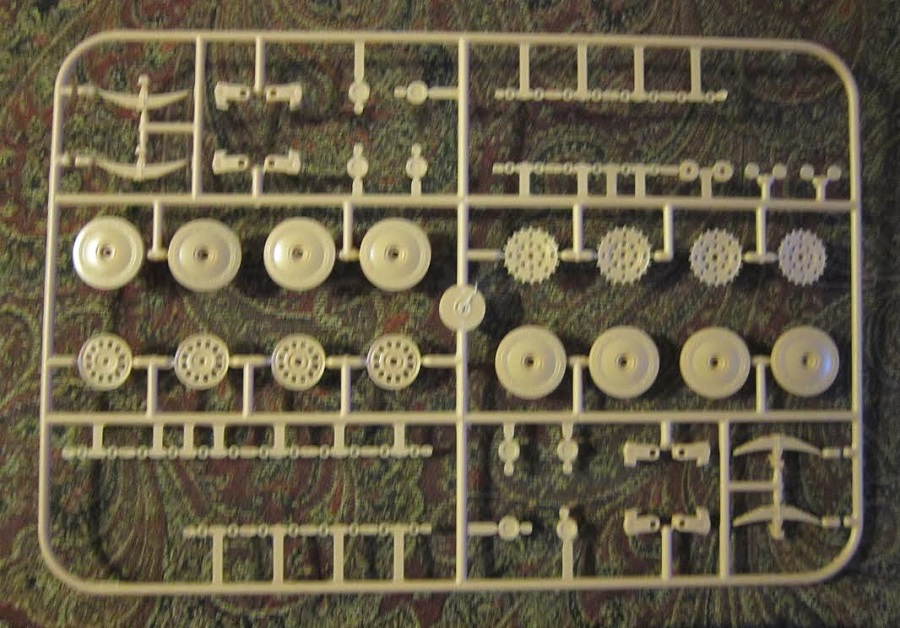 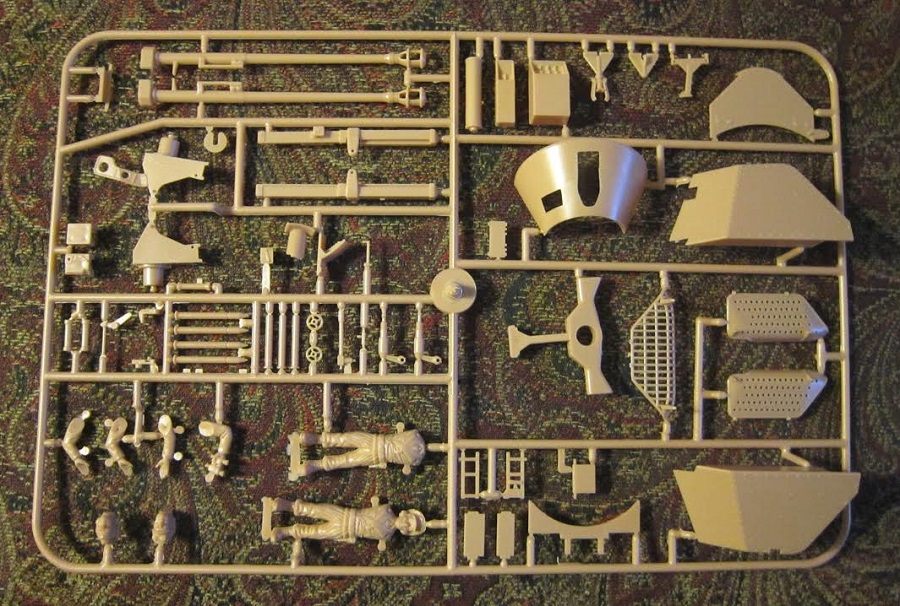 The black vinyl treads are next. There are 2 long runs and 5 spare sections (7 parts) The long runs have to be heat-riveted into loops,. They are not the newer glueable type.

​The decal sheet completes the kit’s contents.
There are no clear parts in the kit.

Also in the 1980’s it appeared a third time as kit no. 09 by Tomy brand.
So, it can probably still be readily found.