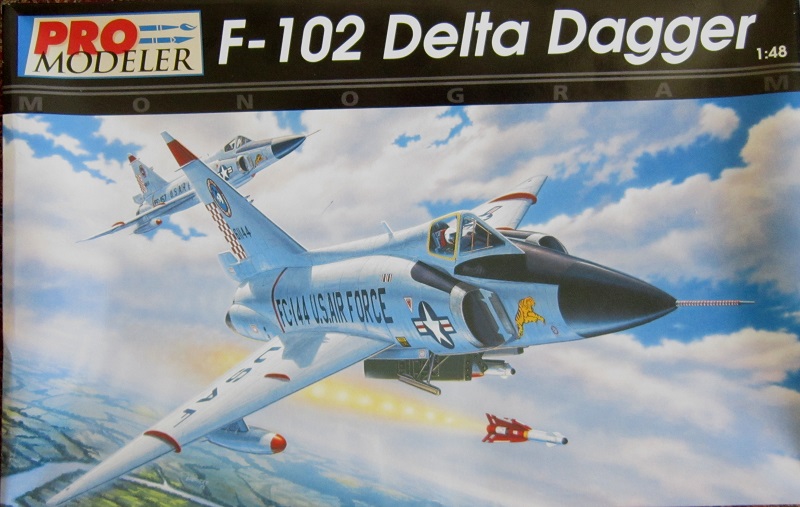 Revell/Monogram is a dual company with offices in the U.S. and Germany. They are both prolific manufactures of all manner of model subjects in the popular scales.

Sometimes called the “interim interceptor”, Convair’s F-102 Delta Dagger was originally intended to see only limited service until the more advanced F-106 Delta Dart could be put into production. However, problems and delays with the F-106 program resulted in the F-102 being built in far greater numbers than its successor, and it remained operational longer than any other interceptor in the U.S. Air Force.

The F-102 was a direct descendant of the XF-82, which was the world’s first aircraft to fly with a delta wing. Throughout its incubation period, many design changes were made to the Delta Dagger, most of which reflected the attempt to build a production aircraft that could exceed the speed of sound in level flight. The canopy and intakes were redesigned, the fuselage was lengthened, and it was given what was often referred to as the “Coke bottle” or area rule shape. Noticeable design changes were also made to the nose, the engine exhaust area, and the vertical tail. These changes proved successful, and the F-102 eventually gained the distinction of being the first interceptor in the Air Defense Command capable of super-sonic speeds.

Developed from the start not merely as an aircraft, but as a weapons system of which the air frame was only the carrier, the mission of the F-102 was that of pure interceptor. Its task was to engage and destroy any enemy aircraft that attempted to penetrate friendly airspace. Its fire control system, weapons, and avionics were all designed with this one mission in mind.

Realizing that any enemy bomber that reached its target could do terrible damage with a nuclear weapon, Air Force planners wanted the interceptor armed with weapons that would insure the destruction of both the bomber and its nuclear payload. As a result, cannons had already been replaced with rockets, and guided missiles were entering the inventory about the same time the F-102 was designed. The Deuce, as it became known by its pilots and ground crew, was armed with twenty-four 2.75 inch rockets and six AIM-4 Falcon guided missiles. The Falcons were produced with both radar and infrared guidance systems. Together, the rockets and Falcons gave the Delta Dagger a formidable knockout punch, against any enemy aircraft no matter what its size.

As originally produced, the F-102 had what was called a Case X (Case 10) wing. It was characterized by an upturned and squared off tip, and the elevens were generally rectangular in shape. This Monogram model represents the Case X wing. Later aircraft, beginning with serial number 56-1317, had what was known as the Case XX (Case Twenty) wing. It had turned down tips which were rounded, and the elevens were enlarged with angled outer edges.

This Pro Modeler kit comes with a choice of markings for two different F-102A.

The aircraft is from the 509th Fighter Interceptor Squadron based at Clark Air Force Base in the Philippines. This aircraft was one of four Delta Daggers to deploy to Tan Son Nhut Air Base, South Vietnam, during March of 1962. This deployment was in response to a threat posed by unidentified aircraft penetrating South Vietnam’s airspace. Although the four F-102s flew only twenty-one sorties, and were at Tan Son Nhut Air Base for only a week before being replaced by U.S. Navy aircraft, this was the first of many deployments made by Delta Daggers to Southeast Asia that continued for the next eight years.

The second F-102 represented in the kit is from the Connecticut Air National Guard’s 118th Fighter Interceptor Squadron. This unit’s Delta Daggers were marked with a distinctive stylized eagle motif on their vertical stabilizers.

This kit comes in a large shrink-wrapped tray and lid type box. The box is TOO LARGE. It is 3” too long and a 1 ½” too deep.

Because of the depth the lid became bellied inwards when the kit was shrink-wrapped.

The box art shows 2 F-102 flying through a heavy cloud covered overcast above a countryside. The F-102 in the forground is firing one of its rockets. Both aircraft are in overall ADC gray FS16473 with black nose cones and black anti-glare panels in front of their windscreens. They have titanium engine tail exhaust nozzles, a red stripe at the top of their tails, red and white checkerboards on their rudders, a squadron logo of a skull in a circle on the tail with  a black serial no. of 61144 on the aircraft in the forground and 61157 on the aircraft behind. There are red noses on the underwing drop tanks. Down the side of the aircraft in the foreground is the large serial no. FC114, then U.S. AIR FORCE followed by the star and bar insignia. On the nose is a leaping Tiger illustration. The aircraft in the background carries these same markings.

One side panel has 4 walk around color photos of the model made up in the scheme of the aircraft in the foreground of the box art, followed by features of the kit “Plastic model can be painted to match photos on the box. Paint not included. Model cement (not included) required for assembly. Length: 17 1/16th inches (43.2 cm), Wing span: 18 15/16ths inches (48.1 cm). Kit contains 103 pieces. Pictorial instruction sheet provides assembly instructions in English” This is in English and French. The copyright date is said to be 1995. Revell/Monogram Inc. is said to be in Morton Grove Illinois, USA and the kit was made in the USA. Below this is Revell of Germany’s street address.

The other side panel has 2 color photos of the model made up in each of the provided color and marking schemes, followed by a one paragraph history of the F-102 in English and French.

This kit contains 5 medium gray parts trees in 4 sealed cello bags, a clear tree in another sealed cello, the decal sheet, instructions and a large poster.

The instructions consist of a staple bound booklet of 20 pages in 8 ½” x 11” page format.

Page 1 of the instructions begins with a small black and white photo of the model made up in the scheme of the F-102 in the foreground of the box art, followed by Monogram’s address in Morton Grove, IL. The copyright date given again as 1995 and MADE IN USA.

Page 2 begins with “Read this before you begin” in English, German, Spanish and French, followed by international assembly symbol explanations, a paint color list, the address to contact to get a Federal Standard color list and Monogram’s address and 1-800 phone number to contact with any problems encountered with the kit.

Page 3 through 17 each have an assembly step drawing on them. In these steps there are some black and white photos of different parts of the anatomy of a real F-102 that match what’s being built in that assembly step. NEAT! There is also extensive written instructions in each assembly step to tell you how to proceed.

Page 18 has a 2-view of a F-102 with the 509th Fighter Squadron, Thailand, March 1962. This is the aircraft in the foreground of the box art and already described above.

Page 19 has a 2-view of a F-102 with the 118th Fighter Squadron, Connecticut Air National Guard, 1969. It is in overall ADC Gray FS16473 with black nose cone and anti-glare panel in front of the windscreen. The rudder has a black border surrounding an eagle. At the top of the rudder is the black word Connecticut above the Air National Guard logo of a minute-man inside of a circle, followed by the serial no. 0-61149 below it in black lettering. Large black lettering that spans the fuselage says U.S. AIR FORCE followed by the star and bar insignia below the cockpit.The slogan “the fighting Yankees” is in cursic lettering on the side of the drop tanks with a logo of a running man on a yellow circle.

There are no parts trees illustrations provided in the instructions.

Parts are numbered on the trees, but they are not alphabetized. So, some searching will have to be done to get the right parts for each assembly.

The large poster in the kit has a color illustration of a P-40E on one side of it that is shooting down a Japanese Betty bomber. The P-40E is in overall olive drab with light gray undercarriage. It has an exploding star with the name STAR DUST on the nose. LT. A.J. Reynolds name is below the windscreen along with 2 Japanese kill scores. There is a black eagle outlined in white on the fuselage just before the white star in a blue circle insignia. There is a white diagonal narrow fuselage stripe in front of the rudder and a white 86 on the rudder. This artwork was by artist Andy Green and is dated 1994.

On the reverse side of this poster there are black and white photo of Monogram’s Pro Modeler releases that were planned for release in 1995. These are not the actual box arts for those kits, but in most cases are photos of the actual aircrafts. There are 7 of them shown:

Copyright of this poster is 1994 and Revell/Monogram’s street address in Morton Grove, IL is given again. It is said that the black and white photos do not necessarily reflect the actual decal versions included in these model kits shown. Features of Revell/Monogram kits are listed. 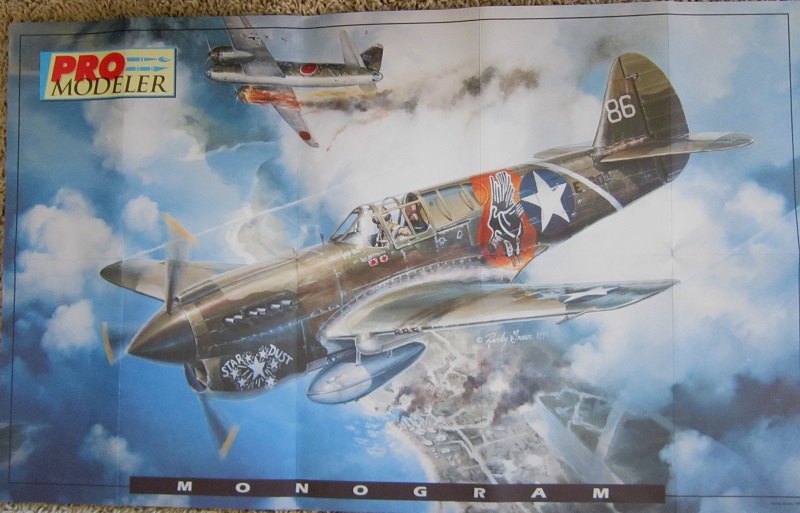 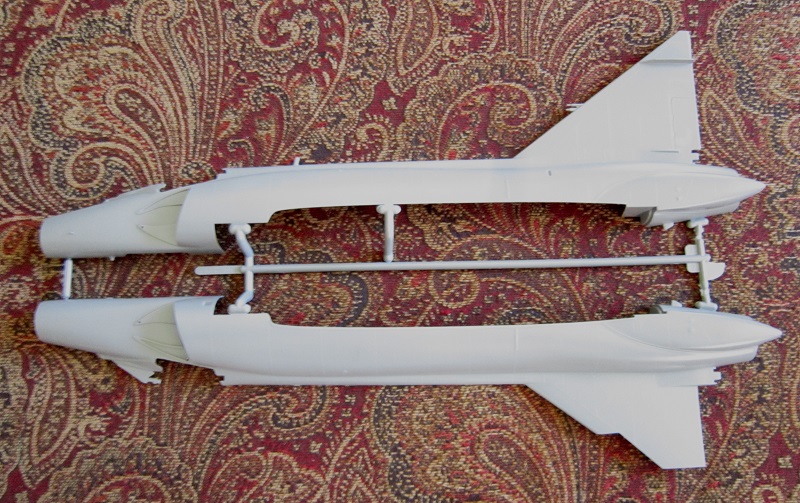 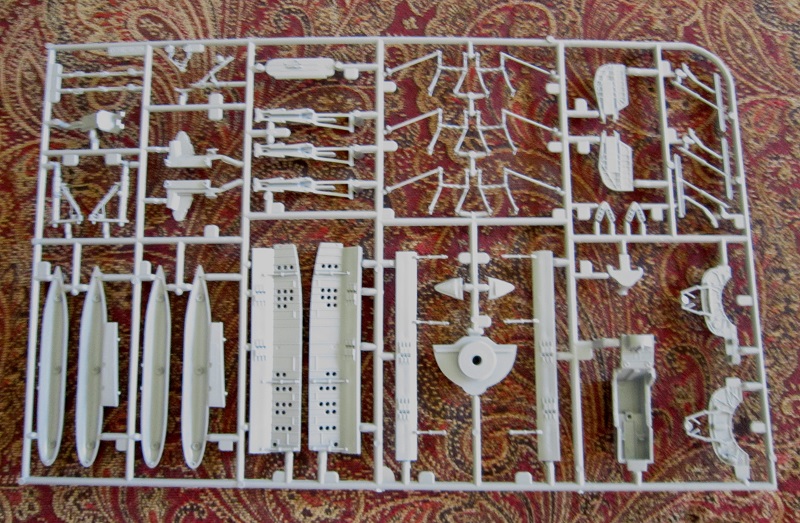 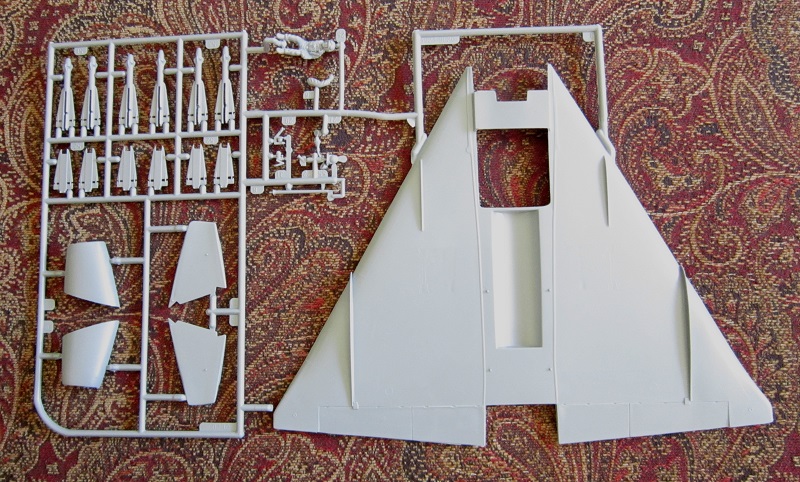 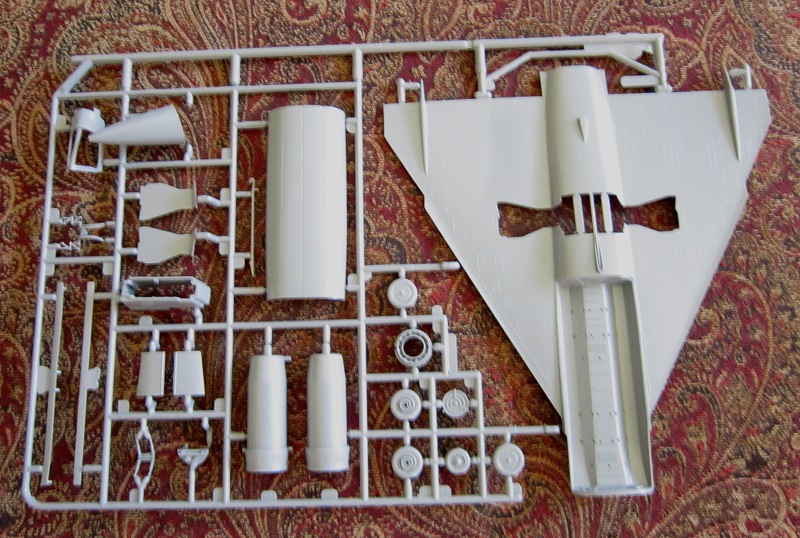 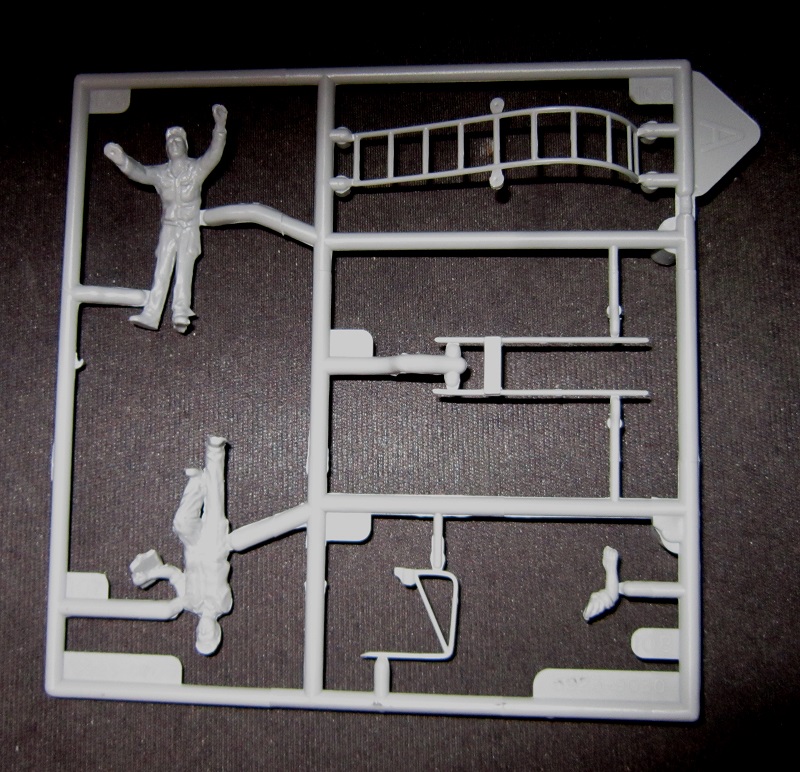 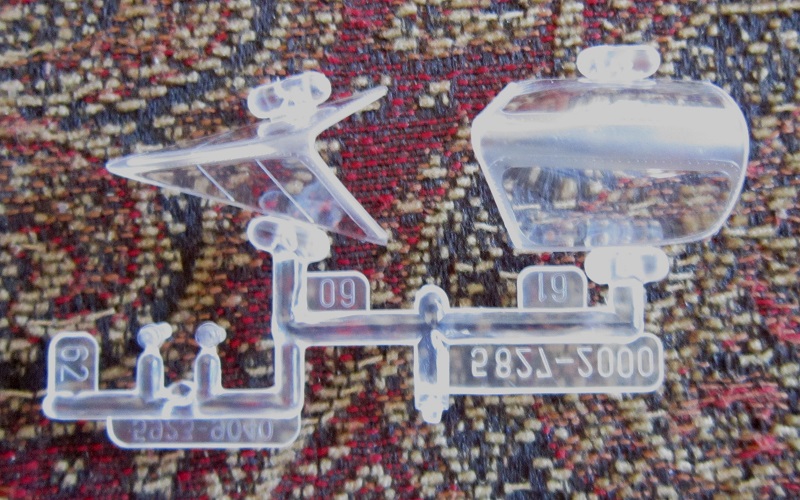 The decal sheet has the markings for the 2 schemes already described above, plus stencil markings. 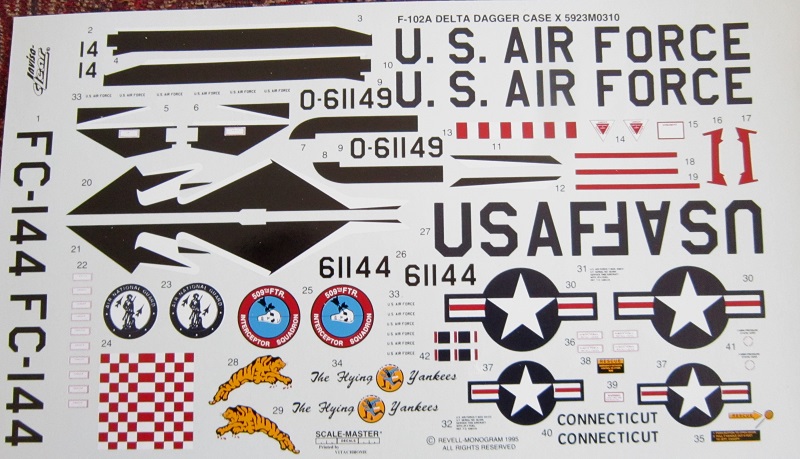 I won this kit in a raffle at a IPMS contest.

I highly recommend it to beginning modelers. With its rather low quantity of parts and the very detailed instructions it should be an easy build. I will probably sell this kit as I am not a big fan of modern aircraft.