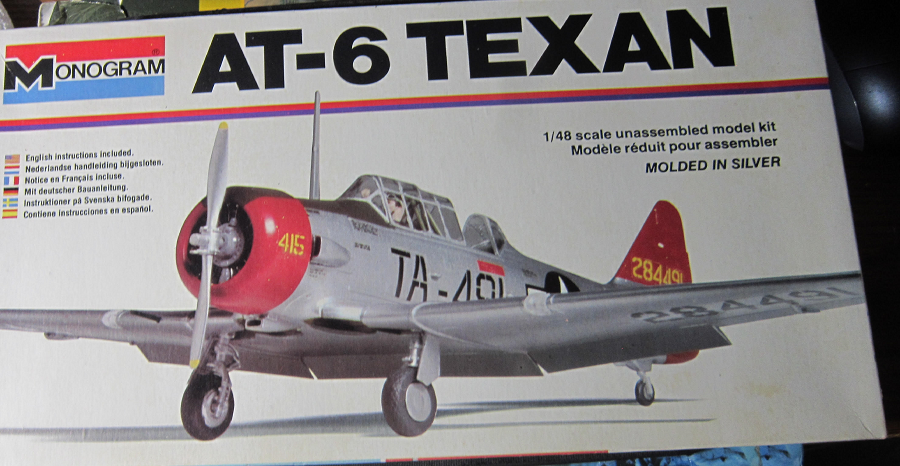 Designed by North American Aviation, the T-6 is known by a variety of designations depending on the model and operating air force. The United States Army Air Corps (USAAC) and USAAF designated it as the AT-6, the United States Navy the SNJ, and British Commonwealth air forces the Harvard, the name by which it is best known outside the US.

Starting in 1948, the new United States Air Force (USAF) designated it the T-6, with the USN following in 1962. It remains a popular warbird aircraft used for airshow demonstrations and static displays. It has also been used many times to simulate various Japanese aircraft, including the Mitsubishi A6M Zero in movies depicting World War II in the Pacific. A total of 15,495 T-6s of all variants were built.

The box art is a color photo of the model made up and posed against an all-white background, similar to how Tamiya does the majority of their box arts too.

It is overall bare-metal with a red cowling and rudder. The cowling has a yellow 415 on it. The fuselage code is black TA-491 before the star. There is a yellow serial no. 284491 on the rudder and repeated in black under one wing.

The box art says there are instructions included in English, Dutch, French, German, Swedish and Spanish.

One side panel has 3 color walk-around type photos of the model made up in the cover art scheme.

​The other side panel has a small color profile photo of the model made up in the cover art scheme, over Monogram's address in Morton Grove, IL and the copyright date 1979. This is followed by the history of the Texan in 5 of the languages.

The kit contains 3 silver-gray parts trees, a clear tree, the decal sheet and instructions. Trees are not cello bagged.

The instructions consist of a single sheet, folded in the center to create 4 pages in 8 1/2" x 11" page format.

Page 1 begins with the history of the Texan in English and READ BEFORE YOU BEGIN instructions, a suggested paint listing and international assembly symbol explanations in the 6 languages.

Page 2 to the top of page 4 give a balance of a total of 17 assembly steps.

The rest of page 4 has painting and marking instructions on it, showing a 4-view of the cover art scheme, which is a Texan BNJ-5 version that is overall bare metal with black U.S. Navy behind the fuselage star and a small black serial no. 90667 followed by SNJ-5 on the  rudder sides.

Trees are not cello bagged, alphabetized or illustrated in the instructions. They do have part number tabs next to the parts on them. 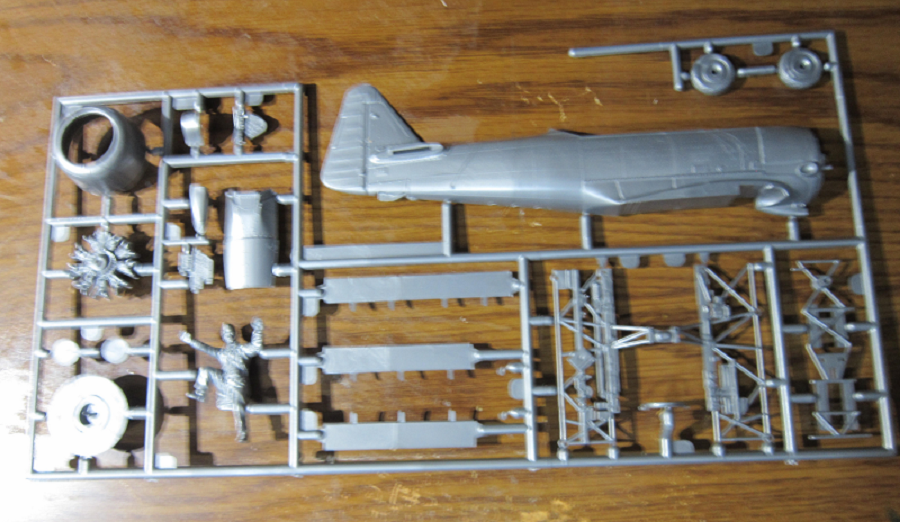 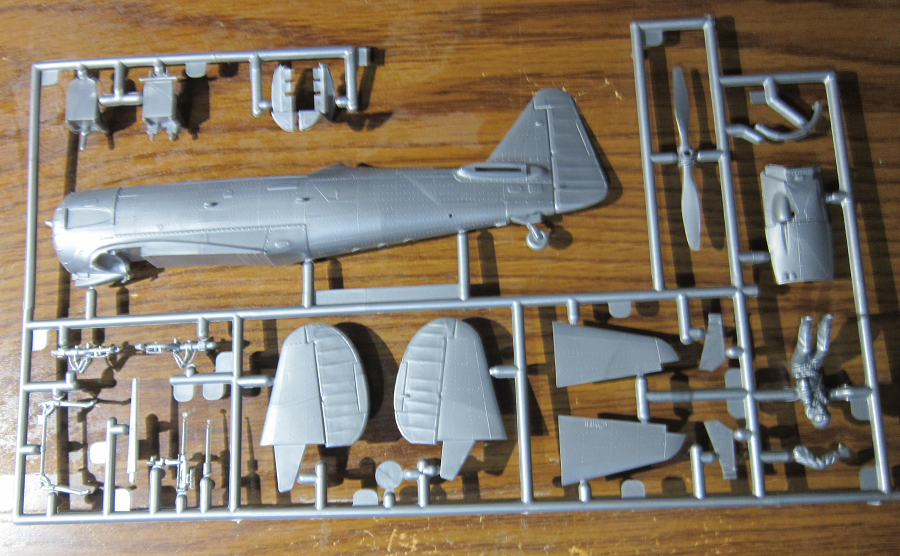 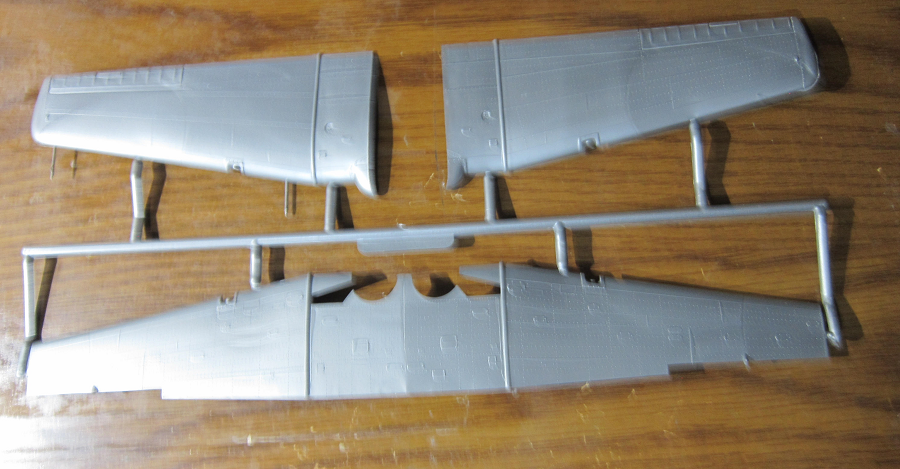 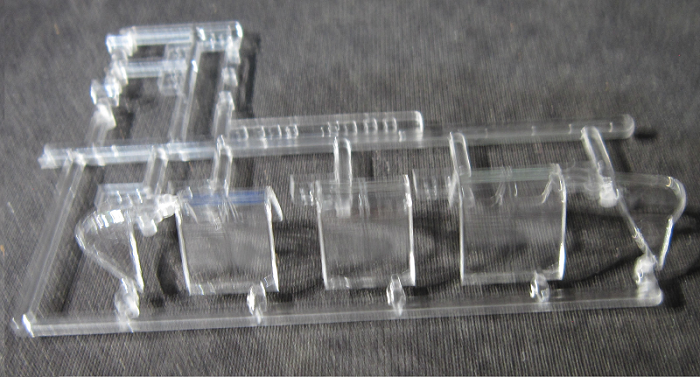 ​The decal sheet completes the kit's contents and has stencil marks included on it. 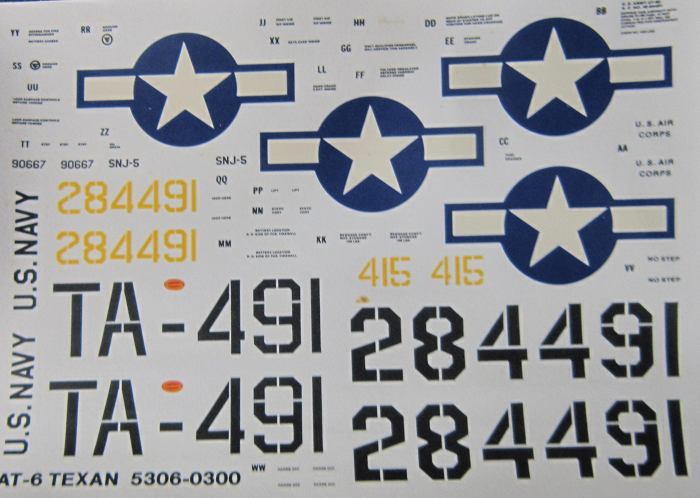