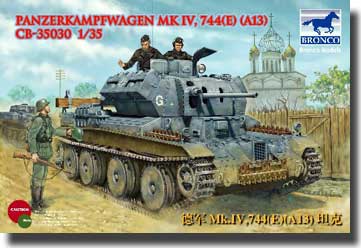 The A-13 Cruiser Tank Mk. IV was the first of a long line of British Cruiser Tanks to use the American Christie suspension, which allowed high cross-country speeds. Some of the first A-13 tanks were sent to France with the British Expeditionary Force (BEF) in 1940 to defend against the German attack. Unfortunately, the tanks were over-run before they got a chance to fight.

Though most tanks were destroyed by their crews, a few A-13’S were captured by the Germans and pressed into service as the Panzerkampfwagen 744(E). The Germans used some of these tanks in Russia, were they were fitted with Pz.Kpfw. II Ausf. D tracks and other equipment. Little information is available about their use, but photographs confirm their use by the Pz.Abt. 100 of the 18th Panzer Division during the Barbarossa drive for Moscow.

The kit comes in a large tray and lid type box. It contains 25 trees of light tan plastic, that hold 597 parts, 3 brass PE frets that hold 125 parts, a length of string (to use for tow cables) and 5 clear parts. A total of 727 parts. The decal sheet and instructions complete the kit’s contents. Parts were not in cello bags and friction between trees knocked several parts loose from them. The box was rather flimsy and my example was rather crushed.

The instructions consist of a staple bound booklet of 16 page in 8 ¼” x 11 ½” format. There are a total of 21 assembly steps. These instructions are printed on slick coated paper.

The last page of the instructions has a 4 view illustration of the only marking option in the kit in full color. It is for the Pz.Abt. (Flamm) 100, 18th Pz. Division, Russia, winter 1941. It is in overall panzer gray with white 2 white skeletal crosses on the back of the turret and the front of the hull. White skeletal crosses are also on each side of the turret. A white letter “G” is on the left side of the front of the turret and low on the center of the rear of the hull next to a white division mark.

In addition to the wheel change there is a unditching beam mounted on the rear and a large load of jerry cans. There is no interior detail provided and there are no crew figures included in the kit.

I recommend this kit to modelers that have had a few other kits of this complexity in the past that they have built. It is not for the novice, nor a weekend project.

I want to sincerely thank Stevens International for this review sample. 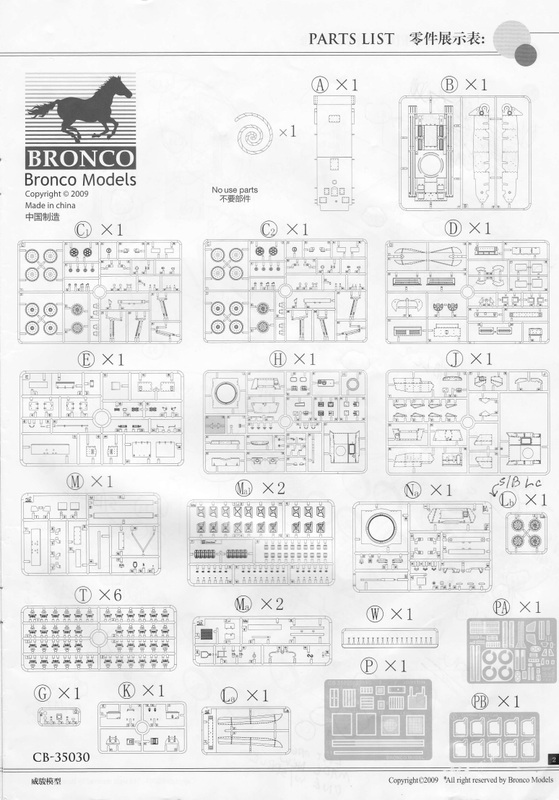