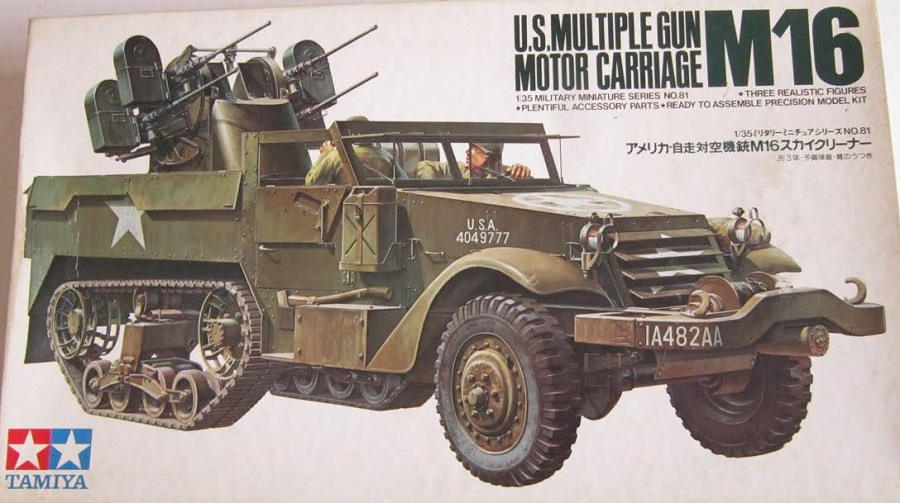 
OUT OF PRODUCTION:
​HISTORY:

The M16 Multiple Gun Motor Carriage, also known as the M16 Half-track, was an American self-propelled anti-aircraft weapon built during World War II. It was equipped with four 0.5 inch (12.7 mm) M2 Browning machine guns in a M45 Quadmount. 2700 were produced by White Motor Company from May 1943 to March 1944, with 568 M13 MGMCs and 109 T10 Half-tracks being converted into M16s as well.

The chassis was derived from the T1E2 chassis, an earlier version of the M13. Based on an M3 Half-track chassis, it replaced the M13 MGMC half-track after early 1944. As aircraft became more advanced, the usefulness of the M16 was reduced. In the Korean War, it was relegated primarily to the ground-support role, being put out of service in the U.S. Army in 1951.

Nicknamed the "Meat Chopper" the M16 was famous for downing low-flying aircraft, making it extremely popular with soldiers. It was used by the United States Army, the British Commonwealth, and South Korea. A similar version of the M16, the M17, which was based on the M5 Half-track and exported via Lend-Lease to the Soviet Union.

THE KIT:
Tamiya is an older prolific model company based in Japan. They make all manner of model subjects in the popular scales.

The box art shows the M16 against one of Tamiya’s usual all-white backgrounds used on all their box arts.

It is overall olive-drab with a white star on it’s sides and a circled white star atop the engine hood. The white serial number U.S.A. over 4049777 is on the hood sides and a white IA482AA is on the left front bumper. Two crew figures are shown in the cab. However, the box art says there are 3 figures included in the kit.

One side panel has a small color repeat of the box art, followed by what I think is the history of the M16 in Japanese and further followed by Tamiya’s address in Japan.

This kit contains 4 dark-green trees of parts, a die-cut clear sheet, a tree of black vinyl parts and the decal sheet in 3 stapled-shut cello bags.

The instructions complete the kits contents. It consists of a single sheet that accordion-folds out into 8 pages in 8 ½” x 11” page format.

Page 1 of the instructions begins with a black and white repeat of the box art, followed by the history of the M16 in Japanese only.

Page 2 has the first 2 assembly steps accompanied by 3 black and white photos of the model made up.

Page 3 through to the top of page 7 give a balance of a grand total of 18 assembly steps.

The bottom of page 7 has a 4-view of the box art scheme. This further shows a white number B242 on the right front bumper and IA432AA sand B242 on the rear bumpers. MAXIMUM SPEED 20 MPH and CAUTION LEFT HAND DRIVE is in white on a storage box on the right rear.

No unit is mentioned I think here. The text is all in Japanese so it’s hard to tell. 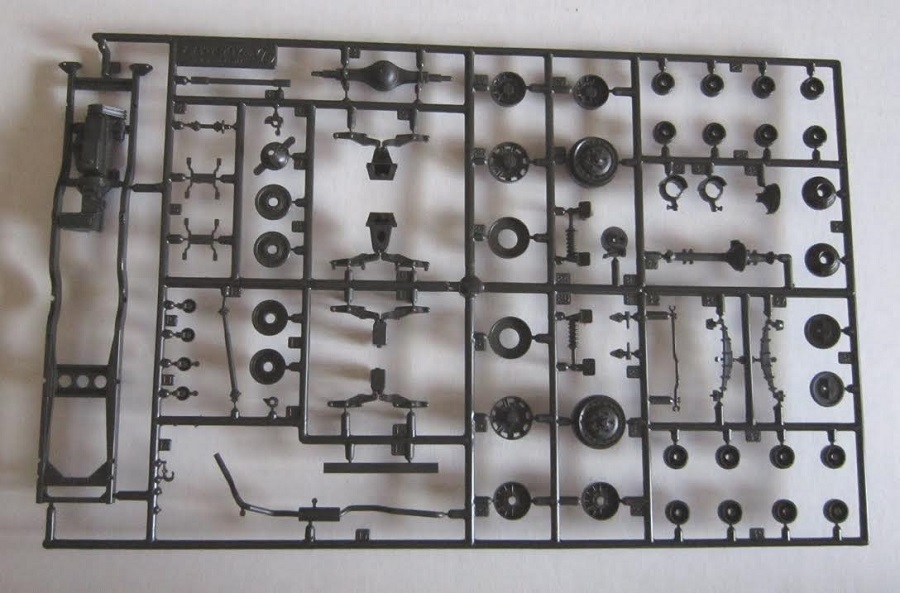 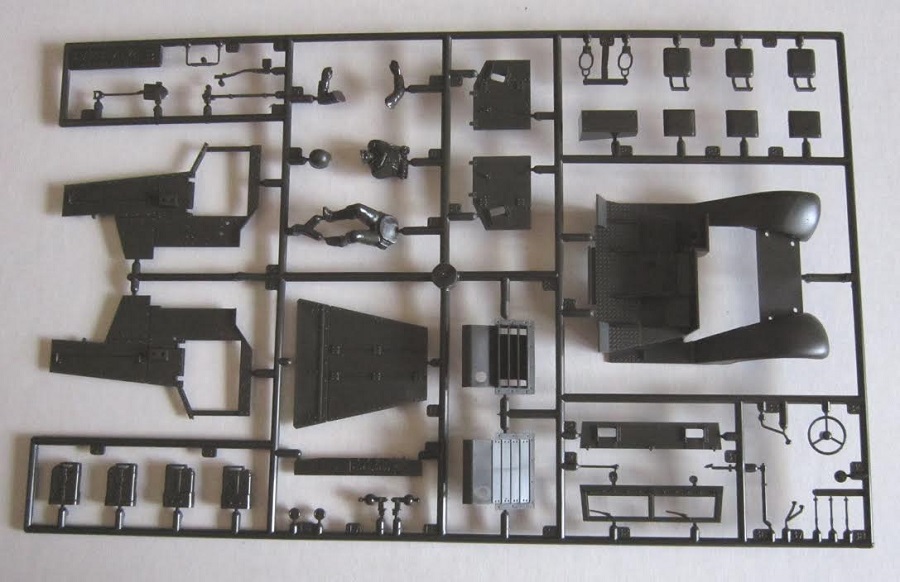 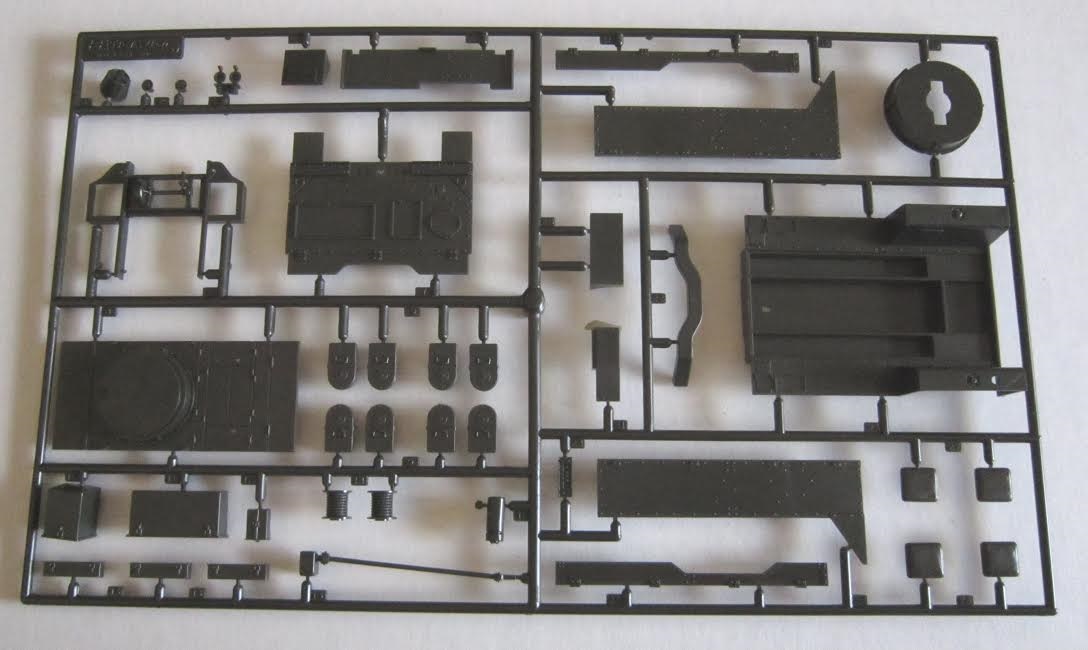 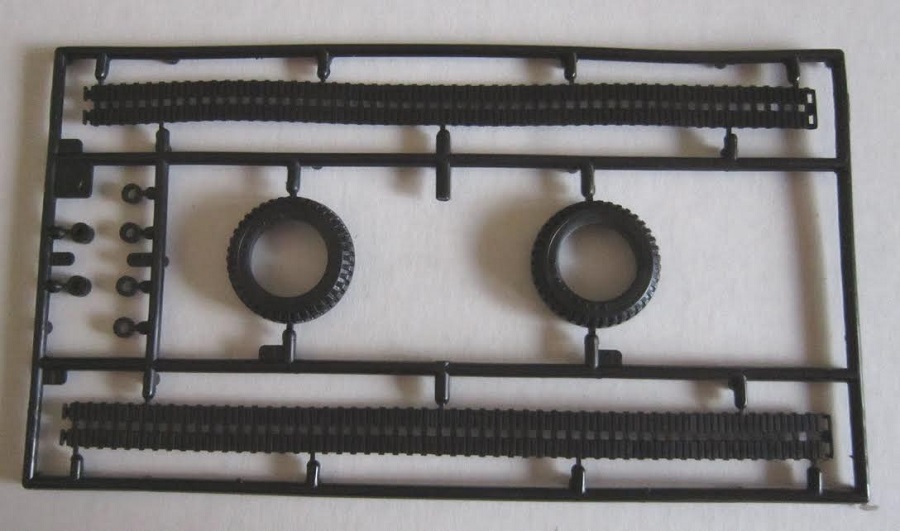 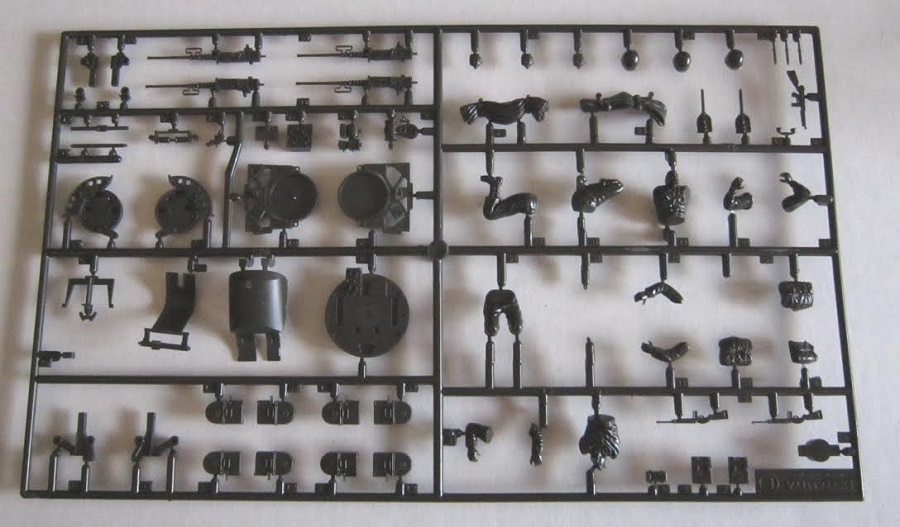 The thin sheet of clear plastic has 2 die cut windshield panes on it.
The decal sheet completes the kits contents. 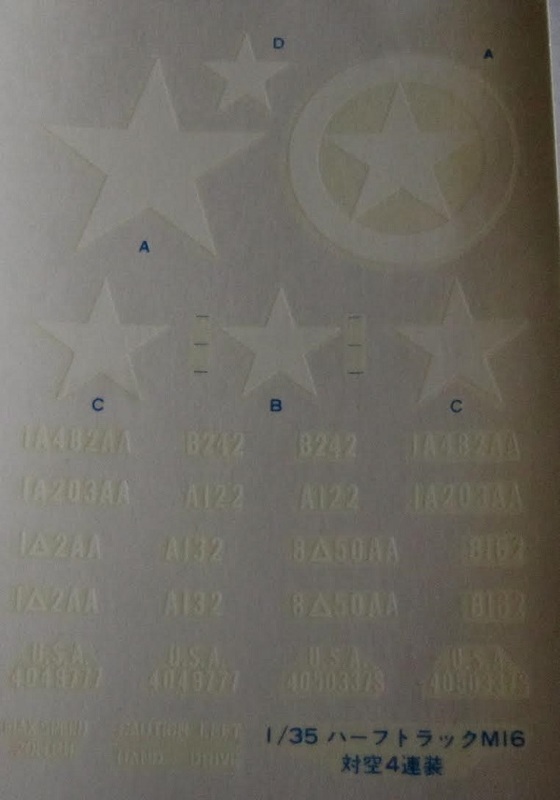 ​I had a modeling friend that died of cancer years ago. He willed me all his AFV kits and his after-market AFV accessories company Armor Research. Amongst this stuff was a PE set by Fotocut that does the sprockets for the M16 and other derivatives of this half-track.

Fotocut  is based in Erieville, PA and they have a web site. There is no set number on this set.

The parts are brass and already separate pieces they are attached to a rubber sticky sheet that you peel them off of. However, the assembly looks very daunting. Especially the spacers that go between the wheel layers. They are very tiny. 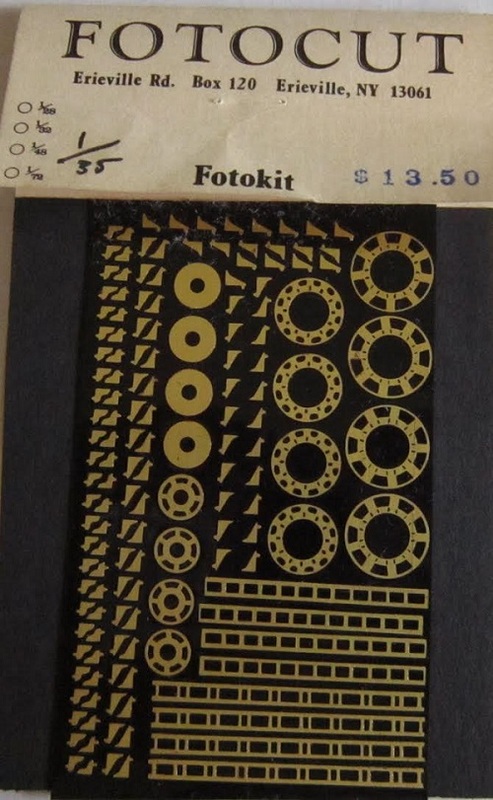 This is a very nice older kit with some very nice  detail for a kit that is one year short of being 40 years old. Recommended.