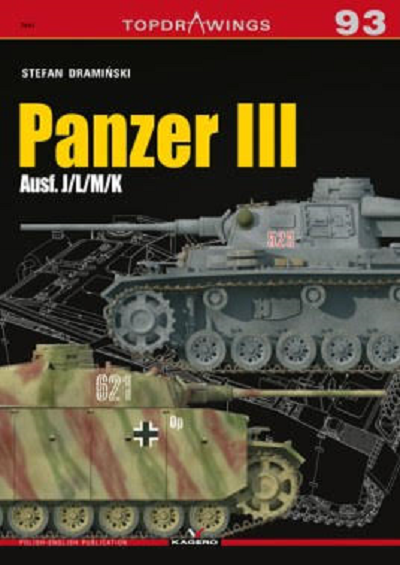 The Pz.Kpfw III (Panzerkampfwagen III) is a German  tank designed by Daimler-Benz AG. The first tests of the vehicle took place in 1936. The construction o the Pz.Kpfw. III consisted of four main modules: the turret, the front of the hull, the rear of the hull with the engine compartment cover and the lower hull.

Early Pz.Kpfw. III models were prototype vehicles and were not suitable for mass production on a large scale. They were powered by  Maybach HL 108 TR petrol engines with 250 hp. They were armed with 37mm guns and three MG-34 machine guns (two in the turret and one in the hull).

In 1938, the Daimler-Benz AG plant began producing the Ausf. E version. It differed from its predecessors mainly with the new suspension manufactured by Porsche. The Pz.Kpfw. III Ausf. E was equipped with a 300 hp Maybach HL 120 TR engine.

Due to the fact that 37mm guns were not effective in fight against Allied tanks, from the year 1940, tanks with 50mm cannons (both short and long-barreled) were produced.

From 1939, the production of the new version of the Panzer III – Ausf. F – which externally differed from Ausf. E in air intakes at the top of the hull. The first batch of tanks was equipped with a 37mm gun, but in 1942 they were rebuilt with 50mm guns.

In April 1940, the Pz.Kpfw. III Ausf. G entered service. They had 21-30mm thick armour. The turret was also modified by equipping a new ventilation fan and adding a hole for the signal pistol.

In June 1942, production of the Panzer III Ausf. L began.It had reinforced armour at the front of the turret and additional yoke cover and upper hull armour with 20mm thick plates. An improved recoil mechanism had also been introduced.

Evacuation hatches on the sides of the tower were removed. In October 1942, the Ausf. M version appeared. It was able to cross water obstacles to a depth of 1.3m. In addition, 90mm NbK grenade launchers were mounted at the back of the hull.

This book is in both English and Polish.

The cover art shows color side profiles of two Panzer III’s posed against an all black background that has a white line drawing of the engine deck of a Panzer III.

The Panzer III color profile at the top is overall Panzer-grey with a white outlined 525 on the sides of it’s turret. It is a Ausf. J version of II Battalion, 24th Panzer Regiment, 24th Panzer Division, Stalingrad area, summer 1942.

There are two large loose sheets inserted in the books with more line drawings on them.

The face side of the first sheet has a 1/35th scale 5-view line drawing of a Ausf. L version on it,

This is one neat book on the Pz.Kpfw. III. It will be of great interest to modelers planning to model of a version of this tank in any of the 3 scales featured in this book. It will also interest military historians,.

I want to sincerely thank Casemate Publishers, the North American distributor of Kagero books for this review sample. All Kagero titles can be viewed on Casemate’s website at:
www.casematepublishers.com
​Highly recommended.