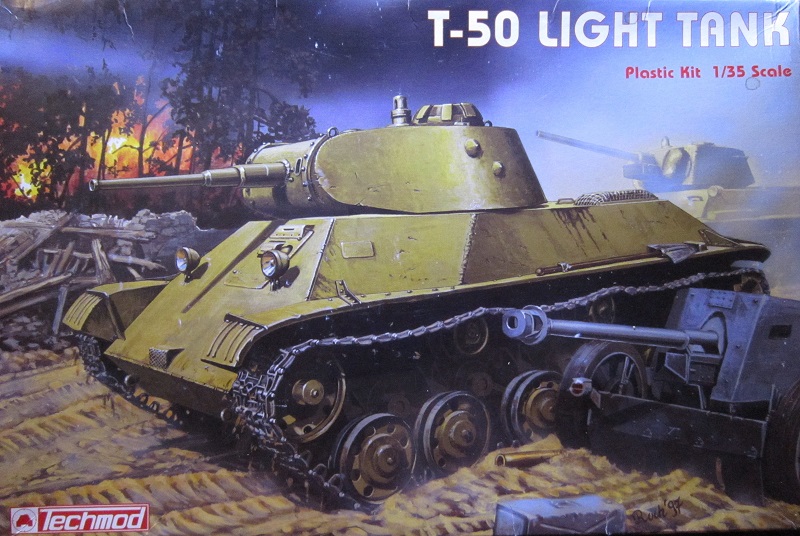 The T-50 light infantry tank was built by the Soviet Union at the beginning of WWII. The design for this vehicle had some advanced features, but was complicated and expensive, and only a short production run of 69 tanks was completed.

The T-50 was a light tank developed on the eve of WWII for the Red army. The experience of the Spanish Civil War led to an effort to upgrade or replace the large Soviet tank fleet. Prior to 1939, most tanks in the Red Army service were improved versions of foreign designs. For example, the most numerous tank, the T-26 light infantry tank, was a copy of the British Vickers 6-ton tank with a Soviet-designed turret and 45 mm gun. However, just prior to and during the war, the USSR developed new light, medium and heavy tanks of wholly indigenous design. The T-50 light tank was intended to replace the T-26 infantry tank. In prewar planning, the T-50 was intended to become the most numerous Soviet tank, operating alongside the BT fast tank.

Development of the T-50 started as the SP project (Soprovzhdeniya Pekhoty, “Infanty Support”) in 1939 at the OKMO design bureau in the S.M. Kirov Factory Number 185 in Leningrad, under the direction of S. Ginzburg and L. Troyanov. Initial prototypes, called T-126 and T-127, were not much improved over the T-46-5 project which had been abandoned earlier that year. However, the heavier T-126 was selected for further development. The design bureau was gutted during the Great Purge, and was unable to continue the project, so it was transferred to the K. E. Voroshilov Factory Number 174 in May 1940. Troyanov completed the T-50 design in January 1941 and production was authorized, but due to technical problems, it was unable to proceed.

In the meantime, a replacement for the BT fast tanks was developed and built at the KhPZ Factory in the Ukraine, which exceeded its original program. The result was the very capable and economical T-34 medium tank.

After the German invasion, Operation Barbarossa in June, tank factories were ordered to be transferred to the Urals. Part of OKMO was moved to Omsk after September, and production was finally begunl. The T-50 was an excellent design, but still suffered from technical problems, and at that time was found to be as expensive to produce as the more capable T-34. Much simpler T-60 light tanks were already being mass-produced. A total of 69 T-50 tanks were built (only 48 of them armed) before production ended in January 1942.

Some further infantry tank design work on a prototype, called the T-45, continued at Factory Number 174 and the Kirovskiy Factory Number 100. However, faced with the need to accelerate T-34 production, and due to a lack of interest from troops in the field, the Soviet infantry tank concept was abandoned.

The T-50 was an advanced design for its time, with torsion-bar suspension, diesel engine (in common with all the new Soviet tanks) and well-sloped, all-welded armor. An excellent feature was the three-man turret with commander’s cupola, which would not appear on other Soviet tanks until 1942. Most Soviet tanks of the 1939-1943 era had either one-man or two-man turrets. Additionally, all T-50’s had radios, a feature only found on the commander’s vehicle in earlier models.

However, the T-50 had several weaknesses; to begin with, like many Soviet tanks, it was very cramped inside. The main problems, however, were related to the new V-4 engine developed specifically for this tank, unlike other Soviet AFV’s, which used standard truck engines. The T-60 and T-70 light tanks and the SU-76 self-propelled gun used standard GAZ truck engines. Specialized tank engines, more expensive to produce, were reserved for higher-performance AFV’s. The very mobile BT-8 fast tank, the T-34 medium tank, KV-1, the IS-2 heavy tanks, and their derivatives all used variants of the same standard 12-cylinder model V-2 diesel engine. The V-4 engine was extremely unreliable, and the design flaws could not be worked out. The engine’s low reliability and high cost contributed to the demise of the T-50.

Techmod was a model company based in Poland. I don’t know if they still exist or not.

This kit came in a shrink-wrapped tray and lid type box. The box art shows a T-50 moving down a dirt road leading a T-34 behind it. On the side of the road is an abandoned German anti-tank gun on one side and a pile of rubble on the other side. In the distance is a forest on fire. The T-50 is in overall Soviet green with no markings shown.

One side panel of the box repeats the box art smaller and in color, followed by the statement that the model is suitable for ages 6 to adult, it contains decals and instructions for assembly and paints and plastic adhesive are not included, in Polish, English and German. Techmod’s street address in Poland is provided here also.

The other side panel just repeats the box art smaller and in color again.

This kit contained 5 chalk white trees of parts and the instructions. No decal sheet is provided or any clear parts or crew figures.

The instructions consist of a single sheet folded in the center to form 4 pages in 5 ¾” x 8 ¼” page format.

Page 1 of the instructions begins with a black and white repeat of the box art. This is followed by the history of the T-50 in Polish and English and ATTENTION instructions in the two languages. Techmod’s street address in Poland and their fax no. are at the bottom of the page.

Across pages 2 and 3 are 10 exploded drawings to use for assembly. These are numbered with Roman numerals. Although the drivers hatch door and the turret top hatch doors are separate, there is no interior detail inside.

Page 4 begins with decal application instructions. Which is silly as there are no decals provided in the kit. This is followed by a single side view of the T-34 in overall army green. The tank is one with the Red Army in 1941. No unit is mentioned. It’s color and the gun metal color for the tracks are called out in Humbrol brand hobby paints. The copyright of 1997 for this kit appears on this page and the parts trees illustrations are at the bottom half of the page. 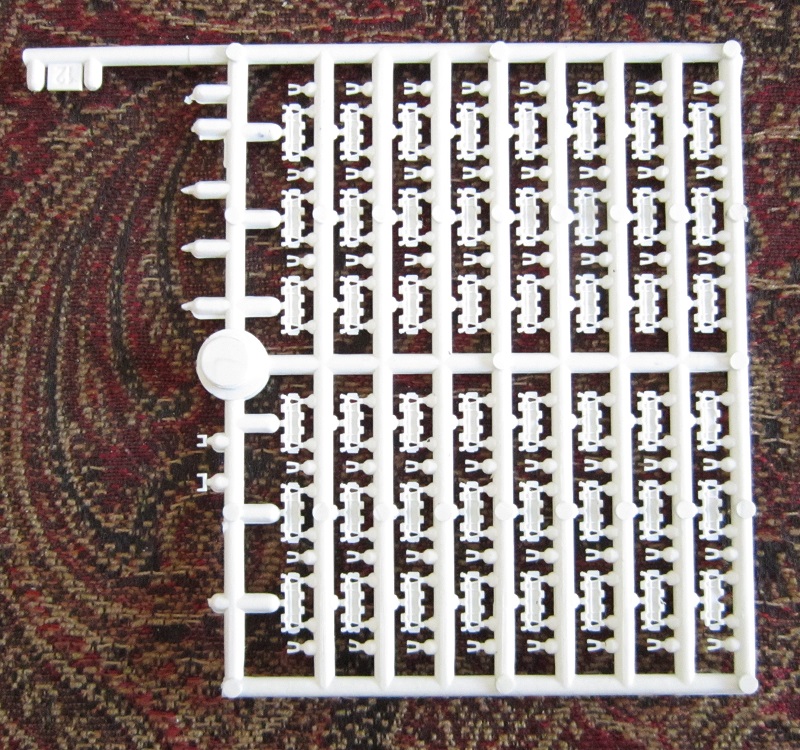 This kit went together so far in just a few hours. It was a very easy and quick build. Only the treads remain for me to add now and then paint the whole shebang the usual Russian green. 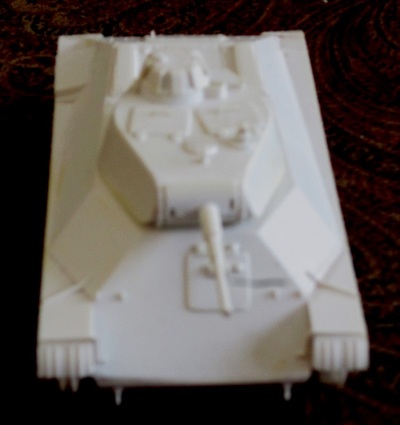 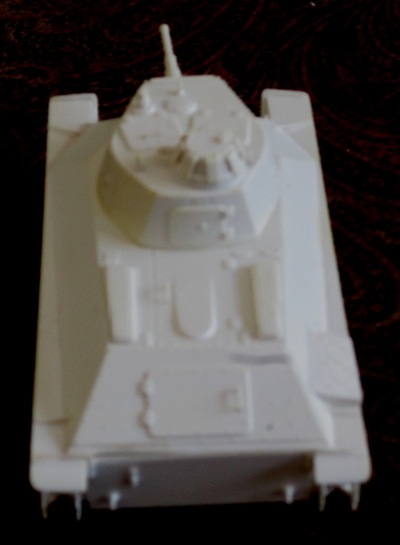 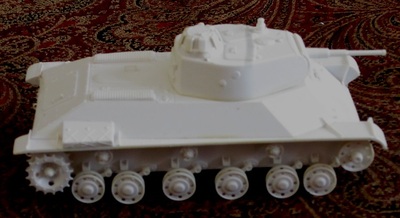 I have noticed in my books showing Soviet tanks in WWII that a lot of times they were totally unmarked at times. Patriotic slogans appeared and occasionally a number on the sides of the turret. So the lack of a decal sheet is no real biggy I guess.

I highly recommend this kit to modelers of all building skills.

Kit was courtesy of my wallet years ago and I think it is the ONLY Techmod brand kit I own.