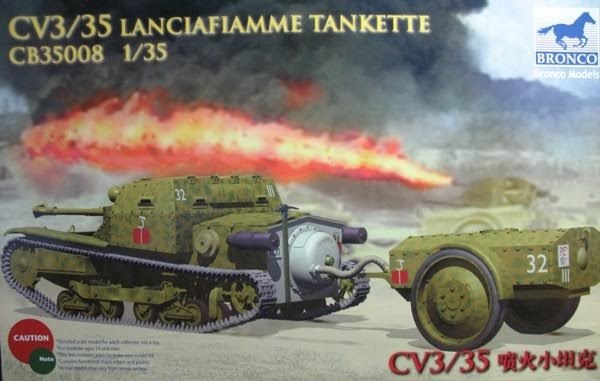 The L3/35 or Carro Veloce CV-35 was an Italian tankette that saw combat before and during World War II. Although designated a light tank by the Italian Army, its turret less configuration, weight and firepower make it closer to contemporary tankettes. It was the most numerous Italian armored fighting vehicle and saw service almost everywhere the Italians fought in World War II but proved inadequate for modern warfare having too thin armor and weak armament of only machine guns.

Development of the "L3 Lf" flamethower (lancia fiamme) flame tank began in 1935. The flamethrower nozzle replaced one of the machine guns, and the flame fuel was carried in an armored 500 liter (133 gallons) fuel trailer towed by the vehicle. Later versions carried another 60 liters of fuel in a box-shaped tank mounted above the L3's engine compartment. The vehicle weighed 5 metric tons.

Bronco is a prolific model company based in Hong Kong, China.

This kit comes in a shrink-wrapped tray and lid type box. The box is blousy and a good 4" too long for what's in it.

The box art shows a CV3/35 in desert terrain . It is pulling a 2-wheeled fuel trailer. Both vehicles are in a base of dark sand with gray-green streaks. It has a red rectangle with a vertical white bar in the center underneath a white number 3 with a small white number 0 behind it. There is a white number 32 on the left rear side of the fighing compartment and a roman numeral III on the right. A white license place is on the left lower left side of the rear with black lettering RE 1520.

A second CV3/35 is behind it and using it's flamethrower.


These markings appear again on the flame fuel trailer. The red rectangle with white lettering over it is on the sides in front of the wheels. The white number 32 is behind the wheels.  The license plate is on the left rear above the white roman numeral III.

One side panel repeats the box art subject as a full color 4-view, followed by a warning that the kit is not suitable for kids under 3 due to small sharp parts that they may accidentally swallow.

The other side panel says there is decals for Italy above a color illustration of the flag of Italy. Next is illustrations of the brass PE fret and the decal sheet in the kit. It says the kit is intended for modelers 14 and over in 10 languages including English. This is followed by Bronco's street address, e-mail address and web site address in Hong Kong.
​WHAT'S IN THE BOX:

It consists of a staple-bound booklet printed on slick-coated paper. It is 16 pages long in 8 1/4" x 11" page format.

Page 1 begins with a color repeat of the box art, followed by the history of the CV3/35 in English, German and Chinese.

Page 3 has the parts trees illustrations. Some parts are shaded out as being excess and not needed to complete the model.

Page 4 through 14 give a grand total of 22 assembly steps.

Page 16 has a full color 5-view of another CV3/35. It is overall base of gray-green with red-brown spots. It has two yellow leaning vertical rectangles on the sides of the hull and in front of the wheels on the flame fuel trailer. It is a vehicle on military exercise in Rome, May 1937. 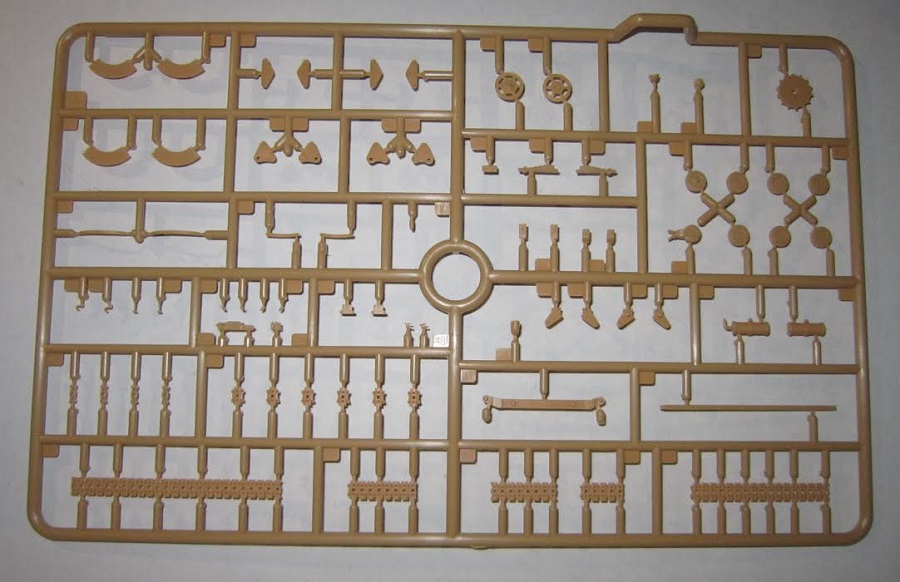 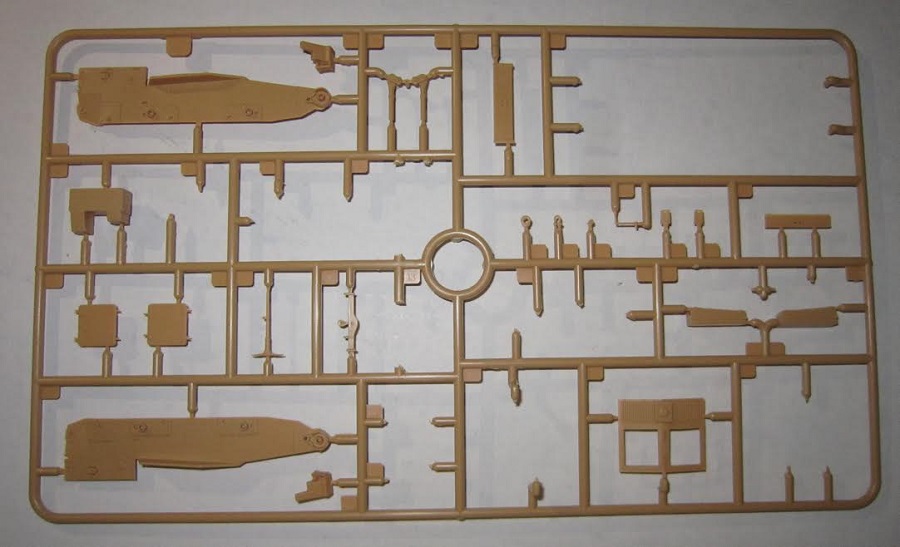 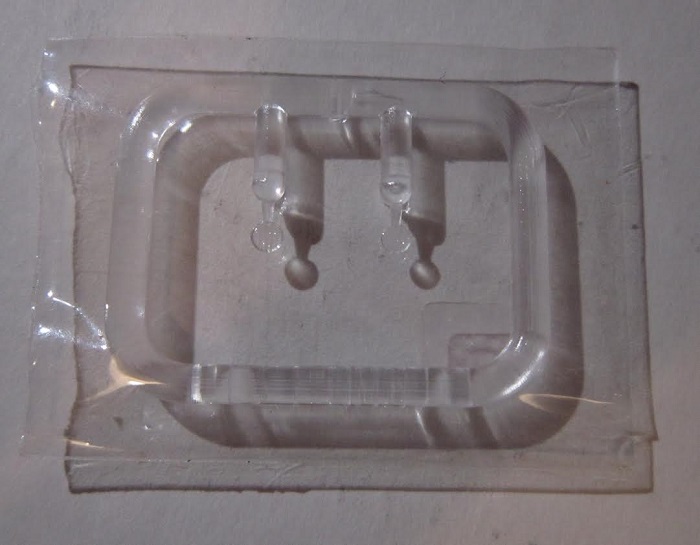 ​Tan letter D parts tree holds a lot of small parts that I cannot readily identify and name. Sorry. There are 69 parts on this tree. 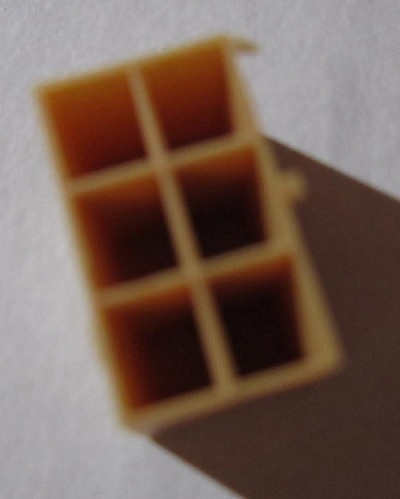 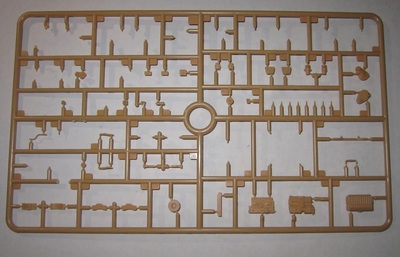 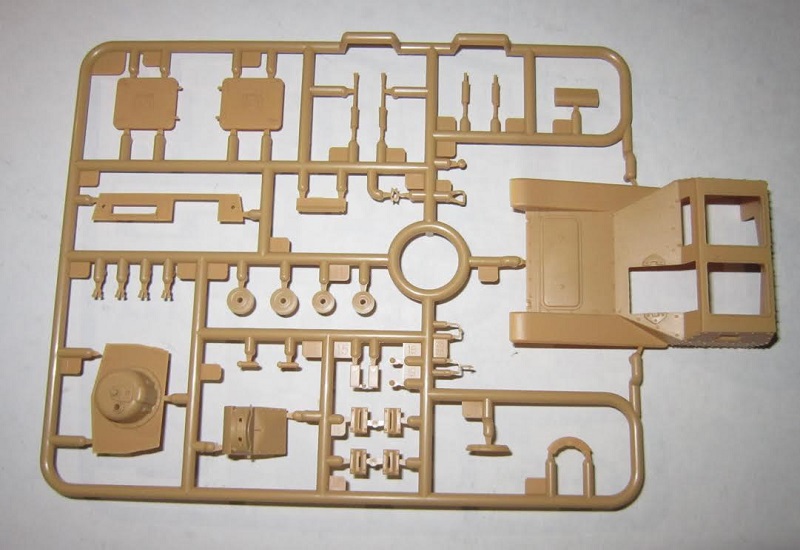 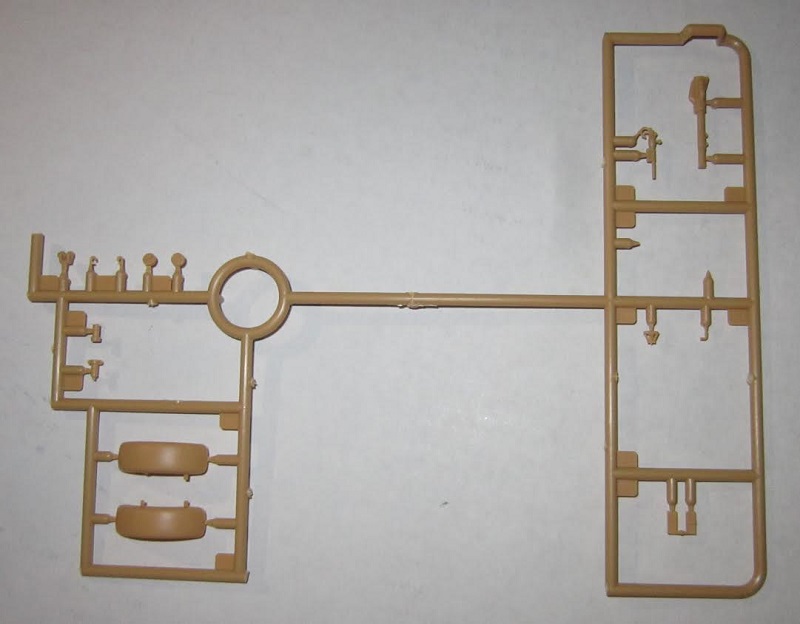 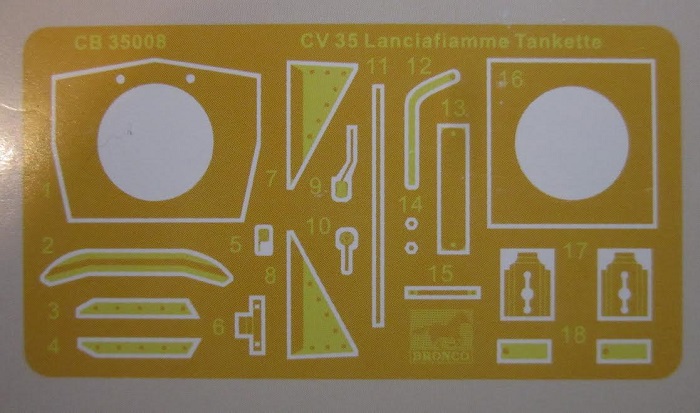 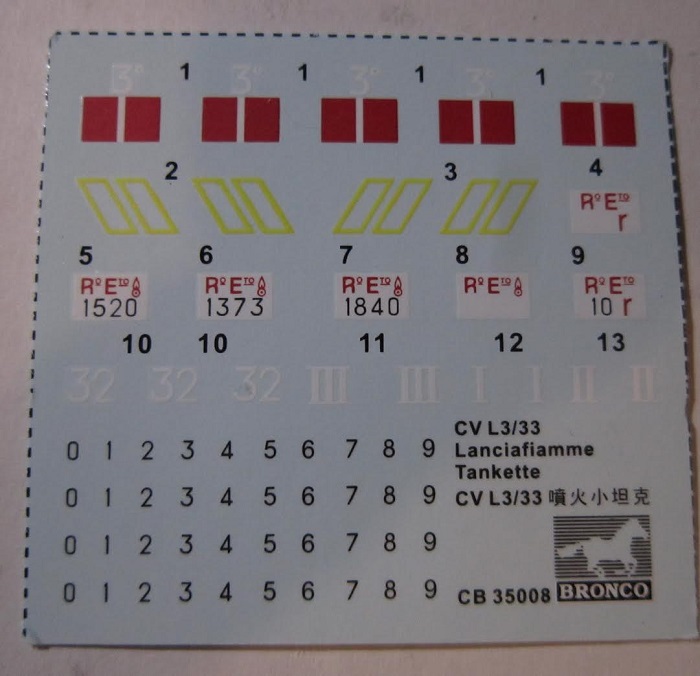 I have started the kit and I have assembled the crew compartment ,transmission and fuel tank. 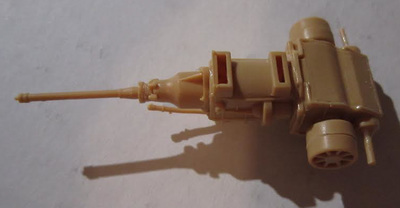 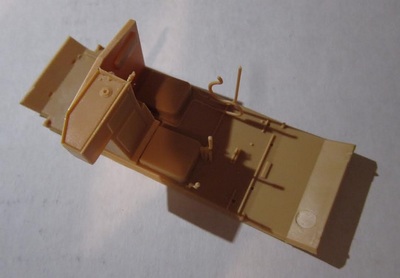 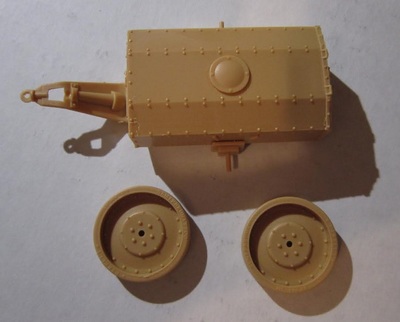 ​This kit has very nice detail. Some of it is really very  tiny. There are a lot of parts and the assembly is complex.
​ I only recommend it to modelers of advanced skills.