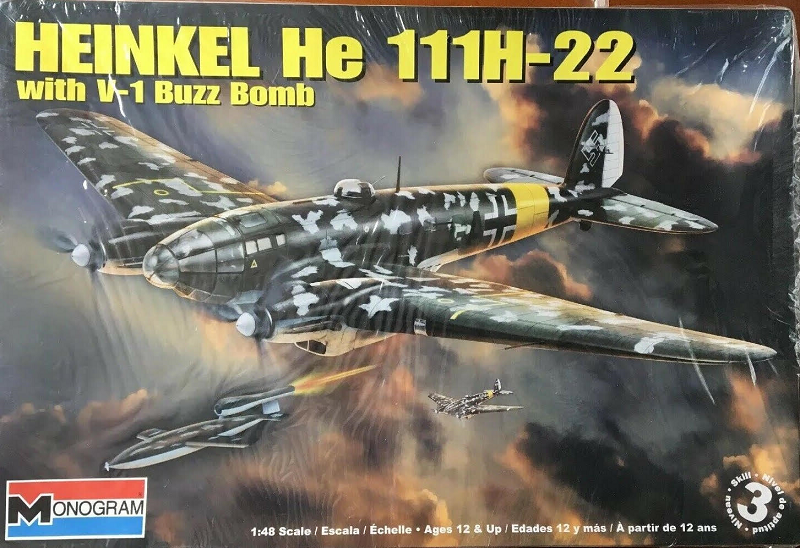 Kit not. 5926
By Ray Mehlberger
Out of production

When it entered service, the Heinkel He-111 was one of the best medium bombers in the world.

Having originally been demonstrated as a civilian passenger aircraft, it was obvious that its design was actually that of a high-performance military aircraft, and its development was almost exclusively for military use.

Early versions of the He-111 featured a conventional stepped cockpit, but efforts to streamline the aircraft resulted in the distinctive offset bullet-shaped nose that made the silhouette of the He-111 unique in the skies over Europe throughout WWII.

During its operational service, the He-111 was produced in a considerable number of variants, and it was used to perform a wide variety of missions.
Although it is primarily known for its service as a bomber, especially during the Battle of Britain, it was also used in the transport, reconnaissance, anti-shipping, glider tug, and pathfinder roles.

Some He-111's were even fitted with cable cutters that spanned across the entire aircraft from wing tip to wing tip. These were used to cut the cables of barrage balloons which inhibited low-level air attacks.

But among the most unusual versions of the He-111 was that of missile carrier. Fore-shadowing the use of today's air-launched cruise missiles, He-111's were modified to carry several types of missiles.

The first missile to be tested with the aircraft was the Henschel Hs-293A. However, these were never used operationally.

But begining in 1942, tests at Peenamunde indicated that the Fiesler Fi-103 missile could be air-launched from the He-111H. This missile, better known as the V-1 Buzz Bomb, was already being used successfully from ground launchers.

Several He-111H-21 bombers were converted on the production line to the He-111H-22 missile-carrying variant.Other existing He-111H-16s and H-20s were also modified to launch the V-1.

III Gruppe of Kampfgeschwader 3 (III/KG 3) began operations with the He-111H-22s  on July 9, 1944, in Operation Rumpelkammer. They launched scores of V-1's against London, Southhampton, and other cities.

Tactics for employing the V-1's began with a low-level approach at night. The He-111 would climb to 1,500 feet, launch its missile, then quickly dive back to low level for its escape.

In order to make the aircraft less visible during the night attacks, exhaust hiders were placed over the engine exhaust ports.

This Pro-Modeler kit of the He-111H-22 missile carrier comes complete with the missile and its attachment pylon under the left wing root. Decals are provided for two He-111H-22 aircraft. One of the markings of III./KG 3 and the sefond for 1./KG 53.

Revell-Monogram is an old prolific model company that was based in Morton Grove, IL when this kit was released. They manufacture all manner of model subjects in the popular scales.

The box art shows two He-111H-22's, flying above the clouds at night through search light beams.

The nearest one has yellow spinner tips. It has fuselage code of small black A1 + large green G black A.

The second He-111H-22 only shows a partial fuselage code of + black B outlined in white.

Neither aircraft display a swastika on their rudders. Nor is this marking in the the instruction illustrations or on the decal sheet. This is to keep the kit politically correct in countries where it is sold that have outlawed showing the swastika. So, an after-market sheet of swastikas will have to be obtained.

This is followed by features of the kit: Plastic model can be painted to match photos on the box. Paint and cement not included, but required for assembly. Length of completed model is 13 5/8" and the wingspan 18 1/4". Kit contains 125 pieces. Pictorial instructions in English. For ages 12 to adult. This is all in English and French.

Copyright of the kit is given as 1995, Revell-Monogram said as being in Morton Grove, IL then and kit was made in the USA.

​The other side panel has 2 more color photos showing the top of the model made up in the 2 greens splinter pattern. One time with these colors alone and the second time with the grey-glue splotches.

This is followed by a one-paragraph history of the aircraft in English and French.

Only the clear parts are cello bagged.

Page 1 begins with a black and white photo of the model made up showing it from above, with just the 2 green splinter pattern on it. This is over the history of the He-111H-22 in English, Revell-Monogram being in Morton Grove, IL, the copyright of 1995 and kit made in the USA.

Page 2 begins with READ THIS BEFORE  YOU BEGIN instructions,
international assembly symbol explanations, a suggested paint color listing, a 1-800 phone number to use to call with any kit problems encountered and the address to get the Federal Paint numbers in Washington, DC, in 4 languages, including English.

Page 3 through 17 show 15 assembly steps. However, I count a total of 36 steps. These are accompanied by a lot of text to walk modelers through the builds.

Step 1 is the assembly and painting guide for the 3 figures. A seated pilot, a prone bombardier and a standing officer.

There are 11 black and white photos, taken of a restored He-111 in a museum. Shown are its cockpit interior, tail wheel, rudder balance, right horizontal stabilizer and elevator, and two trim tabs on the elevators, main landing gear, oil cooler on top of the engines, stencil markings on restored V-1 in a museum, Pitot tube and light on the He-111.

Page 18 is a painting and marking guide showing two left and right profiles of the He-111H-22.

The first one is the box art scheme (already described above). However, it shows the undercarriage to be dark-black-grey (RLM 66) and not the light blue-grey (RLM 76) shown on the box art.

It was with Gerschwaderstab /KG 53 "Legion Condor" Wing Staff Flight of KG 53.

The second 2-view is in the splinter pattern of 2 greens over a dark black-grey under-carriage. It has red spinner tips and a black fuselage code of 5K + RS.

Page 19 has top view of the III/KG 3 version showing it's top. One corner of the page has a 3-view of the V-1 showing decal placements. There are many stencils on this missile.

Page 20 has a top and bottom view of the patterns for the He-111H-22 with splotches over the splinter pattern and its overall black grey under-carriage.

One corner of the page has decal application instructions and another corner has 2 top and bottom illustrations of the V-1 showing 2 paint patterns: one is black green (RLM 70) mottled on light blue-grey (RLM 76). V1 was with KG 53 as serial no. 257874.

The parts trees are not alphabetized or illustrated in the instructions. They do have part number tabs next to the parts on the trees, however. This means a constant search of the trees to get the right parts for each assembly. Tedious!! Bad move Revell-Monogram !! 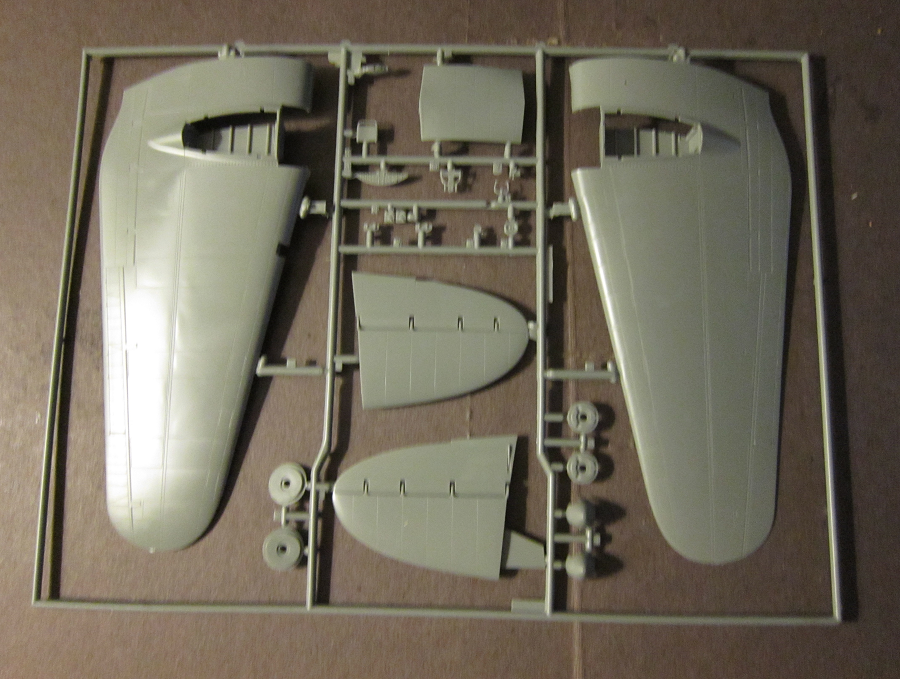 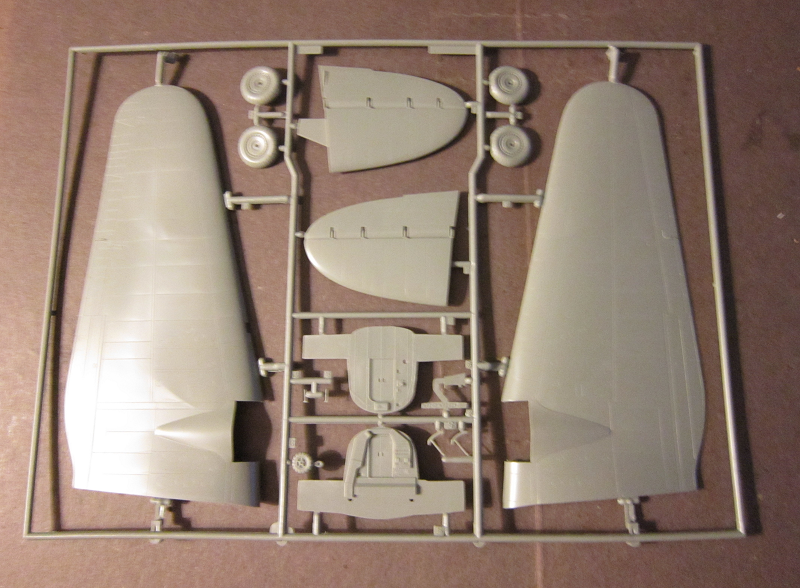 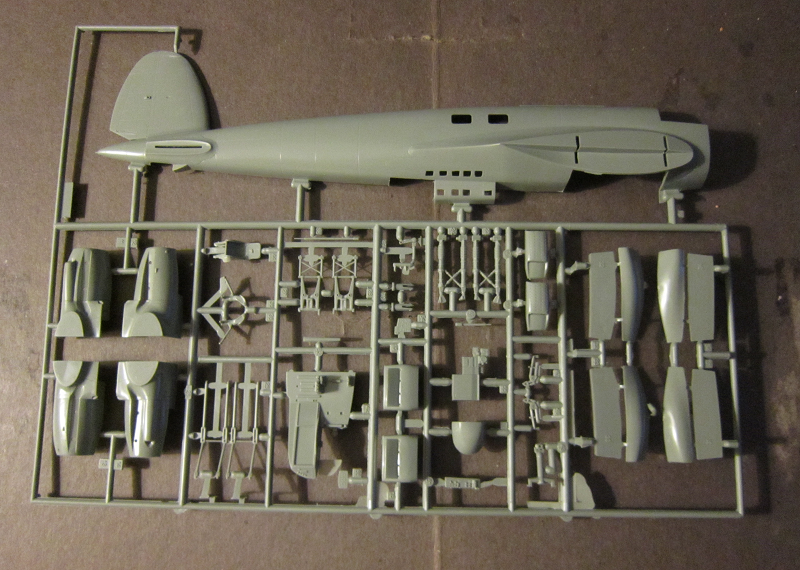 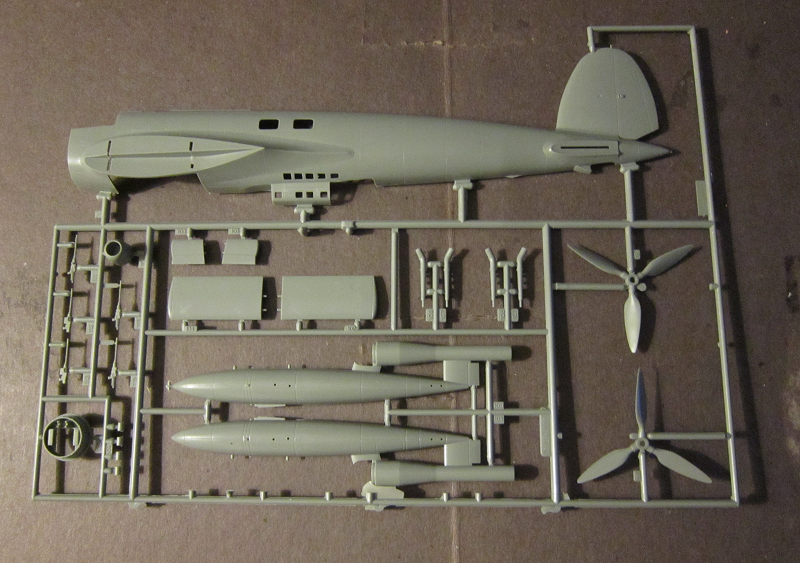 ​The fifth small medium-grey tree holds the seated and the standing crew figures.

The seated pilot figure is divided into full body, with separate right leg and arms.
The standing officer figure is wearing an officer's peaked hat, jack boots and is carrying a brief case. He is full bodied with separate arms.

This tree has a tab on it saying letter A. However, this is not used in the instructions. (8 parts) 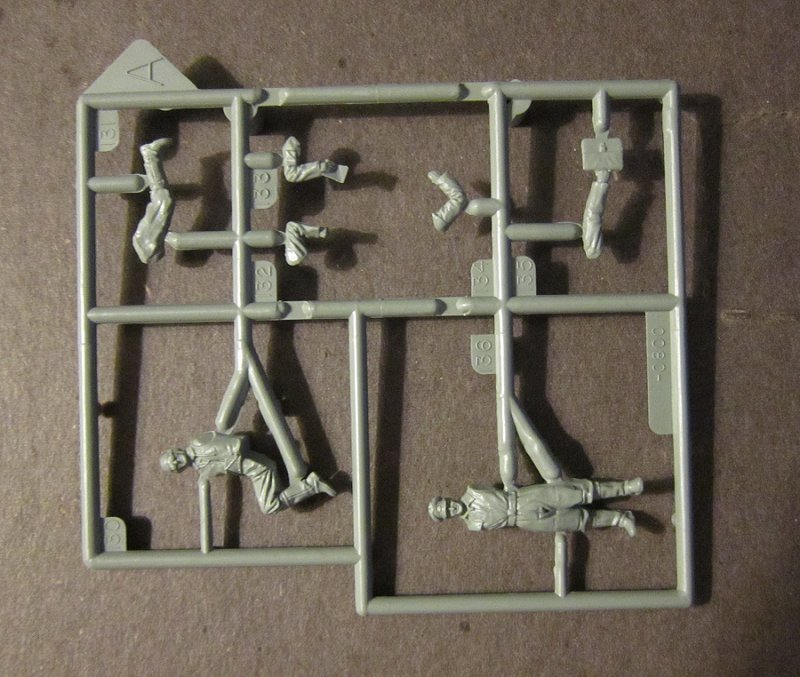 ​The sixth small medium-grey tree is labeled as tree B. It holds the third crew member, the bombardier, the V-1 wing mount, and a base place for the figure. He is in his flight suit  and divided into upper and lower body and a separate right arm. (5 parts) 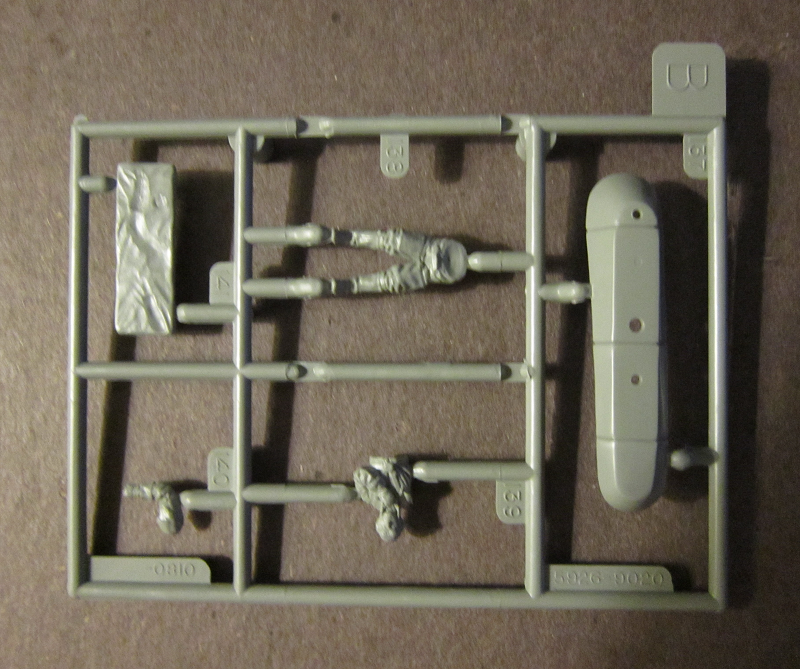 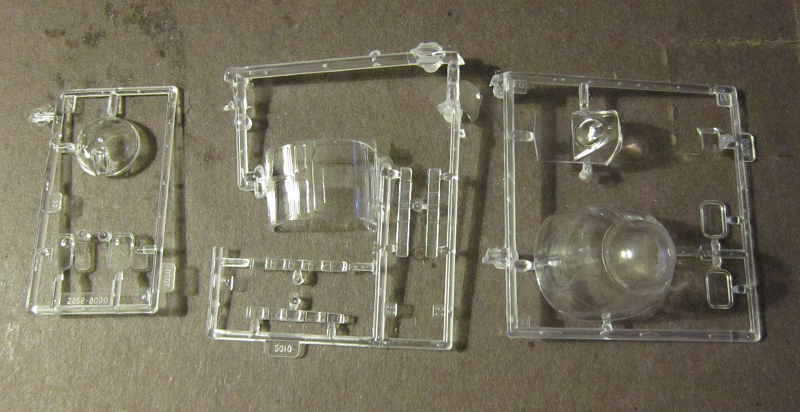 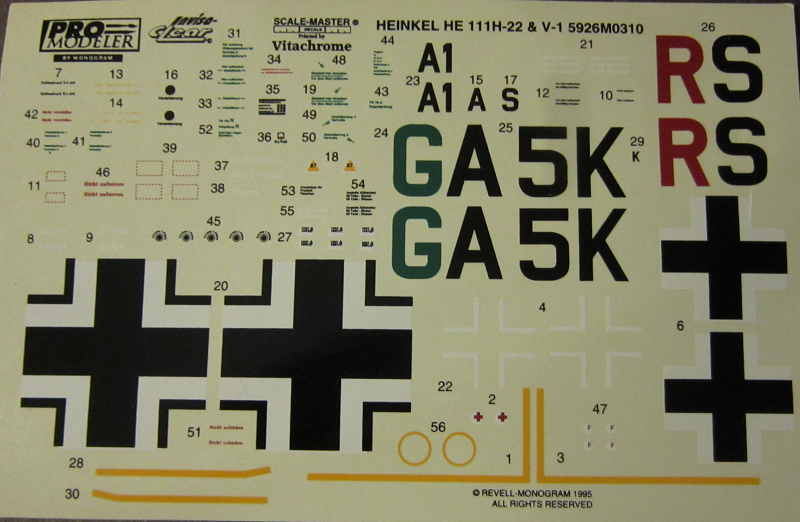 ​This kit has a lot of interior detail. However, I doubt there will be much to see of it after the model is assembled.

As said earlier, the decal sheet does not include swastikas. It is printed by Vitachrome and has many stencil marking on it. It completes the kit's contents.
Detail is engraved. All flaps are molded solid.