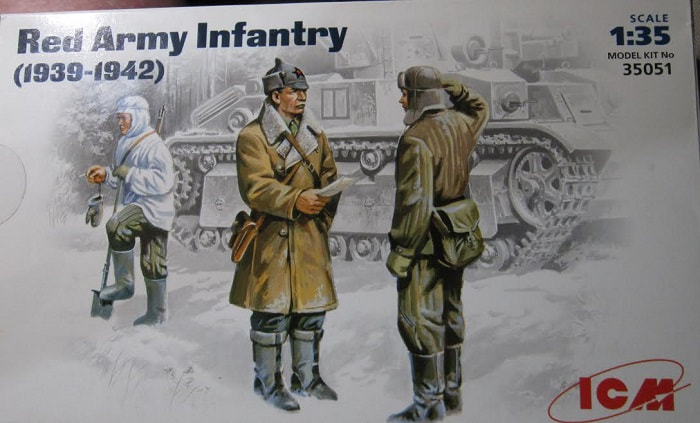 OUT OF PRODUCTION
​THE KIT:

ICM is a model company based in Kviv, Ukraine.

This kit came in a end-opening type box that is not shrink-wrapped, but held shut with with 2 circles of tape.

I am no fan of this type of box, because invariably parts of the decal will find their way past one of the end flaps to become lost forever. Give me a tray and lid type box any day of the week.

This box is very very blousy. It is 4" too long and has a 1" void above the parts tree.

The box art shows 3 Soviet infantrymen out in the snow in beside a T-35 in the background.

One infantryman is using a shovel. He is dressed in a white parka with a hood over khaki pants that are tucked into the tops of fur boots. He has a rifle slung on his back. He has a cigarete in his right hand and his glove is dangling from that hand from a strap.

The second figure is wearing a fur-lined great coat, his khaki pants also are tucked into the tops of fur-lined boots. He wears a fur hat with earflaps that has a spike on top. He holds some paperwork in his right hand and is talking to the 3rd infantryman. He has a pistol holster on his belt.

The third and final figure is saluting the second figure. He wears a quilted khaki uniform and fur lined boots that have his pants tucked into them. He wears a fur cap with ear covers and has a large sack strung behind him on his belt.

The other side panel says that the kit contains unassembled parts for three figures in 27 parts.

Cement and paint are needed to finish the model as shown are not included. Instruction sheet with drawings included. Kit is suitable for modelers over 10 years of age, but not suitable for children under 3, because the kit may contain small parts and sharp points.

This is followed by MADE IN THE UKRAINE and ICM's P.O. address, telephone and FAX numbers. The kit is distributed by Italeri in Italy and their steet address and web address are provided.

The bottom of the box serves as the painting instructions in full color, with a listing of Humbrol brand paints suggested to use. 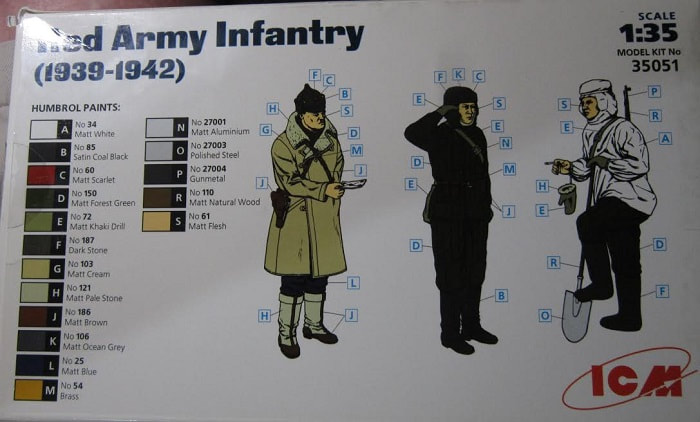 This kit contains one lonely chalk-white tree of parts in a sealed cello bag, instructions and a sheet of IMPORTANT INFORMATION CONCERNING THIS KIT, printed on both sides of it in 20 languages, including English.

The face side has a illustration of the parts tree next to the Humbol paint listing again. This is over CAUTIONS about the kit in 2 languages and ICM's P.O. address and telephone number in Kyiv, Ukraine.

The reverse side is a black and white repeat of the box bottom illustrations.
The lone chalk-white tree holds the 3 figures. 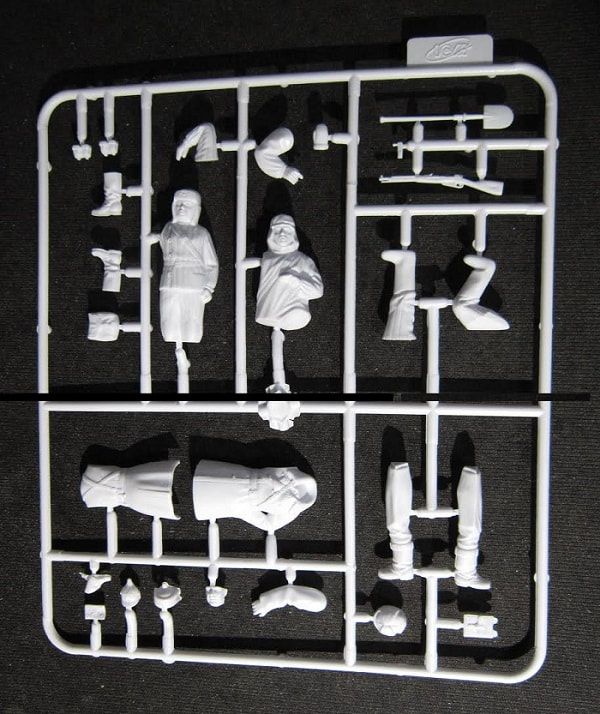 The figure that appears to be an officer is divided into separate front and rear of his torso, head, hat with the spike on top. right arm and legs. (8 parts)

The guy on the shovel is divided into separate upper body. legs and right arm, and hat, with his loose glove (5 parts)

There is a pistol holster, a map case, a spare wool cap, a rifle, a shovel, a leather pouch and ammo cases on this tree bringing parts total on it to 23.

These are nicely detailed figures. However, rather ho-hum poses and not much for your buck in the box.
​Otherwise recommended.