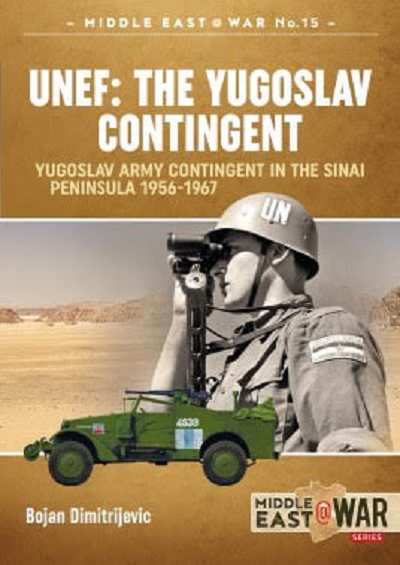 Pursuing a policy of social revolution, national liberation, and non-alignment, Yugoslavia under Josip Broz Tito became involved in the Middle-East in the mid-1950s.

Combined with some interest in economic and military assistance, this involvement found a positive reception among several Arab states, foremost Egypt under General Abdel Nasser.

Close personal ties between Tito and Nasser significantly contributed to the deployment of a contingent from the Yugoslav Popular Army (JNA) within the United Nations Emergency Force (UNEF) in  Egypt, following the Suez War of 1956.

Established in a hurry and deployed to Egypt in late November 1956, the JNA’s part of the UNEF consisted of a reinforced reconnaissance battalion. The unit was manned by conscript soldiers and equipped with vehicles provided by the USA within the frame of the Mutual Defence Assistance Program (MDAP).

The story of the unit’s difficult task of entering the Sinai Peninsula right on the heels of withdrawing Israeli forces is the centerpiece of this book. While warmly welcomed by local inhabitants, through late  1956 and all of 1957, the JNA contingent had the difficult task of reaching the demarcation lines, establishing observation posts, and making sure the cease-fire would be respected by all of the belligerents.

For a force that understood itself to have a national-liberation and  revolutionary role, rather than being an expeditionary military, the Yugoslav Popular Army thus went through a particularly unusual experience.

The mission of the JNA’s contingent with the UNEF on the Sinai came to a sudden end during the crisis leading to the June 1967 Arab-Israeli War. Squeezed between the advancing Israeli forces, it had to be quickly evacuated, leaving all its heavy equipment and vehicles behind.

Prepared with help of the original documentation from a host of archival sources of the former JNA, the book Yugoslav UNEF Contingent focuses foremost on the deployment immediately after the Suez Crisis of 1956. Providing detailed coverage of the much under-reported closing chapter of that conflict. It is illustrated by more than 150 original photographs, most of which have never been published before.

Bojan Dimitrijevic is a historian working as Deputy Director of the Institute for Contemporary History in Belgrade, Serbia. Educated at the University of Belgrade and Novi Sad, CEU Budapest and the University of Bradford, he was the custodian of the Yugoslav Aviation Museum before, in 2004-2009, serving as advisor to the Minister of Defence.

He has researched the military history of the former Yugoslavia, and the Balkans in the Second World War, and diverse conflicts since, and has published over 30 books and 100 scientific articles in Serbia and abroad. This is his second instalment for Hellion’s @ War series.

The cover art shows a photo of a Yugoslav soldier in the foreground with desert terrain behind him. He wears a steel helmet with white UN on it and a shoulder patch with YUGOSLAVIA over the country’s flag. He is looking through a pair of  binoculars.

Below him is a color side profile of a M3A1 scout car. It is overall olive-drab, with white YUGOSLAVIA  followed by the country’s flag on side of the hood. The flag is repeated again on the sides with a white stenciled 4539 above it.

This book will be of interest to both modelers and military historians alike.

I wish to thank Casemate Publishers, the North American distributor of Hellion books. All Hellion titles can be viewed on Casemate’s site at:
www.casematepublishers.com