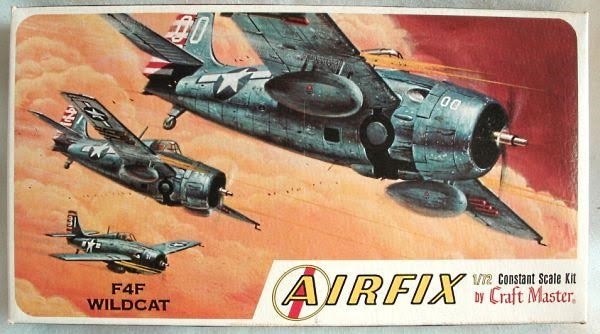 The history of the Wildcat goes back to 1936, when work began on the Grumman XF4F-2 which flew in September of the following year, in competition with a Brewster fighter then being developed for the U.S. Navy. Brewster received the order to go into production and the XF4F-2 was returned to Grumman for further development.

In 1939, a much modified and re-engined Grumman began its test program and proved satisfactory with production beginning in 1940. The Wildcat proved itself a successful shipboard fighter, and in 1940 the F4F-3 was taken over by the British for Fleet Air Arm use.

The Martlet I was the first U.S. aircraft in British service to shoot down a German aircraft, when a Ju-88 was destroyed over Scapa Flow on Christmas Day 1940.

The first U.S. victory with the Wildcat was two days after Pearl Harbor, when land-based fighters of Marine squadron shot down a Japanese bomber. Although slower than a Zero and in many ways outclassed by the Corsair and the later Hellcat, they were always in the thick of the fighting and gave valuable service in operations from the smaller excort carriers.

This kit came in an un-shrink-wrapped tray and lid type box, held shut with tape.
The box art shows three Wildcats flying along. All three are dark Navy blue over gray under carraiges. The all have red and white barber stripes on the rudder flap and star with bars type U.S. insignia. They all carry drop tanks.

The Wildcat in the foreground has the white number 00 over the tail sides and smaller on the sides of its cowling.

The other two have the white numbers 27 and 31 on their rudders.

One side panel has a small color repeat of the box art, followed by the history of the Wildcat.

The other side panel has 3 full color box arts of other aircraft kits that Airfix marketed: a F4U-1D Corsair, a P-40 Warhawk and a Yak-9.

No kit numbers are showed for these 3 and I assume they are all of 1/72nd scale.

This kit contains 2 silver gray trees of parts, and loose silver gray fuselage halves and cowling. There is single clear canopy part. A few parts have broken off the trees. 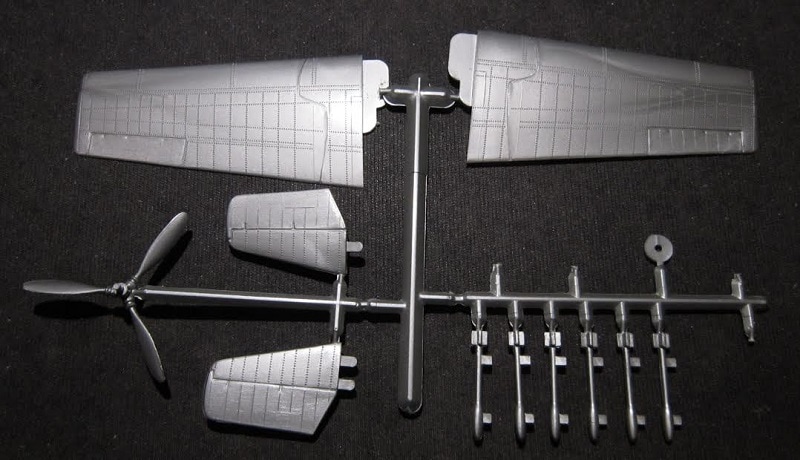 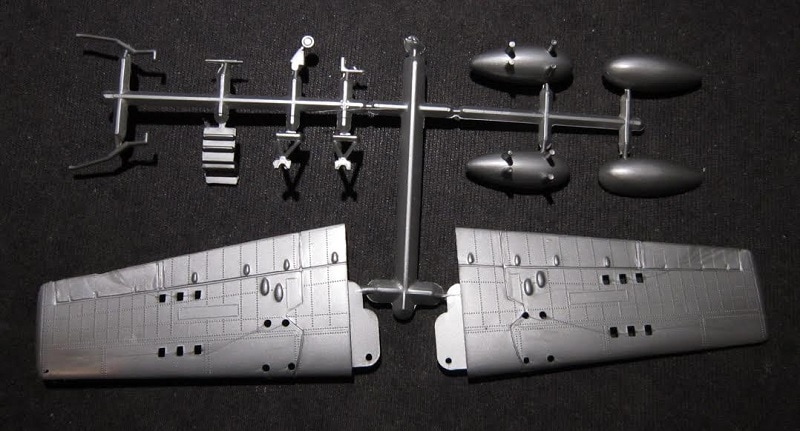 ​Next is the silver gray fuselage halves. 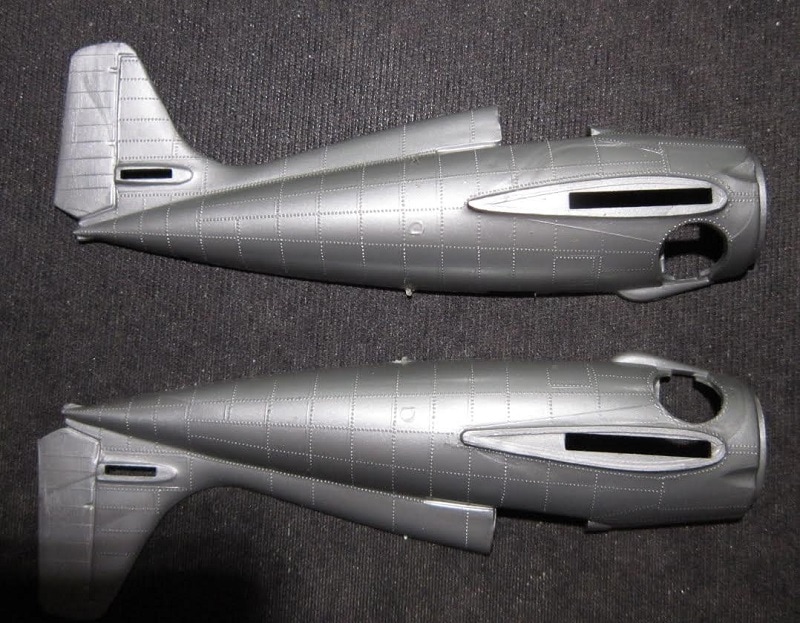 ​A main wheel, the cowling and the pilot figure have broken off one tree and one main wheel is missing from the kit..sigh. Guess it'll have to be built wheels up.
​There is one half of the black display stand in the kit. It is the base plate, but the upper model support arm is missing. Oh well...I never ever used these things anyway. 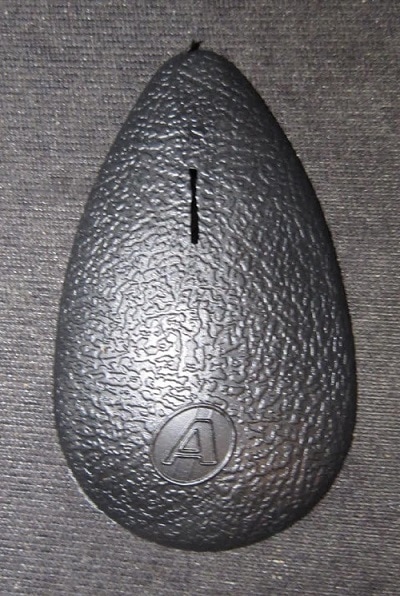 Parts have no number tabs next to them and there are no parts trees illustrations in the instructions. So, care will have to be taken to study the assembly illustrations to get the correct parts needed. Bad move Airfix.

Flaps and rudder are molded solid and the canopy molded shut. It will take surgery to re-position things and open the canopy. Panel lines are of the raised variety. 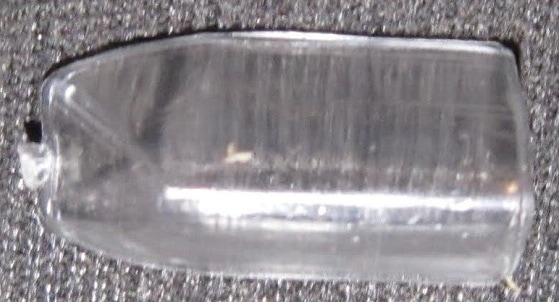 ​The decal sheet is next. No usual frosted sheet to protect the face of it from scratching is provided. 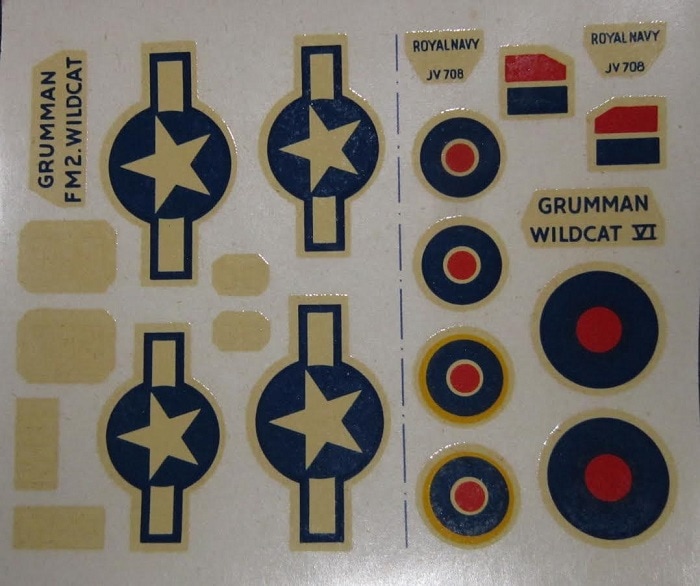 ​The instructions complete the kits contents.

The face side of the instructions begins with the history of the Wildcat followed by the fuselage and wing assembly drawing with text telling you how to proceed. Assemblies are not numbered and the other side of the sheet gives 2 more steps with a lot of text next to them.

The bottom of the page has two very small 3-views for painting and marking schemes.

It is dark green of slate gray wave pattern with sky blue undercarraige. Propeller blades are black with yellow tips.
​This kit is state of the art for the 60's and not all that bad. It can be made presentable in good hands.